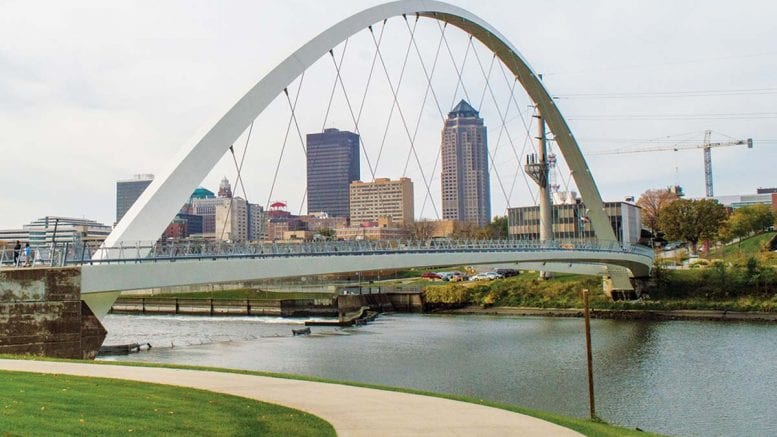 The Des Moines, St. Louis and Kansas City region represents a unique produce market because of its growing diversity. Historically considered mid-America, these Midwestern cities are growing and transforming, according to Brendan Comito, chief operations officer at Capital City Fruit in Norwalk, IA. “Des Moines has double the growth of most regional cities thanks to its affordability, low crime and attractiveness to Millennials,” he says.

As the region experiences growth, its major population centers are diversifying. “For example, 70 languages are spoken in Des Moines Public Schools,” says Comito. “A plethora of ethnic restaurants has emerged over the past 15 years, vastly expanding tastes and exposing native Iowans to many fruits and vegetables they have never experienced before.”

Jimmy DeMatteis, president and chief executive at Des Moines Truck Brokers in Des Moines, IA, describes his town as a good produce environment. “Due to our geographical location, it is virtually at the crossroads of America,” he says. “With the city’s growth, many good restaurants have opened. The popularity of food and self-diagnosed foodies has created a bigger demand for produce diversity.”

The region boasts a number of significant regional and national retailers. “The retail environment is upscale and competitive,” says Nick Conforti, vice president of C&C Produce in Kansas City, MO. “We have Whole Foods, Hy-Vee and Hen House, as well as SunFresh and Aldi. Quality is the biggest criteria. In the old days, someone might sacrifice some quality for a deal, but now it’s all about getting the best quality and best service.”

Regional chain Hy-Vee dominates the Des Moines market with a 34.9% market share according to the Chain Store Guide, followed by Walmart at 17.6% and Fairway at 11.7%. DGS Foods, Sams Club, Costco, Target, Whole Foods, Aldi, Dollar General and Trader Joe’s, among others, divvy the rest of the market up.

In St. Louis, Schnuck Markets controls 23.2% of market share followed closely by Walmart with 20%. Supervalu’s Shop n’ Save (at 11.9%), Dierbergs (at 9.6%) and Sam’s Club (at 7%) are also active players. A retail variety of chains, including Kroger, Costco, Aldi, Target, Dollar General, Save-A-Lot and Trader Joe’s, shares the remainder of the market.

Schnucks is a dominant retail presence in the St. Louis marketplace, says Vince Pupillo, owner of VMP Produce in St. Louis. “They continue to grow having just purchased more stores,” he says. “They support some of the wholesalers here on the market.”

Walmart controls 21.4% of the Kansas City market. Yet, Four B Corporation, with Price Chopper & Hen House banners (at 12.6%), Hy-Vee (at 11.4%) and Cosentino’s (at 11.4%) remain strong competitors. The rest of the market is broken up among many players, including Costco, Sam’s, Target, Aldi, Dollar General, Whole Foods, Sprouts and Save-A-Lot.

Comito notes there are not as many independents in this part of the country as other areas. “Here, we have mostly the regional and national retail chains,” he says. “We are seeing a lot more C-stores get into merchandising produce. The C-stores are the independent grocers of yesterday.”

However, rural Iowa’s independent stores remain crucial to their communities. “These rural independents are strong and growing,” says Petersen. “They fit a certain niche. Rural areas are very different than metro areas. A grocery store in a small town means a lot.”

Farmers markets also thrive in Des Moines. According to Iowa State University, farmers markets in Iowa contribute an estimated $59.4 million in gross sales to the state economy. “We see an increasing interest in locally grown,” says Petersen. “Our large farmers market on Saturday pulls anywhere from 3,000 to 25,000 people depending on time of year.”

Though the stereotype cuisine of this region may be barbecue, the cities offer much more to discover in foodservice. “According to C&C’s Conforti, “We have upscale steakhouses, great seafood and good continental cuisines. Indian and Mexican venues are also growing, as well as Thai or other Asian foods.”

The Kansas City Chamber of Commerce reports the metro area has a very busy restaurant scene, including some James Beard award-winning chefs. According to the Iowa Restaurant Association, there are more than 6,000 eating and drinking establishments in Iowa, two-thirds of which are independently owned.

Between 2012 and 2018 there was a 55% increase in food and beverage sales in Downtown Des Moines as reported by the Greater Des Moines Partnership.

The foodservice industry in St. Louis continues to expand, according to VMP’s Pupillo. “There is a lot of good foodservice business in St. Louis,” he says. “Per capita, we have a pretty ample restaurant scene here.”

Des Moines is a growing city with a trendy vibe, says DeMatteis of Des Moines Truck Brokers. “There are the chains but also some great local restaurant groups,” he says.

Capital City Fruit delivers into a seven-state region, each with its own unique environment and trends. “We are seeing a proliferation of young chefs and creative concepts,” says Comito, of Capital City Fruit. “Locally owned restaurants are popular in Des Moines, while the chains are predominate in the suburbs. The chefs have moved away from the traditional meat and potatoes dishes of the 1970s and 1980s and are really incorporating fresh fruits and vegetables in their menus.”

Conforti concurs on the growth of health-oriented restaurants in the region. “Fresh, healthy and fast is trending,” he says. “It’s vegetarian-style food without necessarily being strict vegetarian. True Food Kitchen that just opened on The Plaza is a good example of this.”

Competition is strong, but businesses customize to continue growth.

Wholesalers in Des Moines, Kansas City and St. Louis remain central in the produce distribution stream for retail, foodservice and other formats. Though the market has changed over the past decade, they continue to seek out their space in it. “It’s competitive, but we’re doing well,” says Vince Pupillo, owner of VMP Produce in St. Louis. “What keeps us competitive is that we’re small and we can maneuver what we have. We can change and adapt easily.”

Buyers in the region take advantage of the wholesalers’ ability to offer freshness and tailored service. “Customers want freshness and customization,” says Pupillo. “We pack what people need, and we pack good quality,” he says. “We take orders and pack daily, so it’s fresh.”

These Midwest wholesalers point to being centrally located as a significant advantage. “We serve a lot of wholesalers going directly into warehouses,” says Nick Conforti, vice president at C&C Produce in Kansas City, MO. “We hit St. Louis and its suburbs, Des Moines, Omaha and Lincoln and down to Wichita.”

Ron Petersen, president of Summertime Potato Company in Des Moines, IA, says the Midwest location allows for easy access to the East Coast, Southeast or Midwest. “Transportation costs are less too,” he says. “There are a number of trucks making deliveries into Des Moines and looking for backhauls, so we have good opportunity to transport products.”

Proximity to growing locations is another plus for the region. “We can throw a team together in California and be here in two days,” says Conforti. “We’re also only about two days from Texas, Florida or Canada.”

Since the region doesn’t have the population base of the coasts, explains Brendan Comito, chief operations officer at Capital City Fruit in Norwalk, IA, there are fewer competitors moving into the market. “But, it also means we have a lower population to sell to,” he says. “We have to fight and scrap for every piece. This has resulted in us being ahead of wholesalers in other regions as we have confronted disruption well before they have to confront it.”

In Des Moines and Kansas City, wholesalers tend to operate their own individual warehouses. In Kansas City, C&C operates from a 2,000-square-foot refrigerated facility. “We bought it in 2003 and have made significant improvements, including state-of-the-art refrigeration, a new roof, dock doors and offices,” says Conforti. “In 2017, we did almost $3 million of renovations on all the offices.” 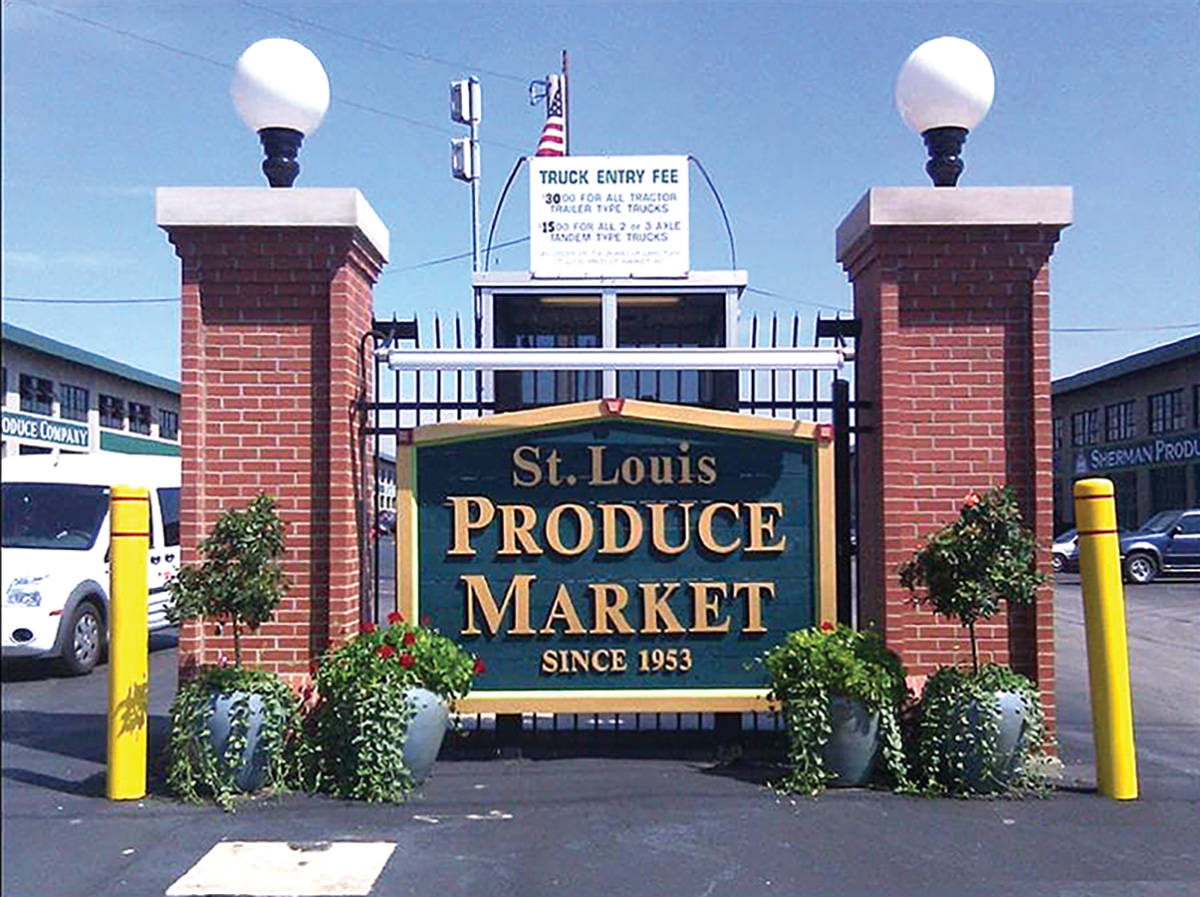 Wholesalers harness regional and national trends, including the move to more packaged product, health awareness and increasing ethnic diversity. “There is increasing demand for packaged produce,” says C&C’s Conforti. “This is driven by the grab-and-go need. At our sister company, processing facility Cool Creations, we’ve been fresh-cut processing for seven years. Demand continues to increase.”

Another trend is the growth of ethnic retail markets. St. Louis retailer Global Foods Market presents a perfect example of how retail serves the region’s diverse cultural populations. The region’s Latino community is growing. Conforti reports C&C has a dedicated buyer/salesperson for the Hispanic market. “He does the buying and selling for this segment and it’s become a good piece of business,” he says. “Logistically it makes sense for us to be primary suppliers for these ethnic markets because we can consolidate everything for them.”

And it doesn’t stop there. “We’ve also had a tremendous influx of Eastern Europeans,” VMP’s Pupillo says. “We have the largest Bosnian population in the country. The growth of such demographic groups is positive for produce.”

Healthy eating also contributes to increasing business. “We are excited about research promoting the nutritional benefits of a plant-based diet,” says Capital City’s Comito. “We want to be on the front lines in making America a healthier country. The challenge is getting the end-user to change life-long habits.”

Still, these wholesalers are challenged to improve. “We know that acting as a traditional wholesaler is a death sentence,” says Comito. “You must innovate, and you must provide value to your customer. If you are merely cross-docking produce, your days are numbered.”

DeMatteis of Des Moines Truck Brokers in Des Moines, IA, points out the value of flexibility and keeping up with the times. “We have become more and more technology driven,” he says. “We can offer better options determined from data than ever before. Our group is extremely focused on perishable transportation; we have been for 50 years and that will continue to be our focus moving forward.”

Wholesalers’ ability to react and the convenience they offer form their competitive formula. “We have an advantageous position in that we’re a one-stop shop,” says Conforti. “We have fresh-cut, our own ripening rooms, a repack facility and millions of dollars of fresh product on hand for short buys. There isn’t any aspect of the produce business we’re not able to handle, and we can react quickly to changes.”

As a transportation provider, Des Moines Truck Brokers plays in volatile market spaces every day. “We are encouraging more dedicated lanes to help our customers drive down their spend,” says DeMatteis. “We are hearing more online purchasing, consolidation and final mile opportunities being discussed.”

Pupillo emphasizes the importance of providing quality and specialized service to customers. “Some of my customers have tried to buy direct but found the investment required doesn’t pay off because they weren’t getting 100 percent what they needed,” he says.

Summertime Potato is evolving by transitioning from a repacker to a grower/packer/shipper, according to Petersen. “We’re in our third year of growing potatoes in Iowa, and we’re offering repack from other growing regions. We source locally and regionally.”