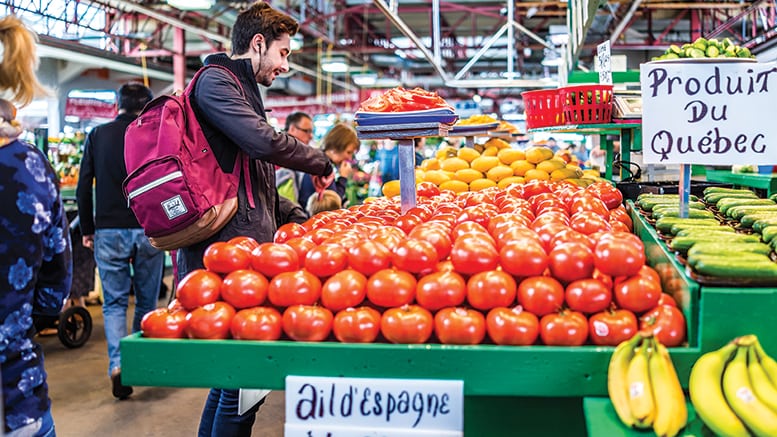 As the second most-populous city in Canada, Montreal’s metro area represents a diverse marketplace of more than four million people and 141 square miles. Maria Cavazos, president of MC Produce, a Montreal-based importer and exporter, says the city’s diversity is more widely distributed than any other Canadian city. “We have a lot of different ethnicities in large amounts,” she says. “Our diversity is spread throughout the metro region; every neighborhood is a wide mix of ethnicities.”

French Canadians are the majority population in Montreal, often said to be the second largest French-speaking city in the world. However, the city has become a destination for many immigrants and is widely considered to be one of North America’s most cosmopolitan cities.

According to Cesare Della Santina, president of Lebeau, Montreal-based CDS Foods, one of Canada’s largest importers of garlic, ginger and shallots, statistics from 2011 show more than 65 percent of Greater Montreal residents speak French as their mother tongue and more than 13 percent claim English. “However, Arabic, Spanish and Italian are also referenced at three percent each, and there are more than 26 other languages noted after that,” he says.

Montreal’s cultural diversity provides a strong foundation for food and produce. “Much of our population finds its roots in the Mediterranean basin,” says Sylvain Mayrand, co-president of Global MJL, a Montreal-based wholesale distributor. “Eating habits are constantly evolving, but there is always a Euro/Mediterranean angle to the fresh produce bought and sold here.”

Della Santina agrees Montreal’s multicultural makeup contributes to a robust food scene. “People here are open and like to try different things,” he says. “Montreal has something for everyone, from our smoked meat and poutine to fine cuisine.”

Montreal’s tourism also contributes to an active food scene as the city adds more than 10 million visitors to its population each year, according to Tourism Montreal. Between tourism and cultural events, Montreal is truly a city that doesn’t sleep, says Cavazos. “It functions 24 hours a day,” she says. “This provides a lot of opportunity. People here try to eat healthy, and they like a lot of produce.”

Mayrand says retail in the region has evolved like the rest of North America. “Consolidation is a fact of life,” he says. “And, large retailers have refined their produce offerings. However, there are still strong independents who seem to be thriving more than ever.”

Montreal’s unique retail dynamic witnesses a more major role for big chains, according to Cavazos. “Provigo (Loblaws), Metro and Sobeys are all large players,” she says. “We have some small independent stores serving different neighborhoods, but the larger chains are more prevalent.”

Della Santina perceives some smaller retailers may be having a harder time competing. “We see the bigger getting bigger,” he says. “There is a lot of growth in the lower-priced retail sector.”

But for some consumers, Mayrand says the cookie-cutter approach of the chains just doesn’t do it. “Also, wide price gaps set some independents apart due to their lower overheads,” he says. “The budget-conscious consumer may be more likely to shop at the independent stores. We have the best of both worlds, depending on the consumer’s buying habits.”

Montreal’s cosmopolitan flair combined with its ethnic diversity make for a panorama of foodservice options. “Ask and you shall receive,” says Mayrand. “From healthy, organic, vegan to carnivore havens … we have it. Chic, trendy bistros are all the rage now.”

Della Santina notes the city boasts a record number of restaurants per capita in North America, according to Tourism Montreal. “There is, of course, debate over this with huge cities like New York and Toronto, but either way, we are majorly up there in our restaurant scene.”

Similar to the retail marketplace, so many discerning consumers result in a competitive restaurant environment. “Foodservice is very competitive,” says Mayrand. “Restaurants that survive in the long-term are the exception.”

Max de la Concha, owner of restaurant Arepera, agrees Montreal’s restaurants are very competitive. “We have many different restaurants of various backgrounds,” he says. “In fact, there are more restaurants than residents. The industry relies on tourists who come from abroad to supplement our regular business. To be successful, a restaurant must stay active year-round, and that is difficult unless you’re offering a very good product. You have to be competitive in price, quality, ambience and service. You must provide the complete package to be successful.”

Though competitive, Montreal’s robust foodservice business presents opportunity for produce. “Wholesalers move a lot because we have high foodservice demand,” says Cavazos. “Foodservice is a huge business here and the reason why we do broccoli and carrots.”