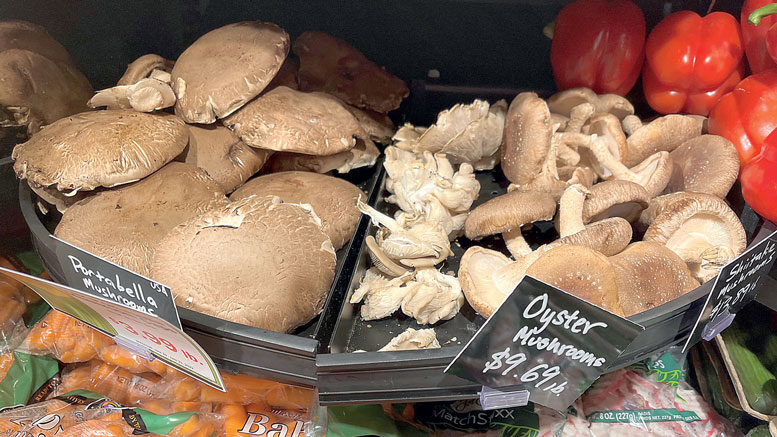 Supermarkets have many opportunities for merchandising mushrooms, which can be marketed as the main focus or in a supportive role.

Raw, sautéed, stuffed or blended: Mushrooms bring versatility and nutrition to the table.

Nutritious and delicious, mushrooms continue to grow in popularity. The global mushroom market reached $58.8 billion in 2021, and is expected to reach $86.5 billion by 2027, giving an annual growth rate of 6.5%, per ResearchandMarket.com. And “champignons” are sustainable, requiring minimal water, space and electricity to grow: One acre of land yields 1 million pounds of mushrooms.

Mushrooms are grown, shipped and distributed nationwide, but Pennsylvania is the main U.S. producer of mushrooms, and grows two-third of mushrooms consumed here. According to the Pennsylvania Department of Agriculture, the state produces over 435 million pounds of mushrooms per year, at an annual value of $440.7 million. Today, the Keystone State is home to third, fourth and fifth generation family-owned mushroom companies.

“We grow mushrooms every day of the year in Pennsylvania and Maryland, and pack them every day except Thanksgiving and Christmas.” says Sean Steller, director of business development at Phillips Mushroom Farms in Kennett Square, PA.

“We changed the name from cremini to Baby Bella because baby vegetables were popular in the 1990s. Now the Baby Bella are extremely successful at retail,” says Steller.

Basciani Foods grows and markets many mushroom varieties, and distributes in the Midwest, Southeast and Western regions. “We don’t distribute in California or Oregon or Washington; it would take too much diesel fuel to get over those Rocky Mountains,” says Fred Recchuiti, general manager at Basciani Foods in Avondale, PA, “and the ones grown in Washington would be fresher anyway.”

The shelf life of a mushroom ranges from three to four days, or seven to 10 days, depending on the variety and the handling. Shipping them quickly helps preserve freshness.

“Our goal is to pack and ship out product within 24 hours from when we harvest it,” says Kevin Delaney, VP sales and marketing for To-Jo Mushrooms in Avondale, PA. “This enables us to maximize the shelf life for our customers.” The fourth-generation company, named after Tony and Joe D’Amico (sons of the founder Joe), delivers from its own trucks to maintain an efficient supply chain.

Because mushrooms are delicate, they have a shorter shelf life than most fruits and vegetables, and retailers should take steps to keep them fresh.

His other tips? “Always store the product at 34 degrees; display mushrooms between 34-38 degrees; always rotate, avoid overstacking, while avoiding spray misters. Entice your customers by keeping the product appealing.”

There are also steps shoppers can take to ensure freshness. “Consumers should take mushrooms home, take them out of the original plastic, and put them in paper bags in the refrigerator for maximum shelf life,” says Recchuiti.

Mushrooms are typically packaged in plastic for retail and commercial, however, some companies are looking into eco-friendly containers, such as wood-based or cardboard.

“But the issue with mushrooms is high humidity,” says Jack Guan, national sales marketing manager for Guan’s Mushroom in Commerce, CA. “Mushrooms are 70% to 80% water, so plastic is the best way to store them.”

Fewer mushrooms are displayed in bulk. According to the research firm 210 Analytics, packaged mushrooms now comprise nearly 95% of all retail mushroom sales.

“While the traditional eight-ounce package is, by far, the largest seller, above-average growth is seen in 16-ounce packages as well as smaller packages,” says Anne-Marie Roerink, retail expert at 210 Analytics. “The latter is due to growth in specialty mushrooms, such as shiitake, maitake, lion’s mane, as well as mixes.”

More than half of sales come from cut or prepared mushrooms (sliced, diced or stuffed).

“Sliced have two days’ less shelf life, but they also have a much higher sell rate, due to the convenience factor. We have seen great demand for new sliced items such as sliced organic mushrooms and sliced shiitake,” says Steller of Phillips Mushroom Farms.

Supermarkets have many opportunities for merchandising this superfood. “Whether there is an in-store campaign on healthy eating, or quick and easy meals, mushrooms can either be marketed as the main focus or in a supportive role,” says Delaney of To-Jo Mushrooms.

Mushroom sales can be increased by creative displays and an understanding of customer habits and preferences.

Giorgio Fresh Co. recommends cross-merchandising “because mushrooms are flexible as a center plate accent, or ingredient meal enhancer,” says Sagan. “You see mushrooms in the meat sections for use in kabobs; located next to peppers, onions and other vegetables for sautés; positioned near the mixed greens and pre-made salads as an ideal complement.”

Local demand and regional preferences can also drive how mushrooms are prepared, displayed and sold.

“We are near Baltimore, the blue crab capital of the East,” says Recchuiti of Basciani Foods. “The East Coast consumers buy mushrooms to stuff with crabmeat, which is more expensive than sausage. In the Midwest, they stuff them with sausage. And they sell them that way at the retail level.

THE BROWN, THE WILD AND THE ORGANIC

White button mushrooms remain popular, but their share is declining in favor of brown mushrooms (portobellos and cremini/Baby Bellas). “The brown mushrooms tend to have a bit longer shelf life, which is good for the retailer and good for the consumer as preventing food waste is high on the radar for both,” says Roerink.

Wild mushrooms are also gaining in popularity. “In addition to the core mushroom items that we produce year-round, we also work with foragers in the Pacific Northwest to bring in seasonal items like chanterelles and morels. Wild mushrooms are slowly moving out of just being a niche item,” says Delaney.

Organic mushrooms comprise about 12% of total dollar mushroom sales. “But mushrooms are on the ’Clean 15’ list of the Environmental Working Group (EWG). They have the lowest amount of pesticides already. So organics are not as essential for mushrooms,” says Recchuiti.

Still, the demand for organic mushrooms is present and growing.

Guan’s Mushrooms, a grower, processor and distributor, is working toward organic certification on its three farms: in Half Moon Bay, Pescadero, and Ventura. “All are on the California coast. We like the temperature there. The hardest thing with growing mushrooms, is keeping the temperature consistent. Year-round, the temperature varies from 50 to 80 degrees,” says Guan.

Mushrooms are currently harvested and packed by hand, but growers are facing shortages of labor, which can drive up the price of mushrooms. The USDA recently awarded a $4 million grant to Penn State’s College of Agricultural Sciences, so its Mushroom Research Facility can research industry automation and potentially help with the labor shortage.

One research objective is to manipulate the crop, in order to better increase manual harvesting speed. This could mean changing how mushrooms mature on the bed. “The tighter the mushrooms are on the bed (i.e., the closer they grow together), the slower and the harder it would be for both manual and automatic harvesting,” says John Pecchia, Ph.D., associate research professor of Plant Pathology and Environmental Biology, and director of the center.

Another objective is to develop a mechanical harvesting system that works efficiently without bruising the mushroom. Engineers on the team are also working on vision sensing, to teach the computer what mushrooms to harvest when.

“We aim to share the end results of our research with mushroom companies, and have a prototype to put on the farm,” Pecchia says.

“The possibilities are endless when it comes to our new Giorgio Kitchen Shredded Portobello Mushrooms. They are available in two distinctive flavors, barbecue and sriracha. These convenient meal solutions can easily be used to create dinnertime favorites such as sandwiches, sliders, tacos, rice bowls or loaded potato toppers,” says Sagan.

When the Mushroom Council worked with Michelle Obama on “Let’s Move” to fight the obesity epidemic, it created burgers made of blended ground beef and 30% chopped mushrooms.

“The news was covering how schools were using pink slime in burgers and tacos. No parent wants their kid eating pink slime,” says Recchuiti of Basciani Foods. The company started “Stealth Health,” a Blended Burger that became a USDA program. Recchuiti says 88% of kids preferred the burger with mushrooms — and that it cut fat, calories and cholesterol by 30%.

This summer, for the second year, the Mushroom Council collaborated with Food Network for the Blended Burger Contest, featuring categories for home cooks and professionals. Over 1,300 contestants vied for the $10,000 prizes. Winners will be announced in late August.

Packed full of vitamins and nutrients, mushrooms are healthy and wholesome, and produce departments can benefit by marketing this to consumers.

“Ongoing research related to the health and medicinal benefits of mushrooms has been very encouraging,” says Sean Steller, director of business development at Phillips Mushroom Farms in Kennett Square, PA.

“Mushrooms are low-calorie, zero fat, and cholesterol free, while delivering vitamins and antioxidants such as selenium and ergothienine (an antioxidant). As consumers are focusing more and more on the quality of food they are consuming, mushrooms are at the top of the list as a great addition to any meal.”

Mushrooms can even be considered a superfood.

“Not only are they rich in immune-supporting nutrients like B vitamins and selenium, they also enhance the flavor of foods they are paired with,” says Kim Bedwell, nutrition communications leader at the Mushroom Council in Redwood City, CA. “When one food can do all those things, it’s definitely super.”

The Linus Pauling Institute at Oregon State University says micronutrients such as selenium, vitamin D and vitamin B are important for supporting a healthy immune system.

“Cremini and portobello mushrooms are both excellent sources of selenium,” Bedwell says.

“According to the What’s New 2021 study by the Southeast Produce Council and 210 Analytics, 54% of consumers want to see nutrition information on produce labels and Datassential found that consumers highly associate Vitamin D with supporting their immune systems,” says Anne-Marie Roerink, retail expert at the research firm 210 Analytics.

Supermarkets can increase sales by promoting mushrooms, which are ideal for keto, vegeterian and flexitarian diets.

“Wegmans showcases a ceiling banner in the produce department showing a medley of mushrooms with the text ‘Mushrooms | B vitamins unlock energy,’” says Roerink. She says Hatfield came out with a blended pork/mushroom taco ground product, and Ingles supermarkets used stuffed mushrooms as “veggie pizzas.”