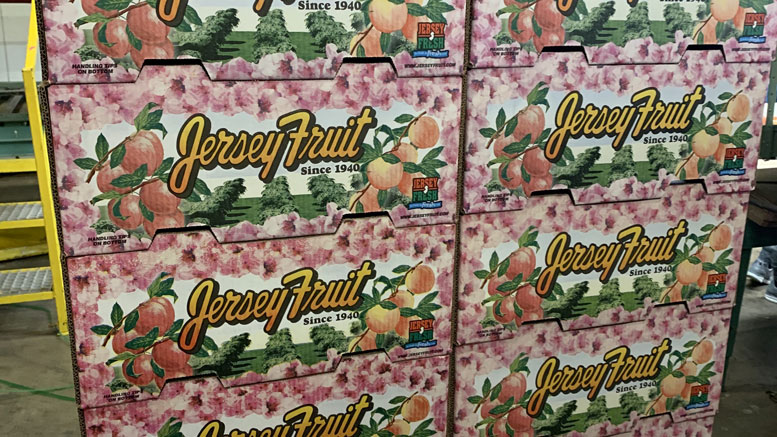 The small state packs a big punch in produce production.

There’s a good reason New Jersey is called the Garden State. This Mid-Atlantic state ranks in the top 10 in the nation in the production of fruit and vegetable crops such as blueberries, tomatoes, bell peppers, eggplant, spinach, cucumbers, squash, peaches, cranberries, sweet corn and asparagus.

What’s more, fresh produce represents a third of the state’s market value of agricultural products sold, specifically 20 percent from vegetables, melons and potatoes, plus 13 percent from fruit, berries and tree nuts, according to the 2020 Profile of Agriculture, published by the U.S. Department of Agriculture’s National Agricultural Statistics Service (NASS). This is amazing, when you consider New Jersey is the 11th most populated state in the nation and ranks the 46th in land area. This juxtaposition offers a strategic advantage to retailers and restaurateurs alike to provide customers with fresh fruits and vegetables.

“We are an agricultural powerhouse that consistently tallies huge production numbers on multitudes of crops, with literally hundreds of varieties to choose from,” says Douglas Fisher, secretary of agriculture for the Trenton, NJ-headquartered New Jersey Department of Agriculture (NJDA). “Our farmers have been working these lands for generations and have amazing multi-generational experiences that manifest their ability to produce the finest products that meet consumer demands for quality and freshness.”

Fisher adds the state’s geography features many different soils and microclimates that lend themselves to specific crops. “For example, where we produce fabulous Jersey blueberries and cranberries is specific to one area in New Jersey, and where we grow greens are remarkably different regions.”

TOP CROPS AND A ONE-STOP-SHOP

New Jersey is home to 9,900 farms covering 750,000 acres, as of June 6, 2021, according to Quick Stats survey data from the USDA NASS NJ field office. The state’s season spans from April with the start of asparagus to late October/early November with cranberries and hard squash such as butternut, acorn and spaghetti.

The retailer uses River Vale, NJ-headquartered Farmlind Produce to broker products from multiple local farms and deliver to its stores twice weekly, Tuesdays and Fridays. In some cases, Lerario says, the product is delivered into stores within 24 hours of being picked. Kings also sources a selection of local fruits and vegetables from its main supplier, West Caldwell, NJ-based FreshPro Food Distributors.

“Most farmers grow multiple items, which helps agriculture make a strong impact on the state’s economy. There are more than 100 different varieties of produce grown in New Jersey,” says Chelsea Consalo, vice president of produce operations for Consalo Family Farms, a vertically integrated grower, packer and shipper in Vineland, NJ, which recently opened a new cold storage and packing facility.

This quantity and quality are readily apparent at the Vineland Produce Auction. This premier Eastern U.S. produce auction, founded over 80 years ago, is situated on 44 acres in Vineland, NJ. There are state-of-the-art cooling facilities, a full-service icehouse, and for many years the auction has operated electronically and remotely rather than in-person, a factor that made it easier to maintain operations during the pandemic.

“We sell through about 6.5 million packages of fresh produce each season,” says Carol DeFoor, office manager. “This is primarily to produce buyers for distributors and brokers who, in turn, sell to chain and independent retailers north and south along the East Coast.”

Beyond auction sales, New Jersey growers use a variety of ways to get their products to customers.

Dandrea Produce, LLC, in Vineland, NJ, owns and operates its own fleet of satellite-tracked straight jobs and full-sized tractor-trailers, according to Peter Dandrea, director of sales.

“We offer just-in-time delivery and can make deliveries same day if needed,” Dandrea says. “Consumers have become much more aware of the benefits of removing mileage from the food supply chain in recent years, including improved eating quality, longer shelf life and decreased carbon footprint.”

Throughout the pandemic, he adds, Dandrea Produce increased its direct store deliveries for its customers as labor and transportation issues posed many challenges for retailers.

New Jersey-grown produce is primarily sold along the East Coast and into Eastern Canada, but some growers are shipping as far west as the Mississippi River, according to the NJDA’s Secretary Fisher. “With increasing freight costs West to East, New Jersey’s logistics network should provide some pricing advantages in the markets we serve. Being on the Eastern Seaboard, we are within a few hours reach of 50 million people.”

VEGETABLES. New Jersey is known for its leafy and other vegetables, says Ricardo Dimarzio, produce sales manager for ACME Markets, a 163-store chain based in Malvern, PA, and a subsidiary of the Albertsons Companies. ACME stores feature local romaine, green and red leaf lettuce, asparagus, corn, herbs, squash, peppers and cucumbers, among other produce, he adds. “Some of the growers we source from are Consalo, Donio and Dandrea, all great New Jersey partners,”

Bell peppers are the state’s leading produce crop, and Sheppard Farms Inc. has nearly 400 acres of bell peppers in cultivation, according to Tom Sheppard, vice president of Sheppard Farms and president of Eastern Fresh Growers, both in Cedarville, NJ. The farm, founded in 1683 by Sheppard’s ancestors, also grows 670 acres of cucumbers, 370 acres of asparagus and 200 acres of sweet corn, and is adding more squash and eggplant to the mix this year, says Sheppard.

Packaged produce has become more popular during the pandemic, according to Bill Nardelli Jr., vice president of sales for Nardelli Bros. Inc./Lake View Farms, in Cedarville, NJ. He says retailers have asked for more tray pack corn that is cleaned and ready to go, and they’re seeing more packaged business for peppers, too.

New Jersey’s demographic makeup has diversified over the past decade with Hispanic and Asian populations each increasing by nearly 20 percent.

FRUITS. “Our growers are outstanding, consistently delivering the best quality stone fruit and blueberries,” says Tom Beaver, director of sales and marketing for Glassboro, NJ-based Sunny Valley International. Sunny Valley is the exclusive marketing and sales agent for the Jersey Fruit Cooperative, the largest and longest-standing grower-owned cooperative in the state. Sunny Valley also markets yellow and white peaches for Larchmont, the largest peach grower in New Jersey by volume, and Gala Farms.

New Jersey is where highbush blueberries were first cultivated, reminds Art Galletta, president of the Atlantic Blueberry Co., in Hammonton, NJ. Galletta is also vice chairman of the NJ Blueberry Cranberry Research Council, and treasurer of the North American Blueberry Council. He says Atlantic is adding the “latest and greatest electronic sorting equipment this year,” and its sales are handled by Naturipe Farms. “Our window of opportunity begins mid-June and runs until August.”

ORGANIC. Organic production and demand are increasing in the Garden State, says Peter Dandrea, whose company currently offers a full line of leafy greens, herbs, lettuces, and radishes. Dandrea adds the farm has been converting acreage into organics for several seasons. “This year, we have expanded our New Jersey organics program significantly by converting over 100 acres of our farm to organic production,” he says. “Even though our organic production is up 35 percent this year, we are still unable to meet the growing demand of the market.”

NICHE & SPECIALTY. New Jersey growers are always looking for ways to innovate and extend their seasons, says Dandrea. For example, his operation uses greenhouses and other controlled environment growing systems “to help get started sooner and finish later each year.”

“One of the products we saw rising in demand, especially during the pandemic when more people were eating at home and looking to lower their risk by purchasing packaged product, was packaged salads that we sourced from local hydroponic growers like AeroFarms in Newark,” says Dara Sblendorio, president of the family-owned company Sunrise ShopRite, which operates the ShopRite of Parsippany and ShopRite of West Caldwell, NJ. Sblendorio is also the first woman chair of the produce committee at the Keasbey, NJ-headquartered Wakefern Food Corporation, a large retail supermarket cooperative.

“This meant we didn’t have to rely on California for packaged salad and, due to the growing method, we had a year-round consistent supply. It’s become a neat niche for us.”

New Jersey’s demographic makeup has diversified over the past decade with Hispanic and Asian populations each increasing by nearly 20 percent, according to 2020 data published by the U.S. Census Bureau.

“New Jersey farmers are good about growing whatever the market demands,” says Vineland Produce Auction’s DeFoor. In recent years, this has included Japanese eggplant, tomatillos, bok choy, cilantro, Napa cabbage, jalapeno and cubanelle peppers and methi, also known as fenugreek. “Some of these things are in large enough quantity to come through the auction, but our farmers have connections and will know who can supply them.”

There’s strong marketing and promotional support behind New Jersey-grown produce from the state level, commodity councils and growers themselves working directly with retailers.

“Local is here to stay, now more than ever. The pandemic has better-educated consumers on the importance of buying local products,” says ACME Markets’ Dimarzio. “We seek information from the NJDA in sourcing out different growers to include in our grower selections. The New Jersey grown insignia is used in our print and digital promotional publications.”

“Our marketing campaigns target specific audiences and specific produce as it comes into season,” says NJDA’s Secretary Fisher. “Retailers have access to the Jersey Fresh logo to incorporate into their own displays, signage, menus and advertisements so their customers know they support Jersey Fresh products.”

The NJ Blueberry Industry Advisory Council is setting up a billboard campaign, social media promotions and trade ads that emphasizes local Jersey Fresh blueberries. Similarly, the NJ Peach Promotion Council will do radio advertising and electronic billboard advertising and offers recyclable peach bags, akin to tote bags for apples, that retailers can use at point-of-purchase displays.

“Meeting Pegi Adams of the NJ Peach Promotion Council at the New York Produce Show enabled us to meet growers in the southern part of the state and source their peaches for our stores,” says Sunrise ShopRite’s Sblendorio, who has long sourced from local growers such as Tranquility Farms, in Andover, NJ, about 30 miles from her family’s stores, as well as the Wakefern warehouse, for produce. Starting around the Fourth of July, the retailer sets up dedicated farmstand-like displays that present 12-foot or more of New Jersey grown produce.

Likewise at ACME and Kings Food Markets, each store creates dedicated local grown signed displays. Some stores build this display outside at the front of the store if local jurisdictions allow, says ACME’s Dimarzio.

It’s not just the produce department, but the whole store that gets into the Jersey-grown spirit at the Sblendorio family’s two ShopRite stores. “For example, if peaches are in, we’ll showcase them in produce and the bakery will make desserts with them too. We have a well-developed catering program and call out Jersey Fresh, whether it be local tomato or corn salad — anything to remind customers that they’re in the Garden State.