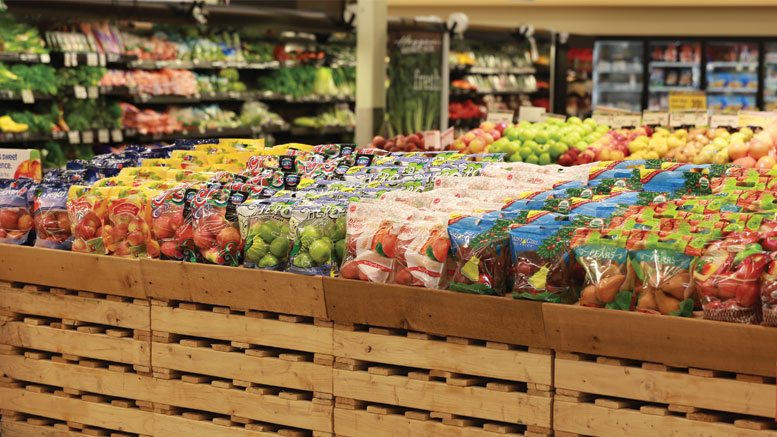 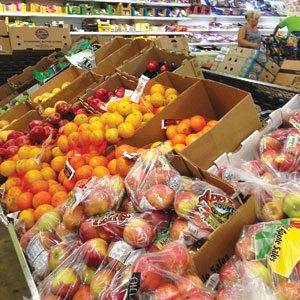 While New York apple growers are waiting hopefully for the next Honeycrisp, they are (like their counterparts in most of the country) already ramping up acreage of two new varieties developed for them by Cornell University.

This will be the first year SnapDragon and RubyFrost, two varieties developed at the New York State Agricultural Experiment Station by Cornell breeder Susan Brown, will be available in significant volumes.

Tim Mansfield, director of sales and marketing at Sun Orchard Fruit Company, Burt, NY, says these two new varieties are just coming into larger production. “They’re kind of a club thing. Crunch Time is a group of apple growers in New York who can grow them [SnapDragon and RubyFrost]. Only New York growers can grow them, and only specified packers can ship them.”

Sun Orchard Fruit is a fourth-generation family firm shipping a half million cartons of the most popular Eastern apple varieties a year grown by 40 growers in the Lake Ontario fruit plain in western New York.

Brown expects RubyFrost, which ripens later in the fall and stores well, will be popular with fans of Empire and Granny Smith.

SnapDragon has a spicy-sweet flavor and gets its juicy crispness from its Honeycrisp parent.

New York Apple Sales is the largest shipper in the state, handling more than a third of the entire crop from growers in every region of the state.

Many of the new apple varieties coming to market from New York orchards are, like SnapDragon, descended from Honeycrisp.

“We have the Pazazz,” says Mansfield. “We had our first limited release in the Buffalo area last year, and we’ll have more volume this year. We’re still learning about this apple.”

The Pazazz is a cross between Honeycrisp and an unknown second parent that came about pretty much by accident.

“Consumers are making more informed decisions at the shelf — we call it a ‘purposeful purchase,’ and an easy way to feel confident of making good choices is to support local whenever possible.”

“Thousands of Honeycrisp seeds hit the ground, and one of the trees had an apple that’s very special,” says Mansfield. “It is more flavorful than Honeycrisp and has more acid, which contributes to the flavor. It harvests later and holds flavor longer than Honeycrisp. When you first pick it, it has too much acid. You have to wait three or four weeks to eat it.”

Pazazz was first developed by Doug Shefelbine, owner of Shefelbine Orchard and a Wisconsin grower for Honeycrisp creator Honeybear, from the large collection of seedlings he regularly plants next to the orchard, he grows Honeycrisp for cider.

Honeybear expects to ship 30,000 cases of Pazazz this year, 125,000 the next year, and then 350,000 the following year, and will be sampling at major supermarkets including Publix, Hy-Vee, Coborn’s, Wegmans, Kroger, H-E-B, Smith’s, Fry’s, QFC, King Soopers, Cub Foods and Loblaws.

The normal harvest slot for Pazazz is late September or early October, according to Mansfield of Sun Orchard.

Another new Honeycrisp variety was discovered by Wabash, IN-grower David Doud, owner of David Doud’s Countyline Orchard, who was delighted by the crisp sweetness he enjoyed when he sampled fruit from a seedling in his cider orchard.

This tasty stranger turned out to be a Honeycrisp/Fuji cross, since named Evercrisp, that is beginning to gain favor.

“A fair amount of Evercrisp is being planted, and there are managed varieties that we don’t get involved in at the association,” says Allen of New York Apple Association.

Another new variety will be a New Zealand apple having its first-ever U.S. harvest this year.

“We are a cooperative with a few growers in Washington and about 15 in New York to grow Koru, a New Zealand variety,” says Byrne of New York Apple Sales. “We will have our first domestic-grown Koru this fall.”

The Koru, a cross between Braeburn and Fuji, was first discovered by Geoff Plunkett in the rose garden next to his orchard in Nelson, New Zealand, according to Byrne.

Harvest is just the beginning of the challenge of introducing new and interesting apple varieties, as it takes time, money, imagination and produce department shelf space to build a consumer base.

“It’s extremely difficult to introduce a new variety, because there’s limited real estate in the produce department,” says Byrne. “You need advertising, social media and a branding program; but at the end of the day, you need a great product.”

Most shippers continue to offer ample supplies of familiar apples as they work in some of their newer varieties.

“It’s extremely difficult to introduce a new variety, because there’s limited real estate in the produce department. You need advertising, social media and a branding program; but at the end of the day, you need a great product.” 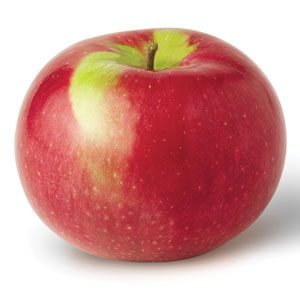 “We are continuing with McIntosh, Empire and Cortland while transitioning to newer varieties that have more crunch — more density to the flesh,” says Byrne. “Density has replaced flavor as the first test point. If it doesn’t have a crunch, people won’t buy it a second time.”

One New York favorite remains very popular more than a century after it was first introduced. “McIntosh is still the 10th most popular variety in the country after 120 years,” says Byrne.

At Sun Orchard, Empire and Gala are the Top 2 producers and, according to Mansfield, both are near the top in popularity among New York apples in general.

“The Northeast is a big market for New York apples,” says Mansfield. “The McIntosh and Empire are the favorite varieties, and we grow a good Gala.”

The New York Apple Association manages promotional programs for apples and apple products from throughout the state.

A New Way Of Talking

The New York Apple Association produces promotional fliers as part of its promotional campaign, but Internet advertising is on the rise because it offers tremendous advantages.

The digital approach is augmenting more traditional methods of merchandising New York apples, rather than replacing them entirely.

“We are going to follow our normal merchandising program this year,” says Allen. “We will have in-store demos, stepped up digital coupons, and online advertising.”

Proximity to the largest urban centers in the country makes New York apple growers well positioned to benefit from the desire to buy local.

“The ‘buy local’ movement is very important, because we are close to such a massive population,” says Allen.

Over the course of many decades, New York apples developed a brand desired in at least half the country.

“We ship mostly east of the Mississippi,” says Dave Williams, vice president for sales and marketing at Fowler Farms, Wolcott, NY. “The New York name helps [sales] everywhere from Texas through Chicago and east. We have a little different taste than Washington because of the weather. We may have a little higher brix with some varieties.”

Fowler Farms has grown apples for more than a century and a half in the region influenced by nearby Lake Ontario.

New York seems to have fully recovered from the hailstorms that destroyed half the crop in 2012 and damaged much of the fruit that could be harvested.

“Volume-wise, we recovered completely from the frost,” says Mansfield. “There’s always concern if the trees were damaged. It looks like we’re going to have a good crop this year with good volume and quality.”

Growers have, in fact, set an apple harvest record since the year of the disastrous
hailstorms.

“We are back and exceeded pre-freeze levels last year with 32 million bushels,” says Allen. “We’ll see this year. We’re looking at a nice decent crop. There were just a few areas with frost, but we really need some rain.”

“We had such a good year for the yield of McIntosh last year, but that’s cyclical,” says Williams.

Aside from some localized frost early in the year, the only question about the 2016 harvest is whether there will be enough rain to properly size the fruit.

“It’s dry,” says Williams. “There was some freeze back in February. We made out pretty well because we’re near Lake Ontario, but we need more rain.

They are the fruit that is a bit too small, a touch too large, or banged up just enough to not quite fit our preconceived notion of how an apple is supposed to look.

Rather than consign these ugly ducklings from the harvest to the compost bin, New York growers squeeze from them cider that has earned its own fine reputation.

“In apples, unlike oranges, we don’t grow juice apples, they are complete waste stream that are culls off lines, picked in orchards last,” says Kelli Foster, director of marketing at Red Jacket Orchards, Geneva, NY. “So a healthy juice market does keep the fresh apple market healthy.”

Although the apples are not grown with the intent of being squeezed, they do bring a distinctive New York cider flavor that comes from the soils and climate.

“Our soils, rich from glacial activity and high in humus [a dark-brown or black organic substance made up of decayed plant or animal matter], tend to give us fruit with more pronounced acid levels,” says Foster. “It is this acid, for apples malic acid, that balances with the sugars of the fruit to give full bodied, ‘zingy’ flavor. Without it, just a sweet apple is a flat flavor.”

There may not be cider varieties, per se, but there is an art to divining mixes of varieties that will make for distinctively delicious ciders.

“When it’s 100 percent apples, the varieties matter 100 percent because of the balance of acid/brix/tannins,” says Foster.

Some New York apple growers take to producing cider that comes from a single, distinctive and delicious variety.

“We do Fuji, Honeycrisp and SweeTango; those are our three varietal apple ciders,” says Dave Williams, vice president for sales and marketing at Fowler Farms, Wolcott, NY. “We don’t add any concentrate or other juice.”

For the rest, Fowler mixes apples of numerous varieties into a blend that changes a bit every year.

“There’s the traditional cider that is a blend of different varieties,” says Williams. “We cannot say exactly what the blend is because it changes. There are some people who like the traditional, but the varietals are showing the greatest growth.”

Like Red Jacket, Fowler Farms uses its cider program to make sure that no apple, no matter how homely, goes to waste.

Foster expects the volume of juice from Red Jacket to be up 25 percent this year and advises retailers to give their customers a taste.

“Sample it … people can’t resist flavor,” she says. “And it’s increasingly important to educate the consumer at the point of purchase. There is one ingredient in our All Natural Apple Cider: Apples! Simple, fresh, ingredients with nothing added is something we’re proud of, so we shout it out loud whenever we can.”

There is in the cider, as in the apples, a distinctive New York flavor that educated consumers crave.

“Consumers are making more informed decisions at the shelf — we call it a ‘purposeful purchase,’ and an easy way to feel confident of making good choices is to support local whenever possible,” says Foster. “That certainly helps us in the apple arena, since we believe New York apples are among the best in the country.”