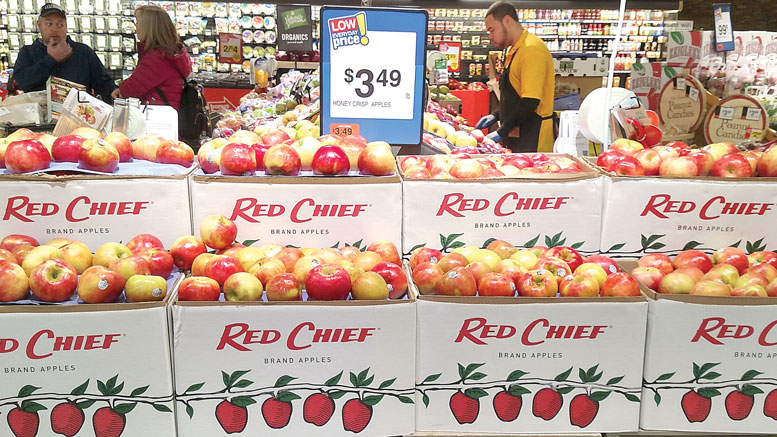 Retailers have more than 25 commercial varieties to choose from.

When retailers stock fresh apples for eating, cooking and baking, they may recall the time when selection was heavily skewed toward Red Delicious and McIntosh. This was before the arrival of scrumptious new varieties, such as Empire, Fuji and Pink Lady.

Today, New York apple growers, distributors and marketers are happy to produce and promote new varieties of apples. Varieties such as Snapdragon, SweeTango, Pazzazz and Zesta! are popular. Several of these apple varieties were developed by universities, and come with licensing agreements and royalty payments. Life may have been simpler in the days of Red Delicious, but it also meant choices were limited and crunch opportunities were fewer.

“September through December is when customers are in the mood for apples,” says Brian Kenny, category manager for produce at Wakefern Food Corp. in Elizabeth, NJ. “In the fall, when the weather starts getting a little cooler and school starts, you see apple picking going on, apple displays going up, and apple cider all around.”

New York’s Cornell University bred two new apple varieties through cross-pollination: RubyFrost and SnapDragon. These apples, which grow well in upstate New York, come with exclusive licensing agreements and royalty payments. Crunch Time Apple Growers — located in Lockport, NY, the heart of apple country — is the exclusive marketer for these two varieties, and has 150 growers who produce them.

“For us, Snapdragon is a little more popular than RubyFrost,” says Jessica Wells, executive director of Crunch Time. “It is the profile most customers want — it is sweet, juicy, and crisp. SnapDragon is a red apple known for its monster crunch.”

At Hudson River Fruit Distributors in Milton, NY, Honeycrisp and Gala are the most popular apples, says Alisha Albinder Camac, owner/operator, although varieties like Fuji, Snapdragon and Pink Lady are growing in volume. Camac is the fourth generation in the family-owned business of New York apple growers, packers and shippers. Hudson River Fruit also represents over 70 growers in New York and New England.

More than 600 New York orchards produce apples and, after Washington state, New York is the second largest apple producer in the U.S.

“We’ve had a lot of rain, which affects fruit size positively, and it’s turning cooler, which will impact color. The weather is lining up perfectly for a beautiful crop with a strong color and size,” says Camac.

According to the NYAA, the 2021 New York State apple crop will feature a range of sizes of high-quality fruit, and volume in the range of 29 to 30 million bushels.

“Probably 16 to 18 million go fresh, and are packed and shipped over the course of the marketing season (to wholesalers and retailers),” says Tim Mansfield, director of sales and marketing at Sun Orchard Fruit Company in Burt, NY. “The rest are sold at fruit stands, roadside stands, or processed into apple products: sauce and juice and cider.”

The fertile soils and plentiful moisture at Lake Ontario and the Hudson River Valley make for high quality New York-grown apples. Rainfall is abundant and irrigation unnecessary. The apple colors, sugars and acid develop well, and a number of apple varieties blossom there.

“Being on Lake Ontario is a buffer for us,” says Austin Fowler, vice president, sales and marketing at Fowler Farms in Wolcott, NY. “In spring, the weather is very cold, which delays the blossom and maturity of the fruit. The apple stays dormant longer and the tree is much more hardy. Having the lake and the glacial soils makes for one of the most consistent crops grown.”

Fowler Farms is a large East Coast grower, packer and marketer. It grows over 22 apple varieties, including Cortland, Evercrisp and Macoun. The farm is licensed to grow RubyFrost, SnapDragon, Zestar! and SweeTango.
Apples in New York are harvested from August through October/November, depending on variety. Some are sold fresh, while other apples are put in controlled atmosphere rooms (low oxygen rooms) until they are ready to be distributed, which can be all the way up to next year’s harvest begins.

“Once SweeTango comes in, you are hard pressed to find another variety that sells so well off the shelf. We have availability from September 1 through the end of February, then domestic SweeTango is gone,” says Jennifer Parkhill, executive director of Next Big Thing in Lake City, MN.

Next Big Thing exclusively grows, markets and sells SweeTango, a managed variety. Its 60-member consortium has 16 New York growers who pay royalties to the University of Minnesota, which developed the apple as a cross between Zestar! and Honeycrisp.

The SweeTango apple is red with a yellow blush. The high number of lenticels (pores in the skin) makes it sweet, and large cells in the flesh make it crispy. It grows well in the Lake Ontario region. “The latitude offers great conditions — the soil, the water, the amount of moisture,” says Parkhill.

When it comes to New York apple production, farmers, packers and shippers aim to improve their operations, and pay attention to emerging trends.

For example, Sun Orchard Fruit Company installed a new packing line, the MAF sizer, which Mansfield says lets it be more effective and efficient. “This new piece of equipment helps us bring to market a consistent high quality piece of fruit.”

Mansfield believes more and more New York apples will sell fresh (not processed), because the cost of developing an orchard has dramatically increased. “The density has gone from 150 trees per acre to 1,500 to 2,500 trees per acre. When you put that many trees to an acre, you have to create a trellis system to allow the trees to grow,” he says.

Fowler Farms has high-density orchards at 2,200 trees per acre, and builds trellises from locust trees grown on its own nursery. The farm limits apple tree height to 8 feet. “This is because you want a fruiting wall, so all apples are exposed to the sun. That way, you will have a higher level of quality fruit,” explains Fowler.

Because their tree spacing is narrow, the farm created an automated harvest platform, which contains apple bins and travels along like a motorized picnic table. “You have to get your feet dirty, go out into the field, and figure out how to grow apples differently,” says Fowler.

Fowler watches New York apple market trends, and says Evercrisp is an emerging variety, as is Ludacrisp. “We’ll have a small supply, but it may just go to local stores to get feedback. Millennials seem to like these names,” says Fowler.

Sun Orchard Fruit Company ships Pazazz, an open pollinated cross of Honeycrisp. It is harvested in New York in early October, and Mansfield says it maintains its flavor into the following September. It tastes both sweet and tart, and has juiciness, crispness and crunch.

“Sometimes you bite into an apple and the flavor is all there and disappears rapidly as you chew. With the Pazazz, the flavor continues to develop through that bite; it appears the whole way through when you chew, and beyond,” says Mansfield.

The NYAA has a portfolio of multimedia offerings to boost New York apple sales, including photo galleries and how-to recipe recordings. This year, it’ll focus on grower stories as well as New York apple varieties, flavors and nutritional benefits — to encourage customers to buy.

“At Hudson River, we continue to market the apple varieties that customers want — the new varieties coming to market. We make sure growers are planting the right varieties, the ones that are popular and trending up,” says Camac.

New York Apple Sales is a diversified apple grower and marketer that offers over 20 apple varieties, including Koru, which it calls a game-changer for charcuterie boards, and Rave, which it says has a zippy flavor. It introduced Koru to the market in 2015. New York Apple Sales recently launched Yes! Apples in order to share its passion for apples directly with customers.

“We’re using our digital marketing channels, including social media such as Instagram, to highlight the health benefits of apples, to share out-of-the-box recipes to get consumers thinking about using apples in new ways, and to reinvigorate the consumer about apples,” says Kaari Stannard, owner and president of New York Apple Sales, Glenmont, NY.

Distributors and marketers use geofencing on social media to advise customers what stores near their homes carry what varieties. But there are also lighter, more fun ways to increase sales.

“We started doing business with a lot of influencers — such as the The Produce Moms, who will promote New York apples,” says Parkhill of Next Big Thing. The company also provides retailers with SweeTango display bins, shelf toppers and rail cards.

“This summer, one of our growers did Facebook live from the orchard, so consumers could see how things looks from there,” says Wells of Crunch Time Apple Growers. To promote the versatility and flavor of SnapDragon and RubyFrost, the company publishes The Daily Apple cookbook, which has recipes ranging from apple spice cake to roast chicken with apples, onions and sage.

Given the interest in sustainable packaging, NYAA is rolling out a new, high-graphic tote. The reusable white tote bags are made of paper, have a green leaf border at the bottom, and include banners that read ‘Orchard-Grown Goodness’ and ‘Juicy–Flavorful–Fresh.’ They can be a stand-alone piece, or a companion to NYAA display shippers and tri-wall orchard bins.

Crunch Time Apple Growers offers retailers a colorful, graphic base for apple bags, and is creating a new RubyFrost logo to strengthen the product. “In New York, we don’t necessarily want to focus on the frost, so the logo will focus less on the snowflakes and more on the ruby jewel part. Because it is a beautiful red apple,” says Wells. 