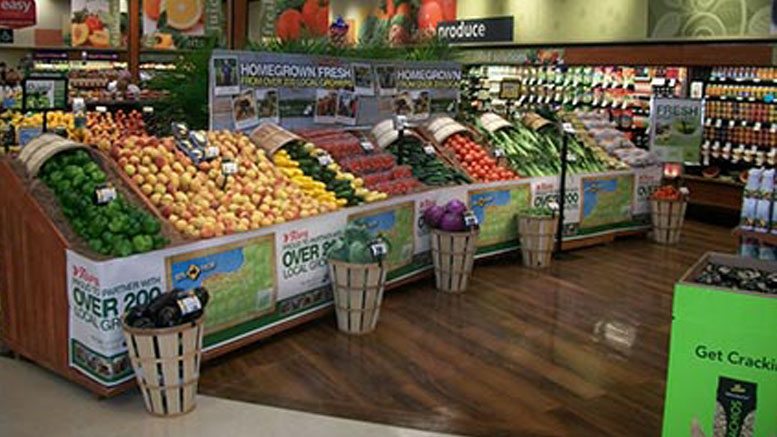 Think of New York and the bright lights of Broadway come to mind. Yet, it’s this mid-Atlantic state’s reputation for quality agriculture that pre-dates its star-studded reputation by more than 300 years. In 1870, New York boasted the largest number of farms in the nation, according to the New York History of Agriculture, an essay published by Cornell University’s Albert R. Mann Library. By 2012, data from the Albany, NY-based New York State Department of Agriculture & Markets (NYSDA&M) shows agriculture contributed more than $5.7 billion to the state’s economy. Of this, vegetables provided $450 million, which ranks New York fifth in the nation in fresh market vegetable production.

“We carry a minimum of 150 SKUs of New York-grown fruits and vegetables in season,” says Steve Wright, director of produce and floral for Tops Markets LLC, a 159-store chain headquartered in Williamsville, NY. “This includes vegetables such as summer and winter squash , leafy greens, tomatoes, all kinds of peppers, just to name a few.”

New York flourishes with natural resources ideal for agriculture. “There are a variety of productive soil types in the state,” explains NYSDA&M Commissioner, Richard A. Ball, who himself is a vegetable grower and owner/operator of Schoharie Valley Farms, in Schoharie, NY. “One is what we call black dirt, which is rich in organic material. There’s a second type high in mineral content. Both are well suited for a wide range of crop production. Like any industry, our farmers understand their soil and what will grow best. In addition, we are blessed with normal and adequate rainfall, as well as abundant ground water.”

The state’s farmers complement these raw materials with the latest technology. “We have GPS on our tractors to maximize the efficiency of the land when planting, and have a tighter use on fertilizer,” says Shannon Kyle, in sales and marketing at Torrey Farms, Inc., in Elba, NY, and one of the family’s twelth generations to work on the 200-plus-year-old farm that now encompasses some 10,000 acres. “Although, harvest still needs to be done by hand to get product at its peak quality.”

Eden Valley Growers, a 58-year-old cooperative in Eden, NY, with 10 members farming 1,200 acres, some of whom have been farming for 150 years, has invested in a slush ice machine this season in order to ship broccoli and kale at top-quality. Over the last decade, the company had added a hydro-cooler and a forced air cooler to complement its vacuum cooling facilities. Eden Valley also opened 8,000-square feet of additional cooler space, essentially doubling its current capacity.

“We are looking at wind and solar energy in the future,” says Dave Walczak, sales and operations manager. One of the latest technologies some growers have employed is the use of high tunnels to extend New York’s growing season. The impetus has come thanks to grants awarded as part of the Seasonal High Tunnel Initiative. This is a voluntary program offered by the National Resources Conservation Service, headquartered in Washington, D.C., which provides financial and technical support to help producers extend the season, especially on high-value crops.

“Farmers are looking at output per foot rather than output per acre and how they can increase their return on investment,” explains Robert Hadad, the Lockport, NY-based extension vegetable specialist for Cornell University’s Cooperative Extension Services’ Vegetable Program. “Tomatoes, cucumbers and greens are crops we’re seeing in these tunnels. Farmers can get a jump-start in the spring and start new transplants as early as February. Then, in the fall and winter they can keep crops like radicchio, fennel and hearty greens such as kale and chard because the tunnels at this time act like a big cooler. We’re especially seeing success with tunnel crops like baby cucumbers because retailers are putting them in a six-pack Styrofoam tray with shrink wrap and promoting them.”

The New York vegetable harvest customarily starts with crops like asparagus and leafy greens in May and finishes up with root crops such as beets, carrots and parsnips, as well as winter squash and pumpkins, by October.

New York growers are also on the cutting edge of food safety practices. “We have always been ahead of the curve on Harmonized GAP audits, and two of our members have received their GlobalGAP certifications,” says Eden Valley Grower’s Walczak.

Cornell University’s national Good Agricultural Practices (GAPs) program has been a leader in the development of materials on GAPs and in its distribution of food safety information to the agricultural community.

“Food safety training is a big part of my job. In 2006, I started working with Wegmans when the retailer started a voluntary food safety certification program for the farmers they bought from. Today, we hold intensive two-day seminars bi-annually in the winter and spring and have to date trained personnel from more than 400 farms in the state.”

The quality and quantity of New York-grown fresh market vegetables is not only sought after by the nearly 20 million residents of the state and 57 million consumers living in the surrounding regions from Philadelphia to Boston, but further afield as well.

“Our produce goes all up and down the East Coast and as far west as the Mississippi. Weather will create markets in other areas. We’ve sent cucumbers to Texas and last October cabbage to California,” says Torrey Farm’s Kyle.

From Asparagus to Zucchini

Cabbage. New York is the largest producer of cabbage in the United States. During the winter months heads of cabbage are stored and then sold as fresh rather than being shredded for sale as coleslaw and the like.

“More customers are requesting cabbage packed in RPC’s rather than cardboard to cut down on the amount of waste to recycle. We’ve experimented with individually wrapped heads, but there’s not a big push for this by retailers,” says Torrey’s Kyle.

Corn. The state is ranked fourth in the nation in sweet corn production.

“Sweet corn is the number one produce item scanned in the store when it’s in season. Everyone has it in his or her carts. It’s a real unit driver,” says Tops Markets’ Wright.

Tops sells a proprietary variety of sweet corn grown for the retailer by Eden Valley Growers. The retailer works with more than 200 local growers in-season. “Yellow and bi-color used to be the bulk of the sweet corn grown. Now, we’re seeing white sweet corn increasing in demand due to retailer request. Expect to see more white corn in the future,” says Cornell’s Hadad.

Potatoes. “We buy and sell potatoes grown all over the state,” says Ken Gray, vice president of sales and marketing for the Bushwick Commission Co., in Farmingdale, NY. “Round white potatoes from Long Island harvest in August and are among the best in the country. Yukons are grown up state and are harvested in October and November. Yukon and other yellow-fleshed varieties like Keuka Golds that grow, yield and store better are gaining traction.”

“Red onions are becoming more popular and more of a staple for us,” says Andrew Gurda, owner/manager of the A. Gurda Produce Co., in Middleton, NY. “Organic summer storage onions are newer for us.”

Greens. “Kale in general, and New York-grown kale in season, is a big item for us. Broccoli crowns have become a bigger item in the last few years and the New York crop hits a few windows of opportunity for us,” says Tops’ Wright.

Eden Valley Growers is one operation that has increased its plantings of both kale and broccoli over the past few years. Broccoli is also a project that researchers at Cornell University have undertaken in an effort to establish a broccoli industry in the eastern United States. Prior to this, most broccoli sold at retailers in New York and other East Coast states came from California.

“The first step was to work with breeders on varieties that would hold up during the state’s cool spring and warm summers. The next phase was to look for growers in New York and up and down the East Coast that would take the leap to devote some acreage to these varieties. The ultimate goal is 12-month availability of broccoli on the East Coast. We’re now working with infrastructure and market development. Buyers are used to dealing with the West. They’re not jumping at buying the East Coast project yet. That’s what makes this a long term project, however, I am optimistic,” explains Cornell’s Hadad.

“If we can get broccoli under our belt with a proven track record, there are so many other vegetables that are dominated on the West Coast that we can try next,” adds Hadad.

Other Veggies. Snap beans, green peppers, variety lettuces and tomatoes are among other vegetables grown in volume by New York farmers. Several varieties of each of these commodities are cultivated to appeal to retailers and consumers alike.

What’s New? “Farms now in the fourth and fifth generation are more willing to take a risk and try growing new things. We have a farmer that now grows Brussels sprouts for us, and it has worked out well. We have a planning meeting every year with the farmers we work with. It takes a certain degree of commitment on our part to take 100 percent of a commodity, but then, too, the farmer who takes a risk to grow something knows in advance they have a market. It’s all about strong relationships.”

Peppers such as Hungarian and jalapeno, Bok and pak choy, collard and mustard greens, bitter melon and edible gourds are cultivated by farmers throughout the state to meet the needs of an ever-increasing population of residents from a variety of ethnic backgrounds, as well as mainstream consumers who enjoy new tastes.

“New York farmers are great producers of onions, cabbage, corn, leafy greens and many other fruits and vegetables. We’ve bought from them for years, it’s nothing new for us,” says Joel Fierman, president of Fierman Produce Exchange.

However for some retailers, sourcing New York fruits and vegetables can still be a challenge. “We’ve tried to buy directly from farmers in the state, but many don’t want to spend the time, fight the traffic and incur tickets to deliver produce into Manhattan,” explains Marc Goldman, produce director for Morton Williams Supermarkets, a nine-store chain in New York City that has no warehouse facility. “This season, we have someone who is willing to pick up the produce items we want from the different farms and deliver it into the city. He’ll also be able to give me notice two weeks out so I can include this produce in our ads. This will give us an opportunity to really push New York-grown produce.”

New methods to link local agriculture to New York’s consumer are in the works. “In addition to the traditional system of terminal markets, we’re helping to facilitate non-traditional distribution models, too. There’s been a rise to some 150 green markets in the city, CSAs have taken root, and restaurateurs and retailers have banded together to bring in product from farmers who in turn have banded together to create food hubs. It all flows better when the market pulls rather than when farmers try to push out, and that’s where interest in locally grown has been very positive for us,” explains Commissioner Ball.