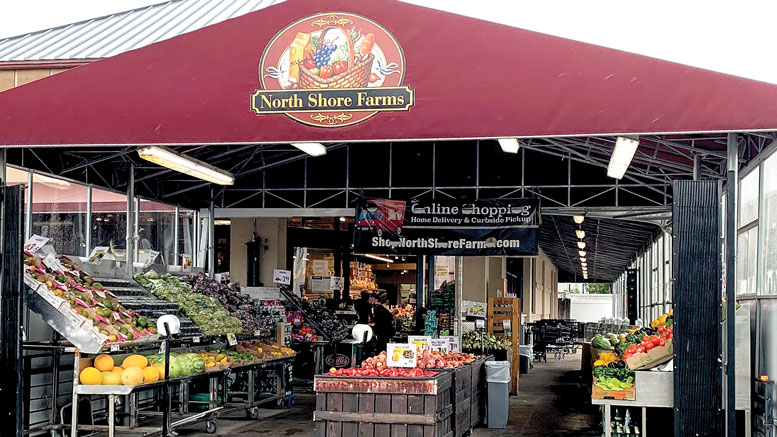 Small format chain of nine stores makes the best of a grocery store, a farmer’s market and a specialty shop.

North Shore Farms is a gourmet-oriented grocery store operation located mostly on Long Island with a strong devotion to perishables, including meat, deli, bakery and especially produce. Its determination to serve customers was particularly evident during the height of the COVID-19 pandemic.

At the height of the coronavirus crisis, shoppers could find a broad, almost full, assortment of produce as compared to the normally varied array found in most small format supermarkets.

Operating since 2003, now with seven stores on Long Island, one in the New York City borough of Queens and one in upstate Westchester County, the company’s stated focus is on offering the foods that keep families healthy and happy. To do that, the company says it works to incorporate the best of a grocery store, a farmer’s market and a specialty shop with prepared foods, gourmet items, and all the staples.

Produce is not only the opening department at North Shore Farms; it actually extends beyond the entrance under awnings where seasonal items are especially prominent mixed with popular year-round fruits and vegetables. As such, the stores make a statement supporting the description of the operation as part farmers market.

DISPLAYS INSIDE AND OUTSIDE

Outside the store and in, seasonal items are important, but the array of products, such as loose greens, is notable as well. Indeed, from staple commodities, such as potatoes and onions, through ethnic items such as Mexican guavas, North Shore Farms strives to serve the broad range of communities who live in its extraordinarily diverse market area.

North Shore Farms makes the investment in labor necessary to neatly maintain the range of products in terms of product categories, so the melon assortment during a recent store tour included orange flesh, Santa Claus and Galia varieties. North Shore Farms mounts large organic displays in its stores with both bulk and packaged products, including broad presentations of packaged salads and herb voluminous displays of bulk and packed produce.

Whenever possible, the stores also draw heavily from local farms on Long Island and surrounding areas. Evidence of its relationship with farmers from New Jersey was recently seen in displays and promotions of New Jersey greens and radishes offered at low prices.

On its website, North Shore Farms makes a point, saying that from early on in the turn toward natural foods, the company started building an organic department that matched its goal of bringing healthy eating options to shoppers, and they responded. So, the company constantly looks for new organic foods and lets customers know that the assortment will grow.

North Shore Farms also offers a large presentation of its own fresh-cuts at the front edge of the produce section, one that backs on to any number of gourmet product displays from jalapeno stuffed olives to tubs of burrata cheese preserved in water to spinach knishes.

The dedication of North Shore Farms to getting consumers what they needed was evident throughout the coronavirus crisis in produce and beyond. Consumers could count on North Shore Farms in a pinch, and it kept the produce department packed with fresh, healthy fruits and vegetables at a time when that was a reassuring prospect. 