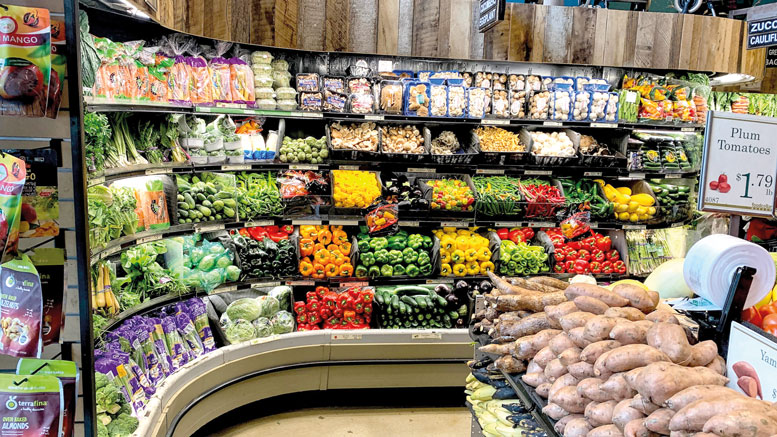 Long Island City has changed dramatically over the past decade and a half, and Foodcellar has grown with the neighborhood, opening one, then a second, gourmet supermarket this summer in which produce greets consumers to the operation.

The neighborhood, once an industrial hub — mostly with a footnote in history because the American Chicle Co. factory supported research on the first atomic bomb — is now a small residential community on the edge of the East River across from Manhattan. Most of its geography consisted of plants and warehouses, until the first true skyscraper in the New York borough of Queens went up, One Court Square, the former Citigroup Building, an event that began a transformation of the neighborhood.

The transformation was slow at first but gradually picked up speed with the addition of myriad luxury multi-unit buildings, some skyscrapers in their own right, although not so tall as One Court Square, which is directly across the street from the the newer Foodcellar, open in 2015, and just across the neighborhood from the original store that opened in 2008 to serve the affluent mostly young people swarming into the neighborhood.

Even if it isn’t the biggest supermarket in New York, Foodcellar does everything it can in appealing to its potential customer base, which is young, wellness-oriented and, in most cases, is careful about what it eats, according to Ozun Polatoglu, floor manager of the Crescent Street store. To serve Long Island City consumers, Foodcellar established a set of core values, including being passionate about the business and providing outstanding food, a positive attitude and outstanding customer service.

At the same time, Foodcellar strives to provide a creative learning environment, being involved in the community, including sourcing and promoting local products. The company backs up its value statement by guaranteeing no-questions-asked returns with receipt.

From the beginning, Foodcellar emphasized supplying the highest quality organic and natural products. However, the company did so with the underlying commitment to providing the fresh and flavorful product everyone could enjoy.

The commitment is reflected in the merchandising at both stores. Organic and natural food get high-profile treatment. Dry displays are focused on particular products in a way that indicates the range of choice that the store offers in specific fruits and vegetables.

Foodcellar uses secondary displays to highlight extended product selections in commodities such as peppers, as well as more exotic items. In some cases, secondary shelving over the main table displays doubles down visually on the point. Wet and refrigerated cases, which include a broad selection of fresh-cut products, place emphasis on both the degree of choice and convenience, which is a hallmark of both produce sections and is backed up elsewhere, including a bakery and deli section that offer many purchase-and-eat selections from scones to sandwiches and salads, including a salad bar section in the original store.

Polatoglu credits much of the merchandising’s attractiveness to the group of department managers and workers who are diligent about stocking and dressing the displays.

“My guys are very good. They come in at five o’clock in the morning,” he noted, and they start their day tending the section.

Each store has extensive signage tied directly to the displays so that consumers can identify items in the extensive offering easily. To top it all off, Foodcellar, which has an extensive take-out offering in the deli and bakery, operates salad bars in each store, ensuring that anyone who favors fruits and vegetables can get it for home and on the go.