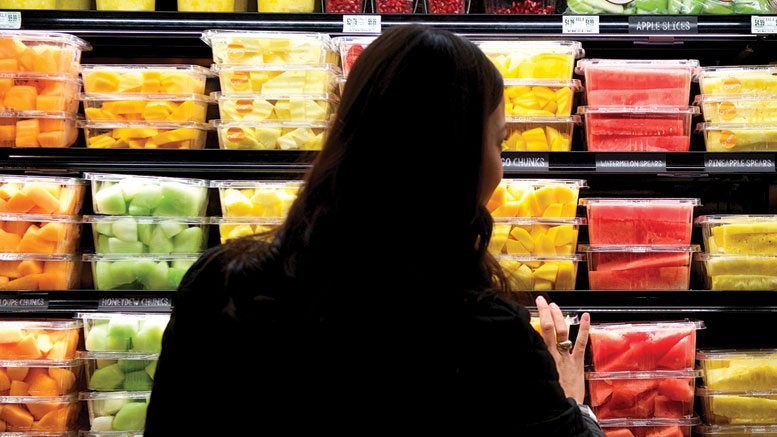 Safety, convenience and versatility help close the lid on sales. 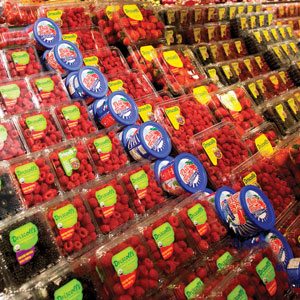 While bulk items still lure customers in, retailers are making use of clamshells to sell a variety of commodities in the produce department. “At its most basic definition, a clamshell is a hinged container that can be opened and reclosed,” says Jack Tilley, market research manager at Inline Plastics Corp., headquartered in Shelton, CT. “The term has not expanded, but the sizes and shapes of clamshells have certainly broadened in the past few years.”

According to Jennifer Evans, marketing manager for Sambrailo Packaging, headquartered in Watsonville, CA, plastic clamshells have been in existence since the idea was first developed by Charles Sambrailo in 1987 and became more commonplace in the early 1990s. “Clamshells started with the friction-lock,” says Evans, “but over time, button-locks were introduced and have grown in popularity. After our Mixim clamshells were introduced with smooth walls, many other manufacturers have incorporated this feature into their designs. New larger sizes, such as 12-ounce and 18-ounce clamshells, have been added over time to accommodate larger volumes in club stores.”

To best serve the products they contain, clamshells must provide some basic benefits. “Most importantly, clamshells need to physically protect the produce inside from bruising. Beyond protecting the product, there are several attributes that will make a design better or worse,” says Roman Forowycz, chief marketing officer at Clear Lam Packaging in Elk Grove Village, IL.

These include exceptional visibility, which require smooth walls and minimized ribbing; easy opening and closing ability; stackability; and ease of storage. Recyclability is expected, too, according to Forowycz, as well as tamper evidence and the ability to enhance shelf life.

Clamshells have become increasingly lightweight in the past half-decade. In fact, they have reached the same point as plastic water bottles — any thinner and there’s a risk to the integrity of the container. According to Forowycz, both retailers and consumer packaged goods are moving away from plastic into the direction of container designs that use lidding film instead of rigid lids or hinged clamshells. “We are seeing more and more of this with tomatoes, sliced apples, lettuce and other cut vegetables. New peel and reseal films are being incorporated as well.”

The machinery used to manufacture clamshells has improved, too. “The best thing that has evolved are the machines that manufacture the clamshell. They’re more precise, better orientated and better designed to produce a much more efficient package for items like produce,” says Kurt Zuhlke, president and chief executive of Kurt Zuhlke & Associates Inc., in Easton, PA. Quality issues made automation difficult in the past, but better equipment and a more streamlined process have improved quality while keeping costs down.

Retailers interested in expanding their clamshell offerings need to understand the specs. “Buyers should start by providing general dimensions to help maximize cube efficiencies throughout the supply chain,” says Forowycz. “Then they should provide designers and manufacturers with the type of product that they would like to package, as well as the type of image they would like to convey.” This could include more traditional presentation, a modern design, mobile format or dual use as a serving dish.

The particular sales channel where the packaging will be used is also important, as club stores, conveniences stores and traditional retailers have different needs. The need of each commodity must also be considered. “The container may need venting in order to let the gases escape,” says Inline’s Tilley. “Another factor is how high the containers need to be stacked on the shelf, and how many containers can fit on the shelf, which could affect the shape of the container need.”

Zuhlke has some recommendations. “First, they want to make sure the material they’re using is a recycled PET. Secondly, it should be clear on all sides so the consumers can see the quality of the product inside the clamshell. Many times you’ll find clamshells that are either tinted or half black/half white and it takes away from the sale value because consumers think you’re hiding something.”

Evans suggests that pack weight is the best way for produce buyers to identify the type of clamshell they need. “An eight, 1-pound strawberry clamshell is the most common tray configuration for strawberries, where eight is the number of clamshells in the tray. Twelve, 6-ounce clamshells are the most common tray configuration for raspberries and blackberries, but blackberries can also be packed in 12-ounce or 18-ounce clamshells. Blueberries are most commonly packed in a dry pint or 6-ounce sizes. Both are delivered 12 clamshells per tray.” 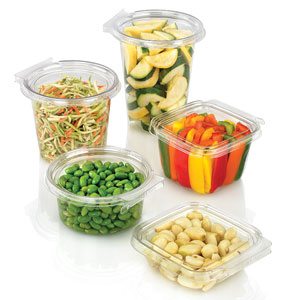 Clamshells can also be used to market premium products more easily than bulk displays. Consumers are accustomed to seeing berries in this type of packaging and the range of packaged commodities is increasing, according to Sam Monte, director of operations at Monte Package Company in Riverside, MI. “Now we’re seeing more things like bell peppers and apples being put in clamshells. If it’s a premium product like an organic pepper or a new line of apples, it’s a different way of marketing them. As we see more varieties of apples coming out, clamshells are a really good way to differentiate those varieties.”

The options for conveying a message on the clamshell is also much greater than a small peel use sticker. “If you put three bell peppers in a clamshell, you have a lot more real estate to put information about those bell peppers — where they’re grown, who grew them, a recipe, different things like that,” says Monte.

Polybags offer messaging space as well, but clamshells have an advantage in protecting produce in transit. “That’s one of the biggest things on a plastic PET clamshell versus a polybag,” says Monte. “If you have 5 pounds of apples in a 5-pound polybag, that’s five pounds of weight that’s being pushed on each other. If you’re putting 4, 6 or 8 pounds of apples into a clamshell, those clamshells are providing a tremendous amount of protection from bruising during packing and shipping versus polybags. That’s a huge differentiator.”

Standard sizes — 8-, 12-, 16-, 24- and 32-ounce containers — are produced in a common footprint. This isn’t true of all newer packaging options. “There has been significant progress in this direction. This is being driven by leading retailers. The new move toward retail-ready cases is driving efficiencies throughout the supply chain,” says Clear Lam’s Forowycz.

Zuhlke recognizes new clamshell sizes and shipping boxes haven’t completely synched up, yet. “The retailer needs to sell an item at a certain weight level or a certain volume size, and that doesn’t always work where you can get the clamshell to fit that item into that box. There are cases more often than not, that require a different box.”

That’s the solution for now, but manufacturing is sure to catch up soon. “The machinery is running so much more efficiently, we can mold better materials and save money for the manufacturer by cutting down the material costs and still maintain the strength and integrity of the material,” says Zuhlke.

Sambrailo’s Evans doesn’t see this as a problem. “Clamshells are usually designed to fit into trays that fit on a standard 40 x 48 pallet. This is what produce buyers are looking for the most. As far as footprints are concerned, the trays are usually designed with six-down or 12-down configurations within the 40 x 48 footprint. Within our Mixim line of products, the standard trays are designed with a unique nine-down configuration on the 40 x 48 footprint to maximize shipping.”

Zuhlke points out another issue that may be coming to the forefront soon — the impact polybags can have on ocean life. “Environmentalists are starting to find out that the movement toward Ziplock bags at the retailer level are beginning to show up on the shorelines around the United States,” he says. “Many of the people that go to the beaches are taking these grape bags down to the ocean, giving them to their kids, then discarding the bags.”

Once these bags get into the water, they can sink [and stay] 200 hundred feet below the surface. The bags can be misidentified as a food source by marine life, causing them intestinal problems. “Clamshells do not float; they sink to the bottom. The bag is not the answer,” says Zuhlke.

The question of whether or not consumers will pay extra for the convenience of packaged produce over bulk has largely been answered in the affirmative. “Consumers do seem willing to pay a premium for that type of package if the commodity inside the clamshell is worth it,” says Monte. “If it’s an organic item, if it’s a new variety, if there’s value added, our customers are finding success with consumers willing to pay a premium.”

It’s all about choice and offering the consumer options for convenience. “Consumers are willing to pay for convenience, ease of use, mobility and freshness,” says Forowycz.

Inline Plastics’ Tilley also sees a willingness among consumers to spend a little extra for added value packaging. “Especially if the clamshell can offer more protection to the food contents than other types of food packaging, such as flexible or paperboard.”

Sambrailo’s Evans sees clamshells for commodities like berries as commonplace and something most consumers are accustomed to. But newer offerings in the containers have increased appeal and cost may not even be a consideration for them. “With other commodities, such as tomatoes being packed in clamshells or tubs with film seals, consumers may be willing to pay a bit more for the convenience; but they probably don’t think of this in terms of a premium for the packaging.”

Smart Packaging to Suit the Times

A RIVER RUNS THROUGH IT