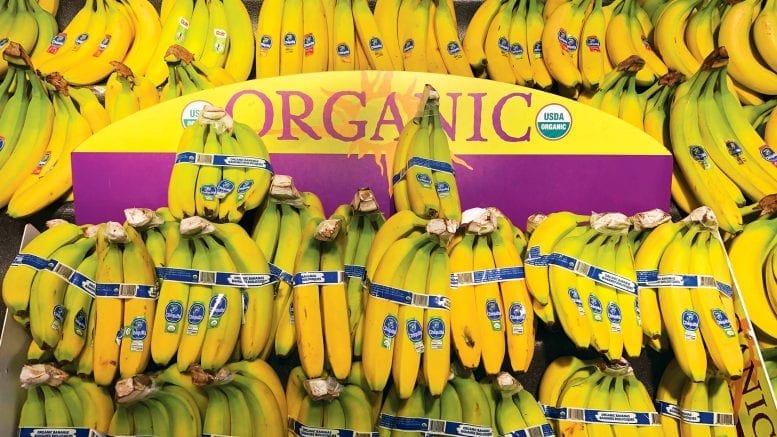 A mature industry will always be tough to grow, especially if you deal in one of the world’s most-traded sweet fruit, but the right in-store solutions for organic bananas can help capture additional sales for the category.

“Since demand for conventional bananas has remained somewhat flat, with the exception of promotional boosts and retailer programs, the organic market is a strong opportunity to grow the category,” says Bil Goldfield, director of corporate communications at Dole Food Company in Westlake Village, CA.

With a program that has now been running for more than two decades, Dole says it is the largest grower and distributor of organic bananas for the U.S. market.

“Demand for organic bananas initially started in coastal areas of the United States, but in the past few years we have seen growth in the demand for organic bananas in the Central states too, reflecting the general consumer interest in organic produce,” says Goldfield. “Retailers, recipe-developers, food media, bloggers and other third-party influencers have the biggest impact on spreading the organic message, initially on the coasts and now increasingly in the Heartland.”

Organic now comprises 8% of Dole’s banana supply, as the result of growth that Goldfield expects will continue into the future.

“Organics have been gaining sales momentum over the last few years, and it appears they will continue to do so,” says Postell.

The Chiquita executive draws attention to a Nielsen Perishables Group study showing organic bananas grew in dollar sales at an annual rate of more than 20 percent between 2011 and 2018.

In terms of demographics, Postell points to research from NPD Group that notes organic consumption traditionally comes from Millennials and less-price-sensitive households.

“As more and more people across the country look to adopt a healthier lifestyle, we believe we will continue to see growth in this category,” says Christou.

“Consumers are more health-conscious, they are more conscious of social responsibility, and that’s what’s driving the market,” notes Victor Heredia, U.S. sales manager at Phoenix-based Coliman Pacific Corporation. “The consumer is more educated about pesticides and that eating organic food is good for you. They also know it’s healthier for the workers, as they don’t have to be in the fields with products that are bad for their health.”

Coliman’s Mexican parent company started growing organic bananas in Tecomán, Colima in 2012, and over time all production has been converted to both organic and Fair Trade certified.

This is the same state where San Diego-based Organics Unlimited has its origins. The company’s president and chief executive, Mayra Velazquez de León, has a clearer picture than most of how far the category has come — after all, her father Carlos Cortes pioneered organic bananas in the U.S. market in 1972.

“That was when hippies were getting into organics, and my dad was already growing that way without even knowing it because they were growing them without any chemical fertilizers or fungicides,” she says.

PRICING AND MERCHANDISING
Velazquez de León laments the price pressures retailers and large multinationals have put on the organic banana supply chain, but she is still optimistic for the category’s potential including the complementary and relatively more recent growth seen for organic plantains.

“The only thing we can do is just become a little more effective on every single front,” she says. “It gets to a point where they can’t and they won’t be able to grow organic if we keep pushing the prices down.”

Her observations are consistent with the data. Chiquita’s Postell references Nielsen Perishables Group’s observation that the price gap per pound between conventional and organics has narrowed to an average of $0.21 in 2018, compared to a price gap of $0.28 in 2011.

“Our main recommendation to retailers is for pricing strategies to balance the role of each of these two segments considering also the sustainability of the supply chain given the organic production constraints,” says Postell. “All of this must certainly be in pace with each individual retailer’s pricing strategies.”

Velazquez urges retail buyers not to consider the higher price as a “premium,” because organic bananas are “a lot more expensive to grow.

“We are growers, but we’re also distributors — so we see both sides of the coin,” she says. “I believe organic produce has to be available for everybody, but we have to educate the consumer on what it takes to grow organic, that it cannot be the same price as conventional.”

If consumers are to be willing to pay more for organics, a significant level of educational activity and branding will be needed. The approach tends to vary between the pure-play organic companies and those that deal in both organic and conventional.

“Retailers need to highlight organics in their produce sections and differentiate them from other products,” says Christou of Del Monte. “Making organics available and educating consumers on their benefits could also help invigorate sales in this category.

“Retailers should adopt tactics such as eye-catching promotional items and merchandising activities that entice and educate consumers,” says Christou. “This might include development of seasonal POS for shelves, improved labeling information about the product nutrition and convenience, and displays close to the checkout and entrance of the store.”

He adds strategically placing secondary displays in areas such as the cereal aisle will also help lift banana sales.

Dole’s Goldfield says the core target of his company’s organic bananas is moms and dads wanting to create healthier meals for their families. But is this goal best achieved through a separate organic section or keeping organic and conventional side-by-side?

“An argument can be made for both,” he replies. “In those regions where organic is already widely accepted, such as major urban centers and at retailers that carry significant amounts of organic produce, stocking organic bananas in an organic produce section makes the most sense.”

In contrast, Goldfield says placing the two next to one another will likely do more to grow new users in areas where organic is yet to hit mainstream status.

“My recommendation to retailers is to use both strategies simultaneously to ensure you capture both types of consumers,” says Goldfield.

“Assortment strategies between conventional and organic bananas should be aligned with each subcategory proposition to best maximize total category profitability,” says Postell. “Similar to their conventional counterpart, color and appearance are drivers in the buying decision process. Hence, visual merchandising tactics and point-of-sale material can highlight organic products and assist in boosting sales.”

LEVERAGE BANANAS WITH CSR
Goldfield says consumers are largely educated on the differences between conventional and organic on the shelf, but they could still learn more about the specifics of organic production.

“In addition, consumers often confuse and equate organic with social responsibility,” he says. “Retailers can leverage this by sharing information at the shelf about their Corporate Social Responsibility [CSR] efforts to build a stronger rapport with the organic shopper.”

For organic-only banana companies CSR is very much intertwined with their sense of purpose, often in conjunction with certifications like Fair Trade or, in Organics Unlimited’s case, the GROW (Giving Resources and Opportunities to Workers) program.

“Companies that are 100 percent organic and Fair Trade (OGFT) — which are few and far between — aren’t able to blend margins across conventional and OGFT products to offer a lower price,” says Angelica Hicks, banana product lead at Oke USA in West Bridgewater, MA.

Oke USA trades its bananas under the Equal Exchange brand, with distributors on the East and West Coasts as well as the Upper Midwest selling the fruit mostly to independents or community food cooperatives.

The bananas are sourced from associations in Peru (APOQ and CEPIBO) and Ecuador (AsoGuabo), bringing a “differentiating factor” that Hicks says is valued by alternative stores.

“One of the most important aspects of organic production, and more specifically of Fair Trade, is that consistent, higher prices allow small farmers to organize and create their own export businesses,” she says.

She describes bananas as an “interesting challenge” for merchandising and promotion, seeing as they often have minimal to no packaging.

“There are typically not many brand options for consumers at the store, which means the shoppers spend little time thinking through their choice,” she says. “For these reasons, our approach is twofold: we focus on short, clear messaging with shelf-talkers and posters at POS, and outside of the produce aisle, we create interactive campaigns designed to get produce staff and consumers thinking deeply about their banana choices and small farmers’ livelihoods.”

PRODUCTION TRENDS
While merchandising and educational efforts may serve to lift demand and potentially keep the differential in check, supply limitations could also have an impact.

“Yield will continue to be a constraint even in the regions that have the right weather conditions,” says Postell. “Until now, Chiquita was able to adjust the supply chain to secure availability. However, if demand continues to grow at the current pace, availability may become an issue.”

“We find that in some cases producing organic bananas requires more land and water than it would to produce an equal volume of conventional bananas,” notes Del Monte’s Christou. “Ecuador, Mexico and Colombia are among the countries where we source our organic bananas. Organic banana yields will perform better in drier climates, therefore requiring less irrigation and additional water usage.”

Other major organic banana supplying nations include Peru and the Dominican Republic; the latter is the world’s leader in the category, but the majority of its volume is sold across the Atlantic to the UK and Europe rather than to its regional neighbors in the United States.

Goldfield says his company is investing in the growing technologies, programs and people that will allow yields to keep up with increasing demand.

Hicks of Oke USA says the conversion to organic is often advantageous to growers due to higher economic returns. In her opinion, growers in the Chira Valley of northern Peru are particularly well placed.

“The region is rather dry and therefore less at risk for stubborn banana maladies, such as the pernicious fungal disease Black Sigatoka,” she says. “That said, climate change is affecting producers everywhere, resulting in extreme temperatures or erratic weather patterns in this region as well, such as unprecedented flooding in recent years.”

Most companies that handle organics say there is very little difference in shelf life, but good handling is needed. Hicks says organic bananas tend to be more susceptible to developing crown mold or other cosmetic damages, as many effective chemical treatments are not allowed.

“For example, conventional bananas are often treated postharvest with fungicides containing Thiabendazole to prevent mold growth, whereas organic bananas are treated with a solution of water, lemon juice, and alum; healthier for the ecosystem and workers, but less effective for mold prevention,” she says.

Chiquita’s Postell says that to overcome minor variances in shelf life between organic and conventional bananas, in early 2019 the company started using solutions such as Star Care Containers for 100 percent of organic loads shipped to the United States.

“The new ultra-efficient containers use software that automatically regulates the containers’ compressor to control the atmosphere,” says Postell, noting this has resulted in fresher bananas with a longer shelf life. “The Star Care Containers have also resulted in a positive environmental impact, reducing CO2 consumption by 17,000 tons per year.”

And there may well be more supply on its way. Precise figures are hard to come by, but Mordor Intelligence of Hyderabad, India estimates 890,000 metric tons (MT) of organic bananas were produced worldwide last year with that number projected to grow to 1.23 million MT by 2024.