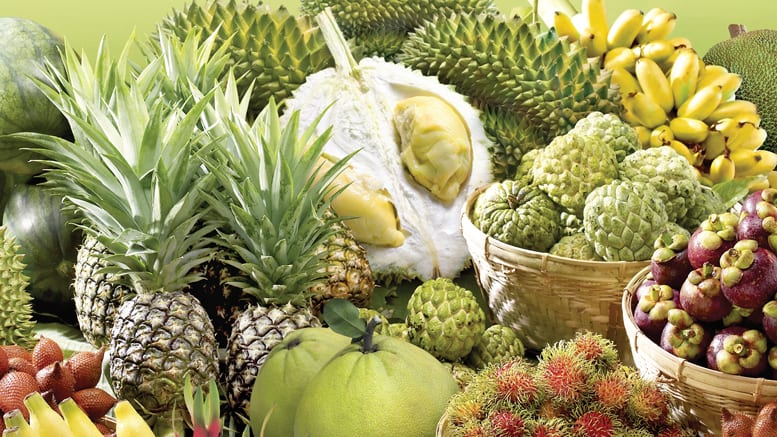 Keys to keeping the category strong all year long.

Not long ago, most consumers thought of tropical fruits as bananas, pineapples and maybe coconuts. With shifting ethnic demographics in the United States, mangos and papayas have gone mainstream, and thanks to more adventurous consumer palates, lychees, passion fruit and dragon fruit are gaining traction. Vegans recently have discovered jackfruit is a great meat-like substitute for pulled pork. These trends present both opportunities and challenges for produce executives looking to satisfy demand for tropicals.

“Up until a few years ago stores didn’t really focus on tropical fruits,” says Robert Schueller, director of public relations for Melissa’s/World Variety Produce, Los Angeles. “They thought, ‘I don’t have Asian consumers so why would I have jackfruit, lychee and rambutans,’ or ‘I don’t have Latin clientele so why would I carry so many varieties of papayas, coconuts and mangos?’ Now, we are seeing stores carrying these different varieties because they want to be considered a one-stop shop.”

As the category continues to grow, there are a few basic things retailers can do to keep tropicals selling year-round.

According to Dionysios Christou, vice president marketing, Del Monte Fresh Produce, based in Coral Gables, FL, “Tropical produce is typically those fresh items that grow within a narrow band north and south of the Equator.” Christou acknowledges, however, that this definition has expanded lately to include all exotic produce regardless of growing area.

“Retailers need to ensure that the products selected do indeed fall under the tropical category,” she says. “Retailers should also consider product availability. It is important to leverage opportunities with products when they are available, since not all are obtainable year-round.”

To help retailers decide what tropical commodities to stock and promote, they need to think about their overall goal. According to Alex Jackson Berkley, sales manager, Frieda’s Specialty Produce, Los Alamitos CA, retailers need to ask themselves, “Do they want to move volume; do they want to have a wide variety of specialties to inspire the shopper; do they want to focus on five items and execute those really well?” Once produce executives have answered these questions and established goals, choosing what items to carry will become easier.

Of course, much of this will be determined by their customer base as Ronnie Cohen, vice president of sales at Vision Import Group, Hackensack, NJ, points out. “Each banner and each footprint will vary depending on what community it is serving,” says Cohen. “One person’s store you may consider mainstream for a tropical item while others consider it as specialty or exotic.” The bottom line, Cohen stresses, is to know your customers.

Carolina Garcia, marketing manager, Fyffes North America, Coral Gables, FL says Asian and Hispanic shoppers are most likely to purchase ethnic tropical produce. “Retailers should consider the holidays that are celebrated by these groups to plan for in-store promotions and ensure that their ethnic tropical displays are fully stocked.”

Good intentions on tropicals do not always translate to the bins, however, and some retailers may not be doing their due diligence when it comes to tropicals. “I think most are reasonable in some offerings,” says Cohen, “but there are pockets in the country that simply do not have the diversity, so hence produce managers in those areas have limited knowledge due to the fact their trade doesn’t buy what is available, creating no or little demand.”

“Sometimes Northern specialty fruits end up in the tropical section,” cautions Mary Ostlund, marketing director, Brooks Tropical, in Homestead, FL. “Since we get so much of our produce from the Tropics, it’s understandable. But it’s nice to make the distinction that the tropics produces some unique fruit that can only be grown in the tropics.“ 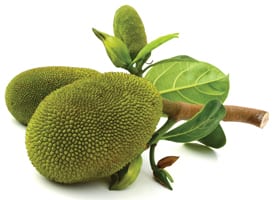 Education is key for customers who may be unfamiliar with the breadth of the tropicals category, and digital communication can be a useful tool. “Online is an important communication mode, certainly,” says Allan Acosta, tropical general manager for Robinson Fresh, Eden Prairie, MN, “But when shoppers are in a brick-and-mortar store, packaging is a great way to communicate. Our mango bin is a great example. We know that picking and cutting mangos is a barrier to some shoppers, so we created a bin that shows shoppers how to overcome these barriers.”

Melissa Hartmann De Barros, director of communications, HLB Specialties, Fort Lauderdale, FL, says the fruit can speak for itself through taste testing. “Tastings always improve sales,” she says. “For example, we just recently did a demo in a club store where we offered rambutan, and the success was tremendous. There were long lines to try the fruit, and the stores sold almost 100 percent of the inventory we supplied.”

Another simple, yet effective, way to reach customers directly in the aisles is effective signage. “POS signage is a huge opportunity to educate consumers,” says Jackson Berkley. “Even for retailers who may have a no-signage or limited signage policy, the specialty tropical should be an exception as consumers will buy the product if they know what it is, what it tastes like and what to do with it.“

When to buy tropicals is also useful and important information for consumers. Matthew Clark, president of Los Angeles Produce Distributors and LA Produce Fresh, Los Angeles, points out that because tropical produce usually contains a lot more water than produce grown in a Mediterranean climate, it tends to ripen faster. “At the same time in many cases, commodities must be distributed greener than desirable because they need to withstand the handling required to get to the shelves, including many temperatures breaks along the way,” says Clark.

Clark thinks education on how to purchase ripe tropicals would be beneficial to consumers, but notes that due to the supply chain concerns, many distribution centers would rather not risk the product condition. “Mangos are a clear example of how consumption could increase significantly if the supply chain could work with retailers to ripen the fruit before it hits the shelves.”

Stay On The Health Message 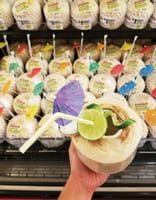 Promoting the health message is another key selling point as consumers continue to be interested in healthfull offerings. According to Berkley, “As volume on tropical produce items becomes more available, consumers need to start understanding the health benefits, and that is our job as marketers. Our websites, point-of-sale in the store and educating the produce managers is crucial to making this happen.“

“Tropicals, on the whole, have a nutritional power punch,” says Del Monte’s Christou. “Think of papayas with their digestive enzyme papain. Perfect for healthy eaters who may have indulged too much over the holidays and folks who are watching their weight.”

Robinson’s Acosta says helpful health information isn’t often marketed by retailers, and knowing fruit is healthy doesn’t necessarily change buying behavior. “What does make them change is ease of use and recipes, so they can incorporate healthy foods more easily and frequently in their diets,” he says.

Hartmann De Barros says some retailers could do better with their messaging. “When I think of papayas and the tremendous health benefits, especially its very high vitamin C content, I know that most shoppers are not aware of that. We always include it in the POP materials that we provide to our retail customers, but as a shopper myself, I don’t see enough information at the store level.” 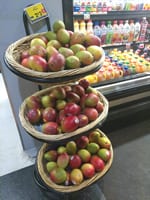 As tropical sales continue to grow, much of the category may go mainstream. “More and more tropical fruits are appearing more mainstream as consumers look to diversify what they eat, so they can eat more fruits and veggies,” says Ostlund. She sees papayas joining the ranks of green-skinned avocados in the mainstream category. “Not far behind is starfruit, passion fruit and coconut. rambutan and lychee fall into the rampant devotee column. To make your produce aisle the shopping choice for these devotees, you’ve got to carry rambutan and lychee when they’re in their short season.“

For Schueller at Melissa’s, the most dramatic growth in the tropical category is the dragon fruit, with jackfruit also seeing significant growth. “We’ve been carrying jackfruit for more than 20 years,” says Scheuller, “but it wasn’t until about five years ago that vegans and vegetarians started using the fruit as a meat substitute for pulled pork.“

Marc Goldman, produce director, Morton Williams Supermarket, in the Bronx, NY, also sees ethnic items going more mainstream. “For Hispanic people, the yucca and the plantains are becoming much more mainstream. We would have never sold that years ago.” He also has seen a slight uptick in demand for lychee and jackfruit, noting that some of the managers at store level are hesitant to stock these items. Concerns about availability also weigh on decisions of what to promote and carry.

“We don’t have a warehouse. So I’m buying out of the market and from different suppliers. If I can get a good price on something like jackfruit, I’ll put it in the ad, but unless I have something where I know the availability in two weeks, it’s very hard to do something like that.”

Tropicals lend themselves well to bright, colorful displays and retailers would be wise to make this a part of their merchandising plans, especially when many domestic items aren’t in season. “Tropical colors in winter are a huge draw,” says Mary Ostlund, marketing director at Brooks Tropical, Homestead, FL. “Although most tropical produce comes from Florida, Central and South America, your consumers will treat any Polynesian theme as apropos.” 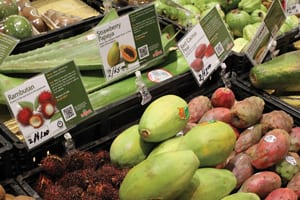 Allan Acosta, tropical general manager at Robinson Fresh, Eden Prairie, MN, sees the Super Bowl as a great opportunity for promotion with tropicals. He says it makes sense to capitalize on the work that commodity boards are already doing by advertising to consumers with such campaigns as Avocados From Mexico’s advertising during the Big Game. “Providing recipes and meal ideas around the known item of avocados and pairing with a lesser-known item like a mango can be a fun and creative way to market,” he says.

Cross merchandising with secondary displays at checkout with products such as cereal, yogurt and ice cream is another way to boost sales during the winter months and capture the attention of impulse buyers, according to Bil Goldfield, director, corporate communications, Dole Food Company, Westlake Village, CA. “Like few other fruits and vegetables, bananas and pineapples can trigger impulse purchases, so retailers are wise to leverage this opportunity to the fullest potential,” says Goldfield.

According to Dionysius Christou, vice president of marketing for Del Monte Fresh Produce, based in Coral Gables, FL, “The year-round availability of this category opens the door to a wide variety of cross-promoting opportunities. Pineapple rings go great with ham during the holiday season and burgers during grilling season. Similarly, fresh-cut mangos can be enjoyed alongside ice cream or pudding for dessert or at any time throughout the year.”