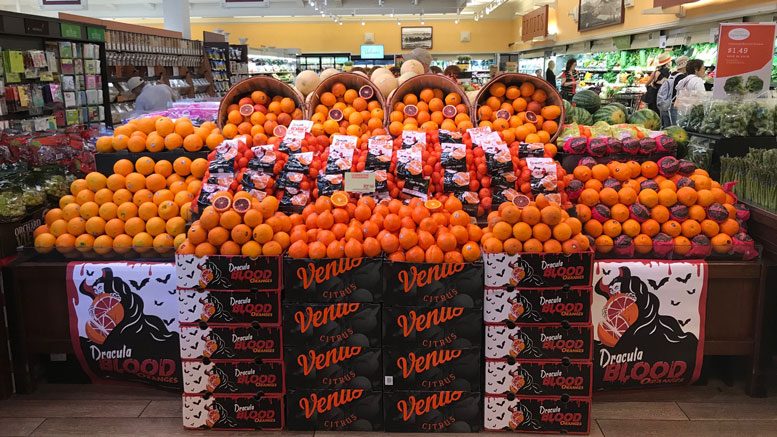 Australia and New Zealand have a wide and scrumptious offering for the produce departments of North America. But with an emphasis on flavor and higher logistical costs, they often come with a premium attached.

The Australian citrus industry has been booming in recent years, as export volumes doubled in the space of a decade to hit a record of more than AUD$500 million (US$290 million) in 2019, according to Nathan Hancock, CEO of Citrus Australia.

But you’d be forgiven for not noticing this sales surge in North America, which only received around 6%of Australia’s citrus shipments last year.

“There’s interest in Australia to trade more into the USA; however, the market has to be willing to pay similar prices to those achieved in other premium markets, namely China and Japan, which are shorter transits and established customers,” he says.

While the figures don’t lie that Australians are shipping less citrus across the Pacific, there are some exceptions to the rule. One of them is Pinnacle Fresh, a company based in the Australian state of Victoria with an import-focused office in Kingsburg, CA.

Australia’s isolation makes creativity a necessity if it is to find a point of difference in global markets, because its industry can seldom compete on price. For Daniel Newport, account manager at Pinnacle Fresh USA, this means finding new possibilities where others see hurdles.

“When I moved to the U.S. five years ago, blood oranges were on the decline, especially imported blood oranges, because they’re so much more expensive,” says Newport. “But we saw that as an opportunity rather than anything else, so by 2017 we developed a brand called Dracula blood oranges.”

Simple is beautiful, as the saying goes. Pinnacle printed imagery on cartons of a Dracula biting into the oranges with blood dripping down his mouth and the first trials went very well.

“With Halloween being such a big part of the U.S. environment, we knew the timing was perfect and that’s where the brand came from,” says Newport. “We enter the market in September and peak in October, and we put promos in place for Halloween.”

Over the course of three seasons, the Dracula shipments rose from seven containers in 2017 to 19 the next year and 35 in 2019.

“We’ve actually reinvigorated that commodity, and it’s far exceeded all expectations we had for the brand,” says Newport.

Supermarkets started requesting using Dracula brand with other citrus, so Pinnacle has now expanded it into mandarins and will likely incorporate Cara Caras in 2020 as well.

“This year I don’t even know what limit to put on the number of total citrus, but we should double the volume comfortably to the U.S.,” he says.

Newport has extra reason to be optimistic for Australian citrus this year, as there is likely to be lighter crop, which tends to mean a larger size profile for the fruit.

Nathan Hancock of Citrus Australia adds the respiration rate of the fruit picks up after the journey across the ocean at low temperatures, so he suggests in-store promotional material can recommend consumers refrigerate the fruit at home to increase the shelf life.

A RICH OFFERING OF NICHE PRODUCTS

Pinnacle Fresh also has several early-stage export programs for niche items, including Australian lychees, which began in the 2015-16 season and are mostly sold to retailers with Asian demographics over the winter.

“Aussie lychees are preferred for flavor and appearance. Ours taste sweeter, but are also bright in color as opposed to the pale South African lychee,” says Newport. “We tripled our volume from 2019 to 2020, and customer satisfaction was again good with everyone hoping for a longer season next year.”

He believes this success will lead to the four growers involved so far to register more of their acreage for export to the U.S. market, while other growers have taken notice and will likely sign up for the 2020-21 season as well.

Over the winter, Pinnacle also had one of its most successful U.S.-focused cherry export seasons to date in the U.S., sourced from New Zealand and the Australian state of Tasmania, which are both fruit fly-free.

“Customer satisfaction from our retailers was very high this season,” he says. “All of Whole Foods, Wegmans, Gelson’s, New Seasons, Bristol Farms and The Fresh Market are reporting strong sales growth and lower waste,” he says. “We’ll never compete with the price of South American cherries, nor do we need to.”

“With growers continually planting late varieties in high elevated areas, we hope to extend the season by another week in the future.”

Over the past five years, Giumarra Companies of Los Angeles, CA, has been one of the pioneers of Australia’s mango program into the U.S. market, with different flavors, textures and colors to the traditional Latin American supply.

Welch says stakeholders along the supply chain — including Giumarra and the retail chain Gelson’s — have put in a “disproportionate” amount of time and finances to help build the Aussie mango program.

“We have found consumers look for Australian mangos every fall and have become knowledgeable and loyal to these varieties due to extensive in-store sampling programs and merchandising. Some shoppers even know the varieties by name and ask when each will arrive,” says Harris.

The industry added a new variety this year with Keitt, adding to the other varieties and brands Kensington Pride, R2E2, and Calypso.

“Australian Keitts are different than typical Keitts seen in the U.S. marketplace due to their size, creamy flesh, and stunning semi-blush skin color,” says Harris. “Keitts from other countries are traditionally green-skinned.”

“We continue to see double-digit growth in our Australian mango program year over year. These Australian mango varieties originate from East Indian mangos, and therefore have a dense, rich flesh, less fibrous pulp and a smaller seed.”

“We typically see conversion rates tied to sampling, reaching 50-70%, and when sampled, customers often buy more than one mango at a time, with retail prices averaging $6-$8 each,” says Harris. “One tactic we have seen is to have children of customers taste the mangos, then urge their parents to buy them.”

Speaking more generally, she says in a highly competitive industry, retailers owe it to their customers to bring something new and different, especially in the fall/winter when fruit selection can be limited.

“Savvy retailers who understand this are reaping the rewards,” she explains. “Imported fruit from these regions has a romantic ‘down under’ appeal to Americans, and retailers should not shy away from these offerings based simply on price.”

Another key part of Giumarra’s Down Under program is the Lemonade-branded apple, a yellow cultivar that was bred in New Zealand by crossing Gala and Braeburn varieties.

“Retailers and consumers alike are interested in Lemonade because of its unique flavor, catchy name, and bright color,” says Giumarra’s Harris. “Its beautiful yellow color offers visual diversity in retail apple displays, where most apples in the marketplace are red or bi-color varieties.

“The color break stimulates an impulse buy, and once consumers taste its unique, sweet-tart flavor and very crunchy texture, they come back for more.”

“The overall New Zealand crop does appear to be larger this year, with fruit size trending toward the larger ‘U.S.’ sizes,” says Bushong.

Alan Pollard, chief executive officer at New Zealand Apples and Pears, says the country’s export apple crop will likely rise by 3% in 2020 while plantings are up 2%.

“We saw good early fruit color development, a good blossom and a high fruit set. All of this indicates a high-quality season for NZ apples and pears,” says Pollard, adding Envy was the leading export variety or brand to the U.S. last year, followed by Gala, Fuji and Jazz.

James Milne, senior VP of categories and marketing at Vancouver, Canada-based Oppy, says cooler temperatures in New Zealand have led to a “perfect color profile” for Envy apples, which should have an outstanding crop.

While storage techniques allow for North American apples to be in the market for longer, importers like Milne are still bullish about the opportunities for southern hemisphere-grown counter-seasonal fruit.

“There is an undeniable advantage to fresh fruit from a fresh crop; the texture, flavor, juice and other eating qualities are incomparably better in fresh apples,” he says. “The consumers and retailers alike understand and prefer fresh fruit over late storage crops for this very reason.”

“Taylor’s Gold continues to have a widespread following, and is predicted to be back in stronger fashion after 2019 saw a lower-than-expected performance,” he says. “Comice meanwhile has an important role to play in our pear program but remains niche, with loyal retailers that know, understand and enjoy the product”

While apples have long been a mainstay and a range of niche items are on the rise, New Zealand’s kiwifruit are the leading source of North American sales for the Down Under fruit basket.

“SunGold plays a central role in driving the success and growth of the wider category,” he says. “Thanks to its growth, which is close to a 31% increase in sales from 2018 and 2019, retailers appreciate the strong drawing power of the fruit and therefore allow it increased display size, which in turn fosters greater consumer awareness.”

“What we are really excited about is that it’s been a great growing season so we are expecting a slightly earlier crop with exceptional fruit that has the fantastic eating qualities that consumers have come to know, love and expect.”

“The strongest growth is in the North East, the South East and California/West, which also offer the greatest short-term growth potential,” he says. “Within Canada, the Greater Vancouver and Toronto regions have seen the strongest growth.”

“For the 2020 season, Zespri aims to continue the double-digit growth we’ve seen in both the United States and Canada, led by Zespri SunGold and Zespri Organic SunGold, and supported with Zespri Green Kiwifruit.”

Woodyear-Smith is also positive about Zespri’s newly redesigned clamshell made from 100% RPET that is totally recyclable because it has no stick-on labels. The innovative new packaging, which was launched at this year’s Southern Exposure event, uses 8% less plastic.

“Zespri’s custom proprietary clamshell that is made from 100% RPET is a good example of their commitment to sustainability,” he says. “The packaging is fully recyclable because it no longer has a label, and instead has the Zespri logo embossed on the plastic.”