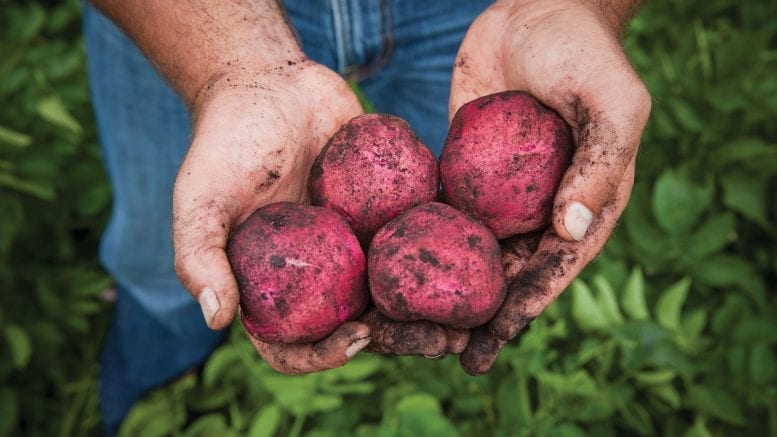 Throughout most of the year, potatoes grown in the Badger State are critical in supplying Midwestern and East Coast supermarket shelves. They also help retailers sell more produce.

Wisconsin grower-shippers cite logistical advantages. Because Wisconsin’s growing region is so close to the major U.S. population centers east of the Mississippi River, potato packers can send product to retailers in those states faster than Western growing regions.

“It’s our proximity to the market,” says Mike Carter, chief executive of Bushmans’ Inc., which grows and ships from Rosholt, WI. “We offer retailers lower costs in distribution. Fewer miles means lower costs. It’s that timeliness of getting product to the market. We are able to do it almost always overnight, which is a huge benefit to retailers. As we can deliver to our markets very quickly, it means less shrink for retailers because they will have less inventory in their warehouses.”

Wisconsin is also a major potato supplier to retailers in the South. “We are the largest supplier east of the Mississippi,” says Tamas Houlihan, executive director of the Antigo, WI-based Wisconsin Potato & Vegetable Growers Association (WPVGA), Inc. “The most important thing is to have fresh quality product. As we are so centrally located, we can deliver product overnight. Buyers can get fresh product when and where they need it. Retailers can count on outstanding quality and service from our shippers, who provide great service in terms of finding trucks and getting product to the market.”

“Wisconsin is conveniently located within a one- to two-day ride from most major markets east of the Mississippi River,” says Tim Huffcutt, marketing director with RPE, Inc., which is headquartered in Bancroft, WI. “This allows us to provide a wide range of potato varieties to retail, foodservice and wholesale groups with shorter notice than the Western growing states. Wisconsin shippers are able to take advantage of short notice orders, filling a short-term need for retailers, wholesalers and foodservice groups. In the same way, these groups get the advantage of being closer to the shipping point, to help them avoid out-of-stock situations.”

KNOWN FOR QUALITY, VARIETY
Dick Okray, president of Plover, WI’s Okray Family Farms, cites the state’s Healthy Grown program, which markets Wisconsin potatoes as being grown with fewer chemicals and accompanying conservation and land restorative programs. “The perception that Wisconsin is kind of a natural resource type of state helps sell our state,” he says. “For all the right reasons, we receive good credit for being environmentally sensitive to things that are going on.”

A combination of elements makes Wisconsin a favorable place to grow potatoes, says Sanford Gleddie, vice president of agriculture and business development for the Little Potato Co., which is based in Edmonton, Alberta, Canada. “Wisconsin’s location definitely helps with age of inventory,” he says. “You’re getting a product that hasn’t been sitting in storage as long as perhaps something from the other side of the continent. That’s a big deal and important for shelf life.”

Wisconsin’s quality is known nationally, says Okray. “All the sheds working here are capable of excellent grading, sizing and getting customers what they are exactly looking for, whether it’s packaged or individually-wrapped potatoes. Even with the bulk displays, produce managers are finding good quality. They are getting what they are asking for and making sure their deliveries are on-time.”

“The displays created excitement around a vegetable that could be overlooked,” she says. “We try to make those potato displays fun and as positive and educational as we can. Potatoes are an important part of our business in Wisconsin. People were buying a lot more potatoes.”

Wisconsin grows several different types of potatoes. “We are able to grow all varieties of potatoes so we can offer a full spectrum of potato varieties for our customers,” says Larry Alsum, president and chief executive of Alsum Farms & Produce, Friesland, WI. “Wisconsin’s fertile soil lends itself as an ideal place to grow eco-friendly potatoes. The sandy soil typography and seasonal climate allow us to grow a wide array of varieties available to supply our customers’ needs, including russet, red, white, gold and fingerling potatoes.”

In addition russets, reds, whites and yellow potatoes that Wisconsin grows, the state is also increasing its offerings of specialty potatoes, the creamers and fingerlings. Houlihan says many growers are growing for The Little Potato Co.’s Deforest, WI, packing plant. “Wisconsin is now a big supplier of specialty potatoes like fingerlings and an important supplier to the East Coast and the Midwest with all these different potato varieties,” he says.

The location has proved ideal for the Little Potato Co. “We were looking for a location in the East to service the Midwest and Eastern markets,” says Gleddie. “We were drawn in particular to the central sands region of Wisconsin, primarily because we felt it gave us a great opportunity to grow a very high quality fresh-eating creamer potato.

“There are other regions east of the Mississippi River in the United States that can offer some of the same things Wisconsin offers, but on a much more limited scale. We have good prairie lanes. It’s the soil, the climate, the capacity and the grower expertise. All those things come together and make it the right place to be,” he says.

All varieties are increasing in movement, says Alsum. “Red and gold potatoes continue to grow in consumer demand,” he says. “We are also seeing growth in the fingerling category and the gourmet blend of fingerlings and other blends, as well. We are testing several new varieties on our farm this year and are looking forward to new products to offer this fall. Creamer-size potato varieties continue to grow exponentially in demand. While small, the specialty potato category continues to grow.”

MIDWEST CONNECTION
Wisconsin grower-shippers and packing sheds distribute produce throughout the Eastern half of the United States, primarily from east of the Mississippi River to the East Coast, the Midwest and portions of Canada.

Local interest helps move Wisconsin potatoes at retail. “It’s our closeness, which means one, sometimes two days at the most deliveries to just about everywhere,” says Okray Family Farms’ Okray. “Locally grown, or close to locally grown, resonates with consumers, especially with Gen-Xers and Millennials. The idea of keeping the carbon footprint down is very helpful. They are trying to get as local as possible without having to truck product halfway across the country or more. That’s a big asset for us. It’s an easy selling point.”

If one draws a triangle between Minneapolis-St. Paul, Chicago and Milwaukee, a population of 18 million people living in that region emerges, which is a large number of shoppers. “We are three to five hours’ drive away from all of them,” says Bushmans’ Carter. “Being able to supply that big of a population in our backyard provides all sorts of services, including a product that is competitively priced.”

Wisconsin growers consider large Midwestern markets, including Chicago, Minneapolis and even Detroit, as being local to Wisconsin, says WPVGA’s Houlihan. “We are promoting our potatoes to those big cities as well as our own state,” he says. “More and more people want local. You just get a fresher product when you buy local.”

Sustainability is of keen interest to many of today’s shoppers. “Buying local and being close to the market and reducing the carbon footprint are all things that are important,” says Carter. “We are much closer to the population base, primarily to the East Coast and the South. This puts us in a unique position to supply the general population, where the population bases are, with identical quality and variety as some of the western states.”

Depending on the time of the year, Wisconsin’s market share in fresh potato shipments averages 10 percent to 15 percent. Although Idaho typically ships about half of all U.S. fresh potatoes, Wisconsin’s high demand in the Midwest and East allows it to be responsible for one out of every eight potatoes sold, says Okray. “Our industry as a whole is shrinking,” he says. “All the shippers that have survived are the ones that assure the quality leaving our sheds is the quality expected from retail.”