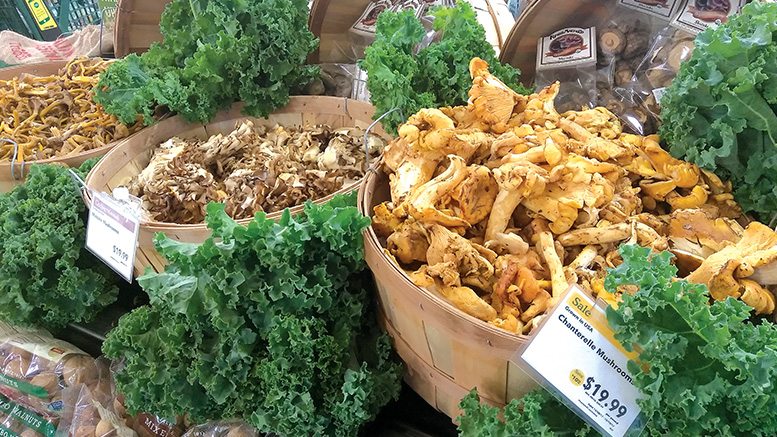 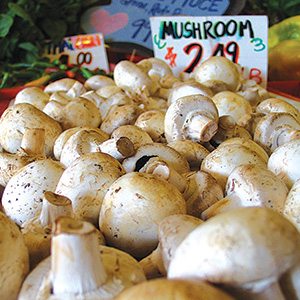 In the summer, mushrooms are the darling of the grill. Small ones can be added to shish kebabs; large ones can be grilled for vegetarian sandwiches and burgers, and sliced ones can be found atop garden-fresh salads.

But when the days start getting cooler and darker, consumers’ cooking habits change.

“Mushrooms are a great ingredient as people start doing more winter cooking,” says Greg Corrigan, senior director of produce and floral for Raley’s, a West Sacramento, CA-based company that operates 123 stores in Northern California and Nevada. “With stapled ingredients in heartier dishes such as soups, stews, and stir-fries. They can be stuffed with rich fillings for holiday parties or sautéed for a quick side dish.”

As consumers shift their meal planning, some aspects of mushroom promotions and merchandising need to change. People still use mushrooms as salad toppers and in meatless sandwiches, but they are also looking for new ideas for using these healthy fungi. When you become their resource for ideas and inspiration, you’ll see sales increase. There are plenty of interesting ways to do that.

According to Jeff Cady, director of produce and floral for Williamsville, PA-based Tops Friendly Markets, mushroom sales tend to spike in the winter months, specifically during December, January, and February.

Peter Wilder, marketing director for To-Jo Mushrooms, an Avondale, PA-based family-owned company that provides fresh, processed and value-added mushrooms, says sales tend to increase around the holidays when people include them in their favorite recipes. “It’s not so much the temperature that drives the demand, but more the recipes and larger serving sizes that utilize the traditional white or Baby Bella mushrooms,” he says.

When selecting mushrooms, consumers have plenty of options.

“The highest percentage of our business is in agaricus bisporus mushrooms, which are white mushrooms, Baby Bellas and Portobellos,” says Mike O’Brien, vice president of sales and marketing with Monterey Mushrooms, a family-owned mushroom company in Watsonville, CA.

“The traditional sliced white button dominates the category,” says Corrigan. “But there are many people moving toward specialty mushrooms; Shitake is the dominant specialty.”

Cady agrees. “The growth and interest is in the wild-mushroom segment, specifically Shitake and Oyster,” he says.

“Today’s shoppers are always thinking healthy but are really looking for flavor. Mushrooms can bring both those attributes to a shopping cart.”

There are several reasons exotic or specialty items have become so popular.

“So-called ‘wild mushrooms’ are popular on restaurant menus,” says O’Brien. “As more consumers are exposed to different types of mushrooms, they want to try cooking with them at home. Asian cuisine, in particular, is very popular with home cooks right now, which accounts for the growth in interest in many of these fungi.”

In addition to these factors, Kevin Donovan, national sales manager for Phillips Mushroom Farms, says consumers are drawn to the many health benefits of mushrooms. The specialty mushrooms particularly contain compounds that have been shown to fight cancer, arthritis and other health problems.

“Mushrooms are the only produce item with natural vitamin D, which is important not only for bones but essential for a healthy immune system,” says O’Brien. “Vitamin D is just as important for bone health as calcium. If you’re running low, the calcium you get from food won’t get absorbed properly, leading to thin and brittle bones.

“Mushrooms are low in calories and an excellent source of B vitamins and many minerals, particularly selenium, copper, potassium, phosphorous, zinc, and manganese,” he continues. “Wild mushrooms also contain phytochemicals, including L-ergothioneine, which studies have shown to have antioxidant properties. They are used medicinally throughout Asia for their immune-boosting properties.”

“Mushrooms are low in calories, fat-free, cholesterol-free and have more potassium than a banana,” adds To-Jo Mushrooms’ Wilder. 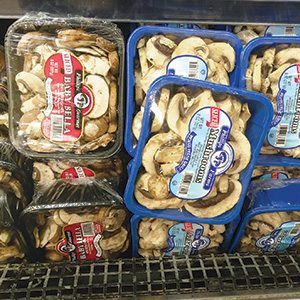 Not only are mushrooms healthy, but they also have plenty of umami, bringing flavor and savory meaty notes to any dish.

“Today’s shoppers are always thinking healthy but are really looking for flavor. Mushrooms can bring both those attributes to a shopping cart,” says Wilder.

“During the winter months it’s really about elevating them and giving them a purpose and use,” says Nikhil Arora, co-founder and co-chief executive of Back to the Roots, an Oakland, CA-based company that provides indoor gardening kits, including kits for growing your own mushrooms. “Whole Foods has done this really well. They have a program called Beyond the Button around Thanksgiving that’s about elevating all the different varieties. They help people discover and taste mushrooms, and understand what to do with them.”

Cooking demos aren’t required if you’re going to share recipes for using with specialty and conventional mushrooms. Consumers will appreciate recipe cards for tasty mushroom dishes set next to displays.

“Mushrooms lend themselves to the Mediterranean, as well as Asian seasonings,” says O’Brien, so look for recipes within those cultural traditions. Another idea is to share cooking ideas through social media and other promotions.

One trend is blending finely chopped mushrooms with ground meat.

“Mushrooms can be blended with ground beef or turkey to make burgers,” says Phillips Mushrooms Farms’ Donovan. “That’s a huge opportunity for retailers if they can cross-merchandise mushrooms with ground beef or turkey. Use small amounts of different mushrooms to give them a different flavor profile and make meals a lot more nutritious.” Doing this also lowers a dish’s fat and sodium.

Another idea is to use mushrooms as a protein-filled meat replacement for vegetarians, vegans, and people who are trying to eat healthier.

“We are carrying about double the selection that we carried in 2016,” says Tops Friendly Market’s Cady.

Josh Padilla, produce and floral operations coordinator with Krasdale Foods, a wholesale grocery company headquartered in White Plains, NY, says sales of stuffed mushrooms typically go up around certain holidays. “They seem to be popular for Halloween and football parties,” he says. “It’s not consistent and has to do more with what’s going on in that particular week.

“Don’t forget to order the large stuffer mushrooms around the holidays,” he adds. “People may be looking for them in their own recipes.”

Although consumers may have shifted to using mushrooms in cooked or baked dishes, not all have given up on the idea of cooking outdoors with them.

“People in Buffalo NY, don’t care what the temperature is outside,” says Cady. “Any day is a good day for outdoor grilling.”

Having fresh, attractive mushrooms is crucial to increasing sales.

“Mushrooms are definitely perishable, and they tend to dehydrate and brown quickly,” says Corrigan. “When they do that they become less appealing. Making sure displays stay fresh is important.”

Cady says the key is ordering. “White mushrooms need to be white, and brown mushrooms should be free of spots, specifically on the sliced varieties. Use every delivery to bring in fresh mushrooms.”

Monterey Mushrooms’ O’Brien, who notes that mushrooms are one of the most perishable categories in the produce department, says the best way to keep mushrooms fresh and looking great is through sophisticated category management. “This is done through the utilization of scan sales, purchases and shrink data, and matching demographics to your planograms,” he says. “Access to IRI or Nielsen data is also an important component of category management. We believe in partnering with our retail customers in collaborative category management. We offer a dedicated in-house team to work with our retail customers to help with customizable planograms, and work with them to collectively develop programs to increase transaction count and market basket.”

“Cross-merchandising is a necessity,” says Cady. “In the winter, we move to more versatile mushrooms, specifically Crimini. We place a row or two in the meat department near the roasts and steak. Also, tie white sliced mushrooms in with the packaged salads.” His stores don’t promote large Portobellos as much in the winter. Otherwise, they keep their selection and promotions largely the same.

One unusual option for cross-merchandising mushrooms is to place grow-your-own mushroom kits next to them.

Back to the Roots sells Oyster mushroom kits that come with a bag of soil inoculated with mushroom spores. Soak the bag in water overnight, and within 10 days a crop of mushrooms will begin to grow. “We see a huge spike in November,” says Arora. “We have two big seasons – the holiday and springtime.”

The kits are a great way to teach kids about where their food comes from and can provide fresh ingredients to consumers interested in local food.

“Local starts at home, and there’s nothing fresher than what you can harvest yourself,” says Arora. “Mushrooms are so delicate that by the time they hit shelves, they’re often pretty broken or dried out. The time from harvest to the shelf can be seven to 14 days, and mushrooms aren’t used to lasting that long. It’s night and day when you grow your own. They have almost a meaty texture because they aren’t dried out. You can really taste a difference.” Like grow-your-own herb plants, this can be a great impulse item for produce departments.

“As consumption begins to increase in the winter months, we’re starting to promote the larger pack size, which we haven’t done in the past,” says Raley’s Corrigan.

“We are still seeing sliced and whole 8-ounce packages dominating the retail shelves, but the trend to larger pack sizes and more varieties in both packaged and bulk is giving consumers an opportunity to see value in the category,” says To-Jo Mushrooms’ Wilder. “Look to merchandise larger pack sizes like a 20-ounce sliced or 24-ounce whole through the winter months. Consumers will appreciate the added value they get with the larger pack sizes.”

Arora suggests building big and attractive displays in addition to carrying larger packages. “People are used to stacks of apple and oranges,” he says.

Wilder says merchandising mushrooms in the winter is easy, as many of the seasonal produce items are limited. “Giving mushrooms an extra 2 feet in the display case or adding a secondary display while running a promotion, is a great way to see incremental sales,” he says.

“Keep on pushing a variety of mushrooms,” says Krasdale Foods’ Padilla. “And get to know your customers’ preferences so you can keep stock things they’ll find intriguing. Providing shoppers with lots of choices means you’re more likely to meet their needs.