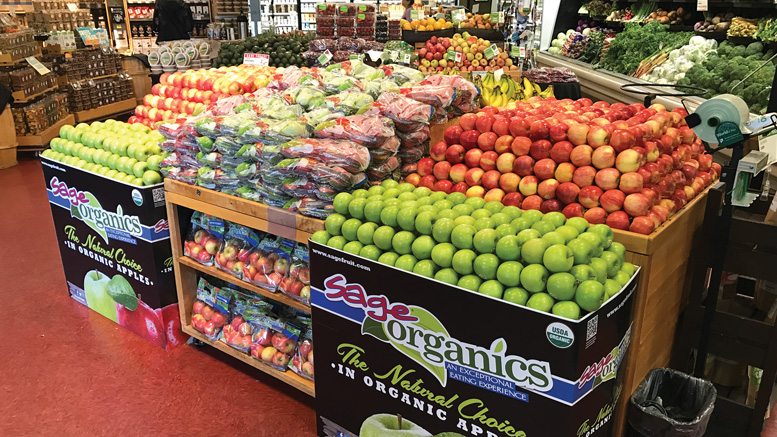 With a demand for year-round availability, controlled-atmosphere is becoming the norm. 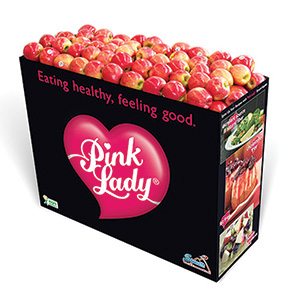 There used to be slim pickings when it came to apple volume and variety available after the New Year. Now, thanks to the technology of controlled-atmosphere (CA) storage, a practice that’s commercially existed for nearly a century yet not in ubiquitous use until the 1980s, there’s a buffet of fresh-tasting mainline and newer varieties to display, merchandise and promote at retail.

This is good news because the apple category has grown to be a potent contributor to department sales, totaling $49 billion and representing nearly 6 percent of total produce dollars during the 52-week period ending Sept. 30, 2017, according to Chicago-based Nielsen FreshFacts data.

“Normally, we slightly cool it off with apples when citrus and imports start in the winter,” says Jeff Cady, director of produce and floral for Tops Friendly Markets, a 171-store chain headquartered in Williamsville, NY. “This year is different. A shortfall in citrus from California and Florida created supply and cost issues, so apples will remain very strong in our stores. In general, apples represent a big percentage of our produce business in the winter. Bigger, in fact, on a dollar-for-dollar basis than imports like Chilean peaches and nectarines combined.”

Controlled-atmosphere storage, says Ryan Hess, apple buyer at Hess Brothers Fruit Co. in Lancaster, PA, “has made it possible for us to pack and sell firm, crunchy apples for a significantly longer time than we could before the advent of CA storage.”

One of the biggest shifts in the apple industry in the past several years is that most apples are now stored in some form of CA, according to Steve Lutz, senior strategist for CMI Orchards in Wenatchee, WA. “It used to be that CA storage was an official certification granted by the state. This required a minimum of 90 days under modified atmosphere or CA conditions, so the ‘opening’ of CA really meant something. There was nothing magical about 90 days. It is a superior-but-costly storage regimen, so in the early days, the official CA certification helped the industry capture a price premium over fruit from standard refrigerated cold rooms. Today, since nearly all our apples are stored under some type of CA system, we aren’t pushing for a price premium and therefore, don’t worry about waiting 90 days to earn the certification. We’re constantly opening and packing fruit from these rooms.”

CA storage enables growers and retailers alike to sell apples not only during the winter months but also year-round. 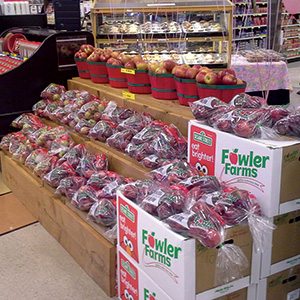 “We, as an industry, harvest apples once per year, typically between mid-August and early November,” says Chuck Sinks, president of sales and marketing for Sage Fruit Co. in Yakima, WA. “In controlled-atmosphere storage, we bring the oxygen levels in the rooms down to 3 percent, or even a little less, and add nitrogen. This, more or less, puts the apples to sleep, which then slows down their natural ripening process and allows us to pack them when we need to throughout the year. As far as appearance, flavor, and crispness, there really shouldn’t be much of a difference between newly harvested and CA-stored apples.”

Much more goes into CA programs than simply storing the fruit.

“We scientifically select the right fruit for longer storage periods, and we also put a lot of discipline into ensuring we’ll have a balance of varieties available to the market over the course of a year,” says Mike Preacher, director of marketing and customer relations for Domex Superfresh Growers in Yakima, WA. “Also, some varieties store better under different temperatures, so we have to make sure to store similar varieties in the same CA room.”

Customizing CA techniques with individual apple varieties along with better horticultural practices have enabled the industry to store newer varieties such as Honeycrisp and Pinata well into June, with additional months in development, says Roger Pepperl, director of marketing for Stemilt Growers in Wenatchee, WA. “We see year-round Honeycrisp on the horizon. Additionally, we are working on CA protocols that allow us to store organic apples even longer through the season. This has been an issue in the past. Today, we can take most organic apples into early to late spring with Fuji, Pink Lady and Red Delicious going almost year-round.”

What’s more, storage is now an integral part of bringing a new apple variety to market.

“We started experimenting with varying lengths of CA storage for our Lady Alice apples back when we initially had a 20-to-40 bin quantity,” says Andy Tudor, vice president of business development for the Rainier Fruit Company, Selah, WA. “This year, we’ll have the Lady Alice from October to May.” 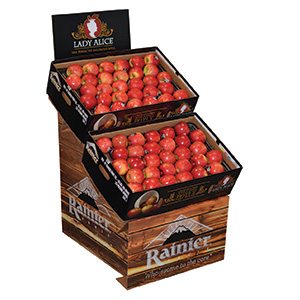 Think of apples in two categories: mainline and other, suggests Don Roper, vice president of sales and marketing for Honeybear Marketing in Elgin, MN. “Mainline include Red Delicious, Golden Delicious, Granny Smith, Gala, and Fuji. These store well and are available domestically for 12 months. In terms of others, the regionals, like Macoun, for example, don’t lend themselves to storage. On the other hand, some of the newer varieties like Pazazz are actually better-tasting after being in storage, since some of the starches turn to sugar. Therefore, we don’t start marketing these until December and January. In fact, the Pazazz is the Apple of the Month in December and January at several retailers.”

This month, Tops Markets is promoting the RubyFrost, a trademarked variety developed by the apple breeding program at Cornell University and first planted in 2011. “It’s the newer apples, like RubyFrost and Pinata, that we promote in the winter,” says Cady.

Jason Kazmirski, director of produce and floral merchandising for the 70 independent grocers that are part of Tukwila, WA-based Northwest Grocers, which operates under banners Thriftway, Payless Foods, Red Apple Markets and IGA Markets, says, “We’ll rotate in varieties like Jazz, Envy, Pacific Rose and Opal after the first of the year. This gives us a chance to highlight and tell the story of these newer high-flavor apples when the fresh-crop apples are done. Some of our retailers will carry five of the best, while others will carry 13 different varieties or more, including organic.”

The key piece in the winter is less about focusing on CA and more about resetting the apple category to leverage the opportunity with the new higher-margin varietal apples, says CMI’s Lutz. “These new varieties, like Kiku, Kanzi, Ambrosia, Envy, Jazz, Pacific Rose, etc., have really become the new winter apple opportunity because they really are the ‘what’s new’ story for shoppers.”

Some new, branded apples represent a more immediate opportunity than others. So it’s not just adding branded apple varieties during the winter months; it’s adding the right branded apples into the mix. 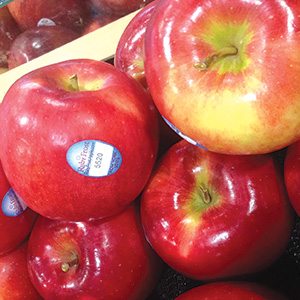 “That may sound obvious, but it’s surprising how many retailers get this wrong,” says Lutz. “Here’s an example: When I look at the top 15 retailers nationally for branded apple sales, 11 retailers had high-performance indexes for Ambrosia and Envy, with 9 being strong in Kiku. This isn’t a surprise because Ambrosia is, overall, the eighth best-selling apple in the United States. But when I looked at the 25 retailers with the worst performance in branded apples, none of these retailers had a strong performance in Ambrosia or Kiku, Kanzi or Envy, for that matter. These bottom-performing retailers were much more likely to put their energy and merchandising clout behind very small niche apple brands that generated little overall impact on category performance.” 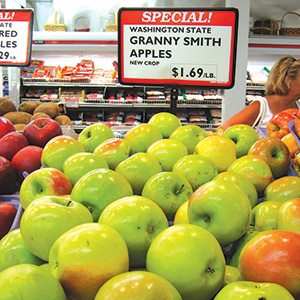 Citrus may move to the front of the department at retailers such as Tops Markets and those banners under Northwest Grocers. However, both Cady and Kazmirski say apple displays remain large and prominent after the New Year.

“I dedicate a lot of room to apples year-round. This includes apples in high-graphic display bins and on the shelf,” says Cady.

“We’ll promote apples next to citrus displays as well as near imports such as Chilean blueberries,” says Kazmirski.

Data clearly shows retailers that continue to promote apples and maintain assortment and display position maintain very strong sales from fall through spring, according to CMI’s Lutz. “The message these retailers give to their shoppers through merchandising and promotions is ‘apples are still in peak season.’ That’s the key. Keep promoting and maintain displays, and the consumers will stick with the category.”

On display, CA-stored fruit doesn’t necessarily need to be handled in any special way. However, the later in the season, the more likely apples are to bruise, says Scott Van Houten, logistics manager for Jack Brown Produce in Sparta, MI. “This means department employees should handle with care and regularly rotate. Also, refrigerated displays can slow respiration and loss of pressure.”

For example, to capitalize on football’s popularity in January leading up to the Super Bowl, Chelan Fresh offers small-sized apples in 3-pound poly and mesh bags, as well as high-graphic display-ready cartons with the Fuel Up to Play 60 logo. Fuel Up to Play 60 is a nutrition and physical activity program launched by the National Dairy Council and the National Football League aimed at students, ages K to 12. “We offer this program in any variety of apple the retailer wants,” says Mac Riggan, marketing director. “The benefit is more than 11 million children are exposed to the program in school, so recognition for the logo on the bagged apples is there.”