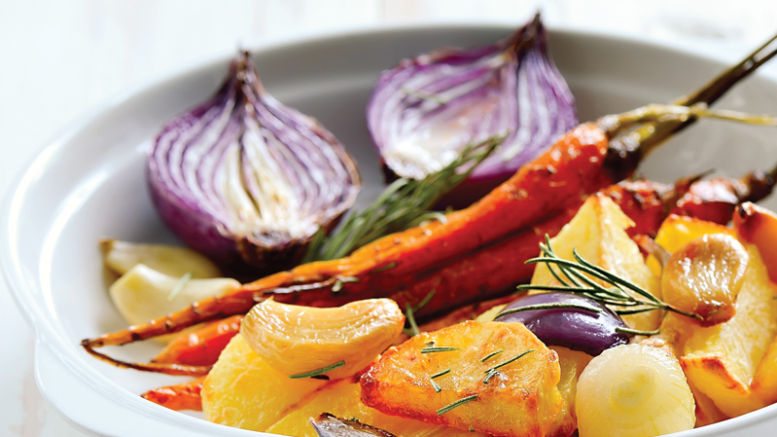 NRA survey casts fruits and vegetables in starring roles for 2016. 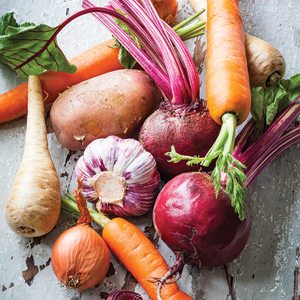 From trendy heirloom apples to perennially popular zucchini, the What’s Hot 2016 Culinary Forecast from the Washington, D.C.-based National Restaurant Association (NRA) predicts the menu items that will resonate with consumers in the year ahead. Fresh produce figures prominently in this year’s prognostications. In fact, locally sourced produce is No. 3 on the list of top food trends, trailing only locally sourced meats and seafood, which is No. 1, and chef-driven, fast-casual concepts at No. 2. Hyper-local sourcing, and natural ingredients/minimally processed foods — two trends in which produce often plays a big role — round out the Top 5.

Among the rising culinary trends to watch are produce-centric menus and restaurant concepts where vegetables are the star, says Annika Stensson, director of research communications at the NRA.

“This could be employed as a cost-management strategy as some key protein costs are elevated and a push toward nutritious menu items, but it’s also about celebrating produce in and of itself,” she says. The list includes everything from staple items, such as carrots and beets, to less familiar items like watermelon radishes, fiddleheads and kohlrabi.

“In the same vein, we’re seeing a wider variety of house-made and artisan pickles in many varieties well beyond cucumbers,” says Stensson. She mentions another element to keep an eye on in the near future is restaurants selling raw, high-quality ingredients, which include fresh produce items chefs use to create dishes on the menu.

In order to compile the list, the NRA surveyed 1,575 members of the American Culinary Federation in September. The chefs were asked to classify 221 items into one of three categories: “hot trend,” “yesterday’s news” or “perennial favorite.”

The hottest produce items on the list, following “locally grown produce” (77 percent said this was a hot trend) were heirloom apples (65 percent hot); 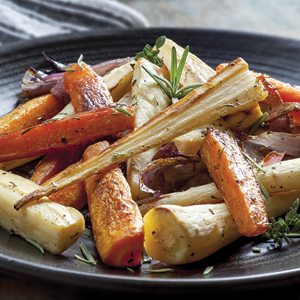 organic produce (63 percent hot); unusual/uncommon herbs such as chervil, lovage, lemon balm and papalo (63 percent hot), and exotic fruits such as rambutan, dragon fruit, paw paw and guava (59 percent). Some produce items that previously had been hot trends were seen as cooling off in 2016. These include kale salads (down 10 percent from 2015); fresh beans/peas (down 9 percent); dark greens (down 7 percent) and vegetarian appetizers (down 6 percent).

Some trends barely even had their moment in the sun before chefs deemed them passé. Wedge salads fall into this category, with 59 percent calling them “yesterday’s news” (along with insects, blood sausage, and bacon-chocolate combinations). Among the perennial favorites cited by chefs, zucchini was the only member of the produce family represented in the Top 10. It came in at No. 9, with 54 percent citing the soft summer squash as an evergreen menu item. (Comfort foods, which might include produce items such as mashed potatoes and other traditional vegetable dishes, made the perennial favorites list at No. 8.)

John Abels, lead instructor at Le Cordon Bleu Culinary Academy and one of the chefs who participated in the survey, says he was excited about the showing fresh produce items made on this year’s report.

“Produce is a main focus for chefs, with seven of the top 20 food trends having to do with produce in one form or another,” he says. “With dietary changes and a focus on back to basics across diners’ palates, it is no surprise that 23 percent of the top 192 food categories have to do with what we as chefs can do with produce and how we are meeting consumers’ needs.”

Chefs are “daring to be different,” says Abels, not only in the kitchen but in the bar as well, “through creative, innovative new [ideas] to get more nutritious produce options into consumer’s purview.”

“Customer palates continue to evolve, and with that comes great responsibility for chefs to focus on sourcing locally, being environmentally sustainable, and having a true connection with farmers and the land.”

Don Odiorne, vice president of foodservice at the Idaho Potato Commission, Eagle, ID, points out one of the hot trends on the list: root vegetables, which came in at No. 100 on the list with 48 percent of chefs saying they are “hot” and another 33 percent saying they are “perennial.”

“We’re seeing the return of the root vegetables, whether it’s parsnips or turnips, or even carrots, and they are being roasted almost to the point where they are being charred,” says Odiorne.

Another trend he points out is the popularity of offering breakfast at any time of the day, which often includes potatoes. In fact, serving breakfast for lunch or dinner was cited as “hot” by 41 percent of chefs and “perennial” by another 33 percent.

Potatoes are also being incorporated into ethnic items, including tacos, burritos and tortillas, says Odiorne. “You are also seeing potatoes incorporated into other ethnic dishes such as pierogies and empanadas, appearing not just on ethnic restaurant menus, but across the board,” he says.

“With dietary changes and a focus on back to basics across diners’ palates, it is no surprise that 23 percent of the top 192 food categories have to do with what we as chefs can do with produce and how we are meeting consumers’ needs.”

“We are also seeing a lot of fish dishes that years ago were paired with rice or pasta, and are now being paired with a potato hash,” he says. “With people looking for gluten-free options, potatoes can play an important role — giving restaurant operators a way to economically meet those demands.”

Sharon Olson, executive director of the Culinary Visions Panel, Chicago, sees several culinary trends pointing toward the importance of produce on menus in 2016. 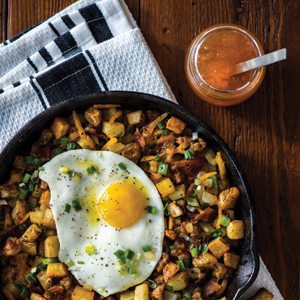 “The movement toward mindful dining has consumers rethinking indulgence with a healthy perspective that favors the produce business,” she says. “Sustainability has become a sign of quality worldwide, and verifiable sustainability is a compelling competitive advantage.”

Among the biggest trends she describes is the “rise of the veg-enthusiast.”

“Look for vegetable-centric — not necessarily vegetarian — cuisine to be the next macro trend influencing menus across all segments of the foodservice industry,” she says. “Vegetables are moving from side to center with new and aggressive cooking techniques like smoking and fire-roasting. Vegetables also have the ability to make many popular favorites ‘invisibly healthy,’ which is widely appealing to consumers.”

Other trends she sees:

• Conscious comfort in food: Consumers feel good about selecting foods that are “created with mindfulness for the people who grow, harvest and deliver their food,” says Olson. “The triple bottomline of people, planet and profits is gaining acceptance among many food businesses.”

• The new “agri-culture”: This reflects the evolution of farming to become a “revered and respected profession.” She notes this trend not only reflects a new generation of modern farmers approaching the profession differently, but also generations-old family farms that are “now turning to sustainable practices that are closer to the way their great grandparents farmed.”

• Root-to-stem cooking: “Creative chefs are embracing all parts of the vegetable, moving vegetables from compost to the kitchen,” says Olson. “From carrot tops to parsley stems, vegetables are making their way into imaginative preparations and garnishes and finding their own section on contemporary menus.”

• Beets are hot: Beets can be enjoyed in ice cream, Veggie Kefir, ravioli stuffing mixed with goat cheese, savory tea and kimchi, says Olson. Beet pearls, which come packaged like caviar, “provide little flavor bombs for beverages, salads and desserts,” she adds. Beets are being used in kids’ beverages, on sandwiches, and in salads and desserts.

• The next hot vegetable: kohlrabi. This versatile member of the cabbage family is popular in some cuisines, which incorporate its root, stem and leaves in various preparations. “Kohlrabi might be destined to become the new kale because of its unexpected versatility in hot and cold applications and its nutritional power,” says Olson.

Another of the key opportunities for produce items is their use in cocktails, Olson points out. The Culinary Forecast reports 70 percent of chefs cite culinary cocktails — those made with savory or fresh ingredients, for example — as a hot trend for 2016.

“Mangos have been one of the biggest trends here in the U.S. But they are No. 1 globally and No. 13 in the U.S., so what does the rest of the world know that the U.S doesn’t know?” 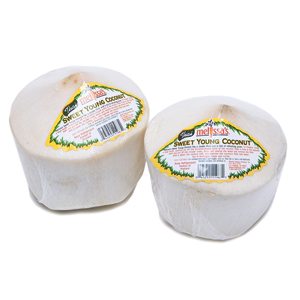 Turmeric root is No. 3 on Melissa’s list of specialty produce items in terms of sales growth in the last year, and that’s a key ingredient in juices and smoothies, says Schueller.

No. 2 on Melissa’s list of high-growth specialty items were mini-cucumbers, whose growth has soared since their name was changed from Persian cucumbers a few years ago, says Schueller.

He predicts mangos, No. 6 on Melissa’s growth list, will continue to grow in popularity as well.

“Mangos have been one of the biggest trends here in the U.S.,” says Schueller. “But they are No. 1 globally and No. 13 in the U.S., so what does the rest of the world know that the U.S doesn’t know?

“The mango is highly popular in Latin cuisine and Asian cuisine, but people are still learning about it in the U.S., and one day it might be the No. 1 fruit consumed not only in the world, but in the U.S. as well.”