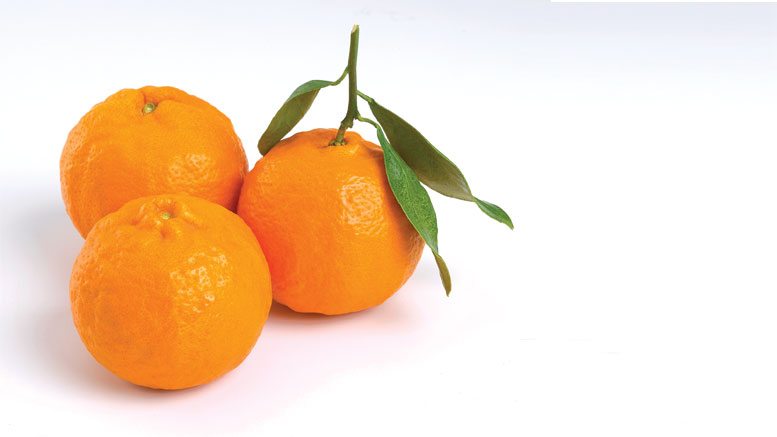 The biggest challenge with marketing specialty citrus isn’t overcoming customer uncertainty, but correctly labeling and identifying each item so it gets the proper ring at checkout.

During peak citrus season, produce departments can increase profitability by marketing specialty citrus alongside standard varieties such as Navel oranges and Eureka lemons.

The term “specialty citrus” means different things to different people. Robert Schueller, director of public relations for Los Angeles-based Melissa’s World Variety Produce, defines it as “varieties that are less commonly known to the average American. You can’t find them in every store you go to.”

Seasonality is also a defining factor in this category. “Specialty citrus refers to specific varieties not readily available year-round,” says Monique Bienvenue, director of communications at Bee Sweet Citrus, a family owned and operated company headquartered in Fowler, CA, in operation since 1987. “Most customers know that while a Navel orange will be available 365 days of the year, something more exotic like a Cara Cara is only available during its season.”

The peak of the variety citrus season starts as early as October, says Schueller. Many of the seasonal varieties last until March. That’s a short window of 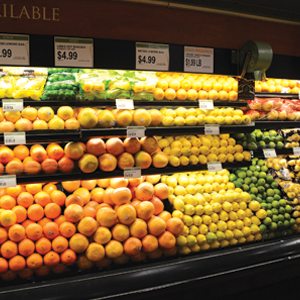 time to sell and promote these exotic fruits.

Getting consumers excited about specialty crops is easier than it used to be. Joan Wickham, manager of advertising and public relations with Valencia, CA-based Sunkist Growers, attributes interest in unusual produce largely to renewed interest in cooking and enjoying a variety of food.

“In today’s food-inspired culture, consumers are eager to learn about and try unique foods, offering many opportunities for specialty citrus,” says Wickham. “Specialty citrus is attractive to people who regularly purchase citrus because it offers them something different. It’s also interesting to Millennial consumers who are adventurous when it comes to food and eager to try new things.”

“Specialty citrus definitely appeals to both new and existing customers,” says Bienvenue. “While there will always be loyal individuals who look forward to buyingcertain varieties throughout the year, there is definitely a growing foodie movement all over America. These are the individuals who are interested in knowing how to make an ordinary meal better.”

There are specialty citrus varieties that have been in the U.S. marketplace for a long time. Others are new or remain virtually unknown. Among the specialty citrus varieties becoming more mainstream are Cara Cara oranges, blood oranges and Meyer lemons, says James Neumann, vice president at ValuMarket, a Louisville, KY-based chain with six stores. “They’ve definitely been our strongest sellers.”

Cara Cara oranges (also known as red Navels) are a cross between a Navel orange and grapefruit. “It is a very nice eating piece of fruit that resembles an orange but with pink flesh,” says Chuck Yow, director of U.S. sales and business development for Montreal-based Capespan North America. “While this is not a new variety, it is growing in popularity.” Capespan is one of the largest importers of citrus on the East Coast. 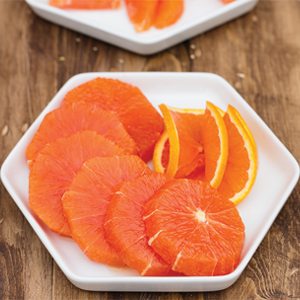 Cara Cara oranges are among the popular specialty citrus varieties.

There are four different varieties of blood oranges, but Moro is the most common. The fruit’s flesh is reddish in color, and the skin often has a blush of red on it. They have a berry flavor that complements the tart orange taste. Blood orange has been quite trendy in the last few years. Restaurants feature them in cocktails, main courses and desserts.

“Meyer lemons are thought to be a cross between a regular lemon and a Mandarin,” says Wickham. “They are a bit sweeter and less acidic than conventional lemons and have a refreshing herbal scent. A Meyer lemon’s rind can vary from bright yellow to a rich yellow-orange and has a soft, smooth feel.” The fruit is now available year-round, with peak supplies coming during the winter months.

Wickham reports Minneola tangelos are selling well with consumers. They’re a cross between a grapefruit and a tangerine with a distinctive knob-like formation at the stem end. Easy-peel versions of Mandarins and tangerines are also popular. “Gold Nugget Mandarins are a late-season variety that is also growing in consumer demand,” she says. “Ojai Pixie tangerines are another distinctive late-season, easy-peel variety. These tangerines are named for the lush Ojai region of southern California where they are grown. Pixies are small in size, as their name suggests, and are seedless and intensely sweet.”

“In today’s food-inspired culture, consumers are eager to learn about and try unique foods, offering many opportunities for specialty citrus. Specialty citrus is attractive to people who regularly purchase citrus because it offers them something different.”

Pummelos are also starting to catch on with consumers. Pummelos are the largest member of the grapefruit family. They have a green, very thick skin that hides red flesh.

Melissa’s regularly introduces new specialty citrus varieties in the United States. An interesting recent find is finger limes. Each fruit is about the size of a pinky finger, says Schueller. When cut open, the lime yields tiny beads of citrus that range from clear to pink in color.

“This is the fruit chefs call citrus caviar,” he says. “They’re expensive, but a little bit goes a long way.” In Asia, the beads are used in cooking and on sushi.

In the U.S. they’re included in mixed drinks. Finger limes are available from May to January. “The Kieffer lime is best known for its leaves,” says 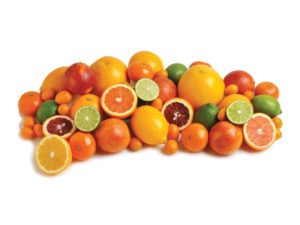 Melissa’s Schueller. “It wasn’t until a few years ago that they started harvesting the limes.” The limes are very wrinkly and typically used for the zest, which Schueller describes as “very zingy.” They are in season from October to late November or early December.

A calamondin is a cross between a kumquat and a sour Mandarin. The fruit is small, round in shape and ranges in color from yellow-green to orange. “A lot of people throughout the U.S. have calamondin as an ornamental tree in landscaping,” says Schueller. They have a pleasing sour flavor that makes them great for marmalade and jam.

“The problem with the Meyer and the Cara Cara is they look the same as the conventional lemon or Navel. Stores have to keep them well separated to keep a different pricing structure on them.”

Yuzu is a green-yellow citrus that’s about the size of a golf ball. It has a very distinctive scent and flavor that’s somewhere in the realm of a lemon/lime/grapefruit. It’s often used in ponzu sauce or beverages such as sodas and mixed drinks. Yuzu can also be cut into slices and served with main courses and seafood.

Sudachi was created by crossing two different varieties of Mandarin oranges. It originated in Japan. Like yuzu, sudachi is often used in beverages and fish dishes. 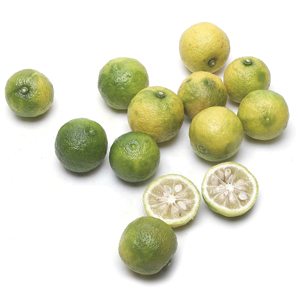 Yuzu, a green-yellow citrus with a distinctive scent and flavor in the realm of a lemon/lime/grapefruit, can be cut into slices and served with main courses and seafood dishes.

“More people are asking for pink variegated lemon,” says Dan Borboa, a sales representative with Capespan North America. These unusual fruits have yellow or green skin with darker green stripes. When cut open, they reveal a pink interior. Customers can make pink lemonade with no artificial coloring using these lemons.

To some extent, organic citrus can be marketed as a specialty crop because it’s so rare. “The organic citrus category continues to grow, but it can be difficult to source,” says Borboa. “On the import side it’s virtually impossible to get an orange that’s imported and organic. I don’t think there’s enough volume out there on organic citrus, but it is available.”

Sampling Is Helpful In Marketing

The best way to increase sales of specialty citrus is to let consumers try it. “Sampling works pretty well, especially on the red flesh oranges because they draw people’s attention,” says Neumann.

They also taste really good, which is very important, he notes. “If you’re selling something just because it looks good, you’re never going to get a repeat buy. It’s important to remember specialty citrus has to taste good.”

“Sampling and demos are most important with specialty fruit,” says Borboa. “Without sampling, people just don’t know what the item is.” It may take a few years for unusual produce to catch on, but he’s seen sampling campaigns for Cara Cara oranges work very well.

Patterson likes to do promotions with multiple prices so consumers can get a good deal on their desired quantity of citrus. Associated Grocers promotes one weight for $1, another weight for $2, and a third weight for $3. The retailer also offers deals when customers buy multiple bags.

Part of a successful specialty citrus marketing program is getting it in the right stores. “We have a pretty wide variety of customer bases,” says Neumann. One store has lots of shoppers who come from other countries, and it does really well with specialty citrus.

“Education is key when it comes to marketing specialty citrus varieties,” says Wickham of Sunkist Growers. “Sharing flavor profiles, usage tips and recipe ideas on point-of-sale materials help build consumer excitement. Since availability is limited on specialty varieties, specialty citrus is often sold at a premium. Retailers need to educate consumers about the varieties — what makes them special and how they are best eaten.”

Given that specialty citrus can be priced higher than other citrus — about 15 percent higher on average, says Robert Schueller, director of public relations for Los Angeles-based Melissa’s World Variety Produce — it’s important to label it properly.

“The problem with the Meyer and the Cara Cara is they look the same as the
conventional lemon or Navel,” says Dan Borboa, a sales representative with Montreal-based Capespan North America. “Stores have to keep them well separated to keep a different pricing structure on them.”

Another option is to sell specialty citrus in bags or clamshells. Many wholesalers package the fruit this way to ensure stores get the correct price ring.

“Typically your specialty citrus is merchandised by its comparative variety,” says Schueller. It should not be refrigerated, so standard display tables are a good place for it. But store managers shouldn’t limit themselves.

“When produce is seasonal, it needs to be in a prominent, high traffic location,” says Jeff Patterson, director of produce and floral for Baton Rouge, LA-based Associated Grocers. “It doesn’t necessarily have to be citrus with citrus.” The company likes to create stand-alone “fresh up front” displays to promote new items.

Yow with Capespan North America recommends looking for pop-up bins made specifically for certain varieties. “It separates them out and gets them off the shelf,” he says.

Good signage can also draw consumers’ attention. “Since you have that customer’s attention for such a short amount of time it’s critical for the suppliers to have shelf talkers and danglers,” says Patterson. “They shouldn’t have much verbiage, just a few sentences.”

Simply showing off what lies beneath the skin can help sell more specialty citrus. “Because a red flesh orange looks the same as a regular orange on the rack, the majority of our produce departments will keep one cut and shrink wrapped to draw attention to it,” says James Neumann, vice president at Louisville, KY-based ValuMarket. “They’ll do the same thing on the deep red grapefruit.”