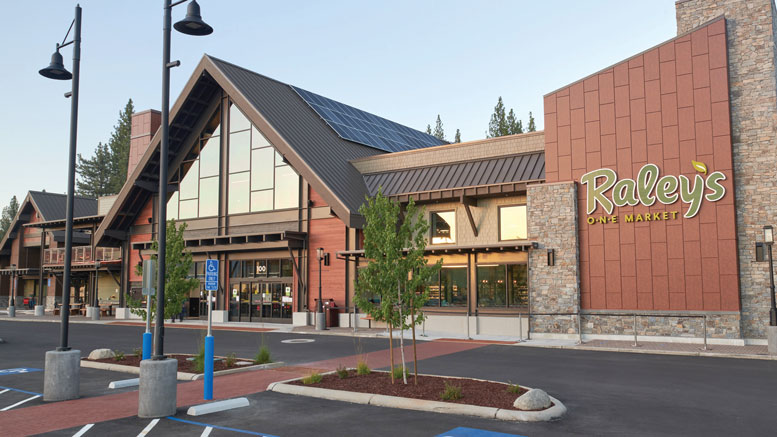 At 75% to 80% organic, the produce department, with its conspicuous placement, is a clear departure that takes the customer into new and only partially explored territory.

Raley’s new O-N-E Market concept near Lake Tahoe in Truckee, CA, is a store of its time and community, but one also designed for a future where increasingly important issues such as sustainability, clean food and organic agriculture are even more critical to shopping decisions than they are in the larger marketplace today.

The West Sacramento-based company, privately held and operating the Raley’s, Bel Air, Nob Hill Foods, Sak’n Save and Food Source banners, maintains that placement of the new 35,000-square-foot Raley’s O-N-E Market had a lot to do with the health-conscious, active community that lives in the vicinity. However, a critical consideration for Raley’s, beyond sales alone, is how consumers react to a store that prompts them to choose from better-for-you choices in just about every situation. In presentation to shoppers, produce is upfront in the store and critical to communicating the company’s intention: to provide food choices that support wellness in the narrow definition of the word, as to health, but also in the larger sense, embracing the community and wider world.

Michael Schutt, director of produce and floral for Raley’s family of stores, said Truckee provides an appropriate proving ground for the new store concept. “The idea behind our Raley’s O-N-E store, organic, natural and education, seemed the perfect intersection for those communities around the lake that are immersed in organic lifestyles,” he said.

The store gives Raley’s a chance to gauge customer response to O-N-E Market’s particular approach to produce and the rest of the food assortment at a time when consumers are thinking beyond what have been conventional parameters as to what they should be eating.

O-N-E Market takes from Raley’s 85-year commitment to exceptional service and a current emphasis on transparency and education to create a unique shopping destination with a highly curated product selection, as the company characterized it.

Raley’s recognizes that customers want to know where their food comes from, what’s in it and how those factors might impact their health and wellbeing. O-N-E Market not only stocks items that suit this mindset but also provides access to and information about healthier eating and how choice of products might affect the consumers who shop them. In many ways, O-N-E Market is the manifestation of Raley’s desire to promote health and happiness in the broadest sense.

As Schutt put it, “We’re a people-and-planet-first company.”

In pursuing that vision, Raley’s has removed private label sugar-sweetened sodas and tobacco products, while sourcing 100% sustainable fresh seafood, implementing Better-For-You check stands, promoted awareness and launched Raley’s Shelf Guide as a reference people can access as they need it. In 2018, the company opened a store concept dubbed Market 5-ONE-5, in downtown Sacramento, expressing its intention of bringing organics, nutrition and education to consumers by new means. On opening, Raley’s characterized O-N-E Market as the next evolution in this commitment to health, one that takes into consideration what it has learned from its corporate initiatives generally and Market 5-ONE-5 specifically.

O-N-E Market places a focus especially on transparency as to the qualities of each product and information that can help consumers make informed choices. The company maintains a list of banned food ingredients that don’t meet its definition of clean food and makes assortment choices based on it. However, Raley’s doesn’t take a one size fits all approach. The company has noted that it wants to help consumers find what best supports their health and wellbeing as each individual pursues unique wellness goals.

To make a point of its commitment to providing food that promotes wellbeing, O-N-E Market puts produce in the forefront, and consumers entering the store are introduced to a vista of fruits and vegetables on tables framed by a parade of refrigerated cases. In terms of proportions, produce represents between 25% and 30% of O-N-E Market’s overall square footage. “Produce has a much bigger stage than in a conventional Raley’s market, and organically grown produce and locally grown when possible are at the center of that stage,” Schutt said.

With seasonal variation, 75% to 80% of produce is “curated to be organic in nature,” he added. Although Raley’s developed O-N-E Market to emphasize choices between better-for-you brands and items, Schutt said the company also wanted to ensure the store functions as a full-line supermarket and, so, included some conventional products when organics were unavailable. That being said, the number and proportion of organic produce items has increased since O-N-E Market opened on June 27, he said.

“We didn’t want to leave any consumers behind,” he explained. “We wanted to make it a complete shopping experience for the community.”

Raley’s also wanted the O-N-E Market to be an affordable choice, so the product assortment is valued out to be effectively competitive with similar if more traditional supermarkets. “It’s an exceptional experience at a fair price,” Schutt said.

When it came to fresh cut, prepared and ancillary products in the produce section, Raley’s had an even broader range of considerations to ponder.

“With everything behind glass, packaged salads, cut vegetables, the dressings, the dips, we had to take a hard look and make sure we had clean-ingredient decks, and we’re offering more natural and better-for-you products than the rest of the chain might,” Schutt said. As with basic items, Raley’s has worked to increase the proportion of organic items in the cold cases since it entered operation. For example, the company went back and developed organic versions of hero items such as pico de gallo and chopped celery for O-N-E market that started out as conventional products at the store’s debut.

Although Raley’s has been moving toward more clean and organic food in general, Schutt said that O-N-E Market is a leap forward. For example, the organic product in most Raley’s stores comes in at about 15% of the department assortment. The new concept, at 75% to 80% organic, is a clear departure that takes the customer into new and only partially explored territory, a fact that the produce department, with its conspicuous placement, makes clear.

Still, the numbers don’t necessarily represent the impact of the produce section when someone walks through the entrance to Raley’s O-N-E Market, he pointed out.

“At Raley’s O-N-E, the message that’s fully expressed supports the vision of Raley’s mission statement of wanting to change how the world eats one plate at a time,” Schutt said. “When you walk into Raley’s O-N-E, I think you understand the message. It takes you by the hand and gently walks you down the path of your own personal wellness journey.”

In this case, gently is an important word because Raley’s O-N-E Market doesn’t overwhelm with a lot of glaring messaging and detailed nutritional charts. Instead, it provides personal nutritional advice through dedicated advisors in store to help individuals understand and address what their own particular needs might be. As an extension of that approach, Raley’s O-N-E Market offers the company’s first-ever Something Extra Health program, a new element in the company’s loyalty program designed to help customers with in-store tours and classes, personalized nutrition counseling and supplement recommendations offered by a full-time nutrition advisor and registered dietitian. In the end, though, what alerts customers to what Raley’s O-N-E Market intends is the product as it’s merchandised.

“We’re not telling a lot of the story beyond what’s staring the customer in the face,” Schutt said. “If we have a grower story, we will lean in on that. But the overall messaging starts with the store concept, why the store is different. We lean in on the organic story and education and better in essence. We’re taking consumers lightly by the hand and, whatever interests people have, we help with that.”