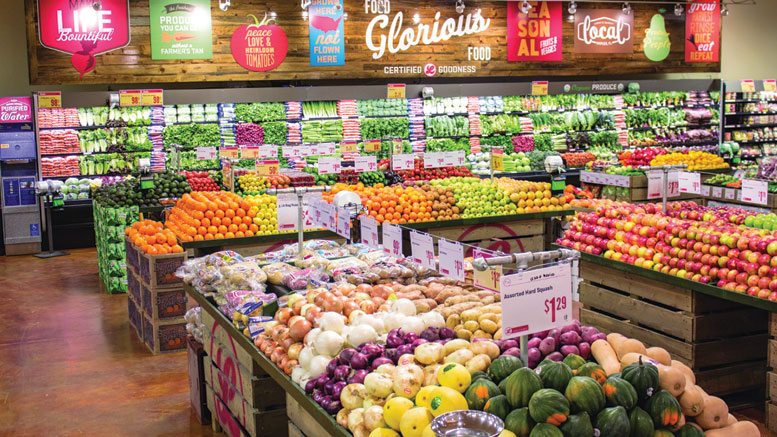 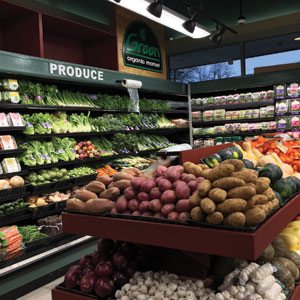 Organic produce sales continue to be among the most rapidly growing food market segments in the United States and Canada. Organic is no longer a fad. A testament to its anticipated staying power is the rise in investments by growers in organic fields and alternate regions in North America — the United States, Canada and Mexico — to meet increased consumer demand. With this demand and supply, however, comes pressure on retailers to reshape their produce departments in a way that satisfies consumers while maximizing profitability.

Organic produce sales do not appear to be slowing. “According to Nielsen Fresh Coverage Area (FCA), for total U.S. latest 52 weeks ending Oct. 29, 2016, and Power of the Organic Produce Shopper, Homescan Panel, June 2016, organic produce grew at four times the rate of conventional produce and now accounts for one-tenth of all produce dollar sales,” says Sarah Schmansky, director of Nielsen Fresh, New York. “Organic produce is up 13.6 percent in dollars and 14 percent in volume.”

Canada is also experiencing tremendous growth. “We are still seeing an increase in demand for organics across all categories,” says Christina Yli-Luoma, business development representative for Canada at Coquitlab, British Columbia-based Oppy. “Organics are present and highly visible in virtually all channels, from club stores to high-end to value-based retail.”

Fresh Facts on Retail, a quarterly from United Fresh, reports a similar, but slightly different trend from Nielsen, with berries, apples, value-added, citrus, melons, avocados and cherries up; grapes and bananas were reported to be down. Among the Top 10 vegetables, all were up with the exception of lettuce and packaged salad; and value-added enjoyed the most rapid growth.

“While our hottest items are staples such as tender leaf spring mix and baby spinach, demand is up for mature vegetables such as full-size kale, beets and green cabbage for chopped mixes, and nutrient-dense vegetables, including collards, chards and beet tops in blends and kits,” says Will Feliz, president, Duncan Family Farms, Buckeye, AZ. “The American palate has changed in the past decade, and our processor clients are looking to capitalize on that.”

Organic produce, once a niche in certain states, today enjoys popularity across the United States and Canada in specialty stores and grocery chains alike. “Not surprisingly, organic is popular in Colorado stores, with our stores stocking up to 70 percent organic, compared to the national average of about 12 percent,” says Steve Oates, vice president, produce/floral, Lucky’s Market, Niwot, CO. “But we’re seeing fastest growth in the Midwest.”

Different types of organic items may appeal in particular urban, suburban and rural areas of a region. Four Seasons Produce in Ephrata, PA, services the Middle Atlantic and Northeast. Jon Steffy, director, sales and retail services, says that root vegetables do particularly well in the Northeast. “Maybe it’s the colder climate or that the Northeast is more in tune with seasonality.” Steffy says he doesn’t see a lot of differences among the big, Northeastern metro areas, but that organic is less prevalent in smaller interior cities. Ethnically diverse areas favor some items over others. For example, tropical fruits in some neighborhoods and Asian vegetables in others.

“Western Canada has long been in the lead on organics, but central and Eastern Canada, especially the larger cities, are becoming much more active now. Not surprisingly, organic sales in the metro areas of British Columbia, Ontario and Quebec eclipse the rural and suburban areas. In the past year, Alberta has enjoyed an increase in organic sales, with Calgary leading this charge from what we have seen. In Saskatchewan and Manitoba, we are still seeing the growth of organic coming up very slow in comparison to the other areas in Canada,” says Yli-Luoma.

Growth in the organic marketplace is driven in part by factors other than geography, including demographics, family composition, lifestyle and desire for convenience. Nielsen found today’s organic produce shopper tends to be more kid-focused than the average produce shopper on over-indexes for income of more than $100,000, age under 35 years, children under 6 years of age and college degree.

Store format also influences organic trends. Nielsen discovered three-quarters of shoppers go to their preferred grocery store or supermarket chain to stock up on organic fruits and vegetables. Simcha Weinstein, marketing director for Albert’s Organics in Glassboro, NJ, points out that “the convenience of shopping at the chains puts pressure on larger retailers to see organic produce not just as a niche, but rather as a full category.”

Industry executives also foresee pressure on stores to adapt their delivery systems. Millennials living in urban areas — often without car ownership and using digital technology to manage their lives — expect to be able to shop for produce online. Weinstein says, “this will force retailers, especially those farther outside of town, to re-think their models. The food delivery system is changing at a rapid pace and chains have to adapt quickly.”

Organic growers rapidly are expanding their fields, particularly in the Northeast and Southeast. “We are expanding to multiple growing locations with pilot operations,” says Duncan Family Farms’ Feliz. “When we can better serve regional processing plants, retailers and consumers gain access to a fresher and more local product with a longer shelf life.”

Canada has seen an influx of hydroponic and greenhouse growers who offer similar benefits to organic, namely sustainability, food safety and local. Ryan Cherry, senior sales manager for Windset Farms in Delta, British Columbia, Canada, observes that “trends in the marketplace point to having an abundance of great tasting varieties to choose from, particularly in the tomato category. Canadian consumers have shown they are willing to pay for local; however, they expect a consistent and high-quality eating experience.” 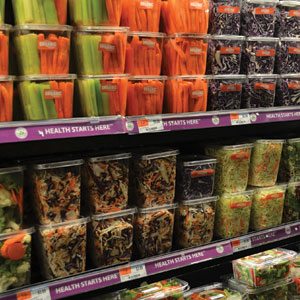 With almost every item in the produce department having an organic version, finding space can be challenging. Retailers face strategic decisions on how to make room — whether cutting SKUs of conventional, shortening a display or acquiring more space from other departments.

In Canada, Yli-Luoma says, “retailers can be eager at times to drive organic sales by removing the conventional equivalent and only list the organic. This is usually only done when the price is comparable to conventional, however. Other retailers have success with dedicated organic sections. Conventional shoppers may be willing to buy organic if the price is right but committed organic shoppers may switch to a different store if organic options are not available in their store of choice.

“Retailers can be eager at times to drive organic sales by removing the conventional equivalent and only list the organic. This is usually only done when the price is comparable to conventional, however.”

Four Seasons’ Steffy services a number of smaller stores in metropolitan areas, where space is a premium. His retailers often cut back footage, but not SKUs. For example, dropping an iceberg lettuce display from 4 feet to 2 feet to make room for organic. Cherry of Windset Farms notes urban stores may need to accommodate a greater selection of varieties in smaller-sized units for “on-the-go” urban lifestyles, while areas outside of major city centers need space for “value” offerings in line with the demands of growing families.

Produce trends such as value-added and pre-cut continue to pose challenges to retailers. M&R Farms, Kingston, NY, is meeting demand for larger-volume salad
bowls and kits with products in family- and party-size bowls; and these require more display space.

Brian Gannon, regional sales manager for Pero Family Farms in Delray Beach, FL, says that all regions are seeing increased demand for more convenient choices, particularly value-added and pre-cut that happen to require refrigeration. “Refrigerated space in stores currently is severely challenged, and it has been difficult for retailers to go through SKU rationalization attempting to open up more space. Organic assortments require proper temperature controls. A majority of the produce departments to date were built before this trend, and the footages designed into those blueprints are fixed. Trying to take away current high-performing SKUs in order to add in what’s trending is a very difficult dance.”

The 2016 New York Produce Show featured new organic items that will be jockeying for space in the stores. The popularity of crumbled cauliflower is ushering in a similar new product — broccoli crumbles. Colorful combos are hot in baby carrots, slaw shreds, fingerling potato combos, and hot and sweet specialty peppers. Also expected from Pacific Organic are a dependable supply of winter organic Brussels sprouts (in a joint venture with Mexus, a Mexican based grower/shipper), a year-round supply of organic asparagus and a wider variety of vegetable lines. Among the growing number of products that offer the benefits of sustainability, safety, and local but without organic certification are more varieties of hydroponic and greenhouse produce, as well as “living” herbs and lettuce mixes.

National Organic Program regulations require retailers to either segregate organics or put them in bags to prevent contact with conventional items. While packaging seems to run counter to environmental consciousness, it offers benefits to the retailer.

“We typically display bulk rather than packaged,” says Lucky’s Oates. “But packaging and labeling help chains correctly identify and ring up organic items at the front end of the store. Packaging and labeling also allow buyers, managers and consumers alike to learn more about — and be loyal to — brands that align with their organic philosophy and expectations.”

“Just as with conventional, the pouch bag has taken off and continues to grow,” says Steffy of Four Seasons. “High-graphic pouches for apples, citrus, tomatoes and grapes, to name a few, help items sell. And most are recyclable.” He adds that overwrapping of organics — ideally on biodegradable, compostable trays — is likely to continue so that items get rung up properly.

Nielsen reports nearly all organic produce categories show both dollar and volume growth. “Dollar growth is due in part to increased prices across some, but definitely not all, categories. Many produce categories, including berries and specialty vegetables, are decreasing price within organic but still driving enough volume to produce dollar growth,” says Nielsen’s Schmansky. On one hand, economies of scale and new organic fields can be expected to bring down retail prices. On the other, displacement of conventional with organic, weather conditions and changing economic environments could lead to costlier organics.

For now, the Midwest stands out. Oates says availability of organics is rising, and shoppers are curious. “Ads work particularly well, especially when prices of organic and conventional are similar. In contrast, shoppers in Florida are more familiar with organic and less resistant to price. But if price of an organic item doubles, the average Florida shopper is likely to switch to conventional, while the hardcore organic shopper may do without the item altogether.”

Mexican growers, in particular, have upped acreage and production of tomatoes, cucumbers, zucchini, hard squash, eggplant, onions, jicama and kale, among others. Steffy observes that increased availability pushes down average sales because grocers drop prices in order to move items. “If growers don’t get the returns they hope for, they may reconsider the volume of their organic production.”

Another trend, proprietary and exclusive relationships among growers, suppliers and retailers, could limit availability and increase prices of certain items.

Differences between Canada and the United States may become greater in 2017. Canada’s Food Price Report 2017 projects rises in vegetable prices of up to 6 percent and fruit up to 5 percent — impacting imports and exports — if U.S. policy changes with a Trump administration, and other drivers including currency fluctuations and La Niña weather patterns. The report predicts above-average increases in food prices in Ontario and British Columbia and lower than average increases in Newfoundland and Labrador, New Brunswick, Quebec, Manitoba and Alberta as a result of a weaker economy and/or a more competitive food distribution landscape.

At the end of the day, retailers who watch trends, know and understand their shoppers, price and market organic items wisely, and communicate well and often with both suppliers and customers can remain in organics.