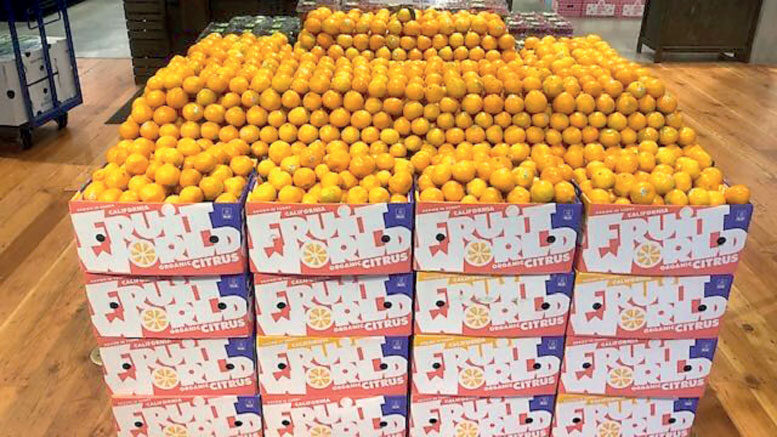 The foundation items — oranges, mandarins, grapefruit, lemons and limes — have the most tonnage and largest volume.

If you look at the COVID cup half full, the pandemic provided a shot in the arm to boost healthy eating. In fact, 46% of consumers said they wanted to eat more healthy in 2022, making it the highest-ranked lifestyle change, according to a January released survey by Nextbite, a virtual restaurants leader headquartered in Denver, CO.

The citrus category — especially organic citrus — brimming with immune-boosting vitamin C, has benefited. Case in point, organic citrus was a strong performer in 2021, with double-digit increases in sales (10.6%) and volume (13.4%) over the year prior, according to the State of Organic 2021 report, released in February by the Organic Produce Network.

“During the pandemic, all citrus picked up due to the health value. Organic sales are less than 10% of our business, but items like salads, kale, carrots, apples, and citrus are the heavy lifters,” says Mark Hendricks Sr., produce director at Pyramid Foods, a Rogersville, MO-headquartered nearly 50-store retailer whose banners include Price Cutter, Save-A-Lot, and Country Mart.

U.S.-grown organic citrus and organic limes from Mexico collectively supply retail shelves year-round. However, there are seasonal variations in specific types of citrus.

Some 90% of California-grown organic citrus is harvested and sold from October to May, according to Craig Morris, category director for citrus and grapes at Homegrown Organic Farms, in Porterville, CA. “Our fruit comes from farms within a 250-mile radius, so we’re usually among the first to start and have fruit right through to the end of the season.”

Wintertime is the peak season for varieties like organic variety tangerines, blood oranges, Cara Cara oranges, Cocktail grapefruit, Pummelo grapefruit, Oro Blanco grapefruit, and kumquats, adds Robert Schueller, director of public relations for Melissa’s/World Variety Produce, based in Vernon, CA. “In the winter, 2021 versus 2022, we saw a 17% increase in the sales of the variety organic citrus category.”

In the spring, Schueller adds, the varietal sales decreased to 14% due to the end of navel orange, variety tangerine, kumquat and variety grapefruit season.

Navels, tangerines, grapefruit, lemons and limes are the top-selling organic citrus at New Seasons Markets, a 19-store chain headquartered in Portland, OR. “We carry the standards. When it comes to large quantities of a certain size, organic isn’t there yet. It’s not as evolved as conventional citrus in terms of volume,” says Jeff Fairchild, produce director.

Indeed, it’s the foundation items — oranges, mandarins, grapefruit, lemons, and limes — rather than specialty varietals that have the most tonnage and largest volume, says Homegrown Organic Farms’ Morris, who calls them “the hardware items of the category.”

Organic navel oranges and Valencia oranges increased 12% and 7%, respectively, in sales between 2020 and 2021, according to company-specific data shared by Melissa’s/World Variety Produce. For organic grapefruit, the dollar percent increase was 9%, with 17% for lemons and 16% for limes. Of note is that the sales increase for variety oranges (Cara Cara, blood), variety tangerines (satsuma, pixies) and variety grapefruit (Pummelo, Cocktail, Oro Blanco) averaged 9% to 18% during this time.

“We did try organic Minneola without much success, but have done well with Gold Nuggets,” says Homegrown Organic Farms’ Morris, whose offerings also include clementines and Meyer lemons.

Organic mandarins will soon be a bigger slice of offerings from Fruit World Co., a family-owned grower based in Reedley, CA, says Bianca Kaprielian, co-owner and chief executive officer. “Over the next two to three years, we are converting more of our acreage into organic mandarins due to demand.

Mandarins are a big pull into the produce department.”

Fruit World’s program starts in early November with organic Satsumas and clementines, and continues into April with additional varieties.

The company is also expanding its acreage on organic navels, including heirloom navels, and has planted organic mandarinquats, kumquats and lemonade lemons.

There is a growing interest in organic limes, says Nicolas Giraldo, director of product management, limes, at Delano, CA-headquartered Wonderful Citrus. “Given this interest, many major national retailers have encouraged us to offer organic limes. We have organic Persian limes available year-round, with variations in availability throughout the year. Although we have a limited volume, organic limes have proven to be an advantageous addition to our lime offerings. We have identified new supply countries that are expanding their organic lime crops to fill the gaps in supply during certain windows of the year.”

The organic shopper doesn’t want packaging, but the retailer would rather have organic packaged to assure the right ring, says New Seasons Markets’ Fairchild. “We offer 3-pound organic navels, Cara Caras and grapefruit. Our organic bagged fruit has increased 40% in sales, but 80% of our organic citrus is still sold bulk.”

Organic citrus, on average, commands a price premium of 49% over its conventional counterparts.

Sunkist Growers has introduced new packaging for its organic line of citrus this year.

“The packaging promotes sustainability with a paper net header and cotton thread for more convenient recycling. The design celebrates our California heritage, too, with the return of the popular Sunkist lollipop logo. The retro logo symbolizes the sustainable farming practices used by our grower members, which we know is an important deciding factor at retail for today’s shoppers,” says Ward. “The new packaging resonates with millennial and Gen Z shoppers, as more than half of respondents in a recent Sunkist commissioned study felt the retro lollipop logo brings about positive emotions.”

Starting in November, in advance of Thanksgiving, and right through February, build big organic citrus sets that take advantage of the greatest variety available, recommends Fruit World Co.’s Kaprielian. “The old adage, ’pile it high and watch it fly’ holds true. Go big on displays, especially at the start of the season to let shoppers know its peak season for citrus.”

As for integrating versus segregating organic and conventional fruit, Kaprielian says it depends on region and shopper. “That said, if a retailer has always displayed one way, try another. It’s the dawn of a new era in this post-pandemic world and changing up display methods might increase sales.”

At Pyramid Foods, organic citrus is usually grouped together on endcaps or tables, says Hendricks. “Many times, like in the case of lemons, we venture outside the department to places like the seafood shop or refrigerated or dry tea aisles in grocery.”

Limes could be considered a staple in some households, however, it’s still important to put limes on display during key consumption windows, like during the summer, adds Wonderful Citrus’ Giraldo. “Cross-merchandising with complementary items such as avocados could also drive incremental sales.”

Since in-store is the No. 1 source of awareness for citrus shoppers, Sunkist offers a robust marketing and merchandising program to support retailers with display bins and point-of-sale (POS) materials for all organic citrus varieties, including navel oranges, lemons, California mandarins, and specialties like Cara oranges, blood oranges, and Minneola tangelos, according to Ward. “New organic packaging and merchandising include the display master, full carton, organic lemon 1-pound net and pouch bag, and the 8-pound Valencia orange combo bag.”

“We advertise four items each week in our ad circular and oranges, easy peelers, lemons, and other fruit items seem to be the most popular. Our customers do a lot of juicing and the lemons, and oranges are naturals,” says Pyramid Foods’ Hendricks.

Price promotion helps, but consistently stocked displays are an effective way to promote organic citrus, says Melissa’s Schueller. “So is signage and education at the display, letting shoppers know why organic costs more.”

Organic citrus, on average, commanded a price premium of 49% over its conventional counterparts, according to the OPN’s State of Organic 2021 report.

“Due to this price differential, retailers will often carry a 3-pound bag of citrus in the organic and a 4-pound size in the conventional. Also, taking advantage of different sizes of organic fruit, based on where the crop is sizing, can help narrow the difference in sticker price,” says Homegrown Organic Farms’ Morris.

Telling the story behind how organic fruit is produced can provide shoppers with a value-add to explain the higher pricing.

“Consumers are increasingly conscious about what foods they purchase,” says Wonderful Citrus’ Giraldo. “Our lime program is Fair Trade Certified, which ensures that a portion of sales is invested directly back into the communities where they are grown. Educating consumers about where their food comes from can often influence them to choose organic citrus, instead of selecting purely based on cost.”