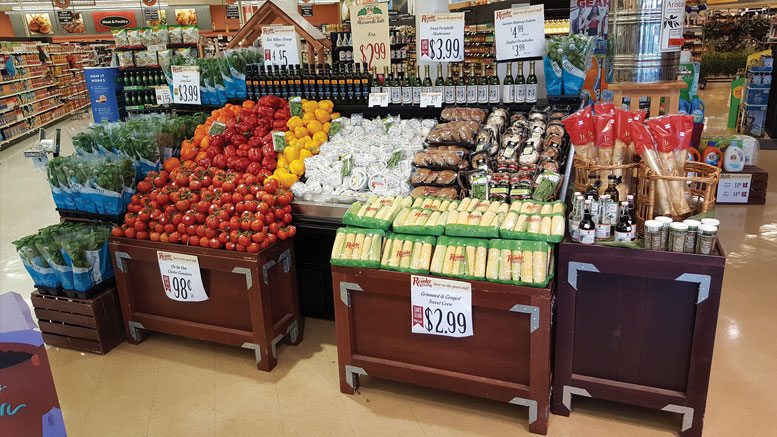 Remke Markets is an independent retailer with 10 locations in Southern Ohio and Northern Kentucky. The company’s headquarters is located just southeast of Cincinnati in Erlanger, KY.

The Remke story begins in 1897 when William Remke opened a meat market in Covington, KY, just across the river from Cincinnati. The store quickly expanded into larger and larger locations, with the third store remaining in a single location for nearly seven decades. Other locations were opened as well. Control of the Remke’s operations has been passed down from one generation to the next, and today Matthew Remke represents the fourth generation to run his family’s business.

Remke receives produce from its main supplier, Eden Prairie, MN-based SuperValu, but also purchases from local wholesalers. “We have a warehouse attached to our corporate office here in Erlanger,” says Dennis Adelsperger, director of produce and floral. “We bring in and support local products as much as we can.”

The chain’s main supplier delivers direct to stores but Remke also buys from suppliers who deliver to its warehouse where it is then redistributed. “We deliver five days a week consistently, so we keep the product fresh for customers at all times,” says Adelsperger.

To get produce departments on track across locations, Remke employs a universal sales plan. “We have a variety of stores with different format size, so depending on the square footage of the store, that’s how they (produce managers) plan their sales,” says Adelsperger.

“We have a master sales plan we send out weekly, but as far as a produce manager in the Remke organization, we allow our management team to make store-by-store decisions based on their community and customers.”

Different stores have customers who are interested in different products so produce managers have the flexibility to cater offerings to their customer’s tastes and that holds true for displays as well. “The stores have the ability to build their displays as their sales warrant,” says Adelsperger.

To merchandise items in produce, signage is created at both the in-store and corporate level which highlight seasonal items. Remke also classifies certain unique products as ‘story items’ and uses signage to tell that story and to call out what makes it unique to Remke.

“A perfect example would be a snapdragon apple,” says Adelsperger. “We brought in that item direct, and it was something that was only available through us, so we told the story of the unique apple to help educate the customers on something new.”

Store associates are also familiar with the story behind these items, which further bolsters a personal connection with customers. “For the consumer who is used to the same apple or the same variety of fruit everyday, in order to educate them, we challenge our employees to really sell that to the customer and explain what’s unique about it.”

Each store holds weekly management meetings where associates and store managers outside the produce department are able to sample new products. This practice, according to Adelsperger, makes sales associates better educated, better in their work and helps build a better, more personal relationship with customers.

Salad bars featuring new and unique items on a daily basis can also be found in most Remke locations. “Most stores do have a salad bar and it does feature hand-cut product that is done by a designated employee in charge of the salad bar,” says Adelsperger. “Some stores will do a lunch calendar where they will have a unique salad every Wednesday and then they’ll change it up on Thursday just to add uniqueness to the salad bar.”

Remke puts out a circular each week featuring produce items. The circular and other advertising presents further opportunities to tell a product’s story. According to Corey Strotman, director of marketing for Remke, “When we are featuring some of the exclusive or local products, we’ll do a story on that product in the ad as well. On occasion, we’ll do digital billboards with produce. We always include a produce item when we do TV commercials or radio. We do a little bit of everything. Produce is a big selling point for the company in general.”

Community is also a big part of the Remke organization. “We’ve been around for more than 100 years in a very competitive market and what has got us to where we are today is our associates and the relationships they’ve built with the community,” says Adelsperger.

The company’s long history in Southern Ohio and Northern Kentucky, combined with the relationships the company has built with customers and employees and its reputation for fresh products, has helped Remke Markets grow into a thriving business that has now spanned across three centuries.