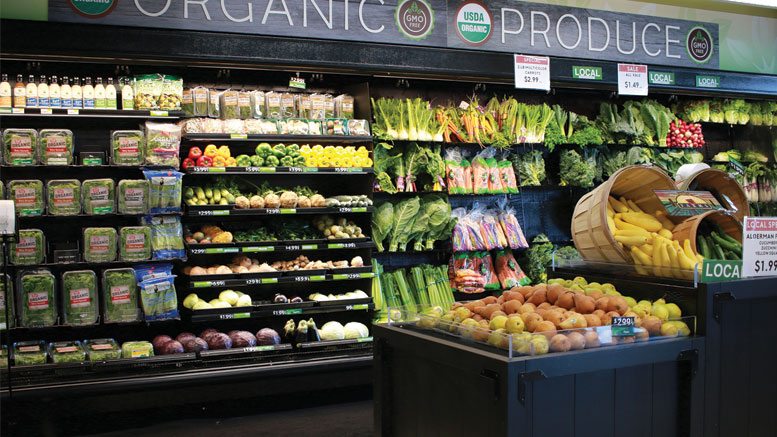 More than just a store, 4th Generation educates consumers and promotes organics and a healthy lifestyle 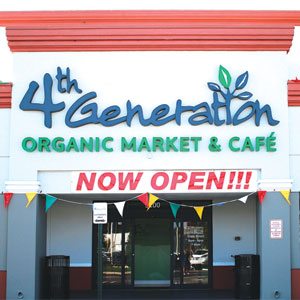 Having an organic section in the produce department is pretty standard these days. Grocery store shoppers are increasingly on the lookout for organic foods; in fact, according to the Organic Trade Association’s Produce Deep Dive report from October 2016, consumer spending on organic produce has increased 123 percent in the past five years.

Having a produce section that’s entirely organic is another story entirely. But it’s the path that leaders at 4th Generation Organic Market & Café in Boca Raton, FL, have chosen to travel. Everything in the store — from produce and dry goods to deli items and catered foods — has the organic designation.

It’s an unusual business strategy, but it seems to be working. The business recently opened a second, larger location to better serve its loyal customer base. Produce sales in both stores continue to climb, demonstrating that its strategy for selling fruits and vegetables is working.

“4th Gen,” as they sometimes refer to themselves, is owned and operated by Ben Litowich & Son. The business’s experience with the produce industry dates back to 1910. Ben Litowich was just 16 years old when he started a produce company in Michigan. Over time his import and distribution business expanded and opened warehouses throughout the United States.

In the 1960s, Bud Litowich, who took over the company after his father’s death, opened a seasonal office in Florida. Two years later, he moved his family there and made the Sunshine State the company’s permanent headquarters.

Ben Litowich & Son had no retail presence until 2008, when Ashley Litowich, a fourth-generation member of the family, suggested opening a juice bar. That idea grew into a store that would serve multiple needs for health-conscious consumers in southeast Florida. In 2009, 4th Generation Organic Market & Café set up shop in east Boca Raton.

“We’re not just another fresh market,” says Richard Lewis, who has been the store’s general manager since it opened. “We’re really out there every day trying to educate consumers and promote organics and a healthy lifestyle.”

4th Gen offers groceries, produce, meat and seafood, supplements and other wellness products, prepared foods, and a catering service. The deli serves up sandwiches, veggie burgers, salads, pâtés and raw nut-based cheeses. A hot case has dishes such as lasagna, jambalaya and meatballs. The dessert bar is famous for its brownies, raw vegan ice cream and cashew-based cheesecakes. A juice and smoothie bar serves fresh-made beverages.

The produce department accounts for 16 to 20 percent of the store’s total sales. The number is increasing, says Lewis, and he intends to keep it that way. “If that department starts to shrink, I’m in trouble,” he says.

Lewis and the store’s produce manager work together on purchasing. “We work with a lot of local organic farmers, as well as several farms in California,” he says. “In South Florida there’s no consistency in organic produce, so we have to rely on California growers to get organic produce year-round. Unfortunately, that’s the nature of the business we’re in. If we can’t get the product organically, we just can’t get it.”

The team sources specialty items as they’re available. A local farmer is growing jackfruit, and 4th Gen put several of his fruit in the store. The farmer visited to chat with customers about the best ways to use it, and the store gave out samples and did demos. The staff also ran a contest and encouraged customers to guess the weight of a single jackfruit (which was 7.5 pounds).

Besides standard and specialty items, the produce department has machines for making fresh nut butters, and a spiralizer for creating noodles from beets, squash, carrots and other vegetables. In addition, the store focuses on ready-to-cook items like soup mixes and kabobs.

Produce items are displayed primarily on air-flow racks, Euro and other types of tables, and refrigerator tables that can be turned on or off depending on what’s sitting on them. 4th Gen’s staff sometimes uses shippers or produce boxes from suppliers to build displays.

“We’re very creative with merchandising,” says Lewis, noting that the freedom to use his imagination is one of his favorite things about the job. “We try to work with the seasons.” In the fall, the team created attractive displays with pumpkins and hay bales to advertise seasonal items.

“People always think organic is expensive, but we try to be very price conservative.”

The wide variety of departments in the store also gives Lewis plenty of opportunities for cross merchandising. He often puts fresh berries near the smoothie bar to remind shoppers they can blend up drinks at home, or sets bananas in the cereal aisle.

4th Gen is Boca Raton’s only all-organic gourmet food store. Besides feeding consumers’ interest in organic, the store caters to a variety of trending values and dietary choices. “We can basically call ourselves a GMO-free store,” says Lewis. 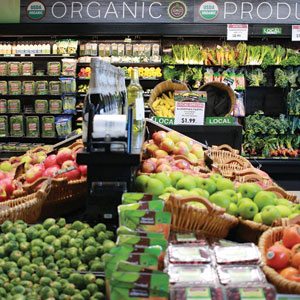 The catering and deli businesses cater to vegetarians, vegans and people who follow the raw diet. There are ample gluten-free items throughout the store. The store also places a strong emphasis on healthy food and cooking to draw in consumers interested in living healthier lifestyles. To do this, it hosts regular sampling events, educational seminars, and cooking classes and demonstrations. Customers can try samples of new foods (like hummus with kale) nearly every day. Speakers address topics such as using organic food and acupuncture to fight inflammation in the body, and how diet can be a factor in warding off chronic conditions.

4th Gen’s team of chefs does regular cooking demonstrations, often focused on vegan and/or raw cooking. Lewis says the store is in the process of updating its website, and one of the things they’re planning to add is more recipes. An improved social media presence will also allow 4th Gen to distribute recipes and cooking tips to shoppers.

Although everything in the store is organic, Lewis says they still clearly label items with a combination of professionally printed and handmade signs to remind customers that what they’re buying is free of pesticides, GMOs and other things they may be trying to avoid.

One thing that is very important to 4th Gen is keeping prices low. “People always think organic is expensive, but we try to be very price-conservative,” says Lewis.

Food safety and customer service are also top priorities. Given that Ben Litowich & Son has been in the food business for more than 100 years, it has long-standing quality control procedures that follow industry best practices.

Lewis brings more than 30 years in the natural food industry to the company, and he seeks out staff members who have worked in the industry for a long time. “They come from some very well-established companies, so they’re very experienced,” says Lewis. “They are very well-versed in food safety. They’re also educated about the products they sell, which means they can do a great job of answering questions and provide a high level of customer service.”

Giving back to the community is also part of 4th Gen’s mission. The company regularly donates oranges, bananas and other healthy items to charity walks and runs. An animal rescue organization recently hosted an adoption event at one of the stores.

All of this is creating a winning formula. In 2015, 4th Generation Market opened a 12,000-square-foot outlet in the west part of Boca Raton. With more space, Lewis and his staff can carry a wider selection of foods, offer more chances to educate and interact with consumers, and enjoy more opportunities to get creative with merchandising.