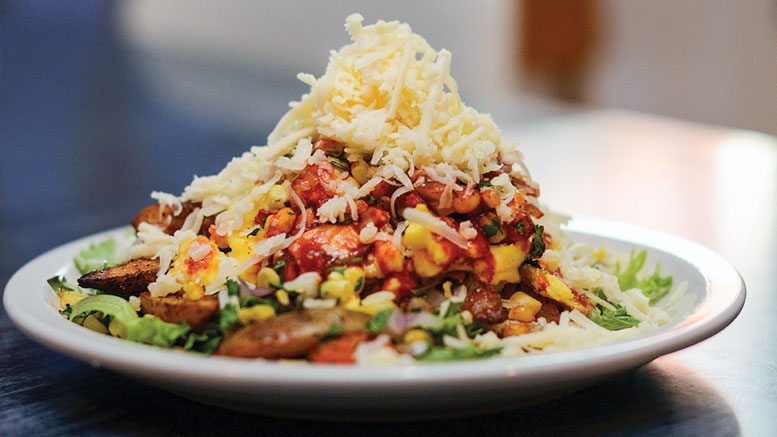 How one restaurant grew from neighborhood support. 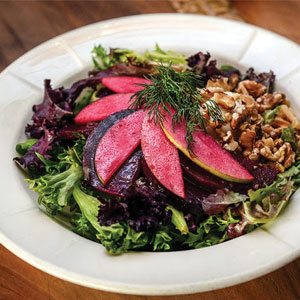 Melt Eclectic Cafe has been delighting its loyal customer base for more than 10 years. Originally opened by Lisa Kagen in 2005, the cafe, along with its sister location Picnic & Pantry, was purchased by the local Wellmanns Brands company in 2016. Wellmanns is known in Cincinnati for its many fine drinking establishments, but Melt is the company’s first foray into restaurants. Seating is available at tables and counters line the walls adorned with works of local artists. The cafe gets bustling for dinner, lunch and Sunday brunch. Melt’s tasty vegan-friendly menu is also budget friendly, which may be another reason it is so well-supported in Cincinnati’s Northside neighborhood.

“The growth of Melt began with neighborhood support and has blossomed from there,” explains Kagen, who serves as Melt’s executive chef. In addition to a reasonably priced menu and great soups, sandwiches and salads, it is Melt’s commitment to using the freshest products from as many local purveyors as possible that has endeared them to their customers. 5“We have always ordered our coffee from a local roaster, our breads from two local bakers, and we initially sourced the majority of our produce from local farmers during the best seasons,” says Kagen.

While using local growers worked well for the restaurant in its early years, a marked increase in business means they had to develop relationships with local wholesalers as well. “As volume has significantly increased, we are now ordering through major distributors such as Pic’s Produce and Lasita (Joe Lasita & Sons),” says Kagen. “Our volume is so high now that it can only be supplemented with local produce, which we like to use in our revolving menu at our downtown store, the bar menus, and through catering orders.” Kagen is referring to Bottle & Basket by Melt, which is the rebranded Picnic & Pantry.

Bottle & Basket, located in Cincinnati’s Over-the-Rhine neighborhood, offers catering, take-out sandwiches and salads. The acquisition of a liquor license made it possible to offer a variety of craft beer and wine as well. ‘Bites by Melt’ items are also featured on the bar menu at Myrtle’s Punch House and a satellite Melt location can be found at the beer garden at Famous Neons Unplugged, which are both at Wellmann’s establishments.

Melt’s philosophy when it comes to using whole, unprocessed ingredients and produce is to source fresh regardless of which distributor they use. “The majority of our prep utilizes fresh produce,” says Kagen. “In addition, we do not allow food dyes, trans fats, high fructose corn syrups and preservatives in any of our recipes.” Melt’s menu offers a choice of melted sandwiches, wraps, soups and salads, which have earned the cafe recognition as Best In Cincinnati from CityBeat readers for four consecutive years. To please its vegetarian and vegan customers, Melt uses a variety of plant-based proteins. The kitchen makes seitan and marinates and bakes the tempeh served in the veggie dishes. The restaurant also makes Rinotta (vegan cheese) from a mix of cashews and tofu with garlic, as well as blended herbs and spices.

With special events, catering or a featured special, Kagen always make a point to focus on local sourcing. When a locally grown item is featured on the menu, Melt makes sure customers know about it. We always highlight the locally grown ingredients when describing the specific menu item.” Some of these local purveyors include Sallie, Carriage House Farms, and Our Harvest Cooperative. Kagen trusts these local growers to deliver great products.

“We do not personally go to the facility to examine the produce. We place trust in our relationship with the farms and local suppliers. We have always been very happy with the quality of the ingredients.” Melt goes through more than 80 cases of produce in an average week and uses many of the same growers that can be found at farmers markets around the city. “The farmers markets in Cincinnati feature the same suppliers who come to us or — Findlay Market, specifically — and are just vendors buying from the same major suppliers as our distributors.”

Melt’s commitment to sourcing fresh ingredients, including produce, and a desire to offer clean, healthy menu items has helped to ensure its continued success in Cincinnati.

Tuscan Son: Tradition With A Twist