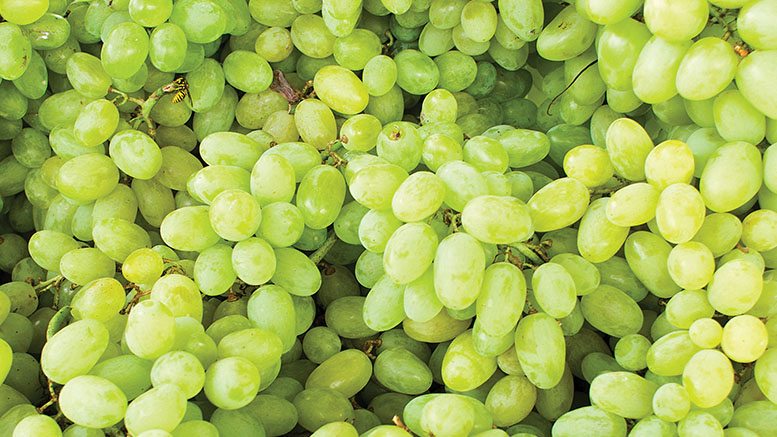 Consumers have become accustomed to table grapes as a year-round treat. The California harvest is followed seamlessly by the counter-seasonal fruit from Chile, Peru or South Africa, and then by harvest from vineyards in Mexico until the great Central Valley begins the cycle anew.

Summer is still the season when consumers most look for a wide variety of table grapes, most of them from the Central Valley.

“The peak of season for grapes is in late August and early September,” says Maria Brous, director of media and community relations at Publix in Lakeland, FL. “During that time period, we offer 12 to 17 different varieties.”

But spring grapes, some from south of the border, allow for variety in the category year-round.

“We receive grapes from Mexico about one month prior to the grapes from California, so it is not a significant difference,” says Brous. “We are always looking at flavor profile in order to offer the best, sweetest grapes to our customers. During the springtime, we offer several varieties of grapes to include: red, white, black, Cotton Candy, Midnight Beauty, Sweet Celebration and Jack’s Salute.”

‭‬Spring volumes coming from Mexico and the Southern California desert are less than the winter or summer crops from Chile and the San Joaquin Valley, respectively, but there is still plenty of fruit to make a statement in Produce.

Spring production is abundant enough to overlap with product from Chile in the winter, as well as California in the late spring.

“The Mexican season starts in mid or late April,” says Steve Yubeta, vice president of sales and marketing at Farmers’ Best International in Rio Rico, AZ. “We begin in early May, and the season will go all the way through June. In the early season, there is a significant overlap with Chile. California is going the whole time we are, but it’s Coachella, not the San Joaquin Valley.”

Regardless of the season, table grapes move best when they are promoted aggressively and often.

“For best grape sales results, research shows the greatest volume lifts will happen when grapes are promoted every week, promoted on the [retailer’s] front page, and when multiple grape items are promoted at the same time,” says Jeff Cardinale, vice president of communications at the California Table Grape Commission in Fresno.

After shipments from Chile wind down, various growing regions in Mexico and the Coachella Valley supply the nation with table grapes until the harvest from the San Joaquin Valley begins in the late spring and early summer.

“It all has to do with how the weather behaves on both the Coachella Valley and Mexico, but in general, in the past few years Mexico has started earlier than Coachella, especially because in Coachella they are not producing Perlettes or similar early green grape varieties,” says Suarez. “But even on the Flames, Mexico has been ahead of Coachella five to seven days in the past few years. But anything can happen, and this is definitely not a rule.”

The longer season in Mexico can produce as much as six times the volume of the Coachella Valley harvest. “Mexico starts before and ends after the California desert,” says John Pandol, director of special projects at Pandol Bros. in Delano, CA. “Mexico ships four to five times as many grapes as the California desert. At May 31, 2017, Mexico had crossed 9 million cartons and Coachella about 1.5 million.”

Most Mexican table grape production is concentrated in a handful of varieties that have proven adaptable.

“Flame dominates with close to half the volume, followed by Sugraone at about 15 percent,” says Pandol. “There are still more than a million Perlettes. Summer Royal and other blacks are a mixed bag, with some plantings being removed and others going in. There are more than a million cartons of black grapes. Red Globes are down to less than one million. The so-called ‘new varieties’ are in low numbers and in few hands.”

Most shippers report red grapes predominate in the spring.

“In our program, the majority are red grapes,” says Yubeta. “We’ve been using Perlette, Sugraone, and Red Flame, but people are growing many varieties.”

In addition to the predominant red varieties, there are also green and black table grapes that have proven amenable to spring production in Mexico and the Coachella Valley.

Although all three colors are readily produced in Mexico, few specialty grapes do well below the border, say importers.

“The proprietary breeders have done a poor job of dealing with this market, although it is improving,” says Pandol. “Dominant are Israeli whites under three or four names, a Spanish line of both reds and whites and selections from at least three California breeders. Some varieties have worked out well in Mexico and others are being abandoned, so it’s hard to know what’s increasing and decreasing.”

Some change in varieties could be on the horizon if breeders decide the Mexican production area warrants more attention.

What has not changed is the standard packaging for grapes, according to California Table Grape Commission statistics, as more than 80 percent of the Golden State’s U.S. shipments are in bags and 15 percent in clamshells.

Some Changes Are Coming

There are some new things under the springtime sun, including major shippers sourcing a variety of organic grapes year-round.

Shippers who invested in organic grapes out of Mexico have been rewarded with increasing sales.

“We started our organic program in Hermosillo last year, and that volume will double this year,” says Earl McMenamin, California and Mexican grape manager at Pacific Trellis Fruit in Los Angeles. “We’re excited with the growth of our new organics from Hermosillo. We have green, red, and black organic grapes, and I don’t think many people have all three colors.”

There are also other efforts to tailor the supply coming out of Mexico to suit consumer preferences.

“Currently, there is a global shift to newer varieties of seedless grapes of all colors; Mexico is no exception,” says Tom “TW” Wilson, grape sales manager at Giumarra Companies in Los Angeles.“We are working to stay at the forefront of this shift by working with our breeding partner to develop new varieties that deliver consumers a fantastic eating experience. We also grow and market other new and conventional varieties.”

Giumarra already ships an unusual variety of table grapes through the spring season.

“For Mexico, our varieties include Early Sweet, which is a new, very early green seedless variety and a strong competitor to Perlette,” says Wilson. “For many years, Perlette has been the early green variety produced in the spring. ARRA Passion Fire is a new, proprietary red seedless grape that is a strong competitor to traditional Flame seedless. ARRA Sugar Drop is a mid-to-late season, exceptionally sweet green seedless grape. It’s one of our newest varieties coming to market. Summer Royal black seedless is an early producer, along with our Nature’s Partner Mystic Pearl brand premium black seedless grapes. We also offer conventional varieties Flame and Sugraone.”

Although the window following Chile is overwhelmingly supplied out of Mexico and the Coachella Valley, South African growers also are putting their toes in the water.

“South Africa is only testing the U.S. market on grapes currently with very low volumes being shipped,” says Ron Van Heerden, director of South Africa procurement for Capespan North America, St. Laurent, Canada. “It should not have an effect on the market.”

The later stages of the South African grape harvest would reach a window relatively early in the spring.

“For the 2017 season, the last fruit arrived towards the end of March,” says Van Heerden. “We are able to have fruit arrive through April if we ship until the end of the production season. For U.S. sales, South African volume would peak from January through March and then start to decline until the end of April. The prevalent variety at source for this marketing window is Crimson Seedless, but it is not being shipped to the United States. We are of the opinion the new seedless propriety varieties might work better in this marketing window and will continue to look for opportunities to grow the demand.”

The emergence of South Africa as a major player, should it happen, would add to the geographic diversity of spring grapes.

“For the North American market, Mexico and California are the main suppliers during the spring season, May and June,” says Wilson. “There are typically some grapes from Chile in the market in May, as well. June is almost entirely supplied by Mexico and California. Last season, Mexico produced a little more than 21 million cartons of table grapes, according to the U.S. Department of Agriculture Market News. Mexico has several areas of production that allow it to start ahead of California in the spring.”

There is already greater diversity in sourcing grapes for the important winter window after the California harvest is finished.

“In the winter, there are many countries exporting to the United States: Brazil, Peru, Chile and South Africa, to name a few,” says Giumarra’s Wilson. “The winter season starts late October and extends into May. Chile generally ships around 50 million cartons, plus or minus a few million depending on the season, to the United States. Peru’s volume to North America has been rising every year. Recently, Chile’s volume has also started to increase.”