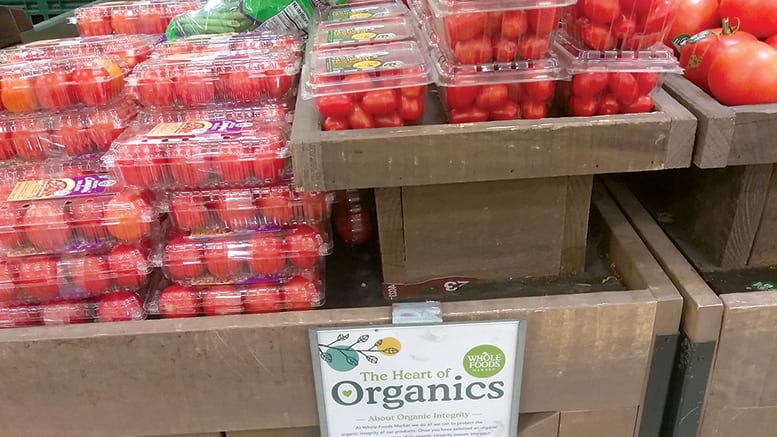 Merchandising organic tomatoes is a matter of taste, but either way, they will sell. 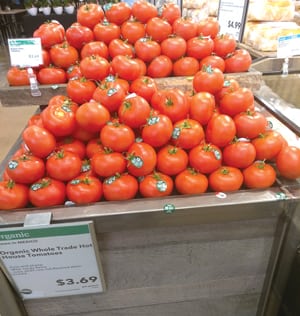 Tomatoes drive the vegetable category in both tonnage and dollar contribution, and organic tomatoes have grown by leaps and bounds, says Harold Paivarinta, senior director and head of sales for North America for Red Sun Farms, Leamington, Ontario.

Paivarinta says organic tomatoes have grown year-over-year for the past five years.

“While technological advancements and growing practices have driven efficiency, that gap between conventional and organic has narrowed, but organic production will always be costlier,” he says. “Organic produce, including organic tomatoes, is more expensive to grow — that’s the bottom line.”

David Ferman, marketing director for San Antonio-based Brighthouse Organics, a NatureSweet Ltd. company, says as it is with the vast majority of produce items, the demand curve for organics slopes downward; the higher the price, the less is purchased.

“Organic produce sales are currently on the rise,” he says. “What is more important than comparing conventional versus organic is to look at the incrementality of organics and to realize that the organic shopper will go to another store to buy product if what they are looking for isn’t available.”

Pricing of organic tomatoes can vary depending on availability, seasonality, location and demand, says Chris Veillon, chief marketing officer for Pure Hothouse Foods Inc., Leamington, Ontario. “You may see pricing as much as double, or sometimes more, depending on the time of year,” he says.

Frank Romero, vice president of produce and floral for The Kroger Co., Cincinnati, says offering high-quality organic tomatoes at a fair retail price compared to their conventional counterparts is a recipe for success. “The spread between organic and conventional should be considered when determining a pricing strategy,” he says. “The retail ceiling would be driven by the market.”

Vince Mastromauro, produce director for Sunset Foods, Highland Park, IL, says pricing organic tomatoes at what can be viewed as a value to customers and having them on-ad weekly works best to sell product. “I have a retail set that I never surpass so that I show value day in and day out,” he says. 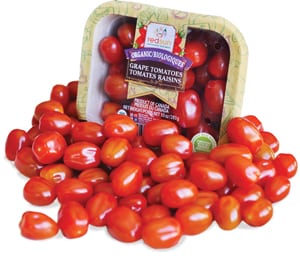 Although organic produce continues to grow at a double-digit pace, it’s not yet commoditized, so merchandising space is less prominent when comparing organics versus conventionally grown items, says Paivarinta. “However, we see more retailers freeing up additional linear feet or expanding their departments in response to consumers’ increasing demand for organic SKUs,” he says.

There are two schools of thought on organic produce: integrated versus segregated merchandising strategies. Both are experiencing growth, so both are valid, notes Red Sun Farms’ Paivarinta.

“The tomato shoppers are becoming connoisseurs in many respects; they are hunting for the right tomato depending on its usage.”

Segregated merchandising on a larger scale shows customers you are committed to organics and are constantly expanding offerings in a dedicated space within the produce department, he says. “The only downside is that if you shop organics infrequently or aren’t a committed consumer, you just bypass the dedicated space,” adds Paivarinta.

“We’ve seen the best results converting consumers to purchase organics with a higher frequency is through fully integrated merchandising strategies.”

By merchandising organics directly adjacent to conventional offerings, shoppers can assess both options “head to head” and make their choice.

“We have experienced a faster shift, and organic category growth occurs faster with many retailers who’ve embraced the integrated-merchandising strategy, especially now that the price, quality and offerings of organic produce has improved over the past five years,” says Paivarinta.

There are several important variables that need to be considered when it comes to retailer merchandising sets, says Ferman of Brighthouse Organics.

“Small tomato usage also continues to increase as consumers focus more on salads and other healthy, on-the-go products,” he says. “We provide consumers with variety to meet the needs of different usage occasions all year long and recommend at least 50 percent of the category be within the small tomatoes category.”

Unlike Paivarinta, Ferman is in the camp that recommends a segregated organics section.

“Brighthouse Organics recommends merchandising all organic items together in the same area of the produce department, as the organic shopper is looking to buy organic across their basket,” he says.

“Creating a destination where the shopper can find everything they need reduces the time to search and compare and, ultimately, makes for an enjoyable experience with a greater likelihood they leave the store with everything they want.”

Procacci Bros. Sales Corp.’s Feighery says choosing between a segregated or integrated organic section depends on the retailer and their pricing.

“With integrated sets, we’ve seen good pulls on organics if the pricing structure is similar to conventional,” he says. “It depends on the flow of product and types of customers shopping the store. If you’ve got customers buying only organic, it’s easier for them to shop a segregated display.”

“Similar to conventional, a blend of bulk and packaged merchandising is ideal,” he says. “Packaged options within tomatoes provide a natural barrier between conventional and organic, which makes them ideal candidates to merchandise together.”

Mastromauro at Sunset Foods says he dedicates 8 feet for conventional tomatoes in his stores and 4 feet for organics.

“We merchandise organic tomatoes much the same way we do conventional, with tie-in items such as lemons, limes and avocados,” he says. “We have them merchandised next to each other but on separate Euro tables.”

The organic category of 2018 is not the niche organic movement of 1990, Ferman of Brighthouse Organics says.

“It crosses all geographic, gender and ethnic segments, and the shopper expects to find organics wherever they shop,” he says. “Instead of limiting the awareness, it’s important that retailers amplify the in-store communication to help their organic shoppers find them and make the shopping trip more convenient.”

Over the past decade, organic availability has moved from highly seasonal to the mainstream, Ferman says, with demand rising and supply increasing to match it. 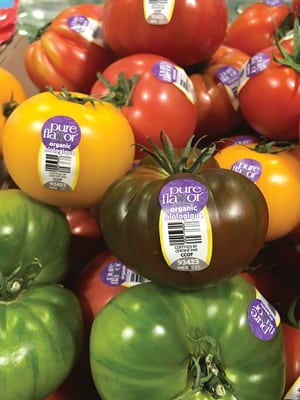 “The organic shopper now looks to increase the percentage of organic in their basket, from fresh produce, meats and dairy to center-store items,” he says. “For this shopper, it is a way of life tied to clean eating and living, not just a product.”

Paivarinta of Red Sun Farms says organics appeal to everyone. “From seniors who are wanting to improve their diets, mothers who wish to increase organic consumption within their family units, to young adults who’ve been more exposed to organic options since childhood and who wish to continue buying organic products wherever possible,” he says.

“However, when organic items are featured in ads or at special prices, you broaden your appeal to the occasional or fringe organic consumers as well,” he says. “Hopefully, you are able to win them over with your organic offering and secure another loyal customer.”

Veillon at Pure Hothouse Foods says organics consumers are savvy consumers who spend time researching the products they buy — searching for information about the grower and what the growing practices are, for example.

“The tomato shoppers are becoming connoisseurs in many respects; they are hunting for the right tomato depending on its usage,” he says. “There are still many who will buy the same tomato week in, week out for all their uses: salads, soups, sauces, snacking, etc., which may not be the most efficient or best flavor decisions.”

When it comes to promoting organic tomatoes in produce departments, Harold Paivarinta, senior director and head of sales for North America for Red Sun Farms, Leamington, Ontario, says every organic grower has a story, and there is a lot of material available to both the retailer and the consumer to share this narrative.

“We think retailers have embraced their organic suppliers and are doing a great job with in-store callouts, printed materials and digital campaigns to tell their organic stories,” he says.

Ferman says Brighthouse Organics offers recipes on in-store signage in circulars, tear pads and displays to help provide organic tomato shoppers with meal solutions, and this helps retailers by creating awareness of their organic offerings. “If shopper card data is available, targeting recipes toward purchasers of other organic items is a great way to increase conversion on your full organic portfolio,” he adds.

Rick Feighery, vice president of sales for Procacci Bros. Sales Corp. in Philadelphia, says putting organic tomatoes on-ad will lead to increased sales, and stores will see repeat business for several weeks after the ad runs. “We recommend pushing grape tomatoes on-ad every other week during the summer,” he says.

Chris Veillon, marketing director for Pure Hothouse Foods Inc. in Leamington says organic tomatoes should be featured on a regular basis, rotating different items as features to stimulate more interest in the category. “BOGO opportunities can help with quick sales or with themed event or holiday sales opportunities,” he adds.

Vince Mastromauro, produce director for Sunset Foods, Highland Park, IL, says he puts organic tomatoes on-ad alternating weeks with a fresh, bulk conventional tomato and an organic grape tomato in the same ad, which can double sales for both.

As for cross-promotions, Veillon recommends mixing complementary items together such as cucumbers and peppers.

Feighery suggests pairing them with bagged or clamshell salads, or with a variety of salad dressings. “I’ve seen organic, ugly-ripe tomatoes cross-promoted with bacon and lettuce for BLTs, or with basil and Mozzarella cheese,” he says.

Veillon says many stores now have ready-to-eat or prepared food where organic tomatoes can be featured. “Some even go as far as hosting cooking sessions or product demo sessions on a regular basis,” he says. “Handing out recipe cards or product info sheets are always a good way to help inform and educate the consumer about product benefits.”

“You need a steady message delivered from everyone in the retail segment — buyers, specialists and associates at store level,” he says. “They need to understand how organics are grown and what the USDA logo means. The frontline is the produce manager in stores — keep them educated. They are the first line of defense and are helpful to the whole industry.”