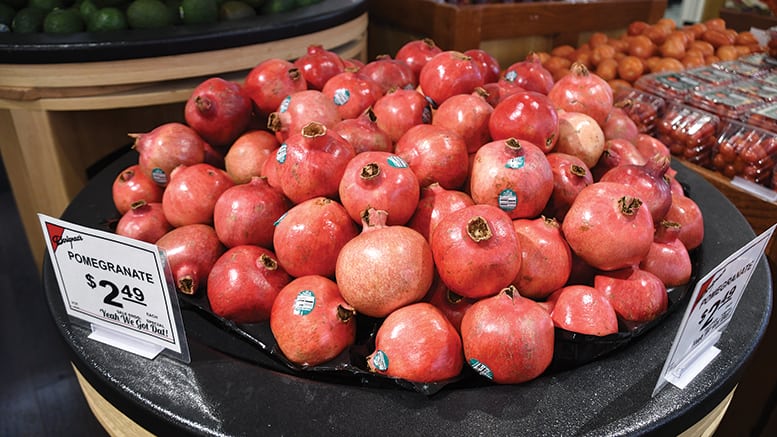 The pomegranate, remarkable for its ruby-red outer husk and jewel-like arils inside, has held a place at the table since before recorded history.

This unique fruit figured prominently in Greek and Roman mythology, drew royal favor from kings and queens and was even cultivated by an American founding father. Over the past decade, there’s been a resurgence of interest because of the pomegranate’s rich nutrient content and reputation as a superfruit.

“The pomegranate is still relatively unknown,” says Jeff Simonian, president of the Simonian Fruit Company, in Fowler, CA. “Less than 20 percent of Americans have tried this fruit, so there is plenty of room to grow. Fueling this growth in recent years is counter-seasonal availability, organically grown fruit and value-added arils.”

Here are six ways to pump up sales of the pomegranate category.

Years ago, pomegranates were primarily purchased by shoppers of Middle-Eastern, Southeast Asian, and tropical African heritage, regions where this fruit is native and has been cultivated for centuries. Today, this demographic has expanded to the health-conscious, foodies and the culinary adventurous, and the influential Millennial demographic.

“Pomegranates are sweet, juicy, have beautiful coloring and add that extra bit of color to any dish or glass of champagne,” says Stefanie Katzman, fourth-generation member and manager at S. Katzman Produce, Inc., in Bronx, NY, which sells packaged pomegranate under its Bloom Fresh label. “They can be enjoyed on their own as a healthy and delicious snack or added to almost any recipe.”

Indeed, pomegranate consumers span coast-to-coast, according to Tom Tjerandsen, manager of the Sonoma, CA-based Pomegranate Council. “Sales are concentrated in the Northeast and West, followed by the South and Midwest. Retailers particularly like pomegranates because they are low-shrink, there’s no trim required and they’re a high impulse purchase with a good ring.”

The chief selling point for domestic pomegranates lies within its seasonal appeal, says Ray England, vice president of marketing for the DJ Forry Co., headquartered in Pismo Beach, CA. “Pomegranates come into volume at a time of year when retail produce operations are looking to bridge the gap between summer sales and the holiday push.”

The domestic pomegranate season starts in mid-August and runs through the end of December or early January, according to information provided by the Pomegranate Council. Early-season varieties are lighter in volume, the fruit size is smaller and husk color less vivid than when heavier volumes of the larger, more vibrant-colored Wonderful variety start harvest in early to mid-October. California is the primary U.S. production state, with a small number of pomegranates grown in Nevada, Utah, Arizona and Georgia. Production out of California has decreased to approximately six million boxes over the past two years because of rain during harvest that leads to cracked fruit unsuitable for fresh market sales. This weather-related issue has led some growers to convert pomegranate acreage to almonds and walnuts.

“The key to moving the needle on pomegranate consumption is the nearly year-round availability we now have,” says Levon Ganajian, director of retail relations for Trinity Fruit Sales, headquartered in Fresno, CA. “This availability means we can work toward getting consumers to start putting pomegranates on their shopping list.”

Offsetting the mid-August through January domestic season, Chile exports its pomegranates to the United States from May through July. At S. Katzman Produce, arils are imported from India and available year-round.

Increasing value-added SKUs, such as pomegranate arils and organically grown fruit to the mix, can boost category sales.

“Arils are a quick and convenient healthy topping for yogurt, ice cream or a fruit bowl,” says Robby Cruz, vice president of fresh retail at Cub Foods, a 77-store chain based in Stillwater, MN, and a subsidiary of Eden Prairie, MN-headquartered SuperValu Inc. “It’s possible in the future that a majority of pomegranate sales will come from arils.”

Sales of value-added fruit such as pomegranate arils grew last year despite the category as a whole posting a decline in annual sales for the first time, according to based on FreshFacts on Retail, 2017 Year In Review, published by the Washington, DC-headquartered United Fresh Produce Association.

“The chief challenges in getting consumers to buy this product are price and shelf life,” says Katzman, whose company sources high-flavor arils year-round and packs these in 4.4-ounce and 2.1-ounce cups, both with spoons included under the lid for greater ease of use. “That’s why we’ve been able to overcome these challenges and continue to see growth. For example, we fly the product in several times a week to maintain peak freshness and flavor. Product arrives to us in New York with approximately 12 days shelf life, and then we expedite distribution to our customers who then get it out to the consumer.”

There is some experimentation underway with the use of high-pressure processing (HPP) to extend the shelf life of pomegranate arils to 60 to 70 days, according to the Pomegranate Council’s Tjerandsen.

Trinity Fruit Sales offers both conventional and organically grown pomegranate arils in a variety of pack sizes and styles. The company, as well as others in California, also grows and markets organic whole fruit.

When in season, Bristol Farms goes big when it comes to fresh pomegranates and arils, says John Savidan, produce director of the 12-store chain headquartered in Carson, CA. “We build large displays of the whole fruit and promote heavily when in season. Many times, these are built on satellite displays or even in large bins. Nothing calls out fall better than fresh, whole, burgundy-colored pomegranates merchandised as you enter the departments.

“Arils are most often merchandised with our fresh-cut fruit. It’s a natural and, healthy fit, not to mention the red-colored fruit really makes for a nice pop,” says Savidan.

Displays that merchandise both ambient temperature and refrigerated product adjacent to each other is something Cruz at Cub Foods often does. “For example, merchandising pomegranates and arils next to refrigerated berry and grape sets can help drive traffic and land impulse purchases,” he says.

Selling pomegranate arils in the berry set is particularly effective, according to Adam Cooper, vice president of marketing for the Los Angeles-based Wonderful Company, the largest U.S. grower of fresh pomegranates, arils and juice. “Velocity of aril sales increases four times when positioned next to berries compared to other parts of the store.”

Whole fruit makes a great color break in the tropical set, next to fall greens or beside other fall fruits.

Two of the biggest challenges in getting customers to buy and try pomegranates is how to use them and how to eat them.

“We have an amazing advertising department that does all of our in-house communications and special signage. Every location has their own chalk artist that makes very colorful hand-drawn signs, all of which are very detailed. These types of vehicles are where we will communicate special messaging,” says Bristol Farm’s Savidan about getting information on pomegranates to his customer base.

To further the message, Cub Food’s Cruz says, “We utilize point-of-sale on display and digital efforts to help drive the health benefits, recipes and usability of pomegranates.”

Many industry experts also advise retailers to cross merchandise as a mode of offering suggestive usage ideas for pomegranates.

“Position display bins of whole fruit or packaged arils directly next to bagged salads in the produce department or yogurt in the dairy aisle,” suggests Wonderful’s Cooper.

“With a healthy and delicious fruit like a pomegranate that really does sell itself, we always recommend sampling,” says Katzman.

Price is one way to promote pomegranates.

“Large fruit in season might be promoted in multiples such as 2/$4 or 2/$5, while value-oriented stores may sell small fruit for 99-cents each,” says Trinity Fruit Sales’ Ganajian. “We’ve had a lot of interest by club retailers in promoting a single layer box with 6 to 8 pomegranates.”