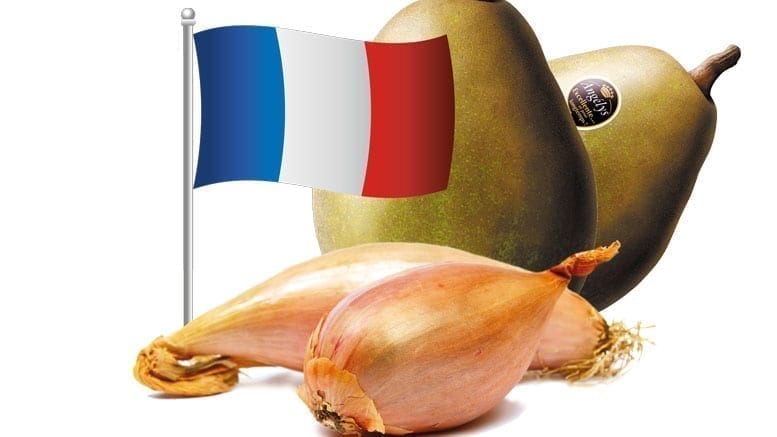 More inclusively, the association, which represents 80 different fruits and vegetables, wants to enliven U.S. and Canadian buyers’ knowledge of the profit potential tied to the distinctive qualities linked to product origins, and high-level production practices.

For the past five years, French exports of fresh fruits and vegetables have grown on average by 19% in volume and 18% in value in the United States, according to Interfel, but the industry confronts a tough, competitive international market, often commodity price-driven, behooving a strategy to differentiate its offer in taste, quality, authenticity and diversity to maximize market opportunities.

These objectives are part of a broader promotion program, Fresh Fruits & Vegetables, co-financed by the European Union to reach importers, distributors and key stakeholders to boost exports of European produce in various target markets.

The stated action strategy for North America is appropriately “based on a single key message: promoting the European Way of Life, particularly French in terms of gastronomy, pleasure, eating well and taste, plus refinement and elegance,” says Marion Kukulski, international project manager at Interfel, and Produce Business host during a four-day, whirlwind excursion from Paris to Angers to Morlaix to explore traditional growing/production regions and U.S. export operations.

Of course, to fully appreciate the distinct flavor profiles and product characteristics, we were treated to a personal culinary workshop/tasting with Interfel Chef Charles Soussin, and welcomed by Daniel Soares, international marketing manager at the Paris headquarters.

Traversing pear and shallot farms and packing stations in the seasonal windy rains, we engaged with zealous producers and exporters, who graciously shared their expertise as they meticulously readied January shipments to the United States, resourcefully outwitting persistent union strikes to ensure timely arrivals.

These were the first U.S. shipments of premium winter variety Angelys pears, available for consumption through June. Native to France, the country is the largest producer of Angelys pears, producing more than 2,800 tons each year, yet U.S. exports in January and February 2019 were just a small fraction of that total, at 140 tons, according to Interfel.

The goal is to counterbalance those obstacles by promoting the premium characteristics of the French variety, primarily grown in the Loire Valley and North of France, where it reaches its peak ripeness. Tessier notes that a collaborative rebranding of French Angelys pears to Angys pears, a registered trademark, is underway for next season to further differentiate from competitors.

A visit to Prince de Bretagne, one of France’s largest vegetable producers, and a familiar brand to U.S. suppliers, involved an enlightening presentation on authentic French shallot production, and the importance of distinguishing them from ubiquitous imposters. The native perennial bulbous gems are hand-planted and harvested in France’s traditional shallot production areas of Brittany and the Loire Valley, with ideally suited climate conditions.

France produces 49,500 tons of shallots a year. In 2018, the country exported more than 2,200 tons of shallots to the United States and 264 tons to Canada. The French shallot is registered under the Protected Geographical Indication (PGI), which covers agricultural products closely linked to their geographical area.

To that end, while the Interfel communication campaign is initially aimed at the trade, according to Kukulski, the ultimate goal is realizing a retail/consumer promotional/merchandising element to fully capitalize on the French buying cachet that Americans are known to fancy.