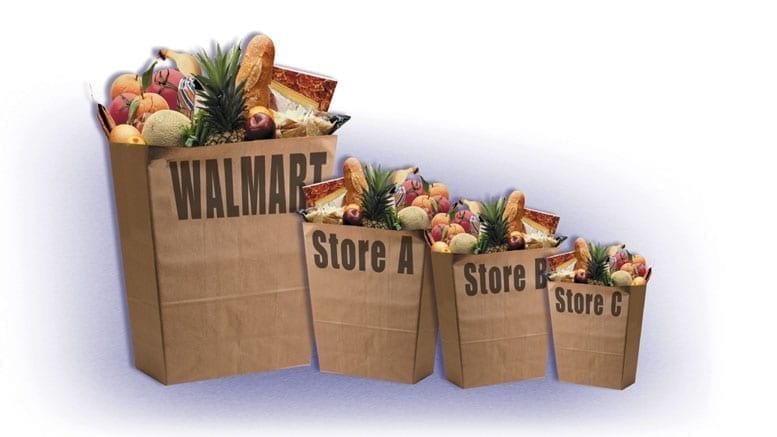 With a rapidly growing population, consumers looking for low-priced produce will find it at only two of these seven stores studied.

Editor’s Note: We asked veteran retailer and Produce Business columnist Don Harris to visit each store to give his observations and opinions. Please see “Don’s Notes” in the boxes that follows.

This is the 32nd edition of the Produce Business Walmart Pricing Report. It was completed just before pandemonium struck the retail food system as a result of the coronavirus outbreak.

A widespread shut down of restaurants and a fear of future closures at retail has led to massive increases in retail sales. Confidentially, retailers have shared sales increases of 250%, 350% and more.

A part of that increase has been a boom in delivery. Walmart has been building its delivery mechanism for years. But, of course, Amazon.com is a competitor, and most grocery stores have some kind of online outlet.

Walmart’s strength is its ability to leverage its real estate footprint by offering “click-and-collect” options. Amazon sells a lot of grocery items through its established online service, but less through its dedicated food portals, such as AmazonFresh or Prime Pantry.

The coronavirus has probably led people to want to buy online. First, it lets them avoid other people and thus possible contamination. Second, many stores are out of stock on various items. So many consumers can buy from multiple vendors to meet their needs. Third, many stores are not themselves anymore. HEB, Wegmans Food Markets, Publix Super Markets and many others have all announced reduced hours of operations and the closure of in-store restaurants.

In future editions of this study, we will look to ascertain the degree to which online sales have come to compete with their brick-and-mortar cousins.

For now, the assumption is that in the not-too-distant future, we will see a return to normalcy. In store cafes will open. People will want to get out.

It is also true that things sometimes change forever. If consumers who never bought on line try it, some will find they like it. It also may be a long time before people are comfortable bumping into some random consumer on a check-out line.

Still, core values — Price, Quality, Assortment, Convenience — are bound to be important, and for the supply base it makes little difference, at least in the short term, if a supermarket sells the product by promising delivery, offering pickup or by having customers walk in the door.

If consumers do walk in the door of the seven separate supermarkets we visited for this study, when it comes to price they see something interesting. They see that, for the most part, supermarkets are unwilling or unable to compete with Walmart on price.

The two big semi-national chains, Safeway and Albertsons, don’t even seem to be trying! Safeway’s produce prices come up as 30.46% over those at Walmart, and Albertsons was 29.92% over Walmart. It is hard to believe that Safeway and Albertson’s have just decided to abandon the idea of being price competitive with Walmart, but that seems to be true – at least in produce.

Yoke’s Fresh Market comes in at the very top of the price comparison – showing its produce prices to be a full 35.02% over those of Walmart. Yoke’s fame is that it is an employee-owned company with 17 stores. Online you can find lots of praise for their produce. One Yelp reviewer wrote this: “Yoke’s consistently has the best quality produce and has some items that you can’t find at other stores around town, and the employees are always friendly and helpful.”

Still, is it really possible that the market will sustain a price so high compared to Walmart? For the moment, it seems so.

Super 1 Foods seems to be neither here nor there. Its produce is not as expensive as most of the retailers but not near the bottom, ranking 22.92% over Walmart.

Kroger’s Fred Meyer division, a concept not unlike the Walmart Supercenter, comes across as a bit not here and a bit not there in its pricing. It is a full 11.42% over Walmart, so it is beating most supermarket chains in produce pricing, but it is still letting Walmart beat it.

The big news out of this month’s review is the triumph of WinCo Foods. It beat Walmart, coming in with produce pricing 2.53% lower than Walmart. The mostly employee-owned company is aggressively growing, and its low price positioning is its calling card.

Winco’s win in this category is partially reflected in a readjustment of the apple category to make sizes comparable.

Walmart is busy now, focusing on its online business. Maybe that will be enough. But losing its reputation as the low price leader won’t make its job easier.