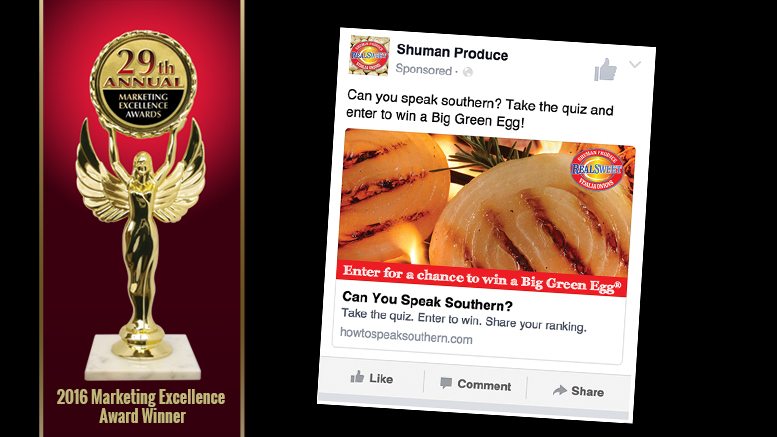 How to Speak Southern

Campaign: The How to Speak Southern promotion was built on more than just saying things a bit differently; it blended the uniqueness of southern culture with the unique sweet taste of Vidalia onions. The promotion provided consumers with the opportunity to test their knowledge of southernisms via a seven-question online quiz, titled “Can You Speak Southern?” Each result could then be shared socially across Facebook and Twitter, adding a viral sharing effect to the promotion. Below the quiz result, participants had an option to opted in to receive future communications from Shuman Produce. Those who signed up were entered to win weekly Real-Sweet Prize Packs, which included Real-Sweet Vidalia onions, a How to Speak Southern t-shirt, and other Shuman Produce merchandise. At the end of the campaign, one winner received the grand prize of a Big Green Egg grill.

A dedicated website was created to host the campaign elements. The website was also mobile responsive, which automatically sized the website to the viewing screen. There was a live social media feed that aggregated content related to Vidalia onions in real-time from Facebook, Twitter and Instagram. The company’s target markets, a significant social advertising campaign was developed to reach consumers with specific interests related to cooking, grilling, recipes and other healthy eating categories. Support materials used in the promotion included POP, ads, posters and TV commercials.

Results: The promotion exceeded the entry goal with a total of 26,419 entries, resulting in 30 percent more than the initial goal of 18,000 entries. New Facebook fans and Twitter followers were acquired. Of nearly 30,000 website visits, 85 percent were unique. Average entries per day: 330. Average quiz score: 80 percent. Unique website visitors: 25,575. Conversion Rate: 94 percent of those reached took the quiz, and 26.4 percent opted-in for the e-newsletters.