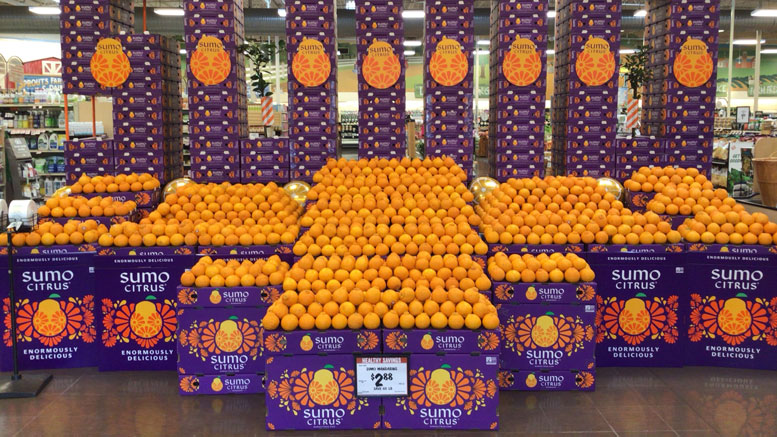 The wintertime favorite is poised for a successful season.

Citrus, known for its cold- and flu-fighting abilities, is a wintertime favorite in produce departments nationwide. The category, which represented 7% of total produce dollar sales for the 52 weeks ending Sept. 25, 2021, according to Nielsen Total U.S. data, as provided by New York, NY-headquartered Nielsen, benefited during the COVID 19 pandemic for its immunity-boosting perception.

“Clementines/mandarins probably lead the way because of ad activity and extra displays. The point of sale the industry is providing now enables massive displays, information and customer attraction,” Hendricks says. Regular navel oranges and Valencia oranges, which the stores retail individually or in 3-, 4-, and 5-pound bags, are next dollar-wise, then lemons, limes and grapefruit, when in season.

“We always pick up any other varieties such as pommelos, tangelos, tangerines, kumquats, etc., as they come around,” Hendricks adds. “We always use California citrus while in season because of the quality and sweetness of the varieties.”

Now, as citrus sales start to normalize and the domestic season begins, grower/shippers, marketers and retailers alike look for new ways to sell old favorites. This is especially true for California-grown fruit, which accounts for 60% of total U.S. citrus production, according to the U.S. Department of Agriculture’s National Agricultural Statistics Service (NASS) Citrus Fruits 2021 Summary.

1. CONTINUE TO CALL OUT THE VITAMIN C MESSAGE

Citrus was big two years ago when the pandemic hit, then sales dropped, says Jeff Fairchild, produce director at New Seasons Market, a 21-store chain headquartered in Portland, OR. “I think [sales] leveled out and that longer-term, consumers are more health-conscious and they see citrus as healthful.”

A desire to eat healthier is the No. 1 reason consumers purchase citrus, according to a recent shopper behavior survey by Sunkist Growers Inc., headquartered in Valencia, CA.

“We call Cara Caras ‘The Power Orange’ because it offers 100% of your daily vitamin C intake in just one orange. It’s also a good source of folate and fiber and offers potassium and vitamin A,” says Christina Ward, Sunkist’s senior director of global marketing. “Cara Caras are a lot of fun for so many more reasons, including the fact that it is pink on the inside, seedless and sweet.”

Again, this season, Wonderful Citrus will promote the nutritional and functional benefits of its Halos brand mandarins during the November through May California season. The Delano, CA-based company will do this through public relations communications with health-focused media publications as well as messages provided for registered dietitians to communicate.

“It’s important to continue to share Halos as the perfect vitamin C-packed snacks, especially during the winter months since it’s a time when consumers are particularly looking for vitamin C,” says Dave Rooke, Wonderful’s senior vice president of sales.

“Anything that has good flavor, is sweet, in a snack form, easy to peel and not messy, meaning you don’t have to wash your hands after you eat it, is a big win,” says New Seasons Market’s Fairchild, describing the sales success of small, seedless, ‘zipper’ skin citrus.

California acreage for mandarin and mandarin-type citrus including clementines and tangerines increased over 400% between 2002 and 2020, according to the 2010 and 2020 California Citrus Acreage Reports, published by the California Department of Food and Agriculture and California Agricultural Statistics Service, in Sacramento, CA.

Mandarins are the top-selling citrus, representing 37% of category sales during the 52-weeks ending Sept. 25, based on Nielsen data. “Mandarins continue to be the dominant powerhouse in the citrus category. Consumers are buying more mandarins, with volumes up both in 2020 and 2021,” says Kiah Ruvalcaba, director of marketing for Fresno, CA-headquartered Fowler Packing. In response, Fowler is adding new offerings to its Peelz citrus brand, including organic mandarins.

In October, the Giumarra Companies expanded its domestic citrus program with the addition of California-grown mandarins.

“We’re nearly tripling our domestic mandarin volume during a key timeframe when citrus is in high demand and health and wellness are still top of mind for consumers,” said Alex Marriott, in a news release. Marriott is the domestic category citrus lead for the Los Angeles, CA-headquartered Giumarra Companies. The mandarins will be packed under Giumarra’s Bright Bites brand.

Following mandarins, oranges contributed 23% of citrus category dollar sales during the 52-weeks ending Sept. 26, based on Nielsen data, followed by lemons (17%), limes (15%), grapefruit (6%), and tangelos and tangerines, each at 1%.

Fresh citrus is in demand year-round, has become a household staple for many families and continues to attract new shoppers due to its versatility, says Monique Bienvenue, director of communications for Bee Sweet Citrus, in Fowler, CA.

“Last year, our team strategically redesigned the packaging of all the varieties under the Bee Sweet Citrus label to highlight the diversity of our entire citrus line — we sell 15 different varieties of citrus,” says Bienvenue. “Our new domestic campaign, ‘Sweet on Citrus,’ highlights that concept, and runs in conjunction with California’s citrus season.”

The shift from bulk to bagged citrus during the pandemic has not slowed, says Fowler’s Ruvalcaba. “While 3-pound bagged SKUs remain dominant, the 5-pound bagged SKU had a 25% sales dollar growth year over year.”

One type of specialty citrus poised to make a splash in the category is the Dekopon, a large variety of Japanese mandarin.

Over the past five years, lemon growth is second only to mandarins, according to Wonderful Citrus’ Rooke, and the company’s Wonderful Seedless Lemons line is now in its third year, and will launch this season in October with limited distribution, focusing on select markets and channels.

“Wonderful Seedless Lemons are the same juicy lemons you’re accustomed to, but without the pesky seeds,” says Rooke. “While volumes of this new, naturally seedless lemon variety are still small, this innovative product will be a game-changer in produce as production grows over the next few years.”

Grapefruit demand is up versus two years ago, adds Sunkist Growers’ Ward. “This past summer during the California grapefruit season, we discovered a new shopper to this category.”

4. CALL OUT THE FLAVOR FACTOR

“At retail, the health benefits over the last year and a half have made a difference. But we are seeing high consumer demand from younger areas as well,” says Teague. “We believe there new flavor profiles that are swinging toward younger generations that are providing something a little different.”

Over the last few years, Bee Sweet’s Bienvenue adds, the industry has done an excellent job in educating shoppers and niche markets about specialty citrus varieties such as Minneolas and Cara Cara navels and have used retail promotions and social media platforms to highlight the varieties’ characteristics and nutritional information.

One type of specialty citrus poised to make a splash in the category is the Dekopon, a large variety of Japanese mandarin.

“The Dekopon is poised to make a big impact in the market, especially for the mid-season push. It could easily be what the Honeycrisp was for apples. It’s pricey, but it has an incredible flavor and is easy to peel and eat,” says New Seasons Market’s Fairchild.

Suntreat Packing & Shipping, in Dinuba, CA, sells its Dekopon under the Sumo brand.

“Sumo Citrus is a unique piece of fruit that is only available for a limited time of the year (January-April). We have found that consumers are willing to pay the premium for this prized piece of fruit, however, we like to support trial even further with promotions and digital coupons during the season,” says Ron Steele, vice president of sales for Delano, CA-headquartered AC Foods, which manages sales and marketing for citrus portfolios including Sumo Citrus.

Trinity Fruit Sales will introduce its Dekopon to the market in commercial quantities this season under its Big Honey brand.

“Our production has tripled this year over last year and we expect it to triple again over the next five years,” says Levon Ganajian, vice president of retail relations for the Fresno, CA-headquartered company.

5. COOK UP CULINARY REASONS TO BUY

Limes and lemons are always in the top 10 unit-mover reports each week at Pyramid Foods, says Hendricks. “We display these in the produce aisle and beverage aisles — limes with the beer and pop and lemons with the pop, tea and beer — and in our seafood departments.”

Mandarins continue to predominately be a handheld snack, but are versatile and make great additions to smoothies, salads, desserts and beverages, suggests Fowler Packing’s Bienvenue. Plus, recipe cards are a way retailers can introduce new varieties to consumers who may not be familiar with the product.

Sunkist Growers offers citrus recipes for snacks, meals, desserts and cocktails for at-home chefs of all skill levels. The cooperative’s recent shopper behavior study shows that 75% of lemon purchases were for a recipe.

“We love to collaborate with chefs and food and nutrition experts to inspire people to serve citrus in fresh new ways. We also encourage consumers to use the whole fruit, from zest to juice and peel to pulp,” says Ward.

The best way to generate excitement for California citrus is to make sure it is visible to the consumer, says Bee Sweet’s Bienvenue. “From the store to online platforms, showcasing the nutritional benefits, characteristics and flavor profiles of each variety are all great ways to keep citrus at the top of mind for shoppers making their grocery lists.”

In-store, “retailers continue to leverage our eye-catching branded packaging and high-graphic in-store point-of-sale (POS) displays, including bin bases, posters, and balloons to drive impulse citrus purchases,” says Wonderful Citrus’ Rooke. “Our large in-store displays in the produce department — such as our Grove of Goodness displays for Wonderful Halos — drive 18% faster velocities than a product without a display.”

To add excitement to the holidays, Sunkist Growers will offer special 10-pound cartons of navel oranges. The limited-edition ELF movie-themed holiday package will be available at select retailers as early as November.
“Navel oranges have been an integral part of holidays for over a century, and this box is specifically designed to inspire new traditions, like a movie night in,” says Ward.

The pandemic shifted consumers to online shopping, and many retailers ramped up these platforms in a big way as a result, says AC Foods’ Steele. “We were excited to have opportunities to showcase Sumo Citrus on some of these platforms, including landing page spotlights, digital endcaps and digital coupons.”

This season, Fowler Packing is marketing more expansively, with a robust marketing campaign that includes traditional TV, streaming, social media, out-of-home, and in-store point of sale. The campaign will run nationwide in select markets from late November through April.