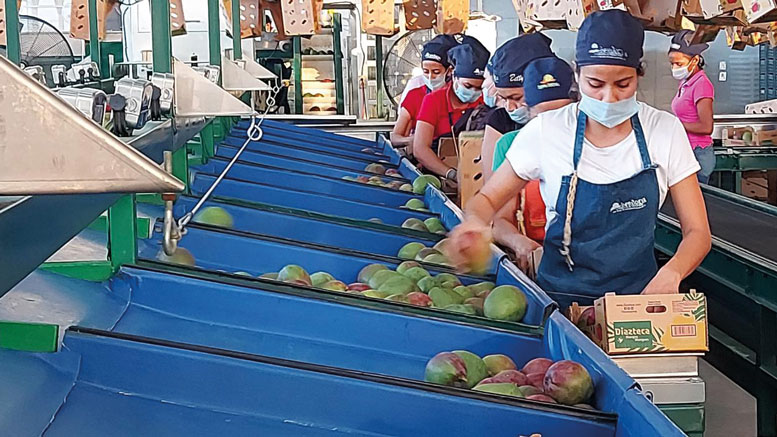 Two trends in Western Mexican agriculture are diversification of crops produced and lengthening of production times to get a jump on or extend the seasonal supply.

Western Mexico, specifically the states of Sonora and Sinaloa as well as Jalisco and Oaxaca further south, are where much of the tomatoes, cucumbers, bell peppers, squash and other winter-harvested vegetables consumed in the U.S. and Canada from December through April are grown. For more than a century, it’s the land located in a long-time strategic mountain pass at the crossroads of Arizona and Mexico, that has served as the major pipeline through which this fresh produce is trucked to retailers and ultimately consumers across North America.

Numbers nicely underscore the importance of the Mariposa Land Port of Entry, in Nogales, AZ. In 2020, 6.7 billion pounds, or $3.7 billion worth, of fresh produce entered the U.S. through this port, based on U.S. Department of Agriculture (USDA) Agricultural Marketing Service (AMS) figures. What’s more, during the peak season in late January, a record 1,900 trucks with trailers filled mostly with fresh produce and some with other goods entered the U.S. through Nogales, according to information provided by the Nogales, AZ-headquartered Fresh Produce Association of the Americas (FPAA).

“We get all of our tomatoes, bell peppers, cucumbers, eggplant and squash, you could just say most of our store’s wet rack items in the winter excluding leaf lettuce, through Nogales. Melons are big too,” says Jason Kazmirski, retail specialist for Charlie’s Produce, in Seattle, WA, which supplies several independent retailers in the Pacific Northwest as well as larger chains such as Fred Meyer and Sprouts.

Western Mexico has for many years specialized in agriculture with very experienced and innovative farmers, favorable land and weather, and proximity to the U.S. that makes it an ideal region for fresh produce suppliers, according to Hermy Torres, manager at iDeal HarBest, in Nogales, AZ.

“During the 2020 pandemic year, U.S. grocers were able to keep shelves stocked with product from West Mexico with minimal interruptions, despite increased demand,” says Sandra Aguilar, in marketing and strategic planning at Ciruli Brothers, LLC, in Rio Rico, AZ. “West Mexico has been supplying quality fresh produce to the U.S. for over 100 years. Items grown in this region replenish U.S. supermarkets during the coldest months, which help keep prices affordable and supplies consistent.”

Some of the biggest trends are the move to protected agriculture, where Mexican growers have adopted shade houses to grow their crops, says Gil Munguia, division manager for Nogales, of the Giumarra Companies, headquartered in Los Angeles, CA. “Shade houses are high tech warm-weather adaptations to greenhouse technology that do not require the tremendous energy inputs (e.g., natural gas and electricity) and are growing in use in Europe, Asia, the Middle East, and other parts of the world. Benefits include greater yields, lower insecticide use, and better quality. Mexico is also tuned into the preferences of American consumers, and they are our next-door neighbors, so shipping times are short, unlike those from Europe, Asia, and South America.”

Two trends in Western Mexican agriculture are diversification of crops produced and lengthening of production times to get a jump on or extend the seasonal supply. Both are reflected in what produce is shipped through Nogales.

Tomatoes are the top commodity shipped through Nogales, according to USDA-AMS data, as supplied by the FPAA, representing 19% of all crops. Interestingly, the dramatic shift toward consumers buying food at retail rather than restaurants over the past year due to the COVID-19 pandemic has shown a shift toward a preference for vine-ripened tomatoes. This is according to research from the Department of Agricultural & Resource Economics at the University of Arizona and presented during the FPAA’s March 9 press release, “One Year After Lockdown, Study Shows Lasting Impact of COVID-19 on U.S. Fresh Tomato Markets.”

George Agorastos, in operations at Arizona Sky Produce, in Rio Rico, AZ, adds, “Our volume overall has expanded, but our organic volume definitely has greatly expanded.”

In terms of the new availability of products grown organically, Giumarra’s Munguia says, “our organic hard squash program is really exciting for us. We have three organic hard varieties — acorn, butternut and spaghetti – all available from late April through June.”

Notable from Western Mexican growers has been the ability to adapt production to meet shifting retail and consumer demands, according to Lance Jungmeyer, FPAA president. “Growers have invested in different kinds of protected agriculture from glass to high tech plastic shade houses at lower elevations and in microclimates to increase both the volume and variety of fruits and vegetables as well as when these items are available.”

The top eight commodities previously uncommon though increasing in volume through the Port of Nogales to the U.S. are: Brussel sprouts, lemons, broccoli, figs, tangelos, strawberries, radicchio and pomegranates, according to USDA AMS data, as provided by the FPAA.

“We have been working with Brussels sprouts for a few years now, and we have also been exploring new items like oriental fruits and herbs, Peas and Shishito peppers,” says iDeal HarBest’s Torres. “We always try to maximize efficiencies in packaging that would in turn provide benefits to consumers and suppliers, like private label recyclable bags packed at the ranch level with the highest food safety and quality standards. The consumer demand has definitely been affected by the pandemic, and it has been very challenging to maintain the volume growth we were experiencing before, but we are optimistic that things eventually will return to a more positive normal.

More blueberries and blackberries are being grown in Western Mexico, with both available in March and April before the U.S. season starts in May, says Rod Diaz, marketing director for Diazteca, in Rio Rico, AZ.

“Criss-cross deals are the opportunity that this earlier availability of berries out of Mexico provides. In other words, we’re still getting berries out of Chile at this time, so depending on how Chile is finishing up and how Mexico is starting, there can be enough supply for a good price promotion on berries to our customers,” says Charlie’s Produce’s Kazmirski.

Several growers are expanding operations in Western Mexico to target specific windows of opportunity. For example, early plantings of watermelon in Sonora means this fruit is now available in mid-March, says Scott Vandervoet, in sales and marketing at Vandervoet & Associates Inc., in Rio Rico, AZ. “This timing still enables growers to have enough watermelon to supply Memorial Day in May.”

This is the second year that Divine Flavor will have commercial quantities of proprietary table grapes varieties starting in April out of Jalisco.

“This is the perfect opportunity, just before Sonora comes in, to get customers going on high flavor varieties like Cotton Candy, Gummyberries and Jellyberries,” says DuPuis.

Similarly, Diazteca added 300-acres of organic mangos in the southwest Mexican state of Oaxaca in 2016, giving the company seven times this acreage including farms in Sinaloa, says Diaz. “We had our first test shipment last year, and this year will be our first commercial quantities. Varieties are primarily Tommy Atkins and Ataulfo. This will strengthen the supply of organic mangos into the U.S. from February to May. We also have new state-of-the-art packing shed in Oaxaca to accommodate this production. With this new facility, we can handle specialty packs like mesh bags, RPC’s, half and full pallet displays, and do so at a volume of up to 20 loads per week.”

First built in the 1970s, there was a major upgrade and expansion to the Mariposa Land Port of Entry in Nogales completed in 2014. The 55-acre site contains 270,000 gross square feet of buildings and inspection facilities and is one of the U.S.’s busiest land ports.

“Over the years, the Nogales port of entry has made continuous improvements to handle more volume with better infrastructure. The current port is a model of efficiency, made possible by well-choreographed teamwork between US and Mexican government agencies, exporters, and importers. Crossings are expedited quicker through the port, which means fresher produce for the consumer,” says Ciruli’s Aguilar.

Since the fresh produce industry is seasonal in Nogales, staffing the port can be a challenge because of the seasonal peaks, says Giumarra’s Munguia. “But, the USDA, the State of Arizona, and other government agencies continue to find ways of solving this problem.”

On the plus side, adds Vandervoet & Associates’ Vandervoet, “The Nogales port of entry is now open seven days a week to commercial traffic. It was six, but now it’s open on Sundays. This certainly helps with a product like fresh product.”

Outside the port, Nogales is home to several fruit and vegetable businesses from customs brokerage services to warehousers, repackers and distributors. This makes Nogales a one-stop-shop for fresh produce and mixed loads easier.

“We are very proud of our new large, modern facility in Nogales. Our facility offers uninterrupted service, which helps us meet the customized needs of our customers across the U.S. We have the infrastructure in place to provide customers with our comprehensive suite of services including our own transportation. We strive to be a well-oiled, services machine for whatever our customers need,” says Giumarra’s Munguia.

Looking ahead, there is a $134 million construction project underway to build two flyover ramps on Arizona State Highway 189 to connect to Interstate 19. When completed this fall, trucks won’t have to stop at three traffic lights, which the FPAA estimates will save 10 to 12 minutes northbound. For fruits and vegetables, this means even fresher produce from Mexico to customers in the U.S. and Canada. `