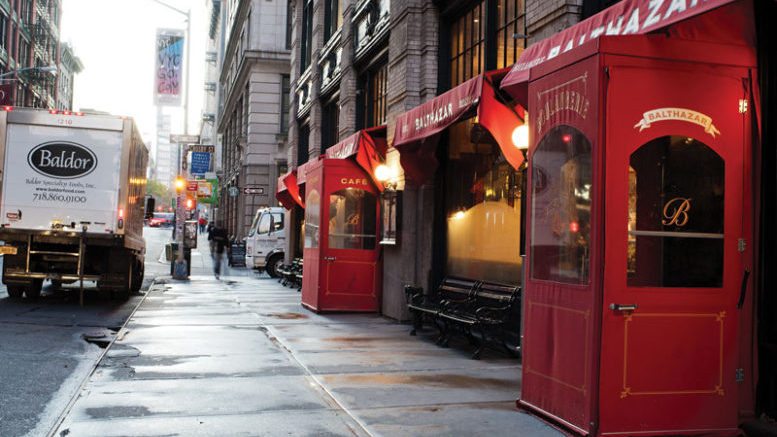 Where the asparagus originates is becoming as important as how the asparagus is grown to chefs and patrons at restaurants from coast to coast. “Local,” like “organic,” is no fad, but what “local” actually means depends on who you ask.

With consumer interest in transparency and sustainability driving the demand, distributors, growers and restaurants are developing innovative programs to make locally grown fruits and vegetables accessible to restaurants and a wide array of foodservice operations.

For chefs in big cities, it is like they have a farm down the street. For growers, the trend increased market access and changed the crops they traditionally grew.

New York City-based Baldor Specialty Foods created its Pledge Local initiative to make life easier in hectic restaurant kitchens. “Chefs want to cook local, but we were asking too much of them as foodservice customers. Most don’t want to deal with choosing from 100 kinds of heirloom tomatoes and where they came from,” says Benjamin Walker, director of marketing for the food distributor. About 75 percent of Baldor’s business consists of foodservice clientele in the Northeast and Mid-Atlantic states.

While the local trend is growing, it has its limits because of supply and cost. “Our local orders are up 50 to 100 percent in the past four years, but there’s only so big it will get,” says Walker. “There’s no citrus or tropical and winter is challenging. In the summer we are only getting to about 15 percent local produce, but this allows us to get a part of our supply from small farms,” says Baldor’s Walker.

Putting the word “local” in front of every vegetable or fruit on a restaurant menu is easy. Sourcing local produce for a single café can be a problem on many levels including food safety. The logistical challenges only get multiplied for a multi-unit national dining chain.

“Our menu states ‘Fresh Ingredients; Locally Sourced,’ but it is a challenge with produce from a purchasing and execution standpoint to make that happen with 46 units nationally,” says Jessica Smith, senior director of marketing at Georgia-based Ted’s Montana Grill. The chain is famous for sourcing most of its bison from the ranches of owners Ted Turner and George McKerrow Jr. 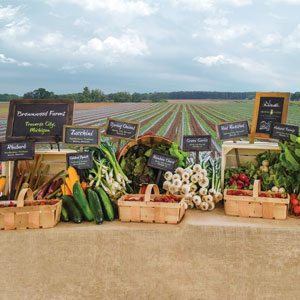 The Veloccity local produce program for Chicago-based Midwest Foods was created when the distributor received a large supply order stipulating that 25 percent of the produce had to be sourced locally. (Photo Courtesy of Midwest Foods)

Collaboration with food distributors and farmers is helping make sourcing local produce much easier, says Jim Ebersold, purchasing manager for Ted’s Montana Grill. “Pro*Act’s Greener Fields Together program really helped us to identify local farmers who can supply various locations with produce that meets our specific needs. We deal with 16 different produce houses nationally through Pro*Act, but we basically have one-stop shopping. I get an advance calendar about what’s going to be available in each market,” he says. Marketing materials about the farms are conveyed to Ted’s managers and servers to share with diners.

“The program allows us to adjust the produce we’re featuring seasonally,” says Ebersold. Ted’s seasonal local vegetable side dish has varied from Southwestern corn to a tomato and Blue Cheese salad with balsamic vinaigrette.

“Local” is rising in the popularity polls. “The percentage of local produce Ted’s uses has been growing steadily 2 to 3 percent a year. In 2015 local grew to 16 percent of the total, and it should grow to 20 percent this year,” asserts Ebersold.

Houston, TX-based FreshPoint is a fresh produce distributor and a subsidiary of Sysco. With its strong commitment to helping local markets grow, FreshPoint plays an active role in connecting farmers with its foodservice customers in hospitals, retail, restaurants, schools and universities. Customers are demanding more local and sustainably produced foods, requiring FreshPoint to work through its distribution network to bring farm-fresh produce to the plate in both commercial and non-commercial settings.

“UBU is a program that we started in January 2016 to raise awareness of food waste,” says Britni Webster, director of business development and marketing at FreshPoint. “We sell items like scarred, misshapen produce that is going to be chopped up for salsa, or a mixed-size case of apples for our universities to put in baskets in the dining hall. The demand for perfectly shaped produce has changed because the consumer understands quality doesn’t equal appearance.”

The Greener Fields Together (GFT) initiative has been a win-win for growers and foodservice companies, says John Alpers, vice president of sales for Atlanta-based Royal Food Service. 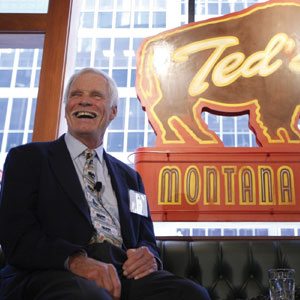 “GFT makes certain these smaller farmers have the right agricultural practices in place before we make purchases for our customers. We work with the growers, so they don’t have to foot the entire cost of certification,” says Alpers.

“Each customer decides what local means to them. Our working definition of local is anything within a day’s drive — 500 miles or eight hours, or that it‘s from a bordering state,” says Alpers.

One fan of Royal’s local program is chef Chris Hall, co-owner of three Georgia eateries: Common Quarter, Local Three and Muss & Turner. “It has really helped put the farmers in touch with the restaurants in a streamlined way. I have a consistent supply of local corn this year. Instead of one type of tomato, I choose from varieties like Cherokee Purple and Cherokee Rose,” he says.

Over time, one farm’s crop can become a local benchmark. “There are certain farms that are a brand. Pearson peaches is one of those where you want to put the name on the menu,” says Hall.

It’s not hard to deliver “local” produce once you know what it is. “How do you define ‘local?’ Is it within 10 miles or 100 miles or within the state? It’s up to the customer,” contends Lloyd Ligier, vice president for business development of Monterey, CA-based Pro*Act, which has grown to 38 member distributors.

“We help farmers get certified to supply our distributors. We offer farmers grants for infrastructure improvements, marketing, buying machinery, further education, to go organic or to build an effective website to help tell their story,” says Kathleen Weaver, Pro*Act’s supply chain sustainability manager. She works with farms to implement GFT.

“These are long-term relationships. Local family farms don’t necessarily have the volume to immediately supply distributors. We help them gradually build their capacity,” says Weaver.

Marcus Agresta, marketing director of Indianapolis-based Piazza Produce, says he knows customers are using the marketing materials about the farms that arrive with his locally sourced produce.

“It’s always cool to me when we go out to eat, and the server says that so-and-so farms grew the tomatoes, and I know it’s one of ours.”

“It’s always cool to me when we go out to eat, and the server says that so-and-so farms grew the tomatoes, and I know it’s one of ours,” says Agresta.

Decatur, GA-based Twain’s Brewpub & Billiards was one of the first restaurants to sign up for GFT. 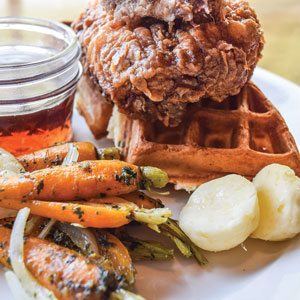 “I don’t have time to shop for vegetables. I tell them: ‘If it’s local, then send it to me.’ That way I don’t have to think about it,” says Savannah Haseler, executive chef at the restaurant and at the newly-opened Comet Pub and Lanes in Atlanta

“GTF gives me the right produce I can use in this setting — a brewpub not fine dining. If you can buy local, and it’s only a little more expensive, it’s worth it for the quality,” she says.

Diverse and sometimes unexpected produce also arrives from the CSA (Community Supported Agriculture) share that Twain’s has from a local farm. “One week we got a whole case of different radishes. We ended up making these great radish preserves,” says Haseler.

It’s hard to avoid locally grown vegetables at Peach & the Porkchop. The restaurant is near a farm that grows some crops for the restaurant.

“In summer I define ‘local’ as being grown within the zip code. When I talk to customers I can tell them exactly where everything on their plate comes from,” says Charles Staley, co-owner of the Roswell, GA-based restaurant. That focus on transparency includes a 23-item kid’s menu.

Year-round Staley sources through Atlanta-based Royal Food Service to ensure a dependable supply. “In the winter, it gets tougher, and we start to reach into Florida to source. Produce that is local and organic is very expensive. I may pay $4 a pound for heirlooms, but I bet they are the best damn tomatoes you ever tasted. Our Caprese salad blows me away,” says Staley.

Gearing Up For Demand‭ ‬

The Veloccity local produce program for Chicago-based Midwest Foods was created when the distributor received a large new supply order stipulating that 25 percent of the produce had to be sourced locally.

“We always believed in local, but we had to look at ways to increase the availability of local produce. The farms need to get a third-party audit for certification to supply us,” explains Mary Ann Fitzgerald, director of the Veloccity program for Midwest Foods.

“One thing we did was talk to the farmers about planting less cabbage and growing Tuscan kale, toybox peppers and other crops we know we can sell for a premium,” says Fitzgerald.

“We always believed in local, but we had to look at ways to increase the availability of local produce. The farms need to get a third-party audit for certification to supply us.”

Midwest Foods defines “local” as being grown within 150 miles of the customer’s location. “We have farms in Indiana, Wisconsin, Michigan and Illinois. If a customer is in Wisconsin, then we source from a Wisconsin farm,” she says.

When eateries sign onto the program, they receive produce marked “Local Certified.” The box contains information about who grew the produce.

“We found it helps restaurants talk more about their local sourcing on social media. Some of the restaurants partner with the program and commit to buying ‘X’ amount of a crop from a particular farm,” she says.

Midwest Foods’ local committee of chefs, buyers and growers meet quarterly to extend the reach of the farms including the IDP (Imperfectly Delicious Produce) program offering farms’ No. 2 items.

“I thought it was another fad. I honestly believe it’s here to stay now. Mileage matters when you’re talking about produce.” 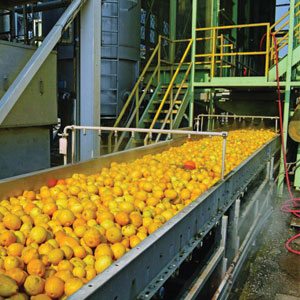 “We buy it for a discount and pass it along. We use a lot of it ourselves in our Edible Cuts processing facility,” says Fitzgerald.

“True story: I just packed up a box of mixed lettuces and brought it to them,” he says. Unruh got his first order within a week.

When the local trend began, Unruh was admittedly doubtful. “I thought it was another fad. I honestly believe it’s here to stay now. Mileage matters when you’re talking about produce,” he says.

Baldor’s Pledge Local initiative removes the “local” equation from the decision-making process. “Restaurants authorize Baldor buyers to automatically substitute local produce alternatives that are the same or no more than 10 percent more expensive,” explains Benjamin Walker, director of marketing for the New York City-based food distributor. “Commit to buying local, so I can commit to buying from the farmers,” he says, adding that Baldor now has 223 Pledge Local customers.

Upscale restaurants are not the only ones requesting local sourcing. “A lot of companies see it as part of their mission to support local growers and sustainability. Corporate cafeterias and higher education foodservice lead in this area. Yale University, Amtrak or Yankee Stadium, everybody’s trying to use local ingredients,” he says.

Baldor’s system works, because most of the company’s deliveries are early in the morning. “Everybody wants it at 7 a.m. and it’s in a concentrated delivery area. It leaves the truck empty by midday, so we send them to backhaul from the farms to the warehouse. Basically, it’s farm-to-restaurant in about 24 hours,” says Walker.

Restaurants use an online ordering tool to show them how far they are from the source. “We have almost 500 local farms supplying us from Maine to Jersey. Fifty farms offer a real time shop-by-farm feature,” he says.