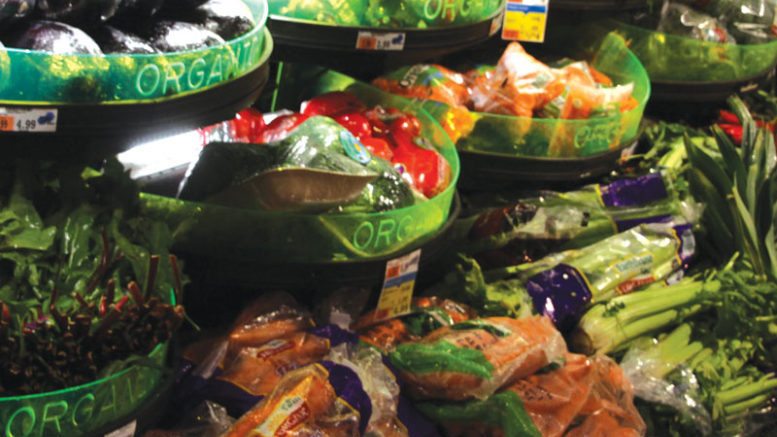 The once-pioneering sector has segmented into corporate and local.

Forty years ago, organic produce was grown largely by a handful of small farmers scattered throughout the Monterey Bay, Oregon and New England. Distribution of their fruits and vegetables was hit-and-miss, as these pioneers had no established supply chain to rely on and, generally intent on getting back to nature, little inclination to develop their own business skills. 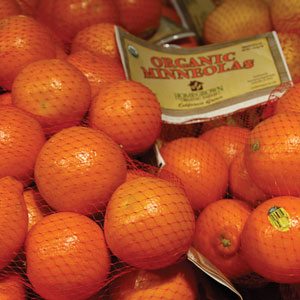 “More and more growers, particularly in California, were farming organically, and supplies were ready to meet the demands of an ever-growing population ready to explore a diet that featured organic foods,” recalls Simcha Weinstein, director of marketing at Albert’s Organics, Asheville, NC. “Natural food stores were popping up out west, as well as in college towns and in larger metropolitan areas. And yet, there was still a slight hurdle that needed to be overcome. If the growers were responsible for delivering their harvest to the stores as well as growing the food, as it was back then, this would cut back considerably on their production time.”

Albert’s Organics began as a distributor in the early 1980s and has grown with the movement into a major enterprise shipping more than 300 varieties of organic fruits and vegetables from seven distribution centers around the country.

As the acreage, consumer demand and variety of organic fruits and vegetables have exploded over the years, so too has a distribution system that now brings produce to mainstream supermarkets in every corner of the country.

Barely more than 40 years after California Certified Organic Farmers first formed to verify whose fruits and vegetables were truly organic, those pioneer farmers have multiplied beyond all 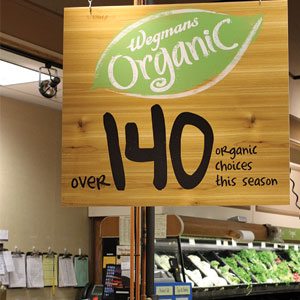 expectations and have even been joined by fledgling divisions of the largest produce operations in the country.

Nationwide the organic sector has gained a major share of all fruits and vegetables, including in the largest mainstream markets.

“Most retailers carry less organic than conventional – overall, about 13 percent of produce sales nationwide are organic, according to the Organic Trade Association’s 2016 Organic Industry Survey,” says Samantha Cabaluna, managing director of brand communications for Earthbound Farm, San Juan Bautista, CA. “Overall in organic food — all categories, not just produce — the largest chunk, about 35 percent, is sold in mainstream retail grocery, with club and warehouse stores being the fastest growing channel.”

Drew and Myra Goodman started Earthbound Farm on a two-and-half acre piece of ground in the Carmel Valley in 1984, and built their company into a nearly 50,000-acre operation that was the pioneer in taking organic produce into conventional supermarkets.

“At this point, there are more similarities than differences between organic and conventional distribution,” says Cabaluna.

The increased demand for organic began with staples like salad mixes, berries and bananas, but is steadily reaching beyond to also include other mainstream produce items.

Grimmway grows and ships dozens of organic vegetable and melon crops under the Cal-Organic brand.

Supply of organic produce, and the distribution chain that brings it to retailers, has grown to become almost indistinguishable from the conventional, but there are still questions unique to the organic that have no right answers.

The first question is whether to have a special staff source the organic fruits and vegetables, or simply make that one of the tasks assigned to category managers who also source conventional produce.

“There are advantages in the form of expertise and focus with a specialization approach,” says Greg Corsaro, president of Indianapolis Fruit Company, Inc., Indianapolis. “There are also advantages to have buyers purchase both organic and conventional produce without having parallel staffs. Oftentimes, both the organic and conventional items of the same product or commodity are purchased from the same grower/shipper, the loading of both conventional and organic items is in the same area, or knowledge of a particular item or commodity is such that the person with that knowledge should purchase both.”

Corsaro believes it wise to have at least some degree of specialization in sourcing the organic produce.

Once the produce has reached the distribution center, there are still special requirements to ensure that the organic is properly inventoried and handled.

“There are some different warehousing requirements for the organic certification,” says Corsaro. “The biggest challenge is the slot segregation and the separation of product at delivery to ensure organic produce is received, picked, loaded, and delivered accurately.”

After the organic produce reaches the store, there are yet more decisions on whether to display it next to the conventional counterpart, in a special organic section, or as the only option.

“At store level, all stores determine whether to use an integration, a segregation, or a combination approach to the merchandising of their produce,” says Corsaro.

In the case of some crops like the spring mix, clipped spinach, and other short-season salad products that are mechanically harvested and shipped bagged or in hard plastic containers, organic is so strong there is frequently no reason to carry a conventional alternative.

“If you’re a salad producer, why bother to have both conventional and organic,” asks Andy Martin, president of A&A Organic Farms, Watsonville, CA. “The whole trick is everything is mechanical.”

A&A Organic Farms ships fruits and vegetables for a network of small to medium growers. Its salad products have such economies of scale in everything from harvesting to trucking that they can be sold at extremely small premiums and are frequently only offered as organic.

“With the increase in the demand for organic produce, the volumes are not always small,” says Corsaro. “That being said, transportation costs need to be spread over as many packages as possible to maximize the economic benefits. Therefore, the smaller the order or load size, the more expensive it is to distribute.”

The distribution of these high volume organic salad products to the largest retailers has reached a level of efficiency unthinkable among the pioneers of the 1970s.

“The demand for organic is definitely increasing; the demand is huge. The number of growers who are devoting significant acreage to organics, particularly large scale growers, is also increasing.”

“Occasionally a retailer or two could actually pick the product up at the farm, but that option was available only to a very limited few,” recalls Albert’s Weinstein. “What was needed was an entity that would step in and cover the transportation and delivery needs that would connect the growers with the retailers and provide communities with their organic food supplies.”

In the early days, both the volume and quality of available organic produce were unpredictable but, driven by increased consumer demand that seems to have no end, organic farming has reached the point that even the largest retailers can generally count on a regular supply.

“The demand for organic is definitely increasing; the demand is huge,” says Karen Salinger, sales director and co-owner of Veritable Vegetable, San Francisco, CA. “The number of growers who are devoting significant acreage to organics, particularly large scale growers, is also increasing.”

Veritable Vegetable began in the 1970s as part of the People’s Food System in the greater San Francisco Bay Area, and has grown to become a leading distributor of organic fruits and vegetables throughout Northern California with a continuing strong community orientation.

“The supply has been strong, and we’re not seeing unusual supply gaps,” says Salinger. “We only see the gaps caused by the weather. Supply has been very strong for a long time.”

Not only is the supply reliable, but the variety available in organic produce is also pretty much indistinguishable from conventional. 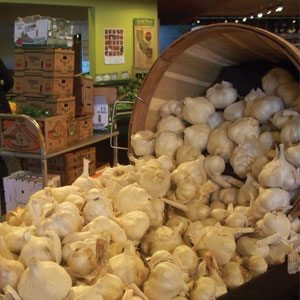 “The varieties are the same as for conventional,” says Martin of A&A Organic Farms. “After eating rutabagas in the winter, customers are ready for strawberries or melons. It’s the same as what the conventional growers are doing. Organic in general is increasing in demand and popularity.”

The strong base in local natural food stores and farmers markets remains an important retail outlet for organic produce.

“When we first opened our doors, our customers were mom-and-pop natural foods stores, co-ops and buying clubs,” Weinstein recalls. “And even to this day, these groups still represent the majority of our business. We have delighted in watching them grow and flourish, and, of course, we have the opportunity to provide their customers with organic fresh produce.”

While organic produce remains basic fare at the local natural food stores and co-ops, the category has also earned a permanent place at the largest national produce retailers.

“I sell to natural food stores, but I have seen conventional stores increase their organics,” says Salinger. “When I walk into a Safeway or Costco, they have organic bananas and apples; that’s for sure. They’re all going to have organic grapes, peaches and nectarines.”

The Logic of Overproduction

Organic supply has even reached the point that, like conventional production, it can be subject to the extreme price fluctuations that come from oversupply.

“We’re seeing big conventional companies get into organic who had never done it before,” says A&A’s Martin. “They’re growing broccoli, celery, and celery hearts. From a farmgate perspective, if they get seven dollars for a case of conventional broccoli, they figure nine dollars is great for organic, even if the market has been $16. I call them market-busters.”

For old timers in the sector, like Martin, this has not always been a particularly salutary development.

“I used to grow organic spring mix and put it on the plane for New York at $30 a box, and couldn’t send enough,” says Martin. “Now it’s seven to nine dollars.”

He wonders out loud if overproduction and declining prices will lead to a shakedown in the organic farming business.

“It’s hard to predict the logic of overproduction,” says Martin. “We’re getting so many organic tomatoes out of Mexico and Canada, you wonder how long these guys can go at these prices. You wonder if the big guys are trying to drive the little guys out, and then raise the prices. The chains are loving it because they are seeing record low prices.”

But the strong trend over the past decade toward locally grown produce, which is particularly strong among organic consumers, may provide breathing room for the relatively small producers.

“Perhaps one of the more significant changes is the focus on locally grown that has emerged over the past 10 years. Even as we have seven distribution centers around the country, we still maintain a strong focus on local and regional procurement,” says Weinstein. “Albert’s has a recruitment program for local organic growers, where we help them gain certification, etc., in order to help these growers become organic and find a home for their product.”

We may be headed toward segmentation that leaves us with both a highly efficient, well-capitalized supply chain of organic produce headed toward national chain retailers, and a still vibrant collection of natural food stores, co-ops and farmers markets served by smaller local organic growers.

“Larger producers of organic produce distribute in the same ways as conventional producers: both are sold direct to retailers, who then distribute through their own warehouses, and also to wholesalers/distributors,” says Earthbound’s Cabaluna. “Smaller growers may work directly with individual stores locally.”

As the largest organic producers have gone corporate in their sales, the small-scale operations that started the movement remain as viable as ever.

“Even as the industry has changed, the basic model of distribution remains the same . . . we work directly with growers and then provide our retail customers with product that they sell to their shoppers,” says Weinstein. “In the end, distribution is all about connecting the growers with the consumers — it really is a farm-to-table event.”