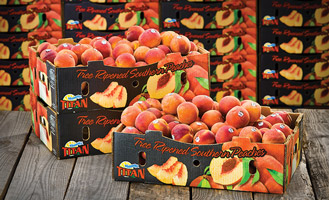 The Palmetto State is the largest producer of peaches on the East Coast, and the second overall U.S. producer. The state markets its peaches’ flavor.

“Our slogan is we are the tastier peach state,” says Katie Pfeiffer, director of merchandising for the South Carolina Department of Agriculture (SCDA). “We have a sweeter and more acidic peach. We have a longer season than others in the Southeast, from May to August, maybe into September sometimes when we have a good year. We have a lot of varieties, which produce the flavor.”

Thanks to improved varieties, South Carolina growers begin harvesting a week to 10 days earlier than they did in the past, with shipments beginning May 5-10, depending on weather. “We can go longer into September than our competition,” says Matt Forrest, co-owner of Dixie Belle Peaches, which grows and ships from Ridge Spring, SC. “We can set up programs that can carry retailers from the beginning to the end.”

South Carolina’s slightly acidic soils, hot days and humid nights enable growers to produce peaches ripened on the tree and ship longer past summer, explains Matt Cornwell, sales account manager of Titan Farms, Ridge Spring, SC. “Producers send peaches to market starting in May and harvest all the way into September, a longer season than other states,” he says. “Varieties grown in South Carolina are known for their perfect balance of sweetness and acidity. Growers in South Carolina combine generations of growing expertise with state-of-the-art packing facilities to put a ‘tastier peach’ in the box.”

Shipping peaches long distances can be problematic. “The advantage of Southeast peaches is that we can get them to market usually within a day,” says Greg Reighard, a professor emeritus and visiting professor of horticulture at Clemson University in SC. “How quickly we can get them to the market is a very important factor in the quality. Because the fruit is not in cold storage for very long or at all, that’s what differentiates Eastern and Southeast fruit. You need heat and temperature to produce quality peaches. We have that in the Southeast.”

The state enjoys a strong peach reputation. “We always say we ripen ours on the tree,” says Joe Watson, co-owner of Jerrold A. Watson & Sons, based in Monetta, SC. “We don’t have to pick them earlier and don’t have to take them to storage conditions to ripen. They’re cooled and shipped. Anywhere and everywhere you go, if people mention peaches, they always talk about South Carolina. Having high-quality, high-sugar peaches is what consumers want and what we strive to give to them.”

Peaches with fewer food miles appeal to retailers, says Benjie Richter, partner with Richter and Co., Inc., Charlotte, NC. Southeast shippers are closer to most East Coast and Midwestern retailers, he says. “We can be to the Eastern corridor cities of Boston, Baltimore and Washington, DC, and the Midwestern cities of Chicago, Cleveland and Detroit within 24 to 48 hours off the tree,” says Richter. “In most cases, our fruit is usually packed that day or the next day. You can’t get any fresher than that, which retailers realize. They like the freshness and the fact our fruit doesn’t have the food miles you have from California.”

Because peaches were profitable when South Carolina growers began growing them, they were grown all over the state. Because of freezes, production has since focused on areas such as the Ridge, the sand hills and the Piedmont regions, says Watson. “Over the years, where peaches are now grown, there are microclimates amenable to growing peaches,” he says. “Other places went out of production because they had frost and couldn’t grow peaches. The people who are in it now are the ones who have been in it for years and grow only high-quality peaches.” 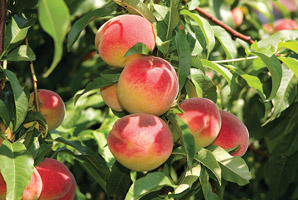 Peaches produced in summer months in Georgia are the highest quality, says Will McGehee, partner with Genuine Georgia Group, Fort Valley, GA. “We hang our hat on flavor first,” he says. “Our flavor comes from our climate, which is perfect for growing great peaches. Our flavor also comes from our ability to get the peach off the tree and into the market at the fastest rate possible. We don’t want to store them, we want to sell them fresh. Shoppers don’t want them to taste like a fridge, so time off the tree is pretty critical.

“We are able to get our peaches to just about every metropolitan area within a day. That’s a big deal when you’re dealing with a peach, which isn’t like other commodities which don’t mind being stored, like apples, bananas or citrus.”

The logistical benefits help retailers. “Georgia enjoys important production and marketing advantages, primarily its proximity to Eastern markets and favorable prices because of early harvests and high-quality fruit production,” says Julie McPeake, chief communications officer with the Georgia Department of Agriculture. To give Georgia peaches more time on the tree and less time until it gets to retail customers, most of Georgia’s fruit is picked, packed and shipped in the same day, she says. “We gladly take on this logistical challenge because we are simply obsessed with flavor,” says McPeake. “It’s all we think about.”

The first Georgia peaches were shipped to New York between 1858 and 1860. They were transported by wagon to Augusta, GA, then by shallow-draft boat to Savannah, GA, before being loaded on a steamship. That’s when Georgia earned its “Peach State” designation during the three decades following the Civil War, notes McPeake.

As with blueberries, Florida’s niche is being the first to supply U.S. peaches during an absence of fruit. “As Chile finishes in early March, the Florida peach production will be the first domestic area that will start for the year,” says Al Finch, president of Florida Classic Growers in Dundee, FL. “The Florida peach season is sandwiched between when Chile finishes and before other Eastern regions and California peaches start. Florida fills that six- to eight-week gap in the marketplace when no peaches are available to consumers.”

Many of Florida’s citrus growers have turned to peaches to diversify their acreage, says Mindy Lee, Fresh from Florida communications and media manager for the Florida Department of Agriculture and Consumer Services. “Seasonally stretching from Central Florida in March through South Carolina in August, peaches from Florida offer a nearly seamless category available between South and North America,” she says.

Ripened flavor is a key part of the appeal of Florida peaches. “Part of the whole Florida deal is that we come in ahead of all the other states,” says Alise Edison, vice president and owner of Deer Park Peaches, based in Deer Park, FL, on Florida’s East Coast. “Ours are tree-ripened. They don’t get sweeter. Once they come off the tree, they may get softer. We try to go for absolute tree-ripened sweetness. We’re not trying to ship them all over the place.”

Florida peaches are gaining more of a foothold in the marketplace, notes Finch. “Demand has been good,” he says. “Consumers are looking for them in the supermarkets now and are waiting for the season to begin. We are beginning to build a loyal following for Florida peaches.” Florida Classic is going into its 10th season of growing and shipping peaches.

With 22 million residents, the Sunshine State remains a key market for Southeast peaches. “Florida, the state, obviously is local,” says Finch. As many people identify local as food miles from where product is harvested, anywhere in the Southeast can almost identify with local Florida peaches into the Deep South,” he says. “Many retail groups support local grown programs. It is important in the state of Florida that Florida peaches are well-represented in the marketplace.”

Digging Up Root Sales During Fall, Winter And Beyond

Root Revival: Veggies Back In Vogue