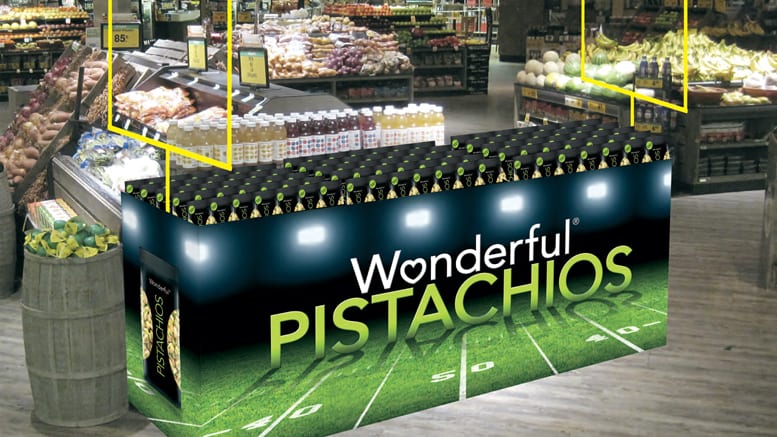 How stores can gear up and offer healthier options for the Big Game.

On Feb. 3, 2019, about 100 million people will gather around their televisions as the National Football League’s two best teams square off to determine this season’s champion.

But the real action is taking place in the produce section.

Super Bowl Sunday (Kickoff is 6:30 p.m. EST on NBC from Mercedes-Benz Stadium in Atlanta) is practically a holiday, and just as important as the game (and the commercials) is the food. People don’t simply watch the game — they throw parties and fill their tables with culinary delights.

Those aren’t exactly nutritious foods, and indeed dieting takes a back seat on Super Bowl Sunday, but healthy foods are part of the fun, too. That same report claimed Americans spend $13 million on vegetable trays and used about 104.9 million pounds of avocados to make guacamole for their Super Bowl spreads.

And that means produce sections need to get ready for some championship sales numbers in the weeks and days leading up to the Big Day.

GETTING READY FOR GAME DAY 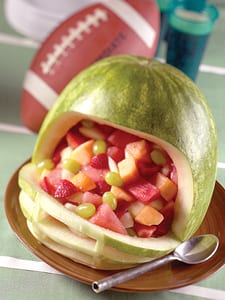 The versatility of fruits and vegetables means there are lots of ways to promote them for the Super Bowl. They can be stand-alone snacks, or used in sauces, side dishes and desserts. And their simplicity is a big selling point.

“Whether it’s tailgaters at the game, or watchers at home, consumers want ease when watching the Big Game,” says Jacob Shafer, senior marketing communications specialist for Mann Packing, headquartered in Salinas, CA. “Getting back to watching the game as fast as possible has never mattered more, and one of the biggest reasons for a consumer to be unsatisfied with a product is the amount of effort they have to put into it. Basically, tailgaters and those watching at home want quick, sometimes-healthy meal solutions that are delicious. We are focusing on continued innovation, striving to bring ultimate convenience and freshness to consumers.”

He adds that Mann has teamed up with retailers to expand shelf offerings of in-demand, fresh-cut vegetables items.

“Retailers must understand the data and the trends driving the category, especially leading up to the Big Game and take advantage of all selling opportunities,” he says.

Camille Balfanz, brand manager for Litehouse, Inc., based in Sandpoint, ID, notes that key promotions for Super Bowl include refrigerated salad dressings and dips, which are important traditional elements to snacks and meals.

And, of course, no Super Bowl party is complete without guacamole and chips.

Maggie Bezart Hall, vice president for trade and promotions for Avocados from Mexico, says guacamole is popular for football games all season long, but sales skyrocket before Super Bowl Sunday.

“Guacamole is the No. 1 usage occasion during the Big Game time period,” says Bezart Hall. “This is the time of year when avocado consumption peaks in the U.S., and consumers are preparing and bringing dishes with guacamole to the parties and events.”

She says retailers can maximize sales with eye-catching displays in the produce department, and Avocados From Mexico and Old El Paso, offer one-stop, party-spread solutions as part of their “Guac Nation” campaign.

“We feature all of the ingredients shoppers need to make game-changing guacamole, including recipes that inspire sports fans to create exciting new flavor plays of their own,” says Bezart Hall.

“Other complementary items to feature in produce, as well as center-aisle promotion items with avocados include beer, wine, tortilla chips, fresh tortillas, cups, plates, coolers and festive decorations,” she says. “Retailers can go the extra mile by adding secondary displays throughout the department, center aisle and near the check-out stands to develop easy stoppable solutions for consumers.”

Litehouse offers a Guacamole Herb Blend that uses freeze-dried herbs and dried spices for a quick guacamole that can be made with ease. “It is sold in the produce department, right next to other key guacamole ingredients, including avocados and limes,” says Balfanz.

Amber Dutra, director of public relations for Natural Grocers, a 147-store chain in 19 states that is based in Lakewood, CO, says the company plans its Big Game promotions for the Saturday before the Super Bowl, because that’s when shoppers buy food for their parties.

“We are hosting a ‘Sample Saturday’ in the produce departments at all Natural Grocers stores, where customers can taste our delicious, 100-percent organic produce,” she says.

Guacamole is the No. 1 usage occasion during the Big Game time period. This is the time of year when avocado consumption peaks in the U.S., and consumers are preparing and bringing dishes with guacamole to the parties and events.”

Some of the company’s other promotions coincide with the Super Bowl, including tastings for the launch of its Natural Grocers Brand Products. Natural Grocers also celebrates Resolution Reset Day, which is designed to remind people of their New Year’s vow to eat healthier, on Jan. 18. That promotion gives members a $5 coupon off a purchase of $53 or more that can be used until Feb. 2.

“Our customers love to try our products during our sampling events and when they are able to try a product they wouldn’t normally purchase, it often leads to a sale,” says Dutra. “In 2018, the day before the Super Bowl was a high-traffic volume day.”

Balfanz says Super Bowl is a great opportunity for the produce department.

“Year after year, we score a touchdown with our Super Bowl promotion,” she says. “During the promotion, participating retailers typically see a 40-percent increase in sales.”
She recommends scheduling football-themed promotions two to three weeks leading up to Super Bowl weekend, and that includes the weekend itself.

“This year, we’re kicking off the ‘Big Game Big Flavor’ promotion on Jan. 20, to support retailers and highlight our 13-ounce dressings,” says Balfanz. “The promotion will be supported by online and offline initiatives, including a consumer sweepstakes for a chance to win a 65-inch flat screen television.” 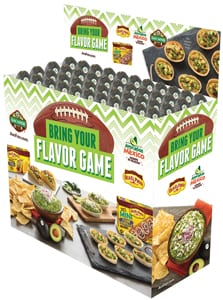 Balfanz notes that Super Bowl parties bring families and friends together for food and drink, and that the home party trend — “homegating” — is focused on meals and snacks for everyone in the family. But retailers shouldn’t forget there are better-for-you options to offer consumers.

“Some trending alternatives include roasted cauliflower Buffalo wings — a veggie-friendly substitute for chicken wings; protein packed meatballs, perfect in a bowl or on a sandwich; or broccoli slaw mixes that can be paired with burgers, used as a salad base or enjoyed as a side,” she says.

Shafer says the growing health trend is making headway into the world of sports fans.

“We’ve seen that consumers are looking for interesting alternatives for snacking that are healthier than what is traditionally used in tailgating or watching sports at home, and sugar snap peas fit right into this strong trend,” he says. “We offer them in an assortment of sizes to fit consumer usage.” Those include an organic 6-ounce package, along with 8-, 15-, 24-, and 32-ounce bags.

One healthy part of Super Bowl spreads for decades is the veggie platter, and there are lots of options in that space.

ADD THE TASTE OF SUMMER

Watermelon is a classic fruit for backyard barbecues, but it also can be part of your football party, according to Juliemar Rosado, director of retail operations and international marketing for the National Watermelon Promotion Board, headquartered in Winter Springs, FL.

She says the board offers lots of tips and advice on how to showcase watermelons as a way to freshen up a tailgate or “homegate” party throughout football season.

“For example, you can serve a watermelon crunch salsa for your next big game night,” she says. “Or make a meal out of it — layer it onto a grilled cheese sandwich, mix with quinoa or add a twist to a traditional gazpacho.”

Watermelon also offers itself up to fun promotional displays.

“If you’re feeling creative, you can make a watermelon football or helmet carving as you sample fall recipes in your store,” she says. “Watermelons lend themselves to many flavors, cuisines and meal types. There are many recipes available that incorporate watermelon. Sampling a recipe and having the items used together and available for purchase in close proximity would give a customer the opportunity to taste something and, if they liked it, the convenience of having the items at their fingertips to buy.”

HEALTHY OPTIONS FOR THE BIG GAME

Although nutrition and counting calories aren’t a big part of Super Bowl Sunday, part of your promotions should focus on fruits and veggies as healthy alternatives to the usual football fare.

Even snacks are making their way into the produce section. World Peas’ Peatos snacks promise junk-food taste with plant-based nutrition. With a name that plays on Cheetos and a tiger logo, Peatos is the brainchild of Nick Desai, chairman and chief executive of Los Angeles-based World Peas.

Desai grew up in America and often visited family in India. In the states, he’d eat the usual potato- and corn-based cheesy snacks, but le in India, he ate snacks made from peas and lentils. He found them delicious, and notes peas and lentils aren’t used in snacks in India because they are healthy, but because they’re cheap.

Peatos are available in four flavors — classic cheese, chili cheese, and vegan flavors fiery hot and masala desai. The products were launched last year in Southern California, went wide in March, and since May, they’ve been featured in produce sections in Kroger stores. They also are available in Walmart produce sections in the Northeast, in Northern California Safeway stores, and many other locations.

Desai says the focus is on flavor and embracing Peatos as junk food but notes they are high in protein, fiber and are non-GMO, with no artificial flavors, synthetic colors or MSG.
And a big promotion is coming in time for Super Bowl. Peatos will be featured on Dr. Oz in November, and January will offer a buy-two, get-one free option. Desai says the snacks will be in 1,000 more stores before the Big Game.

“We’re going after a very broad audience because they have such a broad appeal,” he says. “When we have Peatos in the store, there are kids who love them and grandparents who say, ‘This is amazing.’ ”

Dutra notes that Natural Grocers’ customers are looking for healthy spins on their favorite foods. Another growing segment is variations of classics that people with food restrictions, or who are on specific diets, can enjoy.

“Last year, for example, we featured a Vegan Loaded Nachos with BBQ ‘Pulled Pork’ recipe that was a major hit among our social media fans,” says Dutra. She adds that shoppers stock up on bell peppers, carrots, celery, broccoli, cherry and grape tomatoes and cucumbers for crudité platters or other dip options.

Although promoting the health benefits of fruits and vegetables is a key to boosting sales in the produce department, Super Bowl promotions also should focus on taste and convenience.

“Most tailgaters are not necessarily thinking about healthy food when planning a tailgate party, but more and more are realizing that all the pre-game fun can still be had without breaking the calorie bank,” says Shafer. “Healthy and fresh-snacking options have never been more popular, and this trend translates to tailgating, as well.”

It all comes down to planning a winning strategy that can lead to championship-level sales.