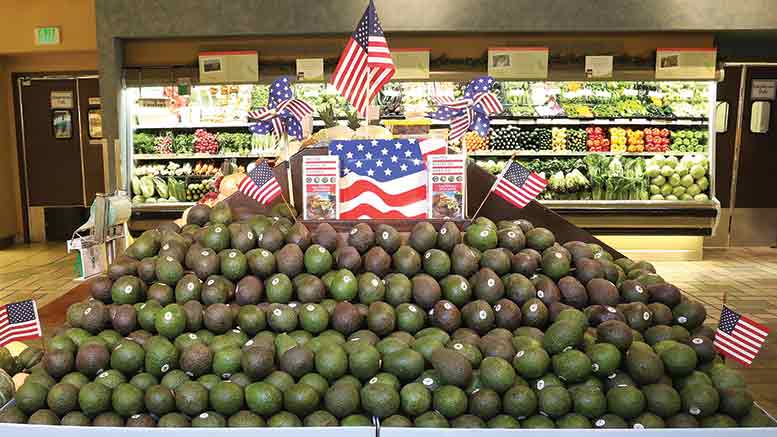 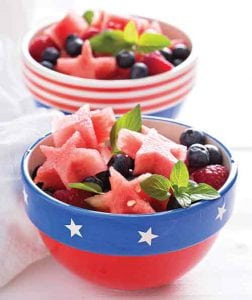 No other season of the year boasts such a singular promotional theme from start to finish as does the summer. That is, grilling. In fact, 75 percent of Americans grill on Memorial Day, 55 percent on Father’s Day, 87 percent on the Fourth of July and 74 percent on Labor Day, according to the most recent Weber GrillWatch Survey, published in 2016 by the Palatine, IL-headquartered Weber-Stephen Products Co.

At the same time, there is no one fruit or vegetable category that peaks during every one of these three major summer holidays. Rather, there is an ever-changing parade of fresh produce available nationally, regionally and locally. One simple theme coupled with many categories means the potential for hot, hot, hot produce sales in the summer.

“Produce sales in the summer are very holiday-based, with a 10 to 25 percent increase in the two to three weeks leading up to the holiday on specific items,” says Robert Schueller, director of public relations for Melissa’s/World Variety Produce, in Los Angeles.

“To capture this, offer attractive pricing to encourage customers to buy. After all, they aren’t just going to buy for the holiday but for the rest of the season too and this starts them in the habit. Customized signage is a big pull, especially when it calls out a loss leader item like sweet corn at 2 to 3 ears for $1. Recipes are basket-builders.

“For example, if tomatoes are on promotion, then cross merchandise with other ingredients for salsa like chilies, garlic and cilantro that aren’t on ad to increase the overall basket size,” says Schueller.

The May 28 holiday launches berry sales and summer grilling in a big way at B&R Stores, an 18-store chain based in Lincoln, NE, that operates under the Russ’s Markets, Super Saver, Apple Market and Save Best Foods banners.

“We’ll expand the size of the berry display and move it forward as part of our summer reset in May,” says Randy Bohaty, produce director. “At the same time, sweet corn also begins in a big way for the start of grilling season.”

The peak season for fresh berries is summertime, when all berry types are readily available, says Cindy Jewell, vice president of marketing for California Giant Berry Farms, in Watsonville, CA. “Not only are people celebrating traditional holidays such as Memorial Day, but also occasions like weddings. The key for our retail partners is to make sure berries are displayed together and at the front of the produce department to keep product moving and draw customers in. Provide suggestions right on the price card on usage and seasonality; tell a story with the price. Feature larger pack (2- and 4-pound containers) specifically for holiday parties and barbecues as crowd pleasers.”

Blueberries are ideal to provide the blue in patriotic recipes for Memorial Day recipes, according to Mark Villata, executive director of the U.S. Highbush Blueberry Council, in Folsom, CA. “Blueberries are eye-catching and versatile, making them an ideal product to feature in demo’d recipes like salads, smoothies and barbecue dishes.”

“Not only are people celebrating traditional holidays such as Memorial Day, but also occasions like weddings. The key for our retail partners is to make sure berries are displayed together and at the front of the produce department to keep product moving and draw customers in.” 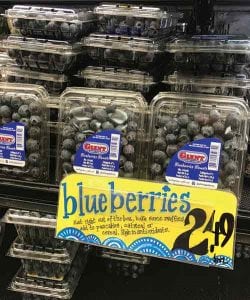 Present consumers with a one-stop area for various supplies, adds Villata, pairing blueberries with other summer activity staples and food items. These include snack-sized plasticware for on-the-go snacking; Mason jars for making jam and chutney; popsicle molds for homemade fruit pops; and grilling and outdoor dining supplies to inspire cookouts.

“Memorial Day is the traditional kickoff to sweet corn season in much of the country,” says Scott McDulin, vice president of marketing and retail sales for Schmieding Produce, in Springdale, AR. “Bi-color is the best-seller, with yellow a distant second and white only about 10 percent. Bulk is king; customers enjoy the experience of shucking in-store. However, tray pack has grown, and this season we introduce a new 4-pack at the request of our retailers.”

Beyond berries and corn, asparagus is a big seller for Memorial Day in the upper Midwest.

Apron-clad Dad standing at the grill tongs in hand is the quintessential Father’s Day image. Capitalize on this by cross merchandising fruits and vegetables such as corn, potatoes, onion and peppers as well as out-of-the box selections such as bananas and pineapple in the meat department. Also, spotlight Dad’s role with a family-friendly promotional theme. A good example is Dole’s collaboration with the Walt Disney Company called ‘Powering the Hero Within,’ a yearlong campaign that aims to empower parents and other everyday heroes involved in the daily battle to make better food choices for their families.

“Dole’s ‘Powering the Hero Within’ continues with a five-month summer campaign inspired by Disney Pixar’s The Incredibles 2, in theaters on June 15 (Father’s Day is June 17),” says Bil Goldfield, director of corporate communications for the Westlake Village, CA-based Dole Food Company.

“The family-focused Incredibles campaign will honor the biggest superheroes of all – the moms, dads, grandparents, teachers and others committed to making the home a healthier place. The program features a host of quick and easy recipes developed by the Dole Nutrition Institute (DNI), plus Incredibles-branded DOLE fresh products, digital activities, social media and public relations campaigns, all designed to boost fruit and vegetable consumption during summer months. Retailers can take advantage of this Incredibles 2-inspired summer program through themed displays, promotions and leveraging Dole’s character-inspired fruit and vegetable recipes.”

Cherries and watermelon are among the top produce items promoted for the Fourth of July holiday at Tops Markets, a 169-store chain headquartered in Williamsville, NY.

“Vidalia onions, Portabella mushrooms, bell peppers, sweet corn and even pineapple and soft fruit like peaches are fruits and vegetables we’ll work into total store grilling ads for the Fourth as well as throughout the summer,” says Jeff Cady, director of produce and floral.

Summer is everything for Northwest cherries, which are on an upward volume and awareness trajectory during the Fourth of July, according to James Michael, vice president of marketing for North America, for the Northwest Cherry Growers & Washington State Fruit Commission, in Yakima, WA.

“Cherries are the No. 1 dollar per square-foot item in the produce department in July. Beyond that, several Nielsen Perishables Group studies have shown a correlation between increasing cherry shelf space and increasing sales dollars,” he says.

Michael offers three additional tips to maximize sales of cherries on holidays and every day during the season. First, employ secondary displays not only in the produce department but also outside. Studies show the boost in sales far exceeds any concerns over shrink. Secondly, the top criteria for purchasing cherries is taste and flavor, even more than price. Demo and boost impulse sales. Third, since cherries are one of the few seasonal fruits in the produce department, call out their availability in ads and in-store.

Seedless watermelon drives produce sales during summer holidays such as the Fourth of July, says Jamie Vosejpka, category manager for melons at Robinson Fresh, in Eden Prairie, MN. “A high percentage of a retailer’s melon sales come during the summer months, for both whole and fresh-cut. Melons represent 36 percent of fresh-cut fruit sales, ranking the No. 1 category for fresh-cut fruit, according to 2018 IRI data.

“For whole melons, there is a great opportunity for retailers to offer consumers seasonal varieties. Mini watermelons are especially successful in the summer. New varieties in East Coast cantaloupes are also showing success on the retail level.”

Regarding promotions, adds Vosejpka, “It is all about creating excitement. We have worked with retailers to break a Guinness Book of World Record, encouraged in-store demonstrations so consumers can try what they will bring home and even brought in the Watermelon Queen as part of the National Watermelon Promotion Board.”

How to select the best product and health information are the two top points consumers want to see displayed in the store for watermelons, especially in the summer, according to Juliemar Rosado, director of retail operations and international marketing for the NWPB, based in Winter Springs, FL. “We offer many educational tools and point-of-sale materials to retailers.”

Frieda’s Specialty Produce offers a variety melon program that ties in well with the Fourth of July and all summer holidays, according to Alex Jackson Berkley, assistant sales manager at the Los Alamitos, CA-based company. “This year, our organic melon program will tie in well with our conventional offerings. We offer everything from yellow watermelon to orange honeydew, Temptation melons, organic cantaloupe, organic mini melons and organic variety melons.”

“For whole melons, there is a great opportunity for retailers to offer consumers seasonal varieties. Mini watermelons are especially successful in the summer. New varieties in East Coast cantaloupes are also showing success on the retail level.” 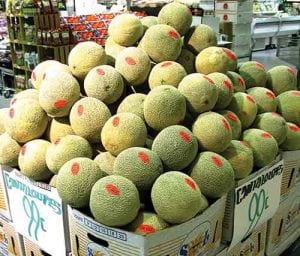 One out-of-the-box fruit to promote for the Fourth of July is avocados. In 2016, this holiday took over from the Super Bowl as the largest avocado dollar week of the year, according to data provided by the Mission Viejo, CA-headquartered Hass Avocado Board.

“American summer holidays, anchored by Memorial Day, the Fourth of July and Labor Day are key opportunities for themed merchandising,” says Jan DeLyser, vice president of marketing for the California Avocado Commission (CAC), in Irvine, CA. “This period coincides with peak availability of California avocados, so the Commission puts considerable retail promotion behind those holidays resulting in wonderful displays built by creative produce teams and increased sales. In addition, the CAC has recipes that pair California avocados with many different summer items, even watermelon, and these pairings spark interest with shoppers.” 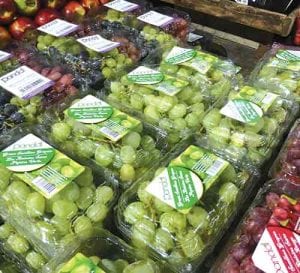 The Sept. 3 holiday is the last hurrah for summer produce, says Tops Markets’ Cady. “We lower prices even more because summer fatigue for items like sweet corn is setting in, and we want customers to be interested and engaged. After Labor Day, it’s all about back-to-school and fruit like apples.”

As summer winds down, California grapes are ramping up, with 65 percent of the crop shipped after August 31, says Jeff Cardinale, vice president of communications for the Fresno, CA-headquartered California Table Grape Commission. “Retailers should target an average of at least 30 square feet of space devoted to grapes during September through December. Space allocation of more than 30 feet can generate up to 29 percent more dollars per store per year than sets under 20 feet.”

Tap into back-to-school, the second largest shopping time of the year behind Christmas, to promote grapes as an easy snack for kids with in-store secondary displays, suggests Andy Kampa, grape commodity manager for Robinson Fresh. “We rolled out secondary display bins this year and bi-color, 2-pound, fixed-weight bags. There is strong availability at this time for all three seedless grape colors and some of the newer varieties, this combined with a great eating experience lends itself to a higher potential for repeat business from customers.”