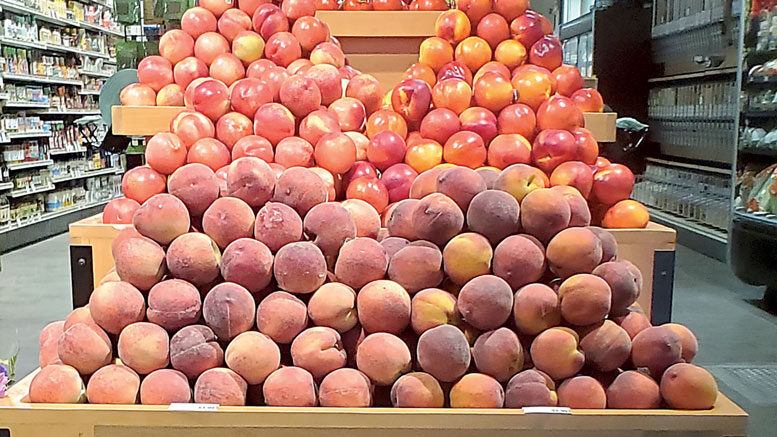 Given the attraction as a key seasonal fruit and their relative perishability, peaches can drive volume to benefit the entire produce department.
PHOTO COURTESY HOMEGROWN ORGANIC FARMS

Even when summer wanes, retailers can still satisfy consumers who love peaches.

Peaches are a seasonal star in the produce section, but change is afoot in their growing and retailing due to innovations and market changes.

The retail market for peaches is changing, as some food retailers are emphasizing uniformity in quality and size. And similar size and count per pound provides greater consistency appreciated by consumers ordering online.

Yet, a countercurrent exists, exemplified by the demand for local fruit in and around major growing areas. In some cases, that has even encouraged peach growers to go direct to consumers via physical stores and stands, or digital sales. Although not any real threat to traditional retail sales, the move by growers to sell direct to consumers who believe the best way to get fresh, flavorful fruit is through the farm itself suggests that consumers will reward whoever sells peaches and other fruit that provides the best eating experience.

Melick’s Town Farm is a New Jersey-based grower, as well as farm-based retailer and agrotourism participant. Today, Melick’s operates the Oldwick and the Bridgewater Farm Market, and sells its own-grown fruits and vegetables, as well as other products. The Califon Orchards is where Melicks offers consumers peach picking, with over 30 varieties available.

Peter Melick, co-owner of Melick’s Town Farms, headquartered in Oldwick, NJ, says consumers in its portion of the Garden State wanted to shop differently for produce during the pandemic, and Melick’s complied by keeping its seasonal, open-air, retail business open longer than usual.

Melick says retailers he knows have become more concerned with centralized purchasing and distribution and less ready to pull directly from local growers. In that case, the growers can step in and serve consumers who want a taste of the country, and its fruits.

Titan Farms, Ridge Spring, SC, a major eastern U.S. peach grower and shipper, is pursuing the shipped fruit business, and to get involved with agritourism, according to Chalmers Carr III, owner, president, and chief executive of Titan Farms. “It’s our No. 1 initiative. We’re going to do tours for a couple of years, then you pick it.”

Still, grocery retailers satisfy the bulk of consumers who love peaches even when summer wanes.

On the East Coast, some cold weather affected, but didn’t undermine, the peach crop. Carr expects 60% to 65% of the normal crop would ship, and in New Jersey, Melick says growers would have about 75% of a full crop.

Carr says his early fruit was a bit small, but good quality. His mid- and the later-season varieties run from July to September. South Carolina is the second largest producer of peaches after California and before Georgia.

Out west, Courtney Razor, director of member services & communications, California Fresh Fruit Association, says peach season in California typically runs from June to September. “Overall, what we are hearing is that production is a little down from the past few years.”

At Homegrown Organic Farms, a grower-shipper based in Porterville, CA, Stephen Paul, category director, says peach season at HGO began in mid-May, but has been extended by varietal developments and practices so it now goes through mid-September. He says from mid-June to mid-August, HGO will deliver some of its peak peaches to customers across the United States.

But, Paul adds, California’s drought is another challenge that affects the market, which has been compounded by the political landscape and poor water management. Without regulations that ensure groundwater recharges, the challenge to growers, particularly small farmers, is going to just get greater.
The season opened up nicely for Wawona, Cutler, CA, where the peach operations proceed from April to the end of October. It is about eight days ahead of schedule and by June, as is typical, size improved and brix was expected to continue “very good,” says George Papangellin, Wawona director of sales strategy & systems.

Retailers may want to get more aggressive in presentation. Given the attraction as a key seasonal fruit and their relative perishability, peaches can drive volume to benefit the entire produce department. High profile displays can generate incremental sales, as not every shopping list includes peaches, but produce department visitors can’t miss the aroma and, so, the temptation of fresh peaches.

This spring, Adam Shapiro, owner of the Green Way Markets in Maplewood, NJ, took space near the store entrance to feature peaches as they came into season. “Peaches, plums, nectarines, we use a table as a fixture, and make the whole upfront that,” he says.

“This is a seasonal, perishable item,” Carr adds. “We’re generally an impulse buy. Peaches smell good, they look good. That aroma is there.”

High-profile peach displays signal the beginning of summer and all that entails, which includes seasonal produce, says Lisa Davis Corrigan, Wawona’s director of marketing. “Consumers like the mix and seasonality of fruits and veggies,” Corrigan says. “They tend to look forward to summer for the variety of sweet fruits and vegetables.”

Titan Farms’ Carr is concerned about retail labor shortages will affect peaches more than most other fruits and vegetables. Because peaches are more perishable than many other produce items, and because their color and aroma drive purchases, keeping displays well maintained, including the rotation out of product that’s past prime, is critical for peaches. Poorly maintained peach displays are also bound to suffer considerable shrink, which always invites scrutiny.

“The workforce has changed,” Carr says. “The people in stores who work the displays have to remove the bad peach or bananas or the company is going to see shrink.”

Carr is an advocate of cross-merchandising to drive sales, particularly with market baking sections. He says a cross-merchandising promotion that paired Titan peaches with Driscoll raspberries was a significant success and wound up with the retailer involved running out of peaches.

Organic peaches, and organics in general, deserve the showroom effect, Homegrown Organic Farms’ Paul says. Retailers should create dedicated organic produce presentations to feature their assortment in the category, and to enhance the customer experience.

“Organic has to have its own area as part of the larger produce display,” he says. “We’re asking people to pay a premium. And they don’t want to have to move all around, shopping from one side of the produce section to the other.”

Corrigan says Wawona, which offers the Prima brand, wants peach displays to draw attention, but also to convey health benefits and provide preparation ideas. The company, she says, has seen demand for new, creative recipes and other prep inspiration.

“Merchandising displays such as using our branded bins help the consumers see the fruit immediately,” Corrigan says. “Our marketing materials are eye-catching to entice the consumer, but provide health benefits. We also offer usage ideas for our consumers so they can go beyond the cobbler and into salads, grilled, smoothies and in a lunch box. There is so much more we can use stone fruit for.”

Peach sales can get a lift with properly maintained secondary displays, and retailers will get a pay off by cross-merchandising.

“Secondary displays are always important especially if merchandised as a cross-promotion or to offer usage ideas. I would like to see stone fruit merchandised beyond the produce department, like in the baking, cereal and yogurt aisles,” says Corrigan.

Many in the peach sector will say keeping merchandise efforts strong through the summer and past Labor Day can benefit retailers. Wawona is among the operators that urge retailers to run peaches into the beginning of fall.

Lundblad notes the New Jersey’s peach season ends in mid-September, but that a sales drop-off begins around Labor Day. That can be the time for retailers to consider price promotions to keep sales going and to get the maximum benefit from peach season.

“PPC generally puts out information via press releases, Facebook and websites for Jersey Peaches and Jersey Fresh that peaches are still in season and delicious,” she says.

On a market exclusive basis, Titan offers the Lori Anne peaches, which is a peach the company describes as having a taste like no other. Rochester, NY-based Food Markets has a page devoted to the fruit on its website, picturing Carr and his wife Lori Anne, where the variety is characterized as “sweet, juicy and fragrant.” A video touts the Lori Anne peach as a Wegmans’ exclusive and characterizes it as “the perfect blend of sweetness and that little twang of tartness you only find in tree-ripened peaches.”

Wegmans spokesperson Laura Camera says the Lori Anne peaches arrived in stores in late June, “and we let our customers know through digital tactics and in-store displays and signage.”

New peach varieties coming out of breeding programs are a plus for the peach sector and growers, given consolidation in the nursery business, which affects royalty fees, according to Stephen Paul, category director, Homegrown Organic Farms, Porterville, CA.

And when it comes to new varieties that may be less familiar to consumers, Wawona, Cutler, CA, works with retailers to ensure they understand the advantages.

“As we have new varieties come on line, we work with the retail teams to inform and educate them on best handling practices and suggest points of differentiation for great sales results,” says George Papangellin, Wawona director of sales strategy & systems.

Some programs that developed peach varieties have gone by the wayside, but Chalmers Carr III, owner, president and chief executive of Titan Farms, Ridge Spring, SC, says they are seeing a revival including, in South Carolina, at Clemson University.

Whether the term is corporate or agricultural, varieties are important. Carr indicates that several exceptional varieties of peach have emerged from South Carolina breeding and that breeding in California is leading to interesting variations as well.

Carr also points to Florida, which has been developing low-chill varieties, as another example of advances that will help the peach sector in general. The Florida peaches eat well, he says, but aren’t necessarily large, and are sometimes known as ‘Florida babies.’