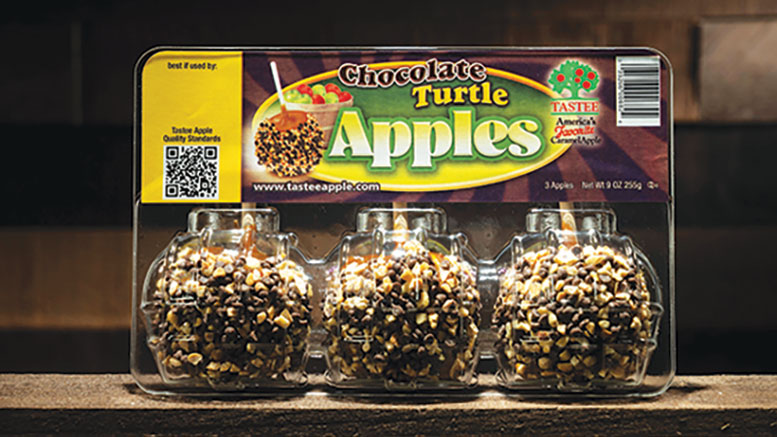 There’s nothing like the nostalgic ooey-gooey goodness of biting into a caramel apple in the fall. First invented in the 1950s, crunchy fresh harvested apples covered with sweet soft caramel and skewered on a stick for easy eating are staples in produce departments nationwide from late August through the end of October. Now, Tastee Apple, Inc., a Newcomerstown, OH-headquartered company that has been making these seasonal staples since the early 1970s, has employed trendsetting bioprotective technology to assure this long-time treat is as safe to eat as it is scrumptious.

“Caramel apples are an inexpensive comfort item that shoppers have come to expect, and seek out, during the 10-week window leading up to Halloween,” says Chad Hackenbracht, Tastee Apple’s vice president of production. “However, once the caramel is applied to the apple, it can create a place under the caramel where bacteria can grow. Now we have a process that not only prevents bacteria from growing but can do so without refrigeration.”

In 2014 an outbreak of Listeriosis in the U.S. was linked to caramel apples. This came as a surprise to the fresh fruit and confectionery industry. Until then, it was widely accepted that bacteria wouldn’t grow on apples because of their high acidity, and it wouldn’t grow on caramel because of its low water activity. But after the outbreak, researchers discovered a region between the caramel and apple capable of supporting microbial growth. Caramel is hygroscopic and traps moisture, in this case the water vapor from the respiration of the apple and also the liquid migrating through the stick. Apples contaminated with Listeria monocytogenes, in combination with caramel and moisture, was the cause of the outbreak.

The immediate response was to mitigate the risk by refrigerating the apples, where microbial growth was greatly inhibited by the cold. Since 2014, most retailers have kept this product in a cooler, a significant challenge for such a high-velocity and seasonal item.

Is there a better solution? Tastee Apple teamed up with Chr Hansen, a Denmark-headquartered global bioscience leader, to devise a bioprotective treatment specific to caramel apples. That work resulted in a treatment that employs four species of lactic acid bacteria (LAB), or ‘good’ bacteria found naturally in many foods, to fight bad bacteria. The process involves a saturated application of LAB directly to the apples after sanitation and disinfection and just before processing. The LAB are a natural, GRAS and Kosher certified food additive that appears simply as ‘cultures’ on the ingredient declaration. Unlike a one-time zap of gases, chemicals or irradiation, LAB is natural and provides anti-microbial protection throughout the entire shelf life of the caramel apple, and it does so without refrigeration. Tastee Apple has proved its process in real world production conditions.

“The keys to this bioprotective process are that the protection is ongoing and continues to kill any bad bacteria that may survive the antimicrobial treatment, plus it doesn’t change the apple’s taste or texture, and it does all this without refrigeration. This gives retailers more options of where to display caramel apples in the produce department and to cross-merchandise them throughout the store. In fact, we worked with one retailer last year who displayed our product off refrigeration, and they saw a tremendous boost in sales. Caramel apples are an impulse item. The greater visibility the greater the sales,” says Hackenbracht.