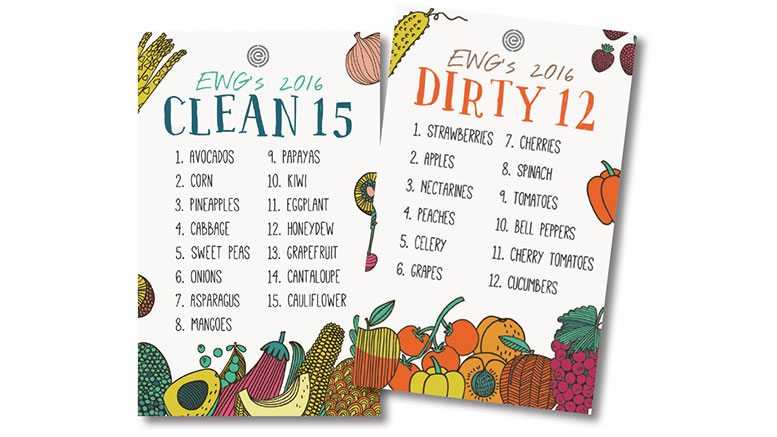 Are the crops named by EWG particularly prone to pests, warranting increased pesticide use and residues? “The fruit crops on the list are susceptible to a wide range of diseases and insect pests, and several of the vegetable crops (like tomatoes and cherry tomatoes) are susceptible to diseases which spread rapidly and kill infected plants quickly,” explains Andy Fellenz, organic fruit and vegetable coordinator, Northeast Organic Farming Association of New York, Inc. (NOFA-NY) in Farmington, NY. “Consumers have extremely high standards for appearance. These high appearance standards, combined with quick spread of disease, can lead to a prophylactic approach to pest and disease management and a relatively high rate of pesticide use.”

The U.S. Department of Agriculture (USDA) and Food and Drug Administration (FDA) monitor and guide the safety of fruits and vegetables in the U.S. The USDA’s AMS Monitoring Programs Division directs and oversees the Pesticide Data Program (PDP) database; PDP works with the Environmental Protection Agency (EPA) to monitor pesticide residue levels in foods to ensure they are at safe levels and to set limits on the amount of pesticides that may remain in or on foods marketed in the U.S. In the most recent USDA’s Summary, more than four in 10 samples had no detectable residues and nearly all of the items tested by the USDA were below the EPA tolerances.

“Reporters and bloggers should read the actual USDA report that EWG states it uses to develop its list before they cover the ‘Dirty Dozen’ release,” says Marilyn Dolan, executive director for the Alliance for Food and Farming (AFF) in Watsonville, CA. “USDA findings show ‘residues do not pose a safety concern.’”

In contrast, bacterial contamination from bacteria during growing and processing poses a greater risk. The new FDA Food Safety Modernization Act (FSMA) establishes science-based minimum standards for the safe growing, harvesting, packing, and holding of fruits and vegetables grown for human consumption to minimize contamination that could cause serious adverse health consequences or death. FDA also provides safety guidance for the fresh-cut sector of the produce industry, and introduces measures to reduce risk of bacterial growth and contamination.

The EWG’s list has been discredited by most in the scientific community. A 2011 analysis of the “Dirty Dozen” by UC Davis scientists concluded the EWG’s methodology was flawed. Using USDA’s PDP data to estimate exposures to the most frequently detected pesticide residues, the scientists found that all pesticide exposure estimates were well below established maximums. They concluded that the most commonly detected pesticides pose negligible risks to consumers and that EWG’s methodology lacks scientific credibility.

“The report also found that EWG’s recommendation to substitute organic forms of produce for conventional forms does not result in a decrease in risk because residue levels are so minute, if present at all, on conventionally grown fruits and vegetables,” says Dolan.

“Anyone who reads USDA’s analysis of pesticide residues knows that EWG’s ‘Dirty Dozen’ is a bogus PR stunt not based on science,” says Tom Stenzel, president and chief executive, United Fresh Produce Association, Washington, D.C. “EWG doesn’t let facts from the USDA get in the way of trying to scare consumers about pesticides that are a critical part of our ability to grow safe and healthy fruits and vegetables. If EWG really cared about consumer health, they would encourage people to make half their plate fruits and vegetables, and not worry about extremely low level of residues that EPA deems safe.”

Although strawberries hold the top position, “this is not really about strawberries,” says Cindy Jewell, marketing vice president, California Giant Berry Farms in Watsonville, CA. “The analysis and report published by the EWG takes an official government report and manipulates the data to develop a secondary report that is not verified or approved by USDA. It is also important to note the most recent USDA report includes strawberry samples for the first time, even though strawberries have been in the ‘Dirty Dozen’ every year (without government data).”

The California Strawberry Commission notes that EWG issues contradictory statements about strawberries, highlighting them at the top of the “Dirty Dozen” list while naming conventionally grown strawberries as a “best food” in the  2014 Summary.

AFF adamantly opposes the “fear-based marketing” employed by EWG. “It may be undermining efforts by health officials everywhere to increase consumption of fruits and vegetables,” says Dolan. “A study conducted by the John Hopkins Center for a Livable Futurethat found conflicting messaging on food safety and nutrition may detrimentally impact the dietary choices of consumers, especially those with lower incomes.

“We aren’t surprised that EWG has a new No. 1 this year,” says Dolan. “Media coverage of the ‘Dirty Dozen’ has fallen dramatically in the past five years. We knew that the new No. 1 would be a popular fruit and favorite among children, because this is an EWG prerequisite for a No. 1 placement.”

Cal Giant’s Jewell has similar concerns. “EWG receives a huge percentage of its income from consumer donations. In order to attract funding, they need a compelling hook — 90 percent of Americans eat strawberries, so being on the top of the list gets them more publicity than less popular items.”

AFF points out that any residues present are in such small amounts that children could eat hundreds or thousands of servings without any adverse impact. A risk calculator on AFF’s website, safefruitsandveggies.com, estimates that “a child could eat 1,508 servings of strawberries in a day and still not have any effects from pesticide residues,” says Dolan.

“Dirty Dozen” headlines do not appear to harm the industry, however. “We believe many in the media have come to understand it’s a farce and don’t cover it as real news,” says United Fruit’s Stenzel.

“It has not affected our sales,” says Jewell. “If anything, it provides the opportunity to have a conversation with concerned consumers about why fresh is a good thing.”

Uniting Behind The Fruit And Vegetable Message

“The message we should all be promoting to consumers is that a diet rich in fruits and veggies, whether conventional or organic, leads to better health and a longer life,” says Dolan. “Consumers deserve truthful, credible information about the safety of their foods so they can make the right shopping choices for their families. Not only is the ‘Dirty Dozen’ list significantly scientifically flawed, it is also just bad advice.”

Fellenz of NOFA-NY notes that eating organic is safe. “A core tenet of the National Organic Program is a holistic Integrated Pest Management approach to pest and disease management,” he says. “If you wish to avoid the possibility of your fruits or vegetables having any synthetic pesticide residues, purchase certified organic fruits and vegetables.”

“At California Giant, we expanded our organic operation to address the demand of those consumers preferring organic,” notes Jewell. “This has also resulted in the use of more organic methods in our conventional fields to further help our farmers reduce the need for and cost of synthetic materials and improve overall health of the plants and fruit.”

Jewell adds that “strawberries, along with all of the items on the ‘Dirty Dozen’ list,  are good for you, whether conventional or organic. The choice is personal, and sometimes economic.”

In her article on foodinsight.org, Elizabeth Held, director, White House Writers Group, Washington, D.C., notes “whether you choose organic or traditionally produced fruit and vegetables, the important thing is to get plenty of servings each day and to handle all food safely to prevent foodborne illness.” The FDA advises consumers to wash their fruits and vegetables to reduce and often eliminate residues, if they are present at all, as well as reduce contamination.

“We all need to work together to increase consumption of fresh fruits and vegetables,” says Jewell. “As a nation, we are not eating enough fresh food to help prevent obesity, diabetes, heart disease, and other diseases. These major health issues are not created by conventionally grown produce; they are created by poor diets, fast food, processed foods, and not enough activity in our lives.”

“The best recommendation is to eat more of both organic and conventional produce — whatever is affordable and accessible for you and your family is the right choice. The only ‘list’ you really need is your own shopping list,” says Dolan.