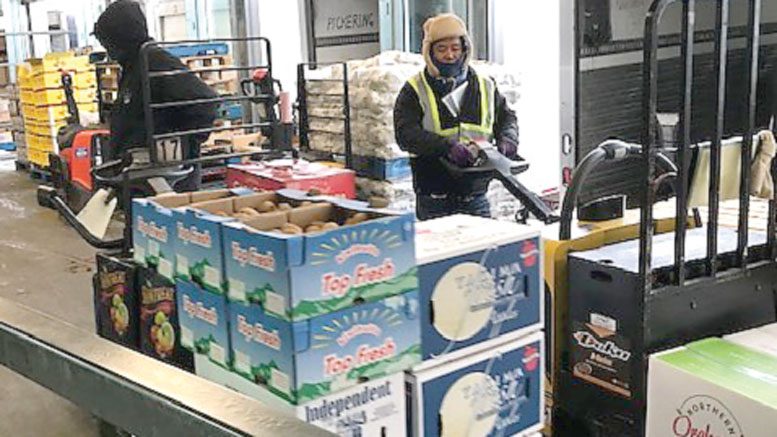 The prosperity and diversity of the Greater Toronto Area encourage produce consumption and exploration.

Toronto’s multicultural identity supports a diverse and thriving food culture. “We’re a world class city with a diverse metro area,” says Ezio Bondi, vice president of Bondi Produce. “Toronto is definitely a city very driven by trends and variety due to its diversity.”

The city’s unique demographics give it a continuously evolving food environment. “The landscape changes every few years and, with it, the market requirements,” says Danny Simone, manager at Stronach & Sons. “For example, items such as methi leaf… years ago, we never even had it, and now it’s a big item.”

The diversity of the population has promoted a sharing of information across the different cultures, explains Christian Sarraino, chief procurement officer at Fresh Taste Produce Limited. “With such a diverse marketplace, we see ethnic products becoming more prominent,” he says. “Our population enjoys trying new things, so home cooked meals and the exploration of culinary arts is alive and well.”

The Greater Toronto Area (GTA) houses 6.3 million people (in 2018) with more than 51.4% of the population reported as a visible minority, according to City of Toronto statistics. The city has established ethnic neighborhoods, including multiple Chinatowns, Corso Italia, Little Italy, Little India, Greektown, Koreatown, Little Jamaica, Little Portugal, and Roncesvalles.

The demographics of Toronto make it one of the most multicultural and multiracial cities in the world, states Hutch Morton, senior vice president at J.E. Russell Produce Ltd. “In my opinion, this is what truly makes the Ontario Food Terminal such a vibrant and important part of the community fabric,” he says. “We have so many different ethnic customers from every neighborhood in the Greater Toronto Area that we are able to sell many more varieties and categories than a more homogeneous city.”

Toronto is also a fairly prosperous region, boasting an average household income of $104,378 (Canadian dollars) in the GTA. “Toronto is a rather affluent community,” says Larry Davidson, president of North American Produce Buyers Ltd. “Statistically, Toronto has a high per capita consumption of produce. There is such an eclectic mix of consumers in our region, you can pretty much find and sell any produce you can think of.”

Toronto’s variety of produce is evidenced by its many retail formats. “The retail environment consists of huge companies, such as Loblaws all the way down to family corner stores,” says Simone. “There is a lot of small corner stores in our market, as well.”

Davidson reports Toronto has three mainline publicly traded national retailers — Loblaw, Sobeys and Metro. “Costco and Walmart have strong positions here, too,” he says. “But the unique thing about this market is how, outside of those big chains, there are many independents making up the backbone of the market. We have independent chains such as Longo’s, Highland Farms and Farm Boy as well as one- and two-store operators. This lends to different models and more unique experiences at retail.”

Big chain stores have recently been integrating into historical buildings to create unique shopping experiences for the consumer, explains Sarraino of Fresh Taste. Some are creating smaller city center footprints that are unique to the brand and space,” he says. “Toronto’s independent presence is still very alive and well, with multiple stores across the city having very strong consumer support. The independents provide quality and value in their respective spaces and help distinguish our cities’ personality.”

Toronto has more independents than any other city in Canada adds Morton.

Toronto’s thriving independent retailers base their business on customized service. “You have to find your target market and cater to them,” says Simone. “Our independent stores do that well and are open to learning. I had one customer who didn’t know what dandelion was, so I showed him and gave him a case. He was surprised at the high price but tried it. The next day he came back, thrilled it had all sold.”

Anthony Greco, owner Concord Food Centre in Thornhill, ON, believes the most successful stores are those that are passionate about produce. “Different markets have different demands, but merchandising properly, controlling displays and showing a priority for clean, neat layouts certainly tells a customer how you feel about them and the product you want them taking home to their families,” he says.

Bondi observes Toronto has a diverse mix of brands and formats in the market to cater to everyone. “I’ve always been amazed at [Brampton-based] Oceans and [Woodbridge-based] Nations in terms of how they’ve branded themselves to appeal to a wider demographic,” he says. “Eataly [in Yorkville] just opened in late 2019, as well, and they’ve added their own unique twist on things.”

Parallel to the variety of retail formats is Toronto’s diverse and ample foodservice sector. “Toronto is regarded as one of the best restaurant scenes in the world,” says Morton. “Many U.S. chefs and chefs from around the world have come to the city to set up new ventures. Most importantly, we have an incredible number of home grown Canadian chefs who are really making a name for themselves and this city on the global food stage.”

Toronto’s restaurant industry is a thriving and diverse sector. Restaurants Canada reports, in 2019, there were more than 9,000 restaurants, caterers and drinking places in Toronto, generating more than $7 billion in annual revenues. “With an internationally diverse population, Toronto’s foodservice industry offers flavors from around the world,” says Roberto Sarjoo, director of marketing and communications with Restaurants Canada in Toronto. “This has made Toronto recognized around the world for its vibrant foodservice scene. We also see many new restaurant chains from around the globe choose Toronto as their first foray into Canada.”

Toronto is a very food-forward city, according to Sarraino. “We have a strong food culture, with restaurants always keeping up to date with the most current food trends and dining styles while expressing interesting ways to elevate their dishes,” he says.

This world-class restaurant sector encompasses great diversity and is produce centric. “Our foodservice uses a lot of produce,” says Simone. “There is a lot of high-end restaurants and ethnic restaurants because of our diverse population. People here are willing to experiment with food, and produce plays a major role.”

Bondi reports a very loyal following of chefs due to their ability to source a wide range of specialty products. “We’re always trying to offer something new and exciting that will inspire our clients to make great food,” he says.