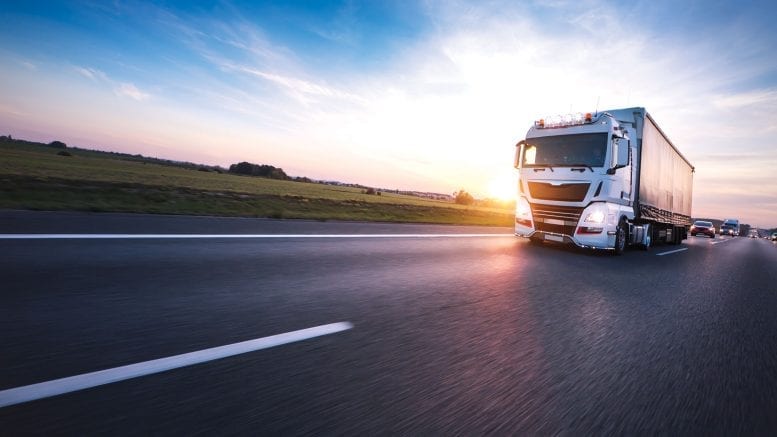 Regulations have brought greater consistency to a supply chain obsessed with transparency.

Fresh produce transportation markets were shaken up last year by rules requiring the use of electronic logging devices (ELD) on truck engines, forcing drivers to comply with strict hours of service (HOS).

The storm around the rules has largely subsided, but it has still left its mark on the behavior and practices associated with hauling perishables.

The actual regulations around hours of services did not change. Before ELDs, truckers were still supposed to only drive for up to 11 hours after 10 hours off duty, but paper logs offered a certain degree of flexibility.

“You could fudge on your times a little bit if it was paper,” says Kenny Lund, vice president of operations at Allen Lund Company in La Cañada Flintridge, CA. “Some people are mad at the ELDs when they’re really mad at the hours of service, which are problematic because they try to be one system that fits very fragmented, very different transportation systems that are out there.”

Take parking for example. A car can easily stop at any exit on the highway, but a truck can’t just set down anywhere; drivers might need a half-hour just to find a place where they can stop legally, and Lund notes some states have been shutting down rest stops because of budgetary issues.

Those 30 minutes can make all the difference on a long-haul trip, especially if the driver needs to make several stops and may need to wait for pick-ups that aren’t ready or offices that are still closed. These delays all eat into the 14 hours the trucker is allowed to be on duty.

Although enforcing regulations that prevent drivers from overworking and getting drowsy at the wheel makes sense, the unintended consequence may be that the strict system incentivizes more dangerous behavior.

Fred Plotsky, president of Cool Runnings in Kenosha, WI, claims truckers have been driving faster since the regulations were put in place, with speeding tickets up 13%.

“If a guy’s got to make up 600 miles and you cut into his drive time, he’s going to drive faster to make up for lost time,” says Plotsky. “The biggest downfall of this thing is speed — it’s up, it’s apparent. Just ask anybody who’s on the road.”

“These are human beings driving the trucks, not machines. At times, these devices force them to drive when they don’t want to, and sleep when they’re not ready,” says Kazan. “Ideally, I would like to see rules that say, you can drive X number of hours in a day, manage them as you see fit.”

Adapting To Change
Mark Petersen, vice president of temperature-controlled transportation at Eden Prairie, MN-based C.H. Robinson, says there is always a fear factor with change, but it is important to embrace technology, transform and reinvent the business to adapt.

“Based on all of this, the expectation is that utilization of ELDs and compliance with HOS is complied with — it’s integrated and it’s operating,” says Petersen. “We have seen little disruption.”

Kerry Byrne, president of Cincinnati-based Total Quality Logistics (TQL), says his company made sure its contracted carriers had access to a low-cost ELD option ahead of the mandate through a partnership with San Francisco-headquartered KeepTruckin.

“Shippers began to make changes to their own operations, facilities and policies to give carriers more flexibility and to be viewed as a more desirable location to pick up or deliver to,” he says. “The keys to keeping fresh produce or any time-sensitive commodity moving efficiently are optimizing loading processes, reducing excessive dwell times, and increasing lead times to carriers as much as possible.”

Time is of the essence when it comes to moving perishable fresh fruits and vegetables, and one way to get around that is teaming drivers to share the load.

“We have increased our use of team drivers for our produce loads,” says Kazan of Target Interstate Systems. “That, along with our use of trailer interchange and drop-and-hook operations, has helped with our load planning and transit times.

“Trucks are still quicker than intermodal, and drayage companies typically don’t do multiple pickups or drops,” he says. “The ELDs have made long-haul supply chain management more challenging than before, but we have been able to find an equilibrium and manage the challenges effectively.”

Byrne says team drivers can be an attractive option and they have been used for his company’s customers in many instances.

“Team drivers do tend to be at a higher rate than a single driver, but given our carrier network and volume of shipments, we do our due diligence to find the most cost-effective solution given our customers’ requirements,” says Byrne. “The cost of a team is almost always less than the potential cost of late fees, damaged customer relationships or lost business.”

Allen Lund Company saw a record number of new trucking companies join the group in 2018 because of the higher and more attractive prices brought about by the regulatory change, which took out capacity. Kenny Lund had thought there would be an increase in team drivers, as well, but says that hasn’t been the case.

“It’s mostly single drivers, and that’s because it’s more efficient — you can’t cover double the miles with two drivers, but you do double the cost,” says Lund. “Team drivers haven’t been the answer to it; it has been being more compliant, staying more professional, understanding the exemption, using the ELDs to your favor rather than cursing them and fighting against them.”

Exemptions Are Game-Changing
Lund refers to exemptions that are a critical piece of the puzzle, as a wide range of industries, including fresh produce, were vying for ways to cope with the new rules.

“In produce, there already was an exemption,” he says. “They needed the truckers, otherwise the product goes bad. So they gave an exemption of 150 miles to agriculture to be able to get product from the farms into the packing sheds or into the processing areas.

He says this means the ELD doesn’t need to be turned on until it’s 150 miles away from the packing shed where the product is being picked up.

“And so that was a huge game-changer,” he says. “If you figured out how to use that exemption, hauling produce actually got easier this last year.”

Lund notes, however, some trucking companies have been reluctant to use the exemption, because it could lead to a lot of hours straight on the road.

“Nobody wants somebody out on the road for 20 hours of straight driving; that’s not safe no matter whether you have an exemption or not,” he says. “So they’ve used that exemption sparingly, but it has made it a lot easier on the enforcement and to not be paying a lot of fines.”

Plotsky of Cool Runnings begs to differ with the idea that exemptions can help truckers, claiming it really only applies to growers.

“Our insurance said ‘your clock starts and there are no exemptions,’ ” he says. “If drivers are taking that exemption, in our insurance company’s opinion, then they’re cheating the system.”

Plotsky does note a positive from the ELDs —the efficiency of buyers who have “done a better job predicting.”

“It used to be they would order a load on a Monday and say they need it on Wednesday, but legally it can’t be there until Thursday. The shipper needed some lead time,” he says. “Buying patterns changed … and even those shippers had to figure it out, they just had to be a little quicker.”

Automation And Its Potential
Petersen of C.H. Robinson says the purpose of ELDs is to provide visibility of consistent HOS, but that is just one way data is shared for those interested in tracking the movement of perishables. Could the changes we’re seeing be the tip of the iceberg for the modernization of supply chains?

“Since ELDs only need to track total time, the next level of sharing is location, so that the amount of time on the road is paired with where a driver is on the road,” says Petersen. “Beyond tracking total time on the road, there are a number of automation advancements, from real-time location tracking and temperature monitoring to helping carriers and loads available be better matched.”

“The application of AI, machine learning and predictive analytics is to use data to avert issues you may encounter in the life of the order,” he says. “Unlike personal transportation, shippers tend to plan days in advance of their need for transportation. There’s a lot riding on freight getting to market on time.”

“Ultimately, utilizing data science helps to be more predictive and prescriptive,” he says. “We use the community of data to identify market shifts far ahead of others and help customers and carriers react and hedge against change.

“There is a balance in understanding when it’s appropriate to automate and how to maintain the quality of experience. It’s more noticeable on the smaller carrier size segment, much of which hauls temperature-controlled freight and specifically produce,” says Petersen.