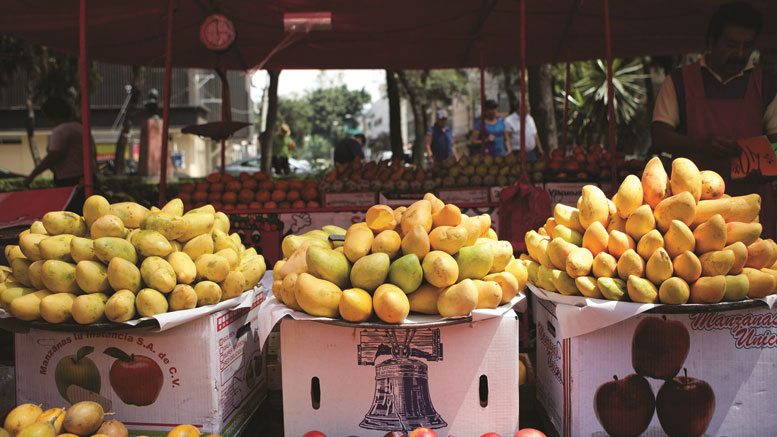 How education from the retail perspective translates to mango inspiration for consumers. 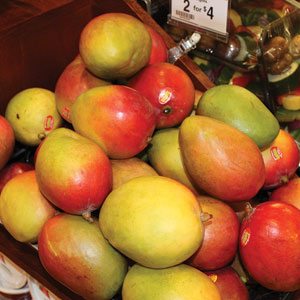 Mangos represent 40 percent of all tropical fruit sales, according to the National Mango Board, a research and promotion organization based in Orlando, FL. With more than 2,000 varieties, their popularity is on the rise, thanks in part to their nutritional value — a great source of vitamins C and E, niacin, potassium, iron and beta carotene — and their sweet taste.

Mangos are more affordable than many other exotic fruits — a selling point for shoppers, notes Harle. Thanks to the popularity of value-added products such as mango salsas and chutneys, people are becoming more familiar with them.

There are a few barriers holding back mango sales, however. “The customer still lacks knowledge of the product, even though sales have been steadily growing,” says Andres Ocampo, director of operations for HLB Specialties, a family owned tropical fruit importer headquartered in Pompano Beach, FL. In addition, many people are still uncertain about how to select, peel and cook with them.

Both of these barriers can be overcome by providing answers to common mango questions and helping shoppers discover their many attributes. Savvy merchandising and frequent sampling can provide a leg up here. “If you can get a good mango into someone’s mouth, they’re much more likely to buy one,” says John Savidan, produce director for Bristol Farms and Lazy Acres Market, a California chain of gourmet and organic markets operating 14 stores under its two banners and is headquartered in Carson, CA.

Most of the mangos sold in the United States come from Mexico, Peru, Ecuador, Brazil, Guatemala and Haiti; some come from Florida and California. Because of growing season variations in these countries, mangos are available year-round. Most of the mangos sold in the United States are one of six varieties: Tommy Atkins, Haden, Kent, Keitt, Honey and Francis. The Tommy Atkins mango is the most widely grown commercial variety imported to the United States. “This variety is sought out by many retailers due to its red blush characteristics,” says Angela Serna, communications manager for the National Mango Board. “The color and large size make it appealing to consumers.”

However, the Tommy Atkins is not considered the sweetest mango, as it tends to be fairly fibrous, which bothers some eaters. The season for Tommy Atkins mangos runs from about March to December — there is often a lull in inventory in August.

“My favorite mango variety is the Haden,” says Sergio Palala, general manager of Splendid by Porvenir LLC, a San Bruno, CA-based fruit importer and distributor of several types of fruit, including mangos from one of the largest private growers in the world. “Haden has good color and it’s rounder. It almost looks like an apple. It has a sweet, tangy taste and not as much fiber as you might see in a Tommy Atkins.”

The Haden is a medium to large mango with bright red-skin colored with yellow and green. A sprinkling of small white dots on the skin is normal. Peak season is March through May, although there may be some availability October through December.

Kent mangos are oval in shape and have green skins that may have red highlights. They have a sweet, juicy flesh with a limited amount of fiber. Their peak availability is December to March, then again from June to August.

The Keitt mango is another large, green-skinned variety. Although it may develop a pink blush, it will stay green even when fully ripe. It has a very sweet flesh with limited fibers. Keitts are available primarily July to September, with some availability in June and October.

“In recent years, we have seen continued popularity growth of the Palmer mango variety,” says Serna. “This mildly sweet variety, with limited fibers, sources primarily from Brazil.” The skin is burgundy with green or orange highlights; it is only available in August, September and October.

The Honey mango, originally known as the Ataulfo, is available from March to June. It is a small, yellow mango with a very sweet flavor and small seed. “It has to be golden-orange before it’s ready to be eaten,” says Rod Diaz, marketing director for Diazteca Company, a 60-year-old grower, fruit packer and shipper in Rio Rico, AZ. The skin will also appear slightly wrinkled. “This variety has grown tremendously in the past 15 years,” says Diaz, “so it’s a good one to watch for when they’re in season.”

“It’s been a very robust start to the season, so it looks like you’re going to see a bumper crop out of Mexico,” says Chris Ciruli, chief operating officer for Ciruli Brothers, an importer of fresh fruits and vegetables from Mexico that is headquartered in Nogales, AZ. “I think you’ll see a highly promotable product line of mangos from May all the way until the end of July.”

Is It Ripe Yet?

Some mangos develop a reddish hue when they’re ripe. Because mangos come in so many colors, it can be challenging for novice buyers to determine when they’re ready to eat. “Our strategy has always been to communicate to consumers, ‘Don’t judge a mango by its color’ and ‘Squeeze gently to judge ripeness,’” says National Mango Board’s Serna.

Shoppers can use their experience with other fruits, such as peaches or avocados, to determine if mangos are really ripe. A ready-to-eat mango should have about the same amount of give.

It is possible consumers won’t be able to find a ripe mango when browsing the display. “With mangos, we hear all the time retailers want them hard as a rock,” says Splendid’s Palala. Unripe mangos can be ripened by placing them in a warm location. Placing them in a paper bag speeds the ripening process.

The National Mango Board provides complimentary point-of-sale materials retailers can use to help consumers understand how to select and cut mangos.

Mangos must be handled and stored with care. The fruit will begin to suffer below 54 degrees F. “Our best advice is ‘Treat me like a banana,’” says Serna. “Everyone in produce knows you shouldn’t refrigerate bananas. Tropical fruits simply don’t like cold temperatures. Stores should hold and display whole mangos at room temperature to avoid chill damage.”

Once a mango is ripe, it can be refrigerated whole for up to five days once placed in an air-tight container.

“Mangos are an impulsive buy,” says Balls Foods’ Harle. “They need to be displayed up front. Get them in front of consumers with attractive price points.”

“Forward-thinking markets are doing massive displays with a lot of fruit and, in some cases, multiple varieties of mangos,” says Ciruli with Ciruli Brothers. Even putting two different types of mangos – a yellow Honey and a round Haden, for example – can boost sales.

“Themed mango displays are always a big hit,” says Serna. Choose a recipe and have employees build a display with all the ingredients needed to make the dish, including mangos. “This will help shoppers pick up everything they need for the recipe,” she says. “While it sounds simple, this strategy leads to colorful displays that draw shoppers in by telling a story and offering a solution.”

When mangos aren’t placed front and center, the best place for them is with the seasonal fruit. “A summer 2015 store display test showed merchandising mangos adjacent to stone fruit had a 45 percent net impact on mango volume and dollars compared to the control panel, in which mangos were displayed in the tropicals set,” says Serna. In the winter months, she recommends placing them near the oranges.

Other mango sellers still advocate for displaying them with tropicals, especially when there’s a larger promotional program in place. “There are possibilities to cross-merchandise mangos with other tropicals and make it a more complete package for consumers,” says HLB Specialties’ Ocampo. “Put papayas, pineapples, coconuts, mangos and other tropicals together and have a tropicals week. Especially in the winter, when it’s really cold and snowy in the north, it’s an opportunity to say, ‘Yes, we know it’s cold here, but the tropics are still there. Even if we don’t have the weather, we have the fruit. Bring the tropics to your house.’”

Ocampo also recommends regularly culling poor-quality mangos from displays. “It’s always important to have a good-looking mango on the shelf,” he says. “Sometimes I’ve seen stores that are not active enough in removing product that is past its prime. As with any other item, if you see fruit that is not fresh or is wrinkled, you might be worried to buy the fruit.”

“We do a lot of sampling and passive demos of mangos,” says Bristol Farms and Lazy Acres’ Savidan. Both companies include mangos in their cut fruit program, allowing them to sell to people who are nervous about choosing and cutting them.

“My advice is to get the message out the fruit is useful not just as a fruit, but as an ingredient,” says Splendid by Porvenir’s Palala. “Mangos can be eaten plain or put in salads and desserts. They’re great for meat and fish because they’re tenderizers.” The National Mango Board has recipes and tear-off pads available to retailers who want to share recipes with shoppers.

Another idea is to cross-merchandise fresh mangos with value-added products. “There’s been an onslaught of mango-flavored salsas, drinks and fruit bars,” says Harle. “You’re seeing mangos come up in many different items, and at some point, customers want to come right to the source. Any time you can have fresh and processed food displayed at the same time, it’s always a good fit.”

One of the most important things stores can do is ensure they have plenty of ripe, quality mangos to sell customers. “To make the future of mangos more successful, you have to have ripe and ready-to-eat fruit,” says Ciruli. “That’s where the industry is moving, and that’s where it needs to go to get consumption numbers up. For the consumer to pick up that mango, it’s got to be good. Every consumer’s experience has to be a good experience.”

Diazteca’s Diaz recommends trying more ready-to-eat mangos as opposed to those that are hard and still need to be ripened. “Time this with peak season and peak brix level, and do an aisle promotion. Provide some samples so people can test the flavor,” he says.

Diaz also recommends using a brixometer, also known as a refractometer, to measure the level of sugar suspended in the fruit’s juice. This gives an indication of the sweetness of the product. Markets in Europe and Japan are doing this already to ensure their customers receive the best-tasting fruit available at the time.

Mangos are one of the most popular fruit of the world. With more education and exposure, Americans are likely to join the legions of fans across the globe and buy even more from their favorite grocery stores.

According to John Savidan, produce director for Bristol Farms and Lazy Acres’ Market, a California chain of 14 stores, the two most common mango questions are: “How do you pick a ripe mango?” and “What’s the easiest way to cut one?”

Savidan coaches store managers to share the National Mango Board’s method for slicing and dicing a mango: First, stand the mango up on a cutting board with the stem end down. “Run the knife through the top and down one side of the seed; what is called the ‘cheek’ will come off,” he says. “Do the same thing on the other side. Cut the mango like a checkerboard.”

Once that’s done, push the skin up to cut off the cubes with a knife, or leave it as-is and scoop out the cubes.