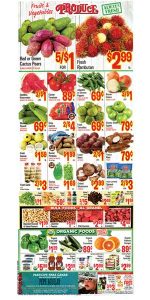 It is well known that Wal-Mart is struggling to find an effective way to deal with deep discounters such as Aldi and Save-A-Lot. With Lidl preparing to roll out stores across the country, this threat both to Wal-Mart’s image as the Low Price Leader and threat to the top and bottom line is substantial.

Perhaps not as fully recognized, though, is the degree to which Wal-Mart’s pricing ceased to provide competitive advantages against ethnic grocers, specialty stores and, in many cases, mainstream supermarkets.

In this, the 29th iteration of The Produce Business Wal-Mart Pricing Report, we head to Simi Valley in California. Part of the Los Angeles metropolitan area, home to the Reagan Library, and often considered one of the most conservative towns, politically speaking, in America. This is also the city in which the challenge Wal-Mart is facing crystalized in our Pricing Report.

Once again, we add our usual caveats. This is a study of produce pricing only. So, theoretically, a store could have high produce prices and low meat prices or vice versa. And this is true of any department in the store. Still the results from Simi Valley are striking.

In our main market basket of 53 items, both Jons International Marketplace, an independent chain with about 15 stores that prides itself on extensive micro-marketing for each of its locations, and Vallarta, a Latino independent with more than 45 stores, came in less expensive than Wal-Mart. Jons was 13.44 percent under Wal-Mart, and Vallarta, a whopping 28.44 percent under Wal-Mart. Ralphs was insignificantly more expensive at 1.32 percent over Wal-Mart’s pricing. Only Vons was significantly more expensive than Wal-Mart, coming in at 21.75 percent over Wal-Mart’s pricing.

Now, in studying pricing in this market, we observed Wal-Mart appeared to be trying to avoid direct price comparisons on many items. So, it adopted pricing by the “each,” rather than the pricing by the pound, which was standard in the marketplace. When this is done, our practice is to adjust the pricing to make it comparable. So, if one store sells an item at .50 cents each, and another sells it for $2.00 a pound, we calculate how many units are in the pound and adjust accordingly.

This is generally accurate but can pose problems as sizes, etc., can vary. Just to double check, we also ran our market basket on a more limited 38 items — as opposed to 53 items in our main market basket. We did this by eliminating any items on which we had to do adjustments of prices by the each and by the pound.

Was our first market basket off base? It seems not. In fact, Jons and Vallarta both compared even more favorably with Wal-Mart when it came to pricing, with Jons beating Wal-Mart by 19.76 percent and Vallarta coming in a full 30 percent under Wal-Mart’s produce pricing. Ralphs was a tad less competitive at 2.04 percent over Wal-Mart. Vons also inched up a bit with its numbers showing at 22.18 percent over Wal-Mart.

In this Los Angeles commuter town, Wal-Mart is beaten solidly by the micromarketing independent, Jons, clobbered by the Latino independent Vallarta  and basically in a draw with Kroger’s division, Ralphs.

None of this is good news for Wal-Mart, beaten solidly by the micromarketing independent, clobbered by the Latino independent and basically in a draw with Kroger’s division, Ralphs. And Vons is just at the line where we found stores get in trouble, when their prices are 20 percent over Wal-Mart.

Yet this is still not the whole story. It is our policy to report prices based on what any consumers can get when walking in a store. So discounts offered to, say, loyalty club members, don’t show up in these comparisons.

In this market, both Vons and Ralphs offer significant discounts to loyalty card holders. Card holder prices applied to our 53 item basket mean that Ralphs actually comes in 1.94 percent below Wal-Mart. Vons is the most aggressive of the studied chains with cardholder discounts, and when these discounts are applied to our main basket, Vons came in at 15.32 percent over Wal-Mart’s prices — which may be higher than Wal-Mart, but much more in range.

So where does this leave Wal-Mart? What is the proposition the Wal-Mart brand is making to consumers? Wal-Mart abandoned its “Always Low Prices” slogan a decade ago. But even its current “Save Money. Live Better” motto is grounded in the idea that shopping at Wal-Mart will save you money. At least in fresh produce, in the Simi Valley, that is not true.

As The Produce Business Wal-Mart Pricing Report next rolls out to our 30th city, we will test the proposition that Wal-Mart is prepared to allow itself to be underpriced, and we will look at what that means for the future of this chain, for American retailing, and for the produce vending community.