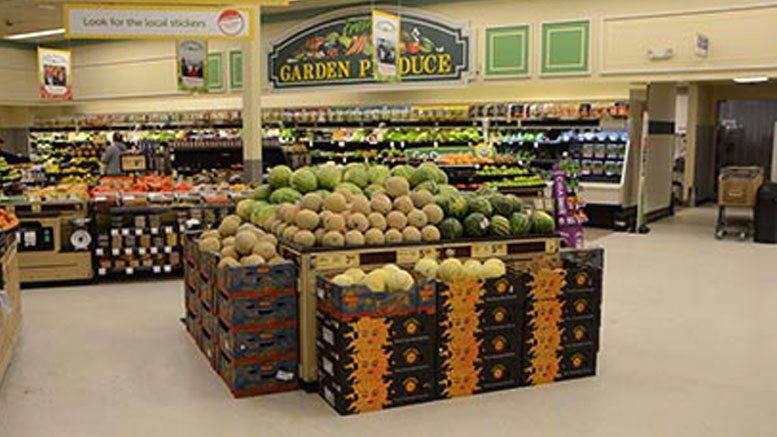 How three supermarkets in Alaska compete for produce share

Subsistence is still a way of life on Kodiak Island, Alaska. Shoot a moose and the monetary equivalent of this food will qualify you as a “producer” and eligible for USDA funding for a pilot “High Tunnel” project that can increase the local produce growing season by up to three weeks. That’s huge, considering summer lasts about two months or less on this island located in the Gulf of Alaska, some 200 air miles southwest of Anchorage.

Kodiak is the second-largest island in the United States, measuring just more than 3,500 square miles. Like the first and third, the “Big Island” of Hawaii and Puerto Rico, respectively, the only way for people or products to reach Kodiak is either by boat or plane.

Yet, there are three important differences between Kodiak and its big siblings when it comes to food. First, there is little commercial agriculture on Kodiak, even with the USDA’s High Tunnel project owing to the sub-polar climate and extremes in daylight throughout the year. Second, Kodiak is off-the-beaten track of commercial shipping lanes, with the closest major commercial port in Seattle more than 1,200 nautical miles away. Third, demand is relatively low. Some 6,000 people live in Kodiak’s only city and another 8,000 in its six outlying rural villages. This compares to a population of 150,000 in Hawaii and more than 3 million in Puerto Rico. It’s no wonder that fishing, hunting and foraging for wild-growing beach greens and salmonberries remain a part of the local diet.

Yet, today Kodiak residents are accustomed to fresh produce like their fellow consumers in the lower 48. Not only items like Alaskan-grown root crops, but also name brand bagged salads, varietal apples, fresh-cut fruit and vegetable trays, internationally sourced produce and tropical fruits and vegetables, even in the heart of winter.

These fresh foods became staples thanks to Safeway opening a supermarket here in 1987, a Walmart store in 1999, and before that, a small retail market called Cost Savers that since became affiliated with Costco. Like the weather, the business climate can be harsh for retailers. A fourth major supermarket, Food for Less, one of 31 stores operated by the Anchorage, AK-based, Alaska Commercial Co., a division of the largest retailer in rural Alaska, the North West Co., closed its doors after more than 20 years. A company press release cited problems maintaining a profitable operation.

Who is Kodiak’s food shopper? More than 85 percent are Caucasian, Asian/Pacific Islander or Hispanic, with the remainder mostly native Alaskans or Alutiiq, according to the Kodiak Community Profile and Economic Indicators, published in 2013 by the Kodiak Chamber of Commerce. Many of the first ethnic groups can trace their roots to Russia’s settlement in the 18th century, or to family members stationed here in World War II, or are one of the more than 1,000 active duty personnel and their families who live and work at the U.S. Coast Guard Base Kodiak, the island’s largest employer.

Many of the Asian/Pacific Islanders and Hispanic groups had parents and grandparents who came to and still do work in the island’s large major fish processing plants. Kodiak is ranked as one of the Top 3 largest fishing ports in the United States in terms of the economic value of landed catch, and employs more than one-third of Kodiak’s adult population. It’s also home to many of the Discovery Channel’s Deadliest Catch boats. Add to this that the average family household income was $65,605 according to 2010 U.S. Census data, and one gets a clue to the palate and spending power of Kodiak’s shoppers.

Safeway, Walmart and Cost Savers, plus a couple of small ethnic C-stores, compete for Kodiak Island’s share of the stomach. Each gets the majority, if not all, of its produce by barge from Anchorage late on Mondays and Wednesdays. Safeway also gets shipments on Fridays, plus has the ability to fly product in if necessary.

Most of the produce comes via distribution centers from the parent companies in Anchorage or Seattle, or from Anchorage-based fruit and vegetable wholesaler, Di Tomaso’s Fruit and Vegetables. Retailers resoundingly say their major supply chain concern is produce freezing rather than warming up while being loaded and unloaded along the way.

Everyone shops here, as it is the island’s only large, full-service supermarket. Owned by Safeway, Inc., of Pleasanton, CA, the produce department looks likes one of its lower 48 counterparts in terms of size, décor, refrigerated display space and produce variety   especially when shelves are full on Tuesdays and Fridays. During the rest of the week, there are definitely “holes” in displays thanks to bi- or tri-weekly deliveries and high customer traffic.

Major brands take center stage at this store. For example, in the week leading up to the Fourth of July, there were waterfall displays of Dulcinea mini watermelons, a wall of more than two-dozen Fresh Express bagged salads and freestanding displays of Chiquita bananas. There were also several store or Safeway Farms-brand items, including a 4-pound bag of Navel oranges packed in bins by Fowler, CA-based Bee Sweet Citrus’, steam-in-bag vegetables, and chopped salad kits.

Both refrigerated and unrefrigerated organic fruits and vegetables had their own sections segregated from conventionally grown produce. Total organic SKUs easily numbered more than 100, with selections spanning from eggplant, celery stalks and radishes to bananas, pears, plums, peaches, onions and tomatoes.

Cross-merchandising is everywhere at the Kodiak Safeway. In the produce department, lemons and oranges are displayed with Concord smoothie mix; Tajin seasoning mix with apples; and shelf-stable spray bottles of butter with free-standing RPC’s holding fresh corn. Outside the department, bananas are cross-displayed by the milk and ice cream sections, and bags of avocados in the chip aisle.

The cost advantage for shoppers is EDLP (everyday low pricing). There’s just one row of fresh produce at the Kodiak Walmart. It measures two RPCs wide by five RPC’s long and 3 rows of RPC’s high. Fruit, such as bagged and bulk apples, oranges and cantaloupe are displayed on one side, with vegetables on the other. There was also a large bin display of watermelon.

Walmart offers an “Alaska Bush Program,” where customers can either fill their carts in-store or order products by phone, fax or email and have it shipped to remote locations like Kodiak’s outlying villages. A Walmart manager says this is only for non-perishable items, not fresh produce. Remote customers can have their purchases flown in by the town’s floatplane pilots for $1 per pound. So, if bananas cost $1.19 per pound in-store, the consumer will pay $2.19 per pound to have them flown in.

Hoping to do its part in the locally grown sector, Kodiak Walmart recently donated $2,000 to the KSWDC (Kodiak Soil and Water Conservation District) Community Garden Project. Project organizers hope to encourage the cultivation and consumption of locally grown foods.

For an entire store that is the size of Safeway’s produce department with a warehouse-like décor, the volume and variety of fruits and vegetables draws a constant crowd of shoppers. There’s easily 24-foot double-decker refrigerated shelf space with everything from lettuce, mushrooms, cabbage, green onions and tomatoes to grapes. Three adjacent free-standing 6-foot-long tables set end-to-end hold boxes of nectarines, apples, oranges, cantaloupe and kiwi.

There are name-brands like Andy Boy romaine hearts, Grimmway carrots and Earthbound Farms’ organic spring mix, as well as Kodiak-grown fresh rhubarb. Shoppers here range from singles and families to owners of isolated fishing and hunting lodges who are buying in bulk for their chefs to prepare gourmet meals for vacationers.

Cost Savers attracts a lion’s share of shoppers with its fresh produce sales on Tuesdays and Thursdays. Sale items of boxes and bins are set outside or inside the storefront depending on the temperature. Hot prices means unadvertised specials travel swiftly by word-of-mouth and supplies don’t last long, even when items are limited in quantity per customer.

One such sale in April included nearly at-cost white corn in husk at 2/$1, 15-pound bags of Alaska-grown potatoes at $4.99 each, Granny Smith apples at 3/$1 and small watermelons for $2.99. Cost Savers is privately owned and operated by a local couple. Forging a buying agreement with Costco, a 600-plus unit warehouse retailer headquartered in Issaquah, WA, has enabled them to reap the savings that they pass on to their customers.

Precious Flowers & Gifts, located about a mile away from Cost Savers and two miles from Safeway and Walmart, has a huge banner outside with the words “Fresh Vegetables.” Inside this combo convenience store and floral shop are boxes and crates displaying a variety of Asian vegetables, such as bitter melon and Japanese eggplant. Owners say they use Pacific Rim Distributing in Seattle to source these items and have done so due to customer request.

Some Kodiak residents started to order organically grown fruits and vegetables online from companies like Full Circle in Seattle. Once customers sign-up for membership they are able to order produce packed in four different sizes. The “Seed” box offers 15 to 20 servings of produce for $36.50. The “Harvest” box features 45 to 55 servings for $62.25. Shipping to Kodiak costs an additional $49 per box. The boxes are delivered to five pick-up locations on Kodiak each Tuesday.

The biggest challenges to growing fruits and vegetables in Kodiak are the cold soil temperatures and cool winds. On the other hand, the largest green light is the 14 to 16 hours of daylight during the summer months.

In an effort to improve health through the consumption of locally grown foods, as well as contribute to the island’s food sustainability and security, the USDA Natural Resources Conservation Service, in cooperation with the KSWCS, started a three-year pilot program in 2010 to help pay for high tunnel greenhouses on Kodiak Island for private individuals who meet certain land and production ability qualifications.

The pilot has been successful and extended. To date, there are 52 high tunnels averaging 600 square feet in size in operation on the island. The steel-framed, seasonally erected high tunnels have a plastic sheet that warms both soil and air. Crops grown are typically fast-growing, cool-season types like rhubarb, peas, kale and broccoli, as well as warmer season tomatoes, melons and cucumbers.

High tunnel growers make up several of the 20-plus vendors at Kodiak’s Saturday morning’s Farmer’s Market, with the remainder selling value-added foods like game jerky and salmonberry jam. This volume of island-grown fruits and vegetables doesn’t jeopardize sales in the produce departments at Safeway, Walmart or Cost Savers. However, it is helping to cultivate Kodiak Islanders’ year-round appetite for fresh produce, a hunger that 50 years ago was an unfulfilled a luxury in this cold climate.