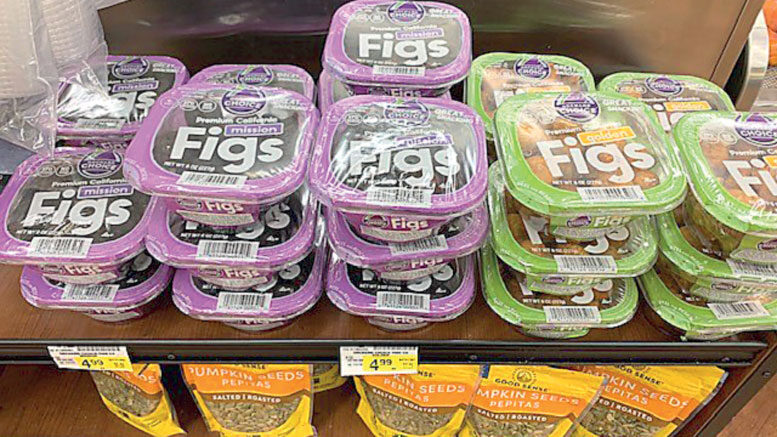 Nutritional benefits and versatility make dried figs a year-round staple. Plus, they have a long shelf life and minimal shrink, contributing to a solid margin for retailers.
PHOTO COURTESY VALLEY FIG GROWERS

Versatile dried figs are like Switzerland: They get along with everybody.

Dried figs are a solid addition to any retail produce department, bringing health benefits and a trendy popularity that can lure shoppers. The fig is complex and contradictory: It’s sweet, yet tangy; meaty, yet melts in your mouth; chewy, yet smooth. And there’s something artisanal about dried figs — perhaps it’s their Old World roots — that brings something old and yet new to the shopping cart.

It’s been several years since Firmenich, the world’s largest privately owned company in the fragrance and flavor business, declared fig the 2018 flavor of the year, but its slow rise doesn’t show signs of stopping. Increasing consumer emphasis on health and snacking is pushing the trend.

“There continues to be strong demand for dried figs,” stresses Karla Stockli, chief executive, California Fig Advisory Board, Madera, CA. “In fact, the California fig industry continues to plant new trees to keep up with demand. The upcoming harvest is expected to yield beautiful, plentiful fruit.”

Franciscan missionaries from Spain brought figs with them when they founded missions in California. Fresno eventually became the center of California fig production, and is currently the only region in the U.S. where figs are grown on a large commercial scale.

A fig grower-owned cooperative, Valley Fig Growers markets its products both domestically and internationally, and retail brands include Orchard Choice and Sun-Maid brands, with Blue Ribbon as its foodservice and industrial brand.

“Figs are gaining lots of interest as consumers and ingredient or industrial firms alike are discovering flavor, and the terrific nutritional profile that we have,” Cain explains.

“And we pair beautifully with so many different items,” she adds. “We’re like Switzerland: We get along with everybody. You can find us in chocolates, you can find us in beer. It’s just a very companionable product that adds a lot to whatever dish it’s used in.”

Another plus to putting dried figs on your shelf? They have a two-year shelf life, and there’s very little shrink, says Cain. “We don’t spoil and we don’t take a lot of hands-on activities, so that saves on labor within the produce department.”

Although there is a sales spike in the year-end holiday season, don’t ignore potential sales the rest of the year. “A lot of cultures cook with dried figs and we’re excited that they are becoming more and more accessible and popular in the culinary realm,” says Matt Jura, vice president, San Joaquin Figs Inc., Fresno, CA.

There are many opportunities throughout the year to promote dried figs, agrees Stockli.

Figs fit perfectly in the health and wellness space, particularly in winter, when people are looking for healthier snacks and ingredients, she says.

Still, those nutritional benefits and versatility make dried figs a year-round staple because they provide a good source of fiber (just three to five figs provide 5 grams of dietary fiber per serving); they’re rich in antioxidants; a good source of magnesium, calcium and potassium; they’re fat-free, sodium-free and cholesterol-free, and, Stockli adds, gluten-free.

Next comes spring, which is full of celebrations like Easter and Mother’s Day, and figs are a celebratory fruit that can dress up any occasion.

“Summer, of course, is when we see fresh figs in market, and displaying dried alongside fresh helps deliver the message that dried and fresh can be interchangeable in many recipes and that dried are available year-round for a fig fix anytime,” she adds.

Finally, fall kicks off the holiday season where there are endless opportunities to promote figs as an ingredient or special gift, Stockli says.

From fall through the winter holiday season, Valley Fig Growers typically sees a nice spike in sales, and promotes more vigorously during those time periods “because that’s what a lot of traditional consumers are looking for,” Cain notes.

Still, she adds, “we’re bringing new customers into the fold through our recipes and education about nutrition.”

Dried figs can also be promoted year-round for snacking, or as a plant-based sweetener.

Cross-merchandising dried figs with cheese is very effective, says Stockli. Pairings and cross promotions often include items for the perfect charcuterie board — California-grown figs and cheese with honey, nuts, rosemary, apricots or lavender, for example. “Adding a homemade California fig wine jam puts it over the top!”

“We encourage dual placement, not only in produce, but throw a couple containers in the deli cheese cases,” Cain says. “That will help additional sales.”

Valley Fig Growers has started to use QR codes, so consumers can just click and go directly to either purchasing on the company’s site or find recipes or more nutrition information, she adds. It also puts a lot of effort into its social media activity, including reels of recipe preparation, to give consumers ideas of what to do when they get the product home.

Bulk dried figs are a mainstay of the category, but branded products are here to stay. “We’ve traditionally excelled in bulk,” San Joaquin Figs’ Jura says, “but we’ve focused more in recent years on our own retail line.”

Now, the top-selling San Joaquin Figs items are its crowns and tubs, with tubs seeing strong year-over-year growth, he says. He’s also excited about a new product, Fignuts, which is a fig- and nut-based bar made with fruits and nut ingredients the company grows or are supplied by companies in close partnership with San Joaquin Figs. It’s currently available in three flavors — Chocolate Brownie, Cherry Pie and BerrySplosion — and are promoted by two characters called “Bubb Nut” and “Lil Fig.”

Packaging is available in a range of offerings. Valley Fig recently modified its packaging from a full clamshell to a peel-reseal container with recyclable plastic, which provides greater product visibility as well as branding. It also sells product in ready-to-display cases that can be stacked on the floor, which saves labor and time for shelf stocking, and makes it easy to merchandise dried figs outside the produce department.

Retailers can see a bump in profitability with dried figs because there are decent margins with little to no shrink, she emphasizes.

The bottom line is, “people really love our product when they see us on the shelf,” says Cain. “We’re not always on the grocery list, so it’s important that retailers put us in places where consumers can find us.”