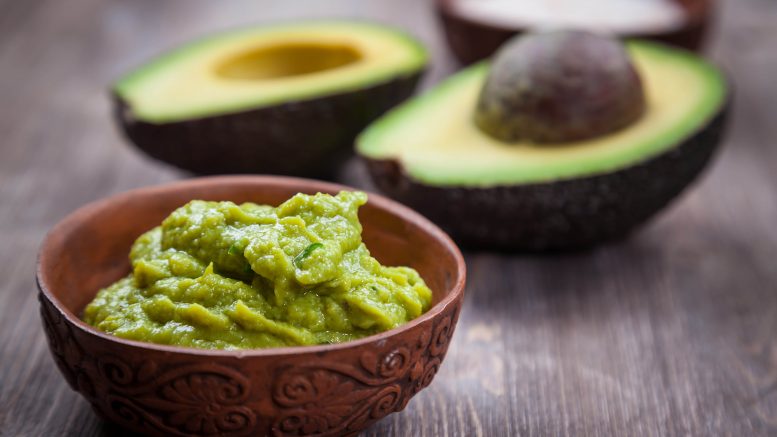 With prepared meals hitting the right note with more consumers, industry experts report a growing number of grocery produce departments are stocking up on items such as prepared guacamole.

“Providing prepared guacamole or prepared salad is a good way for produce departments to participate in this trend,” says Samantha McCaul, marketing manager at Concord Foods, LLC, in Brockton, MA. Guacamole is one of the fastest-growing snack and party items in the United States, and by offering prepared guacamole — or guacamole mixes — in produce, stores are providing consumers with fast, simple and delicious meal solutions, she says.

Guacamole sales reached $525 million — following a 13 percent increase in the past year — and sales have nearly doubled in the past five years, according to the Total Food View report published by Chicago-based Nielsen.

Year-over-year growth rates in sales have been around 20 percent annually for the past four years, says Jonna Parker, principal for the Fresh Center of Excellence at IRI, Chicago. “This is fueled by an increase in average number of items selling and improved sales velocity each year. More and more stores are stocking fresh guac consistently, and consumers continue to buy in increasing rates,” observes Parker.

So, what’s the lure of prepared guacamole? Araiza says consumers are drawn to prepared guacamole because of factors such as year-round availability, its healthy attributes and great taste, not to mention it comes in packaging ideal for grab-and-go, which is important to groups such as Millennials.

Avocados and guacamole are ideally positioned to meet the needs of health-conscious consumers looking for a wholesome snack, especially as they become increasingly aware of the many health benefits.

Nielsen’s associate director, Matt Lally notes: While avocados offer plenty of versatility from avocado toast to slices on a salad or sandwich, “it’s undeniable that one of the most popular usages is for the creation of guacamole. So, it’s not a surprise the number of guacamole items continues to expand as both retailers and manufacturers capitalize on this trend.”

“It’s steady and selling, but I think more people are buying avocados and making guacamole,” notes Goldman, produce director. Part of the reason might be due to the stores’ locations, where the availability of space, due to costs in the city tends to be more limited, he theorizes.

Araiza notes, “Pace of sales aside, shelf life for prepared and packaged guacamole, if assembled in the back at the store level, probably is four to five days.”

Goldman says once consumers get prepared guacamole home, they probably don’t wait long to finish off at least most of it. “Maybe someone’s having a party at their house on a Saturday and shops on Monday. They’ll put it in the fridge and open it on the spot without having to worry if they (avocados) ripen at the right time.”

“A Boom In Retail”

Over the past couple of years, prepared guacamole has been ripe for other companies, such as Starbucks, to jump into the action. “They now have the single serve guacamole, which is a great success,” notes Araiza. In fact, virtually every retailer across the country is now introducing the convenient, single-serve packages.

“The Safeways and Krogers are now going to prepared guacamole, and we virtually see a boom in retail on guacamole now in the produce department.” It’s a significant transition from the past, “when you’d only see our product in the deli section.”

No matter who’s leaping into the fray, cross-merchandising or promotion is key to moving the snack.

Cross promoting Del Monte Fresh Guacamole with chips, salads, sushi, and vegetables — such as celery, carrots, and broccoli — are a great way to increase sales, notes Christou. POS signage should always inform consumers about the different usage options and occasions for the product, and recipe cards can be placed directly next to the product in order to drive sales.

Concord Foods’ retail pouches should be displayed with avocados in produce as a convenient solution for consumers, explains McCaul.

Goldman tries to position prepared guacamole more with the grab-and-go items — except for events such as the Super Bowl or Cinco de Mayo — when he opts instead to incorporate it into an avocado display.

Prepared guacamole, which requires refrigeration, can be merchandised with pre-cut vegetables, such as carrot sticks and sliced red peppers, or other tie-in produce items, says McCaul. Additionally, signage should tell consumers where the item was made and offer meal ideas.

And, yes, size matters. Prepared guacamole is very popular in individual 2-ounce cups, 8-ounce tubs, and 15-ounce tubs for bigger gatherings and parties, especially in round tubs and cups, notes Araiza, who also notes round tubs and cups are among the most popular trends in packaging.

But no matter the packaging, Christou notes that sometimes people just need their prepared guacamole fix – even if they don’t know it until the moment they lay eyes on it in the store. “The presence of fresh guacamole in the produce section, and its convenience as a lunch or snack item, has made it part of the daily consumer shopping experience,” he says.

To help further punch up the eating experience, “at least with our product, you can mix it with a variety of things; it’s very versatile, as far as the use of avocado products, shakes and hand-held spreads,” says Calavo’s Araiza. “It’s not just guacamole anymore.”

Nor should it be assumed the average customer knows all there is to know about prepared guacamole. With that in mind, retailers also help juice sales by acquainting consumers with the snack.

Although sales have been spiking throughout the years, observes McCaul, “we see spikes at occasions beyond the Super Bowl [like March Madness, summer parties, football season and Christmas and New Years celebrations.]” No matter the occasion, “Innovation wins out,” notes Araiza. “Companies have to adapt to what people want — mainly freshness and healthy living. The groups we’re targeting are under a lot of time pressure because of work and exercise. We think our product fits in nicely.”