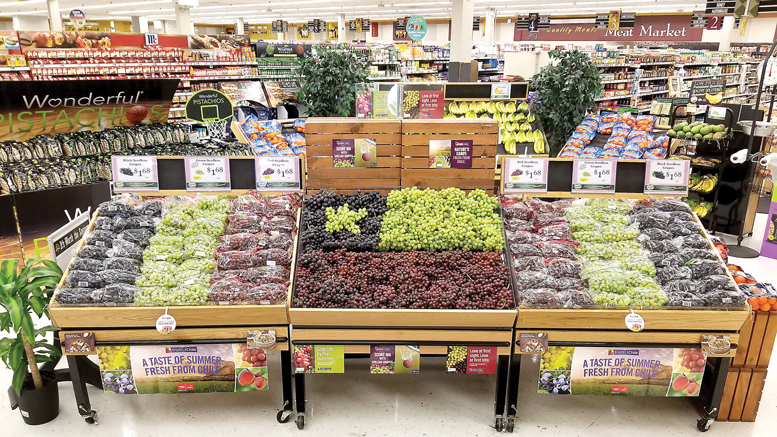 Grapes are one of the oldest cultivated fruits on our tables, dating back some 6,000 to 8,000 years. Today, these botanical berries prized for their sweetness and crunch rank second to apples among the Top 10 fruit categories by dollar sales, according to FreshFacts on Retail, Year in Review, by the Washington, D.C.-headquartered United Fresh Produce Association (UFPA). More specifically, grapes generated $3.3 billion in retail sales and enjoyed a 70% household penetration in 2019. Two major factors driving the grape category’s success is better tasting varieties available on a year-round basis.

“Both domestically and with imports, I do think the overall eating quality of grapes has moved forward in the last five to 10 years,” says Earl McGrath, produce director for Freshfields Farm, in Orlando, FL, which has a second location in Jacksonville, FL. “Most months of the year now you can find a crisp, sweet grape.”

Here are six ways retailers can keep grape sales on a role:

California produces nearly all the table grapes sold in the U.S. during the domestic season from May to January. Chile, followed by Mexico and Peru, are major exporters of grapes to the U.S. from December through April for South America and April to June for Mexico.

“As we look at grape production from a high level, we see that more regions of the world are now producing grapes, and with greater post-harvest technology and practices, are experiencing longer shelf life, allowing for greater travel time and, thus, more global reach. All of this combines for greater competition in the market than ever before,” says Andy Kampa, general manager of sourcing, for Robinson Fresh, headquartered in Eden Prairie, MN.

Closer to home and more immediately, Kampa adds, “Once we enter the Central Valley (California) season in early July through December, we anticipate less production from previous years. However, the transition from old, lesser yields-per-acre varieties to new varieties has allowed for most production numbers to be maintained, even though acreage had gone down. Overall, we are expecting a normal weather year, and with it, normal quality.”

2. VARIETY IS THE SPICE OF SALES

Typically, there is a red and a green seedless grape and at least one seeded grape offered in both the domestic and import seasons at Freshfields Farm. “That seems to be a nice balance for most customers. Red seedless varieties are easily our most popular individual grape,” says McGrath.

Red varieties in recent years have led sales. However, with new green grape varieties, the distance between red and green types in terms of the overall percentage of sales has been nearly closed. For example, red grapes represented 48% of grape category sales, white/green grapes 46.1% and black/blue grapes 5.9% according to Nielsen Total U.S. data for the 52 weeks ending April 11, 2020, as provided by New York-headquartered Nielsen.

“There are lots of new table grape varieties in all shapes and colors now that are really changing the industry,” says Jeff Simonian, president of sales and marketing for the Simonian Fruit Co., in Fowler, CA.

Retailers are taking advantage of this something-for-everyone assortment.

“We offer a full variety of grapes,” says Randy Bohaty, produce director for B&R Stores, an 18-location chain based in Lincoln, NE, which operates under the Russ’s Markets, Super Saver, Apple Market and Save Best Foods banners. “The Cotton Candy grapes are so popular now, they are like the Honeycrisp of apples.”

“We’re in a demand-exceeds-supply situation for Cotton Candy, however, will have an increase in supply this season. While there won’t be promotable volumes, there will be an opportunity for more retailers to be able to carry this variety,” says Jim Beagle, The Grapery’s partner and CEO. “Gum Drops are new for us, and we’re increasing production. For Moon Drops, it’s been a pleasant surprise how positive the response from consumers has been.”

As in the domestic season, there has been a huge shift in various grapes coming out of Chile.

There is a big question as to what role specialty-type grapes will play in the market.

“Cotton Candy captured the imagination of the category over the last six to eight years,” says John Pandol, director of special projects for Pandol Bros. Inc., in Delano, CA.

Is it best to sell grapes by color or varietal name—or some of both?

“We believe that promoting red, green and black seedless is the way to go,” says Ray England, vice president of marketing for the DJ Forry Co. Inc., in Reedley, CA. “There are so many newer varieties now, especially red seedless varieties. Do they each have their unique characteristics? Mostly yes. But are these characteristics profound enough to separate themselves as a stand-alone variety that is special enough to market and create brand equity at retail? Not many I don’t believe. I think you can count the ones that can on one, maybe two fingers.”

Indeed, most shoppers (86%) look for a specific type of grape, likely red or green seedless, adds Robinson Fresh’s Kampa, citing proprietary company research. “Meanwhile, only 4% of shoppers say that grape variety is most important in their decision to purchase. In fact, shoppers were more likely to recognize fake varieties over real grape varieties based on a recent propriety survey. In short, highlighting simple names like red, green and black paired with grape characteristics are more important then showcasing the grape variety name.”

That said, Robinson Fresh’s proprietary research did find that nearly 85% of shoppers said a ‘Grape of the Moment’ campaign is appealing and would increase the likelihood of impulse purchases.

“This can especially apply when introducing a new variety. Display information about the featured variety’s flavor profile, firmness, shelf life and storage tips, recipe or snack ideas, and other interesting or relevant notes,” says Kampa.

The most popular pack style for grapes is bags, according to Megan Schulz, director of communications for the Giumarra Cos., headquartered in Los Angeles.

“Bagged and packaged varieties make up most U.S. sales of grapes, according to Chicago-based IRI’s data. However, we continue to see customer and consumer interest in clamshells increase in demand,” says Robinson Fresh’s Kampa.

Fixed-weight packaging, both in bags and clamshells, has witnessed an increase, says Kampa. “This has allowed retailers and non-traditional retail, such as convenience stores and drug stores, easier entry into the produce market.”

“We typically merchandise our grapes in and around our berries in the front of our store. We like to start our produce shopping experience off with sweet items like grapes that have broad appeal to almost all customers,” says Freshfields Farm’s McGrath.

In terms of mix, make sure the selection offered is “well-rounded”, recommends the Grapery’s Beagle. “Carry the high-volume sellers, the unique, high cost, organic and all the basic colors as well as what appeals specifically to the demographics that shop a particular store. The challenge is having enough choices to entice a broad range of shoppers, while not so many choices that there’s an overload.”

There is a huge opportunity to increase black seedless grape sales, according to the DJ Forry Co.’s England. “They’re usually the tag along color to round out the grape offering. However, I believe there is a mindset that black grapes don’t sell and, therefore, store level displays reflect that notion, kind of a self-fulfilling prophecy. If a store sells 120 cartons of red grapes, 85 cartons of green grapes and 15 cases of black grapes in a given week, it seems like the huge upside is with black grapes.”

The display method as well as retail price point can influence purchases, as grape sales are highly elastic.

6. POSITION GRAPES AS AN INGREDIENT

Capitalize on the spike in convenience-style shopping by building an endcap display that gets shoppers started thinking about using grapes as an ingredient in a meal, versus just simply a snack item, suggests Robinson Fresh’s Kampa. “Include all the ingredients for a fun dish like a grape and gorgonzola pizza on the end cap. You can do this virtually, too, through switching up the keywords associated with items so other products that are part of a recipe can appear for ‘suggested’ or ‘recommended’ items.

Go beyond grouping ingredients together by providing recipes in the form of printed or digital cards, Kampa adds. “When shopping online, make it easy for consumers to add grapes and other ingredients on the recipe card to their digital shopping list for ease of transitions. From a recent primary survey we conducted, we found that 71% of shoppers who shop online do not use an app that remembers their shopping list, but they still desire this.”

Promotional pricing for grape sales is the most-used tactic both in hi-low and EDLP (everyday low price) formats, according to Pandol. “Prices below 99 cents per pound creates resistance among customers. ‘It’s too cheap; something must be wrong with it,’ they think. As a grower, I can’t sell grapes at 99 cents a pound, why should a store? There is also an equally out of control problem of pricing regular grapes far too high. Other than a high shrink specialty, nothing needs to be over $3 a pound. We see stores running grapes at $3.49, so when they go to 89 cents it looks more extreme. Consumers don’t have a good idea of what grapes should cost, because they see such a wide range of pricing in the store.”

Research by the California Table Grape Commission, based in Fresno, CA, reveals that when grapes are promoted at a discount on the front page in a feature ad, it is twice more effective than just an in-store special. This is reinforced by the fact that 51% of primary shoppers used printed circulars to help them prepare their shopping lists.

“Both regional and national chains are embracing digital coupons, and we have supported them for all Chilean fruits. We like how measurable it is, as we can see exactly how many coupons were downloaded and how many were redeemed. It’s also easy to test different things, whether different offers, different regions, etc.,” says the CFFA’s Brux.

Beyond price, grapes are ripe for seasonal promotions.

“Summer has the benefit of several holiday get-togethers with Memorial Day, Father’s Day, Fourth of July and Labor Day, moving right into the back-to-school time. All these holidays back-to-back in the summer months result in an increase of 45% from May to June. Also, the back-to-school time corresponds with the peak domestic season, and August to November is when retail volume sales increase by 60% over other months,” says Robinson Fresh’s Kampa.

Winter can be a strong time for grapes, too, Kampa adds, as the South American import season offers a reliable supply and many of the new aged varieties grown in California to create a consistent year-round eating experience.