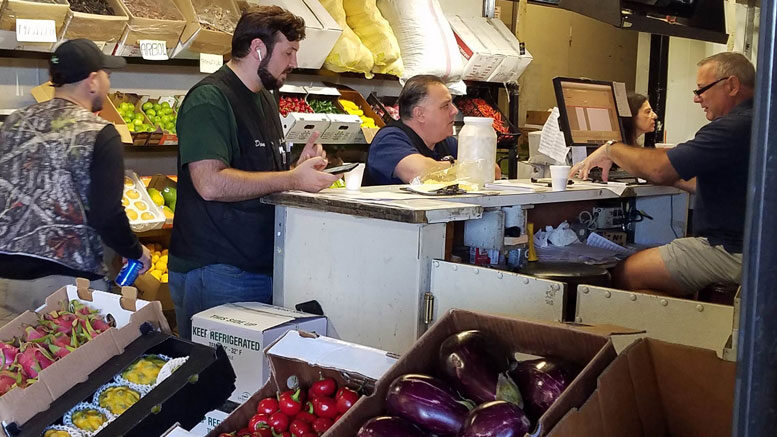 Tough times led customers to dig deeper into the benefits offered by regional and local wholesalers, such as J. Bonafede, one of the wholesalers on the New England Produce Center.

Boston’s size and diversity represent an enormous food market opportunity. According to the 2020 U.S. Census, Greater Boston’s population of 4.9 million is 10th among U.S. metropolitan statistical areas. As Boston has grown, so has its diversity and it now ranks as a majority-minority city. Data from the 2020 census shows that 55.3% of Boston’s population are minority groups, including Black, Asian American and Latino.

The city’s size and diversity leads to variety in retail and restaurant formats, says Gene Fabio, president of J. Bonafede, a distributor at the New England Produce Center (NEPC). “We have small to medium retail stores and large chains, there are mom and pop corner stores and a lot of ethnic stores.”

The mix in customers helps support wholesalers. “We don’t have all our eggs in one basket,” says Steven Piazza, president of Community-Suffolk. “We’re about a third retail, a third smaller wholesalers and a third foodservice. This variety helps keep our volume steady during the ebbs and flows of business.”

The dynamic of Boston’s diverse population leads to a high competitive retail environment. Boston has long presented an abundance of retail formats, such as powerhouse regional chains, independents and neighborhood stores. “The Boston area still has strong customers including Stop & Shop, Hannaford and Roche Bros., as well as a lot of smaller stores,” says Piazza.

Smaller neighborhood retailers further complement the marketplace. J. Bonafede’s trade caters significantly to ethnic customers. “We, of course, sell to all, but the largest group of our traders and retailers include the Hispanic, Asian, Indian and other ethnic stores,” says Butch Fabio, proprietor.

Over the past couple of years, wholesalers have revamped some models to accommodate retail business. Coosemans Boston has built consistent, but focused, retail business, according to Maurice Crafts, managing partner. “It consists mostly of repacking large cases of product into smaller cases for our retailers who can’t move large volumes but want the product on their shelves,” he says.

Though Baldor caters to the restaurant industry, the company does sell some retail, according to Glenn Messinger, vice president of branch operations for Baldor Specialty Foods including Philadelphia, Boston and Washington, DC. “We service some small independent retailers and a few small chains,” he says, “but most of our business is foodservice.”

Boston’s population continues to support a thriving foodservice sector. Boston boasts over 3,000 restaurants, according to the Boston Discovery Guide, and Messinger reports the Boston foodservice business is looking great. “We’ve seen a lot of new restaurant openings,” he says. “The foodservice scene in Boston is thriving. There are some really great new restaurants.”

Restaurants seem to be getting busier, observes Crafts. “It’s hard to get a good Saturday night reservation at anyplace worth its salt in town,” he says. “I predict the foodservice segment growing nicely in the next decade. If you look at the city from a distance, you see cranes and buildings going up from East Boston to Allston and everywhere in between. It seems like new restaurants are opening up all the time.”

The coronavirus pandemic was difficult, but over the past year and a half, the foodservice business has been strong, says Mitchell Randall, corporate chef for Mistral in Boston, MA. “After not being able to get out for so long, people are taking advantage of it. We’re doing well and are very pleased with how busy we are.”

Boston’s foodservice sector is driven by variety and consistency, according to Messinger. “We have such a broad product line, our customers know we’ll have the product they need,” he says. “We try to be a solution for customers and have answers for them. We show them things they didn’t even know they needed, but that will be better for them.”

Supply chain issues do affect restaurant business. “We’ve had to pivot,” says Randall. “If the quality’s not there, we may have to change the item on the menu. It’s something we’ve had to deal with a lot. And we’re also dealing with a lot of shorts.”

Companies such as Baldor strive to help foodservice customers meet supply issues. “Due to our relationships with our customers and our suppliers, we are consistent,” says Messinger. “Our produce and service allow customers to do whatever they want in their restaurant. They can be innovative and showcase the products because we have them and they can get them.”

Mistral Plates Up The Finest With Elegance

In Boston’s stylish South End, fine dining is bustling at Mistral. Based on French Mediterranean cuisine with a New England spin, the acclaimed restaurant from celebrated chef/owner Jamie Mammano serves up high quality ingredients, including produce, in a sophisticated approach.

“We wouldn’t have a menu without produce,” says Mitchell Randall, Mistral corporate chef. “It’s the basis for everything. We have some staple items such as Dover Sole that are always accompanied by spinach. Roasted duck is always served with a mushroom risotto.”

The elegant main dining room seats 140 comfortably, with décor reminiscent of Provence. The large arched windows, warm wood tones and golden highlights evoke a warmth and sophistication that foreshadows what is to come on the plate.

The restaurant is owned and operated by Columbus Hospitality Group. “The group now owns six restaurants, but Mistral is where it all started,” says Randall.

Almost all the restaurant’s dishes have some type of produce component. “The cold dishes are more fully produce, but other appetizers all include one produce ingredient, even if it’s a garnish,” says Randall. “The entrees all feature a produce side or complementary ingredient.”

The classic, yet innovative, French cuisine starts with pairing the right produce with the protein. “We begin by selecting the protein of the dish and then look at the available produce offering for inspiration,” says Randall. “We use produce to balance the plate. We change our menu quarterly to accommodate the various seasons. And, if we have to change the menu or dish to accommodate the best produce at any given time, then we do.”

Randall explains the produce components help add seasonality to the menu. “For example, in late summer during tomato season, we’ll feature tomato salads and tomato bisque,” he says. “Then, going into fall, we transition into a squash soup and incorporating apples into the menu.”

Mistral relies on its produce suppliers to procure items in line with its cuisine and philosophy. “We work closely with our suppliers to see what’s available and then we go from there,” says Randall. “We spend around $11,000 to $12,000 per week on produce. That stays pretty consistent throughout the seasons.”

The restaurant sources principally from Baldor and Sid Wainer & Son. “We always look for quality and freshness first,” says Randall. “We never base our purchase solely off pricing. If the quality is there, but we need to spend a bit more money for it, then we do.”

Randall explains Baldor does a fantastic job of having many of the unique items the restaurant needs, but Mistral also source some other specialties directly from producers. “We get some of our microgreens directly from Boston Microgreens who grow specifically for us,” he says. “A lot of our cultivated mushrooms come from Joyberry Farms, a mushroom farm in Mason, NH. However, our wild mushrooms are sourced mostly from Baldor and Sid Wainer.”

The desserts promise as decadent an experience as the rest of the menu. A classic Crème Brûlée delights with plump raspberries and crunchy. Chocolate Profiteroles sit with Pistachio Ice Cream in a dark chocolate sauce and pistachio croquant. A Warm Fuji Apple Tart is complemented by vanilla ice cream and caramel sauce, and the rich Valrhona Chocolate Torte contrasts perfectly with simple, yet sweet, vanilla bean ice cream.