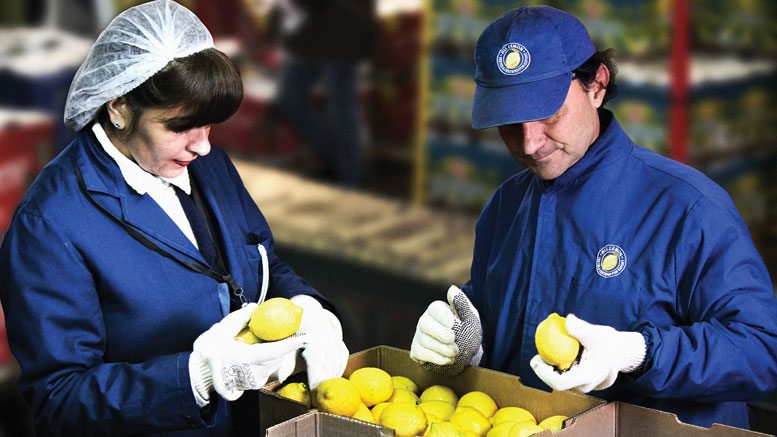 Photos Courtesy of All Lemon 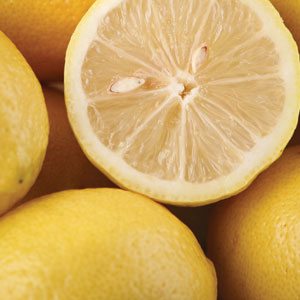 Organization of the country’s major lemon grower-shippers into a single body responsible for quality control and promotion figures to help the exports reach higher levels. -Photos Courtesy of All Lemon

When consumers shop for blueberries in a U.S. supermarket during a brief two-month period in the heart of every fall, chances are very good they are eyeing counter-seasonal product grown and shipped from Argentina.

“Argentina has become the largest supplier of blueberries in its window,” says Fernando Skiarski, chief executive of Berries del Plata, Buenos Aires, Argentina. “So availability in the October-November window plays a big role, but the markets also recognize the good flavor of our berries over those coming from Peru, South Africa and other countries that compete for that same window.”

There are also defined times of the year when pears, garlic and other produce items reach U.S. supermarkets from Argentine shippers that have come to play a vital role in filling gaps when domestic product is not available.

These counter-seasonal shipments account for enough to earn Argentina a spot near the bottom of the Top 10 fresh fruit and vegetable shippers to the United States, based on findings from the government’s recent U.S./Argentina Trade Facts section of the Office of United States Trade Representative (USTR’s Office of Administration is responsible for all of the administrative and management services for the proper functioning of the Agency).

“U.S. imports of agricultural products from Argentina totaled $1.5 billion in 2015, our 25th largest supplier of agricultural imports,” according to the USTR. “Leading categories include: wine and beer, $348 million; fruit and vegetable juices, $165 million; other fresh fruit, $147 million; essential oils, $117 million; and other vegetable oils, $112 million.”

Lemons could soon be added to the list of Argentinian imports under a proposed USDA rule ending a 15-year ban imposed, because citrus growers in California and Arizona are concerned the fruit could bring with it crop diseases and pests, including Mediterranean Fruit Fly.

The comment period on the proposed rule, which would allow lemons from northwest Argentina produced and inspected under specified protocols, ended on August 10.

For nearly half the year, lemons are already among the most plentiful and heavily promoted produce items from Argentina.

“The harvest and export of lemons is from March to August/September,” says Martina Delacroix, communications specialist for All Lemon (the seal of quality for the country’s lemon exports), the certified brand created by 16 producers of Argentine lemon exports. 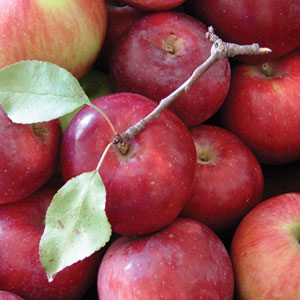 “Argentina, especially the province of Tucumán in the north of the country, is the largest producer of lemons in the Southern Hemisphere. Tucumán produces 1.4 million tons of lemons each season.”

Organization of the country’s major lemon grower-shippers into a single body responsible for quality control and promotion figures to help the exports reach higher levels.

“The average of production is almost the same every year, although there were seasons that had less amounts,” says Delacroix. “Since the creation of All Lemon in 2010, Argentine lemons are better known as a quality product.”

Four months begin a window when importers look to this South American country to fill the need for fresh garlic.

“The Argentine garlic season usually starts in December (depending on the weather) and ends in March,” says Tony Biondo, category manager for A.J. Trucco, Inc., New York. “Our first shipment usually arrives into the U.S. at the end of December or beginning of January. Garlic can be stored for months at the right temperature.”

Argentina, with more than 40,000 metric tons from 2006 through 2013, trailed only China and Mexico in garlic shipments to the U.S., according to USDA statistics.

“Argentine garlic has been an import of ours for many years,” says Biondo. “It’s very good quality garlic and is needed during the winter months, because there is no fresh crop of domestic garlic during this time.”

The end of the year is also the season for the relatively brief blueberry harvest in Argentina.

“Normally, the season for blueberries from Argentina is from the beginning of October to the end of November,” says Skiarski from Berries del Plata. “Some years, there’s some limited availability during September.”

Blueberry shipments figure to continue increasing, after a brief pause caused by the weather last year.

“Volume will increase compared to last season because of last year’s decline in weather conditions,” says Carla Ginobili, manager of the Argentinean Blueberry Committee, Buenos Aires, Argentina. “In addition, there is a slight increase on the hectares planted and those getting into full production.”

The Argentinean Blueberry Committee includes growers who ship more than 80 percent of the exports.

“The general consumption increase worldwide is good news, highlighting countries such as Germany, and, of course, conventional big consumers such us the U.K. and United States, whose consumption growth levels are surprising at more than 35 percent a year,” says Ginobili.

Berries del Plata, one of the grower-shippers that helped start the blueberry committee, expects to see years of double-digit growth.

“I expect the volume to start growing at a 10 percent yearly rate for the next three or four years,” says Skiarski. “The volume growth is slow. During the past four years the volume was steady at around 15,000 tons. This was due to the macro economical situation in the country that made Argentinian exports non-competitive. Since the government change, some of those variables changed and the growers gained some competitiveness.”

“Argentine garlic has been an import of ours for many years. It’s very good quality garlic and is needed during the winter months, because there is no fresh crop of domestic garlic during this time.” 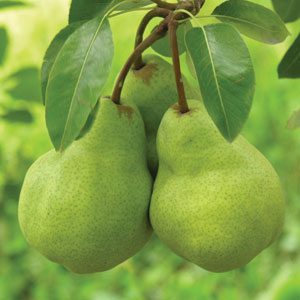 “Our spring, from March to May, is the season for pears from Argentina,” says Michael D’Arrigo, vice president of D’Arrigo Bros., based in New York. “There have been different products at different points in time, however pears have been the most effective in making headway in the U.S. market.”

The well traveled trail of pears from Argentine orchards to U.S. supermarkets has become a staple for both countries.

“The United States remains a reliable market for Argentine apples and pears,” according to the USDA’s Fresh Deciduous Fruit Semi-annual Apples, Pears, and Table Grapes, published in May of 2016. “Pear exports are revised up 330,000 metric tons, in line with calendar year 2015 official estimates.”

To a certain extent, U.S. importers are sometimes competing with their counterparts around the globe for a piece of the Argentine pear harvest.

“Exporters ship to other markets within the world market. We are not the only country receiving product form Argentina,” says D’Arrigo. “The United States is actually receiving less pears from Argentina each season due to the domestic growers becoming larger and producing higher quality product.”

While most Argentine fruits and vegetables are marketed largely as available during a certain time slot, lemon growers are among those working to develop a brand name based on their country of origin.

“There has been a big difference in quality control,” says Delacroix. “So, in the past few years, All Lemon became a reference of Argentina’s best lemon because every detail, from the natural quality of the lemon to the very professional companies behind them, is coordinated to serve the clients and bring them what they want and need.”

“The wide thermal amplitude we have in our production areas is clearly favorable for the accurate balance
between acidity and sugars, which enables the good taste of the fruit.”

These growers believe they have fruit with a distinctive mouth appeal that comes from the local growing conditions.

“One of the key features that defines Argentinian lemons is the rich juice content,” says Delacroix. “This quality is based on the unique agro-ecological conditions in which lemons grow, that are typical of the foothills in Tucumán and other small regions in the Argentine Northwest area: fertile and loamy soils, with subtropical springs, summers and autumns, hot and extremely humid.” 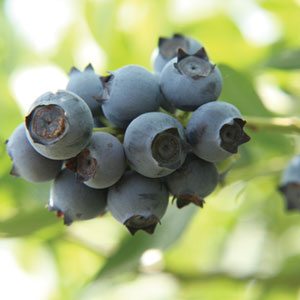 The blueberry growers also worked to build their brand in the six years since forming their committee.

“The good taste of Argentinian blues is a fact,” says Ginobili. “The wide thermal amplitude we have in our production areas is clearly favorable for the accurate balance between acidity and sugars, which enables the good taste of the fruit,” she says.

“What’s more, Argentina transports more than 90 percent of all blueberries grown at this time by plane which results in a fresher and more flavorful fruit,” adds Ginobili. “The time between harvest and delivery is drastically reduced and the fruit’s sweet, plump and juicy characteristics are maintained.”

There are also fruit growers from one productive region of the country working to develop a larger supply of organics.

The data from the USDA Fresh Deciduous Fruit Semi-annual Apples, Pears, and Table Grapes (presented by the Foreign Agricultural Service) reports: “According to private sources, 10 to 12 percent of the total production of fresh apples and pears in Alto Valle of Río Negro and Neuquén Provinces is certified as organic, and 10 percent is exported as organic. This region concentrates 59 percent of the total organic fruit harvested area in the country.”

Despite this supply of organic fruit, most Argentinian pears are sold largely based on their availability as fresh fruit.

The same is true with garlic, as the Argentine shippers do not attempt to compete with the effective promotional campaigns of their California counterparts.

While there are only a few emerging Argentine brands, there are important slots for produce from the Southern Hemisphere.